Celebrating Digimon’s 25th anniversary in style, BANDAI NAMCO has released Digimon Survive, a somewhat reboot and re-styling of the usual Digimon video game formula. This time around, changing up the genre to a hybrid of a visual novel with tactical RPG elements throughout. A new direction, which at first seemed strange considering the nature of Digimon, typically being a monster-collecting and turn-based battle style, that takes a risk with a different approach. At first, I was slightly disappointed to hear that the bulk of Digimon Survive would be mostly a visual novel - as this isn’t a genre I generally gravitate towards - but at the same time, highly intrigued to see how this would play out…

Right off the bat, from the title screen, promotional material, and character designs, this is a much more mature outing for Digimon. The language used, visuals and story themes such as death (yes, actual death!) are much darker than in previous instalments. Digimon has always been seen by some as an edgier Pokémon, however, it still had a childish charm and target audience. Whereas with Digimon Survive, whilst there are still many funny and childish moments, it is definitely aimed at those who have grown up with the franchise and more mature audiences.

You play as Takuma Momozuka, who is on a school trip with his classmates. He and a group of other students and locals get lost and find themselves transported to a world similar to their own, but the big difference is that there are now these ferocious creatures - both good and bad - that we know as Digimon. It's important to highlight that Agumon and co. are not referred to as Digimon or Digital Monsters at all throughout Digimon Survive. There are no Digivices for these you would assume ‘Digi-destined’ to use. The Digimon in this world are as real as Takuma and his friends are. 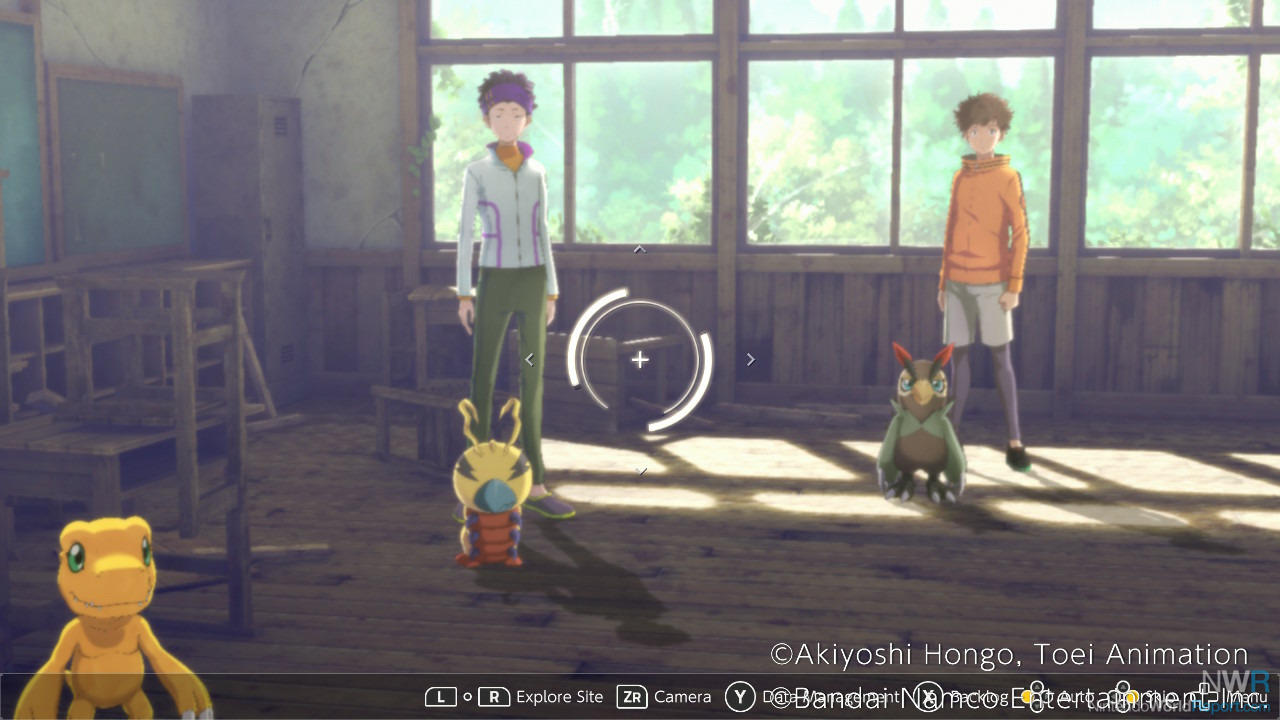 How Digimon Survive sets itself up, makes this one of, if not, the most accessible Digimon game to date for newcomers to the franchise or those who have never heard of Digimon. You needn’t know anything about Digimon itself to be immersed in this story and characters. For Digimon veterans and fans of the series, you’ll be happy to know that virtually all of the season one originals such as Agumon, Tentomon, Patamon, etc. are all present and obtainable in some way or another. However, some of the popular second season/movie Digimon are not - most notably Veemon and Terriermon.

The bulk of your time with Digimon Survive is with its visual novel side, with the split to be around 70/30 in favour of the visual novel, there is a lot to read and a really great story and excellent characters to immerse yourself with. The opening hour or so is completely text-based and establishes the main characters and relationships, builds the world and the catalyst to the story you will then spend the next 25+ hours in. Each character in Digimon Survive is unique and interesting, all with their own quirks and personalities. You can tell that a lot of thought went into each and great writers were on staff, as not a single character feels two dimensional, or left out of the plot. Each and every one experiences some form of character development and you grow to genuinely care about them all - which makes those darker moments mentioned that much harder to deal with.

The story is split into 12 chapters which will branch off around three-quarters of the way through depending on your karma rating - moral, wrathful and harmony. Meaning that there are three different endings for you to play through, as well as a secret fourth route that can be unlocked once one of the three prior paths has been completed. That turns this 25+ hour run into a far longer one should you wish to see it all!

Your narrative choices don't only affect your karma, it also affects your affinity and relationships with the other characters in Digimon Survive. This is important because the higher you can increase your affinity, the higher boosts you can get in battle from them and their partner Digimon. Your karma also plays a part in defining what your partner Digimon, Agumon, evolves into - so every choice you make matters in more ways than one. 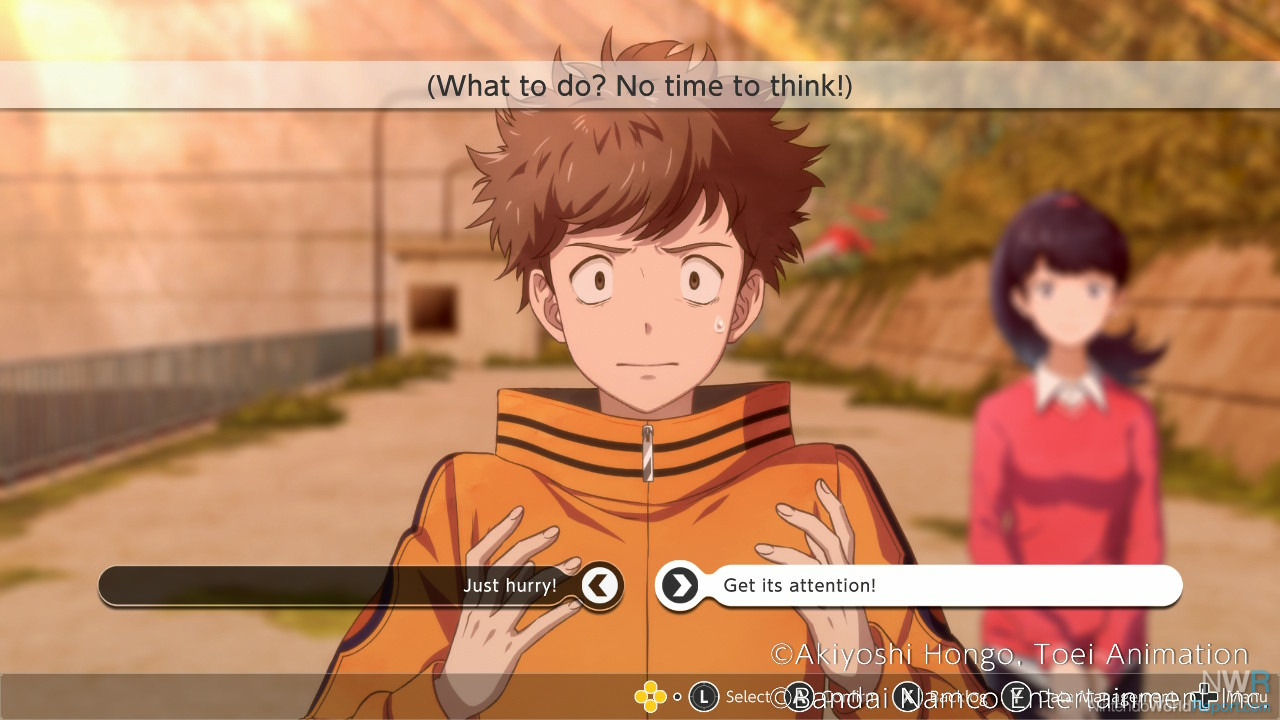 A huge concern of mine was the pacing, given that the split between reading and battling seemed so far and few between, the opening hour or so does feel a lot longer than it actually is. For some, this will be a deterrent and usually, the action of Digimon Survive is saved for the latter stages of each chapter. Meaning that most of the tactical gameplay is bunched towards the end for the climactic fights.

When you aren’t reading or listening to the dialogue and story of Digimon Survive, you’ll find yourself in battles against Digimon foes. The battle system takes place on an isometric grid, where at the start of each battle you choose your party - this usually includes a specific member of your team by default (whoever the current plot is focused on) and whoever you choose to include up to a certain amount dictated at the start. On this grid, you can do several actions with each Digimon, with the fastest on the battlefield going first - which can sometimes be your enemy!

Your choice of actions when battling includes move, attack, item, talk, evolve, and end turn. Each Digimon, depending on their movement attribute, can move a certain number of spaces. Naturally, the higher the attribute, the further they can travel in a single turn. All Digimon have a basic attack and a special attack. Each special attack will cost SP, so you have to be careful when and when not to use these special moves, such as Agumon's Pepper Breath. I never found myself running out of SP due to move usage. I did however come close to running out due to the way evolution works. With evolution (again, the game does not refer to this as Digivolution), partner Digimon are always in their base Rookie form and you must physically choose what they evolve into during battle. The higher level you evolve them to (Champion, Ultimate, Mega) the more SP that is drained each turn as a result of the action. You can de-evolve during another turn should you wish to reserve some SP. This adds a nice tactical layer, as you may want to save your stronger form for when it really matters. Digimon in your party that are not partnered with a human require an item to evolve, which means that they will remain in their higher form and unable to de-evolve, so make sure you are 100% sure when digivol- I mean, evolving them. 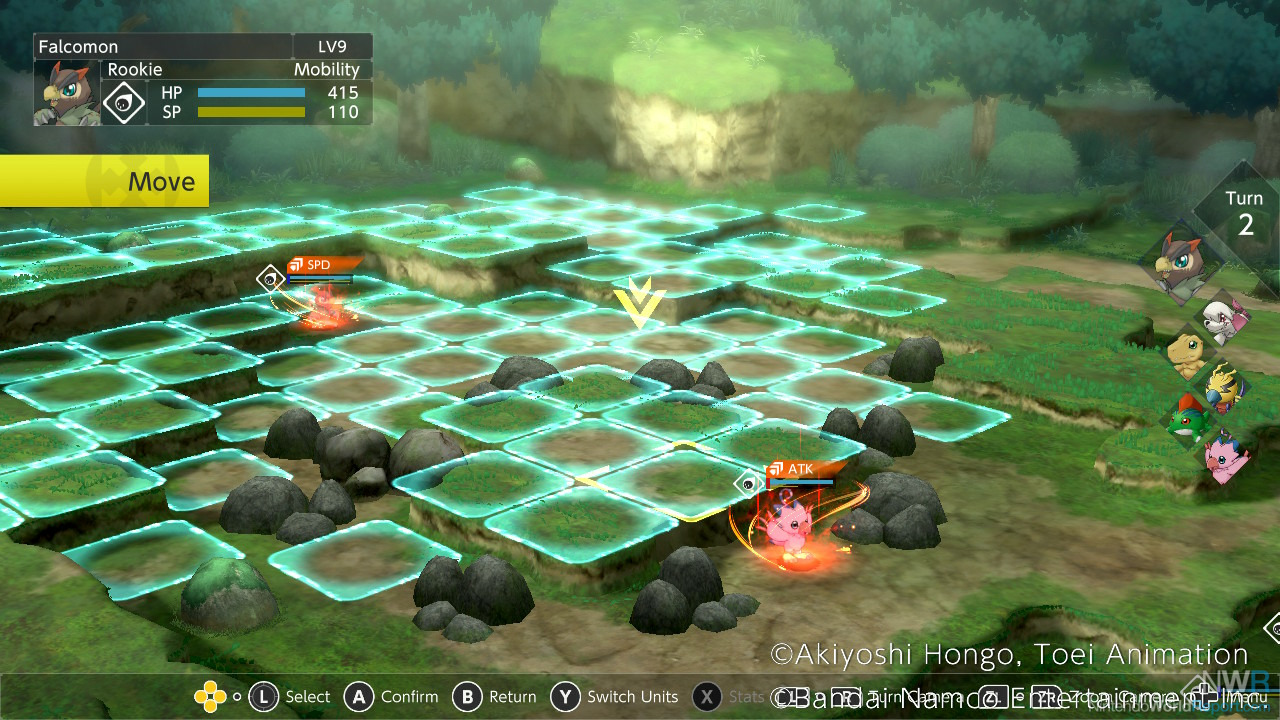 The talk function is the most interesting and useful action in Digimon Survive. Certain allies have special abilities that can increase stats, max out movement, and also heal other Digimon. When you talk to each other, or even your own partner Digimon, these benefits will affect them and usually, these buffs will stay for the entirety of the battle! Takuma, who you play as, can hype up a Digimon, and boost all of their stats. Conversely, if you talk to selected opposing Digimon, you can “woo them over” and use this to convince them to join your party! Make sure to answer those questions correctly, otherwise, this will anger them and then their stats will all increase. This feature is great as it gives all Digimon, even those that can be seen as minor grunts, a personality - especially given that all Digimon do have personalities and almost all are able to talk (sorry Kunemon!).

The battle system overall is great. I feel as though it’s a little light on the ‘tactical’ side, and wish that there were some deeper mechanics involved. On top of this, the battle animations are very slow, but thankfully this can be sped up by holding A or sped up permanently in the settings menu.

During the moments between the core narrative and battling, you’ll be able to explore your current surroundings to help progress the story and interact with characters, where you can strengthen your affinity. Whilst in this explore mode, each area also has a Free Battle location. This area will place you in a battle with random opponents, where you can grind your team and level them up, or recruit foes to bolster your unit number. Quick tip - max out your battle speed in the settings, and select auto-battle in the start menu during Free Battle should you wish to grind quicker. The Free Battle Digimon are usually considerably weaker so this poses no risk to your team. 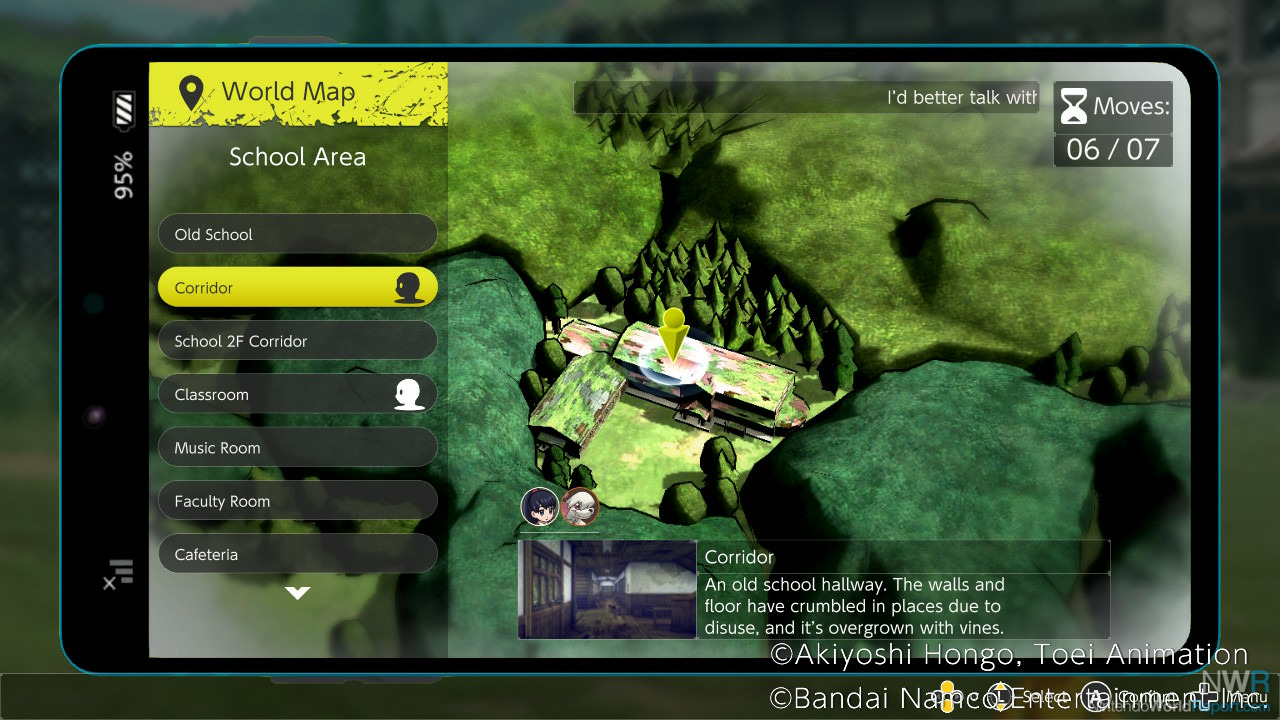 Sometimes in this explore mode, you’ll be prompted to use your smartphone camera to uncover invisible items or clues. These are represented as glitches - similar to when you have a poor signal on a video call. These glitches feel like the only remains of the ‘digital’ aspect of Digimon and are typically used to uncover useful items or progress the story.

As most of your time is spent with the visual novel side of this game, I was initially concerned that visually, this may be quite dull and repetitive. I couldn’t have been further from the truth! Both the character design and Digimon sprites are designed beautifully. Each and every character has an abundance of different expressions and reactions and they are all so full of life and fitting to the dialogue. They transition between each other seamlessly, and although my visual novel experience is lighter than some, if all visual novel characters were designed as crisp, thorough and unique as Takuma and co. I might give more a try!

On the other hand, I was slightly disappointed by the design of the sprites in the tactical battles. They look fine, and are chibi-esque versions of the characters and Digimon, but there is some missed opportunity for better visuals and animations. I mean, there is HD art of everything in the game already - when hitting a final move or evolving to a Mega form, or if there is a critical hit, an additional HD animation or even a cutscene would be nice. It just feels a little bland at times, which is odd, because I wouldn’t have guessed it would be the other way round. 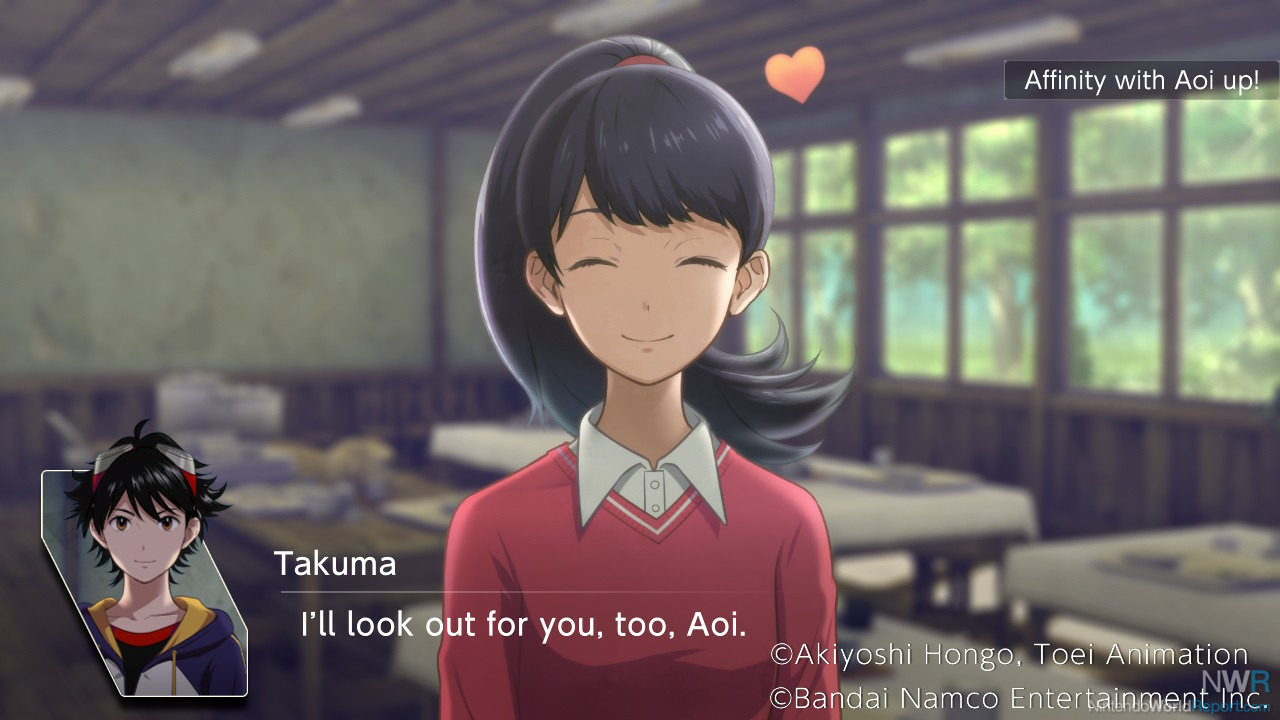 Scattered throughout Digimon Survive are fully animated cutscenes, and these look as if they have been taken from a high-budget anime. The standard of anime nowadays is high, and these animations are on par with the best. If the characters and narrative of Digimon Survive were adapted into a full series or movie, I’d be one of the first in line. If that does become a reality, they already have a masterful composer in Tomoki Miyoshi, who created a stunning and dark atmosphere, pairing perfectly with the narrative.

Digimon Survive took a risk in its gameplay, presentation and narrative, and for me, it paid off. It genuinely feels like a new era of Digimon is upon us. A more mature, dark, and ferocious Digimon that could see the start of a truly great visual novel RPG hybrid series. This won’t be for everyone, and I completely understand if you pass on it, however, if Digimon is your jam or visual novels are, and you have plenty of time to sit and soak in this wonderfully written narrative - you’re likely to strike gold with Digimon Survive.

Hmmm... might be time for my first ever Digimon game!