There’s nothing half-shell about this upbeat, nostalgia-fueled brawler.

Since they crawled out of the sewers in the mid-to-late 1980s, the Teenage Mutant Ninja Turtles have appeared in multiple cartoon series, movies, video games, and toy lines. Without a doubt, the Turtles are a “toyetic” brand, and I remember owning dozens of their action figures, vehicles, and playsets growing up. The last console game to star Raph, Mikey, Don, and Leo was 2017’s Teenage Mutant Ninja Turtles: Mutants in Manhattan, which released to poor reviews overall. Fortunately, Tribute Games’ Teenage Mutant Ninja Turtles: Shredder's Revenge is very much a redemption arc, and it’s sure to provide hours of multiplayer brawler entertainment as you bop along to an infectious soundtrack.

While there isn’t much in the way of story across its 16 total stages, Shredder’s Revenge will feel intimately familiar to anyone who’s played Turtles in Time, from the boss theme to grabbing Foot Clan and throwing them into the screen. A compact world map allows you to drive the Turtle’s Party Wagon from stage to stage and even to visit NPCs that you unlock. In most of the levels, you can find hidden collectibles by smashing open boxes, and returning all of the collectibles in a set to their rightful owners yields experience points to power up your squad.

In Story mode, each of the seven characters has their own progression meter that allows them to reach level 10, opening up new perks at each level. These include extra health points and special meters, and even new moves. And let me tell you, for a side-scrolling brawler, there sure are a lot of ways to beat things up. In addition to standard punch combos, there are mid-air kicks and dives, uppercuts, sliding attacks, special moves, and at least three different throws. Better still is that each character feels unique since their weapons have different ranges and speeds. Mikey’s nunchucks can’t reach all that far, but his special move sees him flailing them out in a wide arc that greatly exceeds their normal range. Raph’s special move turns him into a whirling dervish of sai-flavored mayhem, and you can even move him a little bit while he’s mid-spin. April, Splinter, and Casey Jones all feel different, and it’s enjoyable just to try out every character and see all their unique animations. 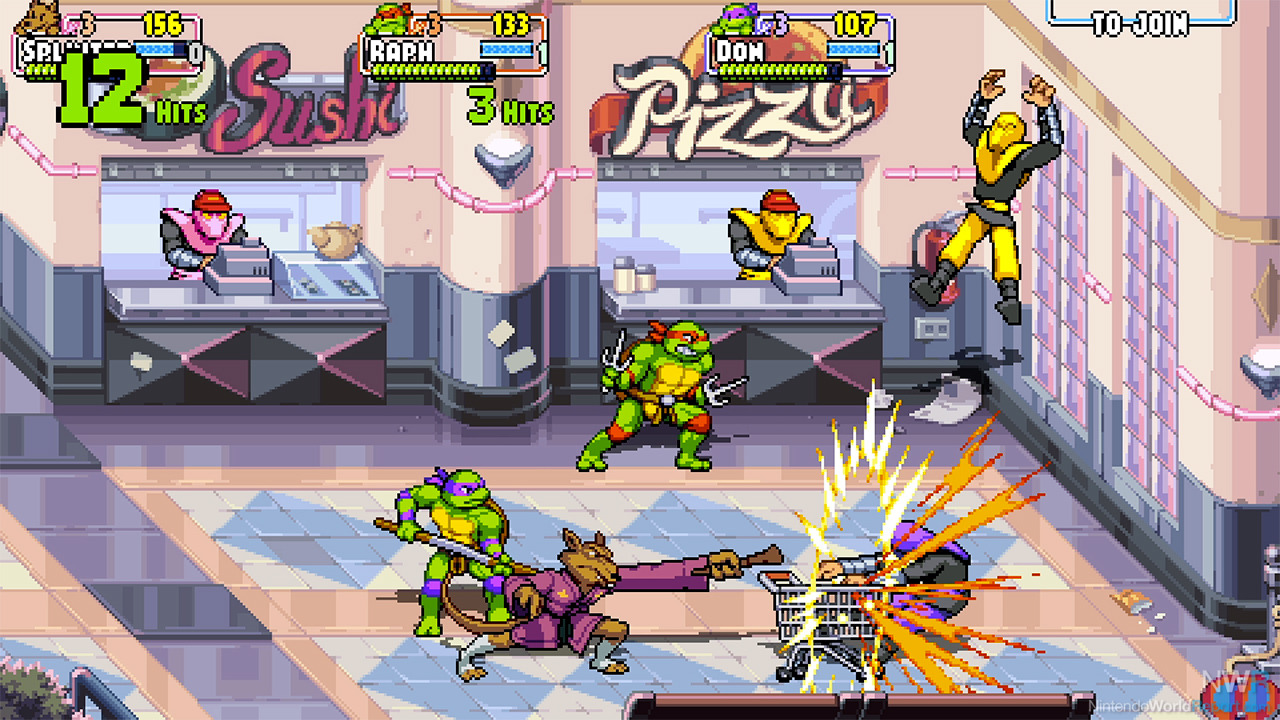 Each stage takes about 5-10 minutes to clear and culminates with a boss fight. On normal (Okay) difficulty, most of the bosses won’t make you sweat too much; it can be the lesser enemies and stage hazards that end up presenting more of a threat. Through a shopping mall and zoo, and across rooftops and Coney Island, there’s a ton of visual variety to each mission. While different colored Foot Clan make up a fair portion of the basic enemies you encounter, robotic Mousers, charging Rock Soldiers, gun-toting dinosaurs, and burrowing aliens are also thrown into the mix. Of course, you’ll eventually duke it out with classic villains like Metalhead, The Rat King, and Baxter Stockman, too.

Even if the game doesn’t seem to scale up in difficulty to match, playing co-op with up to six players is undoubtedly a blast. Dropping in and out is fairly effortless, and the frame rate largely holds up even during the most chaotic of battles. There’s nothing like getting six friends together in a room to Bebop and Rocksteady their way through what’s sure to become a classic brawler, but you can also team up via online co-op. Online play is seamless, and adding players or leaving a game basically happens without any disruption. However you get together, much like with an extra large pepperoni pizza, this game is meant to be enjoyed with others. 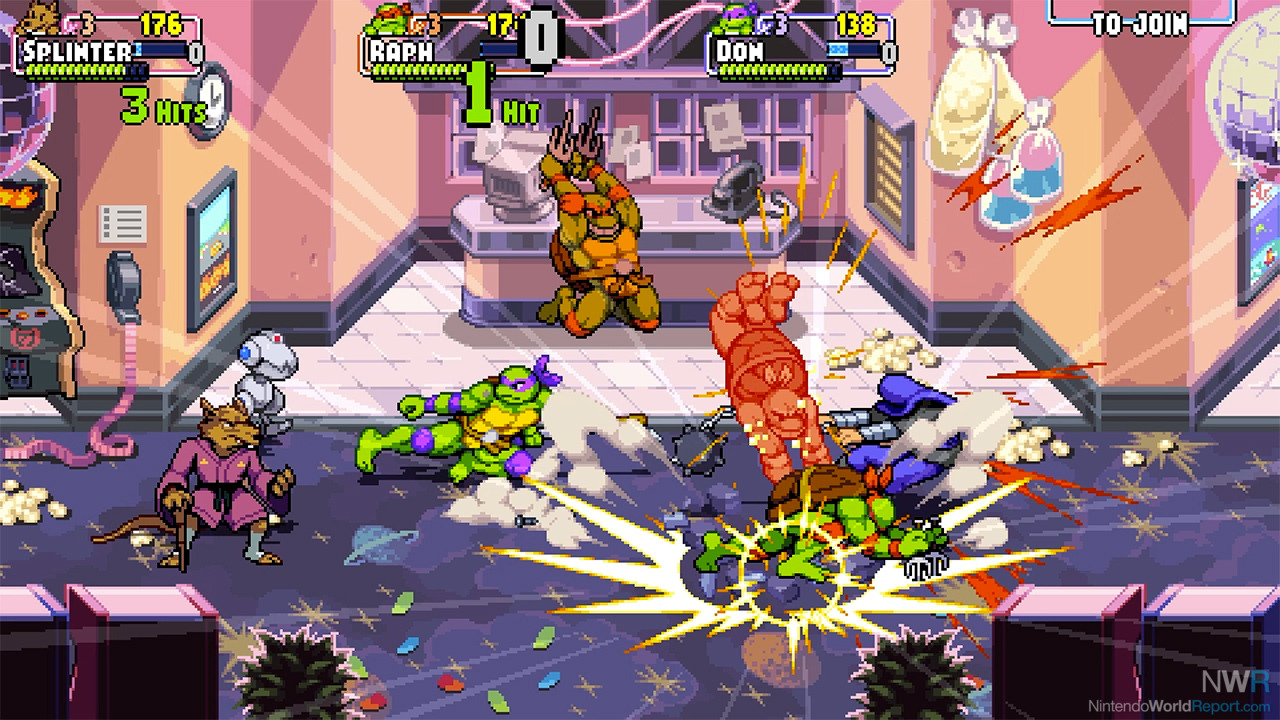 From an audio perspective, Shredder’s Revenge is on a whole other level. The voice actors from the original 1987 cartoon return to reprise their roles, which adds immensely to the charm and nostalgia. What’s even more impressive is the Tee Lopes composed soundtrack, featuring a song called "We Ain't Came To Lose," with hip-hop artists Raekwon and Ghostface Killah. I’m absolutely obsessed with the boss fight theme, personally. From top to bottom, the game’s music and sound effects push the action and really take center stage as you smash the Foot Clan and the rest of Shredder’s lackeys.

Teenage Mutant Ninja Turtles: Shredder's Revenge is so very far from being just a cheap nostalgia play; it’s a lovingly crafted, action-packed experience with fun and playful callbacks to classic Turtles games, a pantheon it will surely be joining. With three difficulty modes, 28 in-game achievements, and individual challenges for each stage, there’s no shortage of reasons to pick up a bo staff, hockey stick, or microphone and dive back in again and again. Only having a single save file for story mode is a bit of a drag, but the Arcade mode with online leaderboards offers another tantalizing avenue for further playtime. In short, if you’re a TMNT fan or love beat-’em-ups, you’ll surely dig the colorful and upbeat Shredder’s Revenge, especially if you can find a few other ninjas to kick back with.

Great review! I am so sold! The trailers sold me but now I'm super sold after reading this. I'm coming for you Rishman64, if that boss theme doesn't absolutely(as the kids would say) slap!

Great review! I am so sold! The trailers sold me but now I'm super sold after reading this. I'm coming for you Rishman64, if that boss theme doesn't absolutely(as the kids would say) slap!

If you ever played Turtles in Time, you're going to recall that boss theme pretty quick, and the one for Shredder's Revenge might be even better!