A shoot-'em-up sequel arrives 30 years after the original.

It's not always easy to identify a shoot-'em-up by its title, but seeing a number at the end might just be one of the telltale signs. Enter Andro Dunos II, the sequel to 1992 Neo Geo game Andro Dunos, which was published by SNK. Keeping our attention on the second game, it's a horizontal shooter that consists of seven stages and a few unlockable modes. What makes it stand out is the ability to swap between four distinct weapon types that can each be upgraded separately and have their own hyper shot ability that allows your ship to dole out massive damage for a few seconds. Is this another one for shmup fans to add to their collection?

From the main menu, you can choose to play through the standard arcade mode from stage 1 to 7 (with a few extras to unlock), opt for the stage select mode that lets you choose to start from any stage you've seen before, and fairly standard options and rankings tabs. The first few stages are space themed, but the rest take you underwater, to a golden city set against a star filled sky, and even within a massive battleship. The backgrounds are varied and the enemy types different enough from stage to stage to make them feel fresh. Every one ends with a fun boss fight, but generally the stages themselves pose much more of a threat than the foes awaiting you at the end of each one. 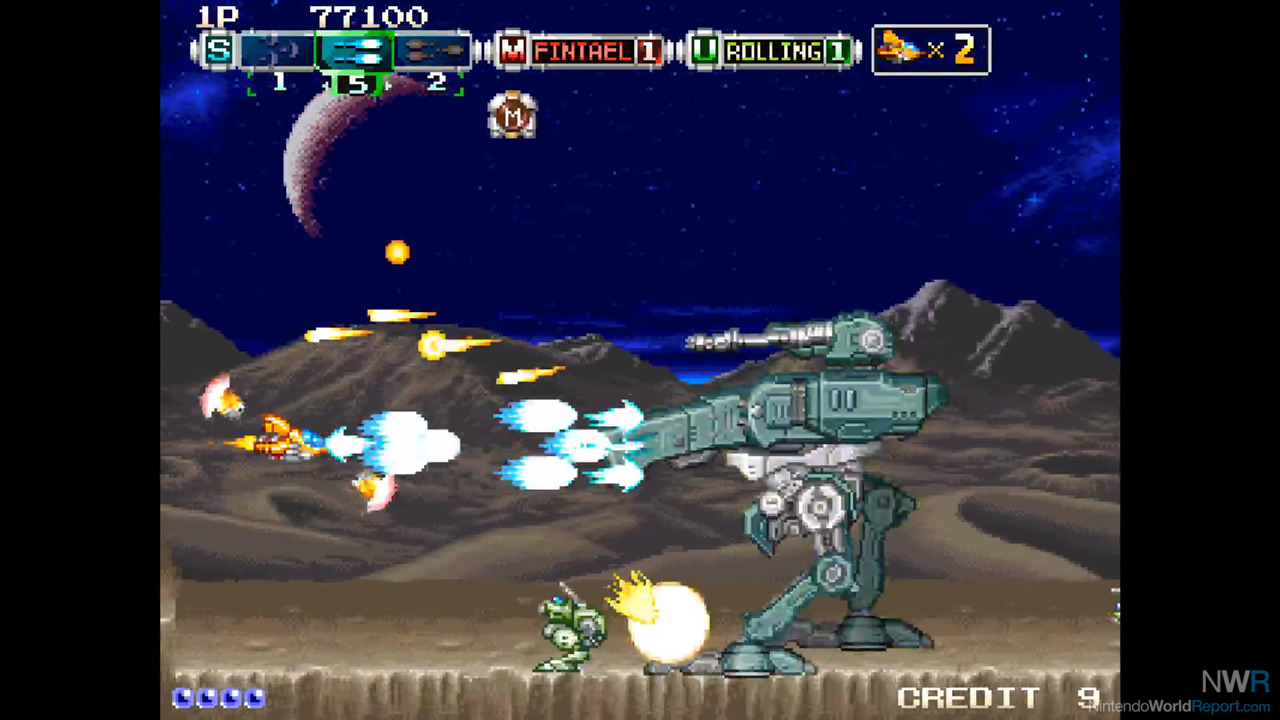 The stage select mode shows off the clean and nostalgic presentation of the game, and eventually displays all seven stages and three unlockables, including a boss rush. In terms of difficulty options, there are three to choose from, in addition to being able to adjust the number of credits (continues) up to a maximum of nine. Two face buttons control your basic and hyper shots, and then the L and R buttons allow you to cycle through your arsenal. One unfortunate aspect of Andro Dunos II is that the rankings are only local and not online, which always feels like an odd omission given that it's 2022 and that this seems a pretty niche title. One positive aspect of the stage select is that you can choose to play just one stage or start from any of them and play through the remaining ones from that point forward.

Getting back to the core gameplay, in destroying enemy ships you'll be able to acquire three types of power ups that add levels to your missiles, your floating shields, or whichever weapon you have equipped at the time. There are also blue orbs that drop and picking them up start a collection at the boom of the screen that’s tallied up between stages for bonus points and level up that let you empower one of the aforementioned attributes. On the regular difficulty, losing a ship also downgrades the power level of whatever weapon you were using at the time. Activating the hyper shot super charges your weapon, allowing it to destroy enemy projectiles and rain destruction upon the opposition, but during its cooldown period, the associated weapon reverts back to power level one, so it's worth switching to another one for a little while. 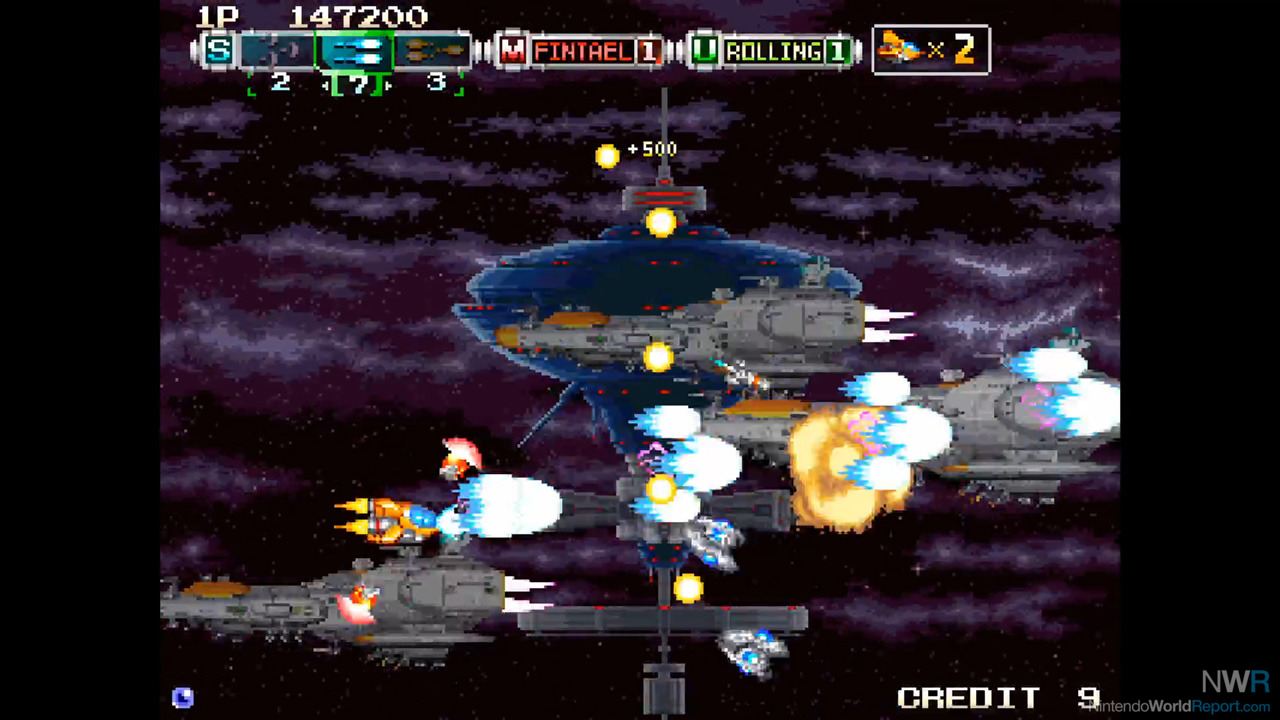 Rather than just scrolling from side to side, certain stages will see the screen move up and down and back and forth, and enemy ships and lasers can come from anywhere. At times, it can be hard to see what exactly killed you, especially after upgrading your own firepower to the point where it takes up more screen real estate. You really have to be on your toes at all times; it's not a bullet hell you're attempting to navigate, but a steady stream of ships, cannon, asteroids, and more that can seem unending.

While the presentation holds up on the visual side, the music isn't as catchy as you might expect from a shoot-'em-up. The soundtrack feels a bit more subdued rather than upbeat and fast-paced, which isn't quite my jam when it comes to this type of game, but I'm sure it will have an audience. If you're into the look of 16-bit and 32-bit horizontal shooters, you'll probably dig this one, too. 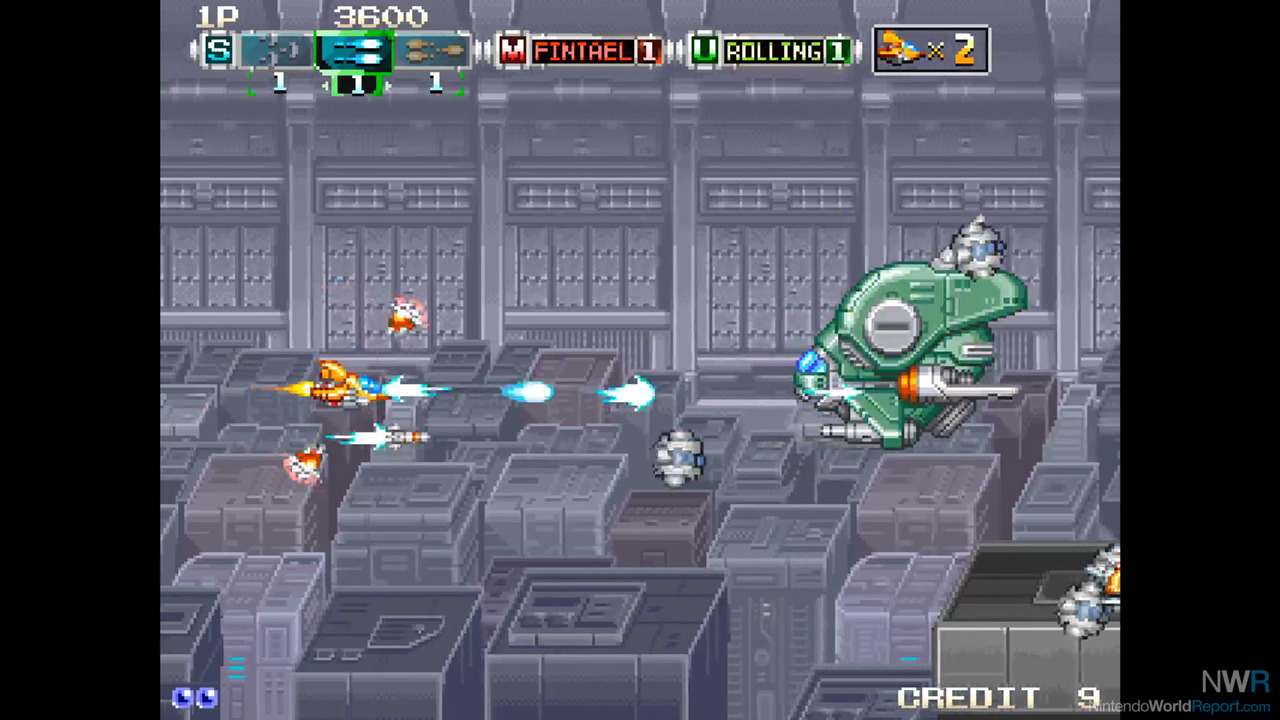 While I'm not intimately familiar with the first game, Andro Dunos II is an enjoyable shmup with a novel but intuitive weapon system. The lack of online leaderboards is unfortunate, but the core gameplay and the interesting ways in which the stages scroll and enemies weave in and out, often appearing in the background first as a warning, makes for a satisfying way to spend a few hours. With a tough boss rush, three difficulty options, and a couple other secrets to unlock, it's fairly easy to recommend this one to those who enjoy a good side-scrolling shooter, with yours truly sitting firmly in that camp. It may not be revolutionary, but Andro Dunos II plays well enough and seems a worthy successor to its original iteration.