This Space Port Is Astroneer-ly Perfect

Astroneer has been an under-the-radar sleeper hit since its release in 2019. It has a relaxed vibe of exploration that encourages experimentation with little to no punishment for zany adventures. System Era Softworks’ first foray into game development shows a high level of polish that has continued from its Early Access debut into the current Nintendo Switch release, with all content updates included. Astroneer provides a zen-like atmosphere that works surprisingly well docked or undocked, multiplayer or solo. In any form, it’s generally a positive, meditative experience. 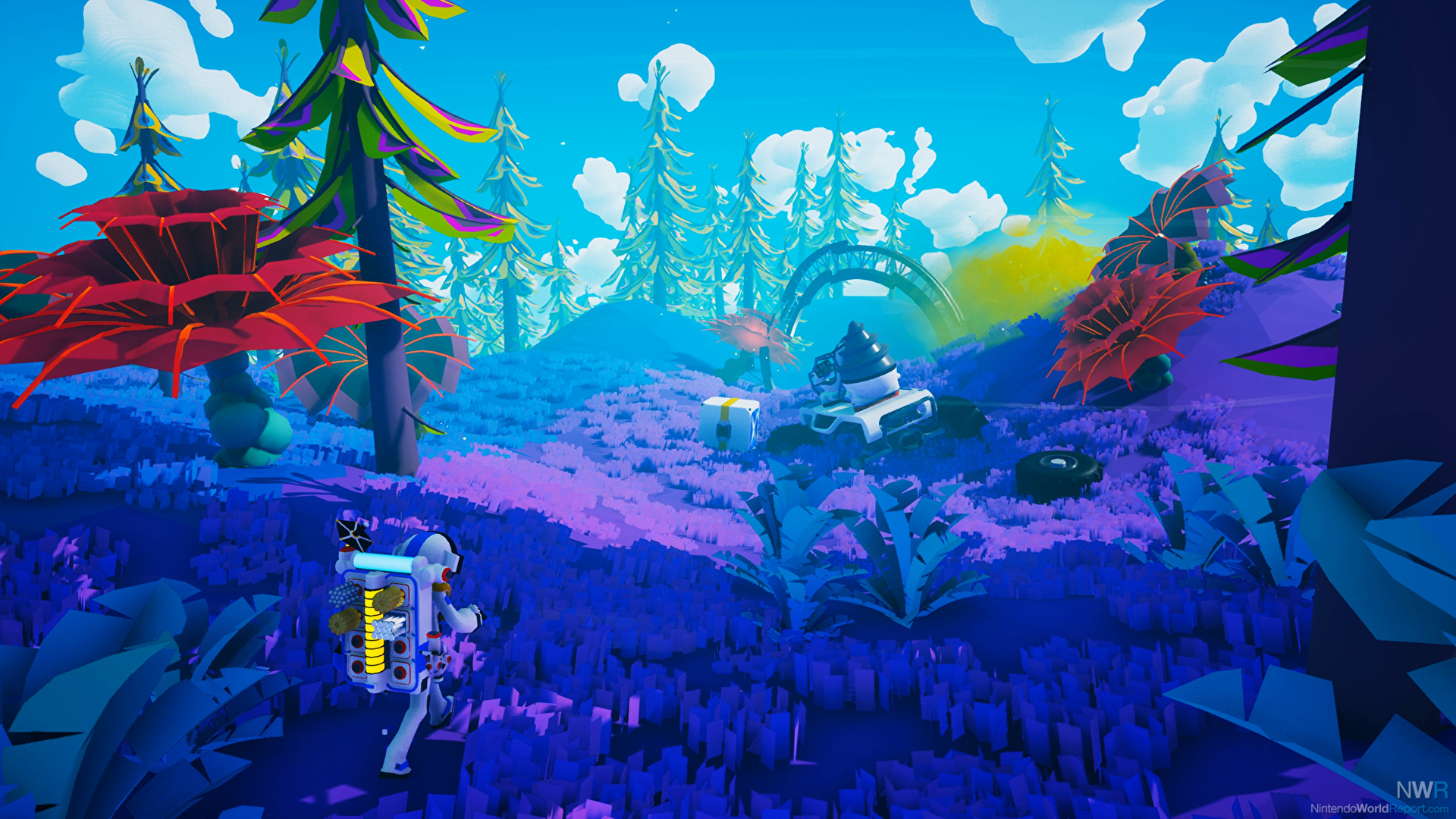 Astroneer sets you down on an alien planet with your shelter, 3D printer, and a terrain tool. The terrain tool is a giant vacuum used to suck up the environment—including the ground—and use the materials collected to craft more equipment. What stands out immediately is the sleek artstyle of the game. Everything is rendered in a sleek, low-poly approach. The environment is given a smooth geometric look with bright primary colors that matches the character and material design. These characteristics play well with the Switch’s capabilities and don’t lose anything when translated from PC.

One of the most clever points of Astroneer’s design is the technology. Everything from your backpack to your shelter is modular, with points to connect everything seamlessly. If you make an oxygen tank, it slots directly into your backpack, but also can slot into a storage spot of your terrain tool. Want to connect your 3D printer to your research table? It slots right in, and that way they can share the same power connection. It all snaps together satisfyingly like lego pieces. As you continue to research, find more materials, and upgrade, you will craft more technology to integrate together. 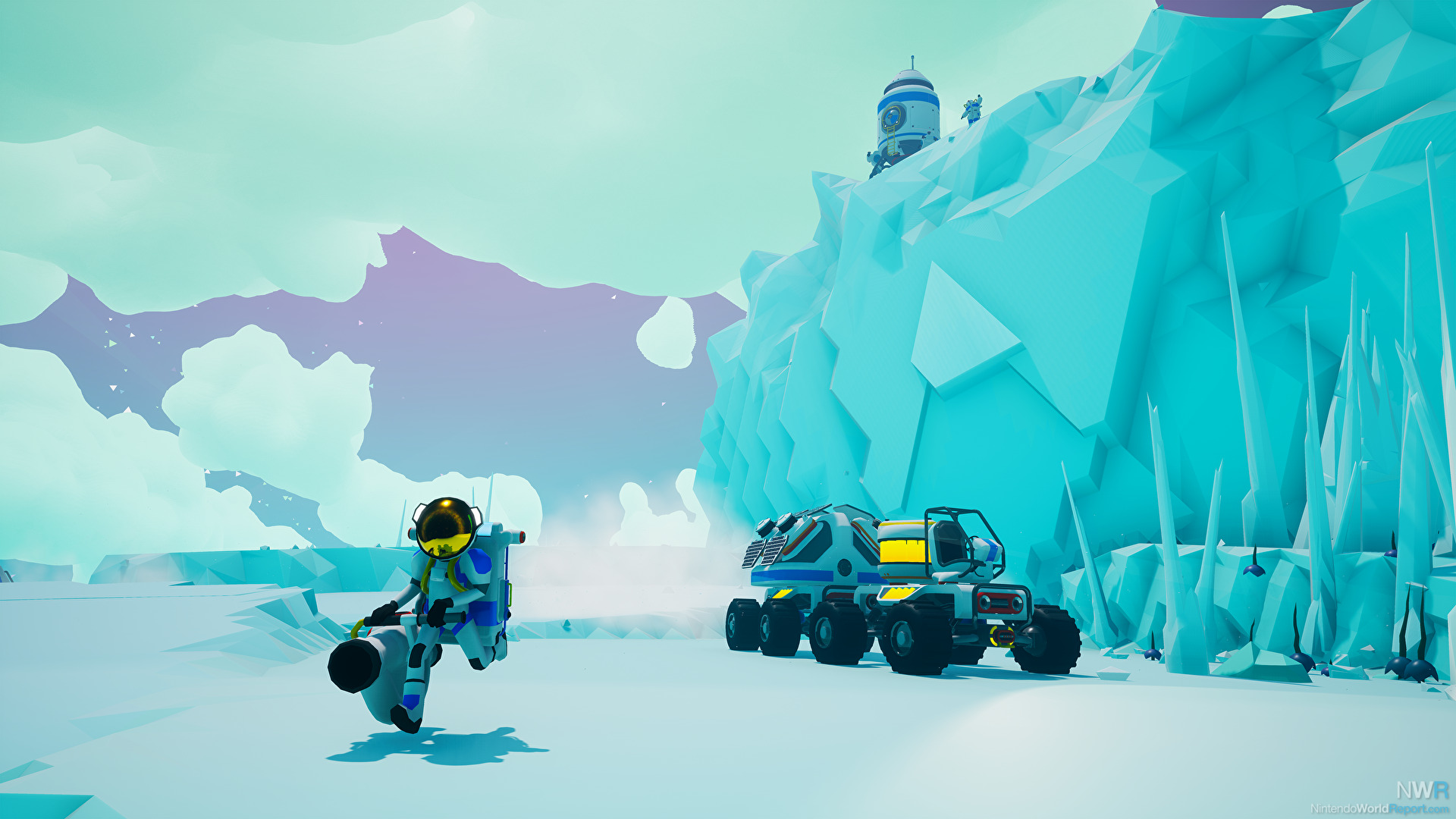 Using your trusty terrain tool to suck up the ground and create vast caverns or raise giant land masses is tons of fun. Watching the geometry warp and mutate to your will is hypnotic. On the opposite end, the ability to lift and move objects with a mouse-like cursor can feel clunky at times but is a limited pain point overall. Getting the hang of the researching, backpack management, and crafting has a bit of a steep learning curve but not an insurmountable one.

The technology is expansive and leads to creating a massive base that can be fully automated for resource gathering. It’s a rather deep system that includes factory style production systems and multiple vehicles for traversal—including interplanetary journeys. I found it easy to start a project, blink once and realize hours had flown by. Though I will say, the tutorial is less intuitive than one might want, and by less intuitive, I mean it’s the equivalent of reading a PDF. The game is great for spending hours digging deep into the systems but not without a wiki by your side to avoid getting frustrated at the aimlessness of the unknown. I won’t say the learning curve hindered my enjoyment, but the game does little to onboard you, so finding enjoyment is through self motivation. 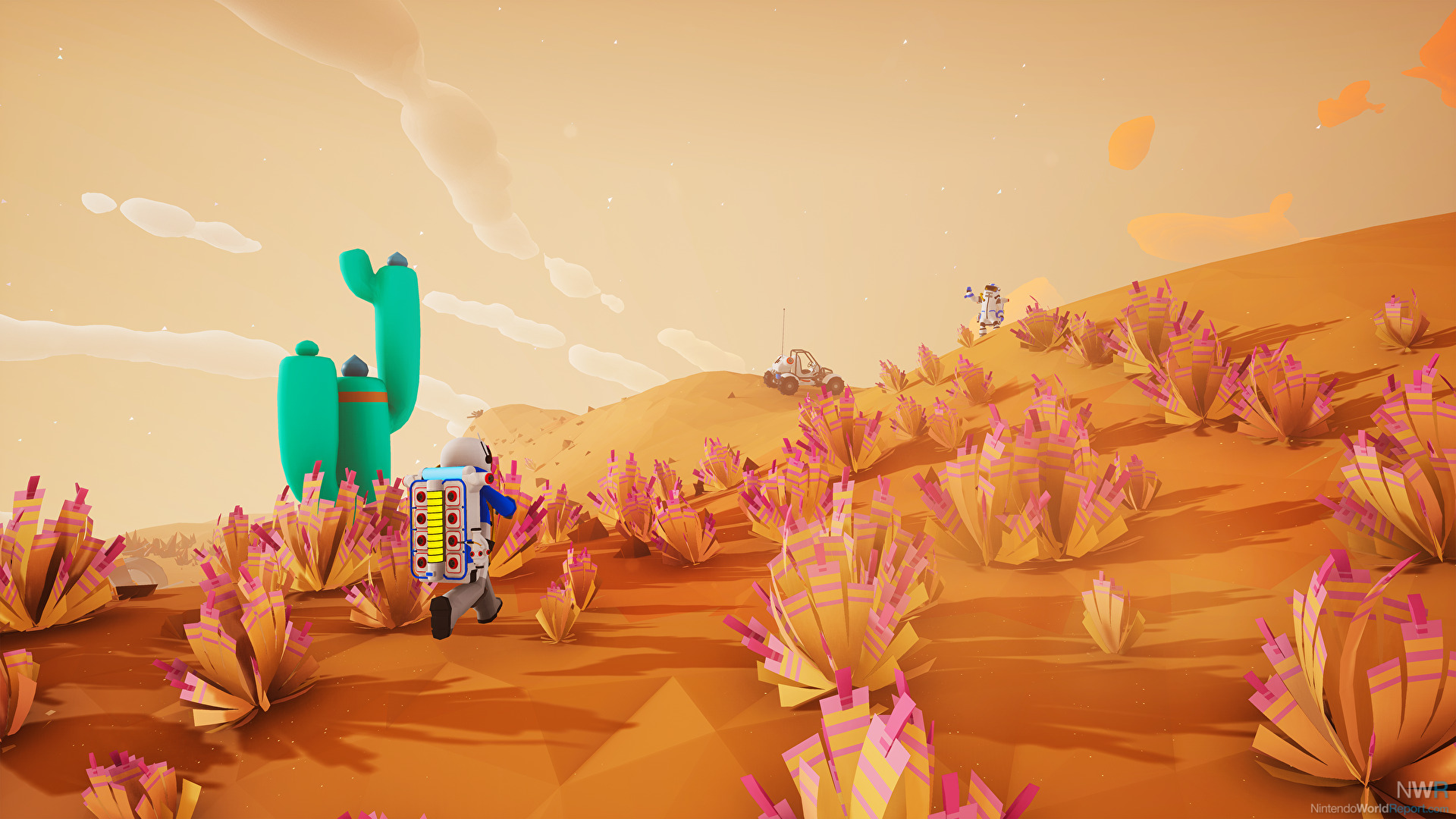 Once you’ve conjured up that motivation, though, Astroneer is a fantastic crafting game. Researching enough alien plant life to buy new recipes to mine new materials to build the recipes makes for a satisfying loop. I generally felt good upgrading my equipment step by step to let me go further into my exploration to get more materials. It might sound monotonous, but it works. This also is true in co-op mode (now for the first time with local co-op.) Working with a partner makes delegating tasks a lot easier and hanging with a friend while performing repetitive tasks is just a lot of fun. Also getting a dune buggy rover and performing wild jumps with a friend is as crazy as it sounds.

Even the soundtrack inspires a set of wonder and calm. The music is orchestral in nature but with a sci-fi lo-fi twinge to it. Out of this world synth sounds punctuate every track making this my go-to work soundtrack on my low key days when I want to relax and focus. As far as how Switch handles the game, it performs well in both handheld and docked mode, though some slow down during occasional hectic moments can occur. I see that as par for the course when the game lets you alter the environment entirely on a large scale. Other than that, this is a port worthy of what the hardware can accomplish.

Astroneer is a small package that packs a lot of punch. There’s so much to dig into and explore that it’s easy to lose hours upon hours without batting an eye. Despite the learning curve, I found myself putting on my headphones and zoning out to the sweet soundtrack and some mindless digging. I wish that the systems were explained a little bit better but some light reading and personal discovery help this underrated indie shine.