UNSIGHTED? Kind of ironic when this is a must see!

Around an hour into UNSIGHTED, I realized that I wasn’t playing just any indie title. I was genuinely surprised by the depth that this multi-genre game has. I say multi-genre for a reason. This exploration heavy, story-driven, highly replayable, top-down action-RPG adventure (gasp) is fantastic and will have you hooked after the opening level.

Developed by Studio Pixel Punk, who as evidenced by their social media platforms are very excited and proud of this release, UNSIGHTED really is a project to be proud of. You really can see the passion and attention to detail in every aspect of its narrative and gameplay. 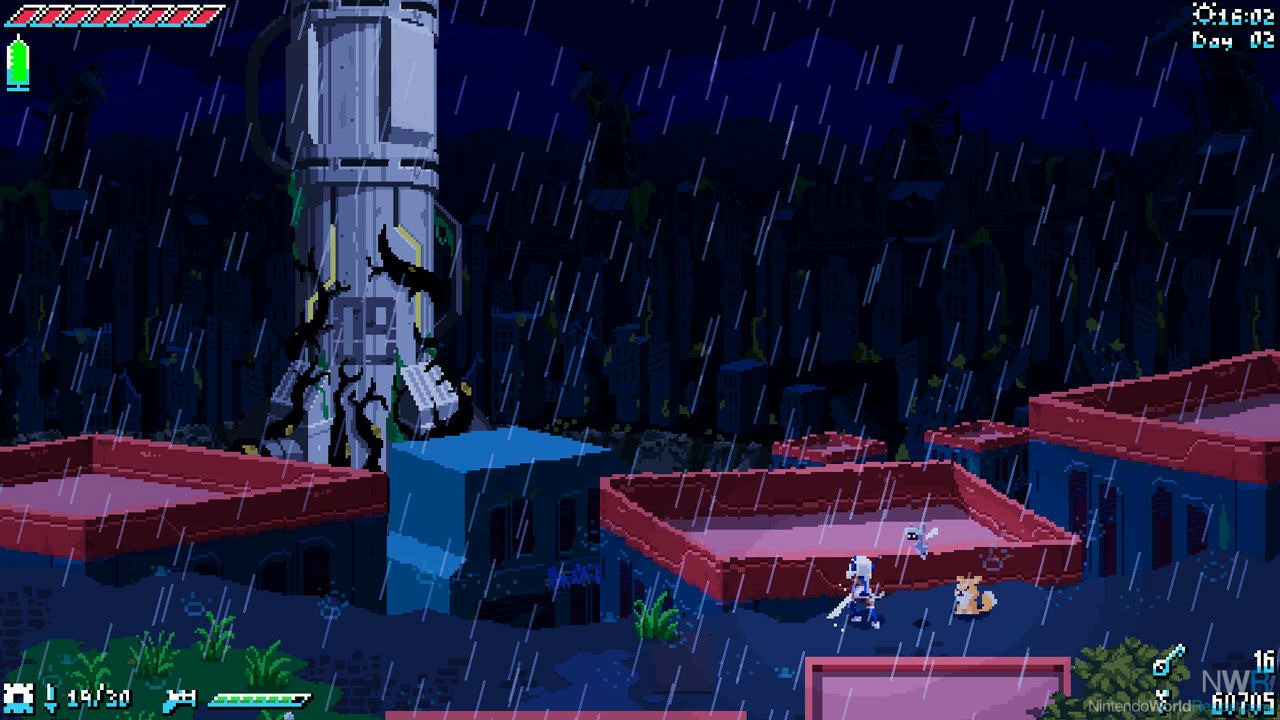 You play as Alma, who is an automaton (a robot that has become sentient due to “Anima”) that awakens in a lab to find that the world she just about remembers is now at war with humans. The Anima, which was once a rich resource for the automatons—and their life force—is now running out. Without it, Alma and her automaton friends are slowly becoming UNSIGHTED, which makes them non-sentient versions of themselves that essentially become killing machines. Every automaton has their own “time left,” which decreases in real time as you play, meaning that not only is your life at stake but almost everyone you care about, too. Alma takes on the task to locate five shards that harness the power to save all automatons from becoming UNSIGHTED. These shards are scattered across the world of Arcadia, each area they are located in very different from the last, and Alma must “collect” them. I use “collect” loosely because these are all protected by their own boss, each of which presents one heck of a challenge.

One aspect of the story that I would like to praise is that the bulk of the story and the characters are women (or at least female-looking automatons). The relationships, especially Alma and Roxanne's, is heavily hinted at being an LGBTQ+ one. Again, this is not told to us, but it’s how I saw it and I loved that. I wanted nothing more than to reunite Alma with Roxanne and save a huge number of other automatons that I had built a deep bond with as Alma. Having an LGBTQ+ narrative, as well as a mostly female cast is the kind of representation and diversity rarely seen in video games, but thankfully, it’s becoming more and more prevalent. 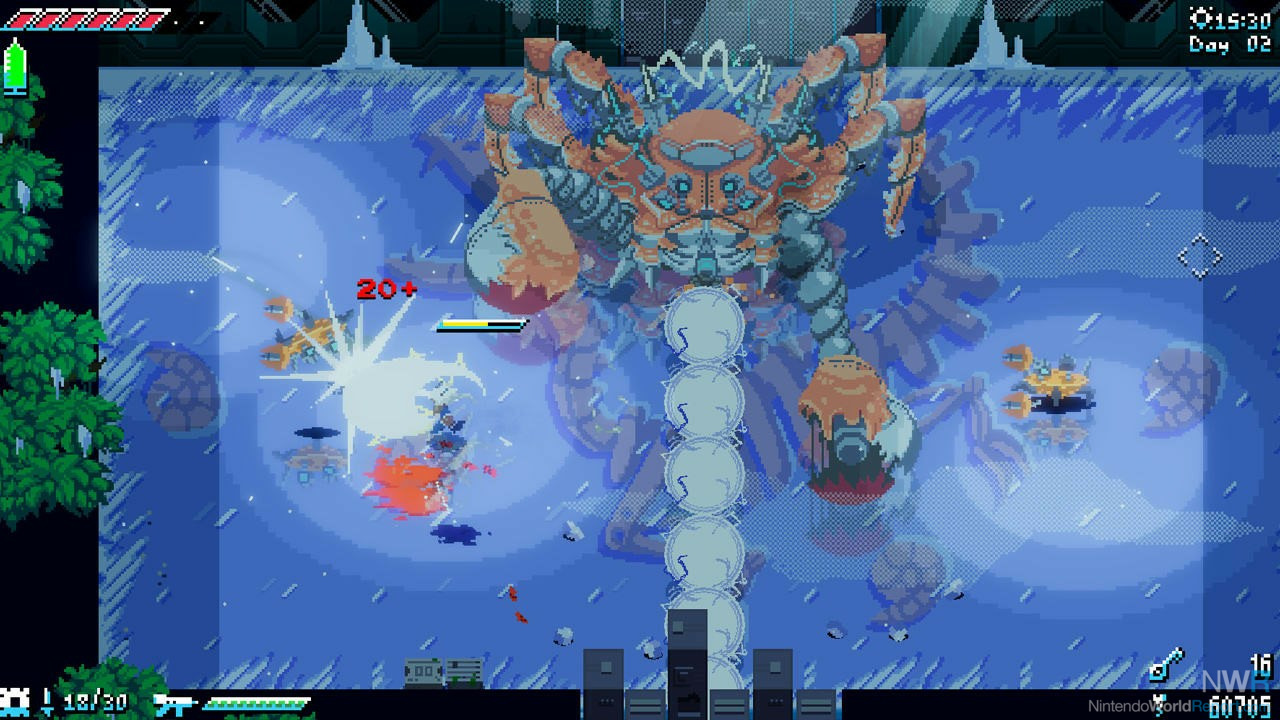 Knowing that your actions, decisions and basically any move you make can cost you and someone in this world to become UNSIGHTED is highly stressful. There are many moments as Alma, where you come across automatons mid-conversation or speaking to loved ones that have either become lost or are leaving to fight the humans. This adds a lot of depth to NPCs that you normally wouldn’t care too much about. At many points throughout the game, I was afraid to explore certain areas, instead of staying on task whilst playing, as one of the NPCs I recently encountered didn’t have long left and I wanted to save as many as I could. At the same time though, I was intrigued to see what happened if I did let them become UNSIGHTED and how this would impact the story — especially to important characters in the story, which is where the replayability would come in.

The gameplay is akin to Hyper Light Drifter and is much deeper than first anticipated. With UNSIGHTED, you have two weapon slots that can be changed at any time by pausing the game and switching them up in your main hub. These weapons vary from swords, guns, heavy axes, and more, with the ZR and ZL acting as the attack buttons during your campaign. These weapons can be gifted, found, and crafted (because of course there’s crafting). All weapons have different perks, speeds, and combos, so it’s fun to play around with different pairs to see what feels right or what is needed at a given moment. The combat seems simple enough but is difficult to truly master. Incorporating dashes and jumps and timing your actions to interrupt the enemies patterns is key to survival. There is a learning curve, especially when the controls could have been more polished. Movement feels fine, but when in combat, specifically when dealing with larger foes, the rigorous gameplay can feel stiff and stutter your movement at times. Although you also have a stamina gauge that depletes very quickly, you can alleviate this issue by adding a stamina chip to your unit. Chips are how you can upgrade and improve various stats—buffs such as more health, stronger attacks, and the oh-so-important stamina buffs can be added to Alma. Keep in mind, though, you only have a specific number of slots for the chips, so finding the right combination is key. You can increase your chip slots at Terminals, which is where you can also heal yourself and teleport to other locations you have previously explored. For a game in which you are against the clock of every automaton character’s lifespan, there is a lot to carefully plan, which makes for a highly stressful experience at times. 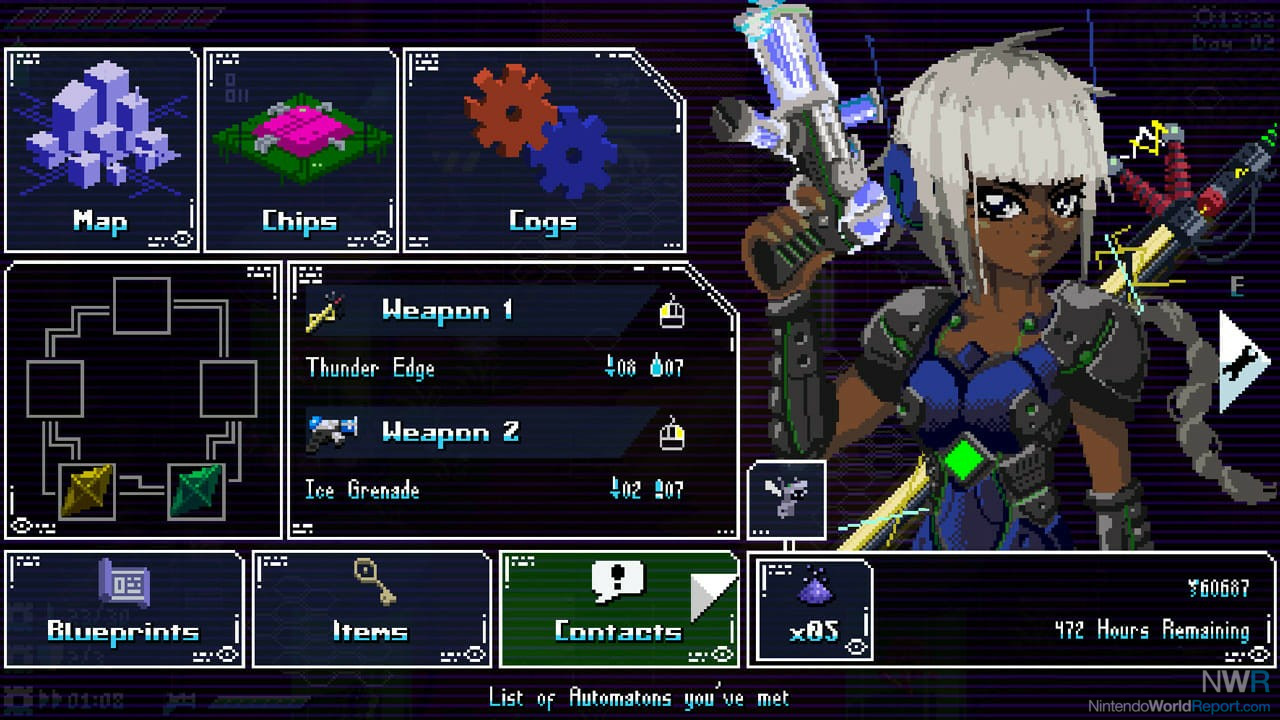 So far, I have only really scratched the surface on the customizability and things you can do alone when molding Alma into the best version you see fit. On top of the many weapon variations you can have, and the chip mechanic, you can also add cogs to Alma which are similar to chips but are temporary. An example of this could be using a cog that prevents stamina loss for a certain amount of time. You can also look over blueprints you have discovered for crafting and keep track of your inventory and key items. Another area that you can monitor at any time is your contacts. These contacts are the friends that you have made in the story. It will show your bond to that character through a number of hearts and also display their time left. This is a good way of also checking how long you have to save someone specific.

In the world of Arcadia, there is plenty to explore and find. The world can be viewed on a map at any time, which fills itself in as you enter new areas, Metroidvania style. When not in combat, there is always something or somewhere to explore, plenty of light puzzle elements, and often, more than one way to do things. For example, in the opening level, there are many ways to complete progress to the next area. You can collect the sword, locate the elevator code, and leave, or you can guess the elevator code and leave without the sword in which case you are gifted a different weapon later. Alternatively, after reading about the vents in a log that is left behind, you can seek out and then enter these vents to find unique items found nowhere else. This is only in the opening level before any story is presented to you or you even know the main character's name. With the world being so vast and me personally wanting to cover as much of it as possible, I felt at times I couldn’t do that due to the ticking clock of everyone’s life span. I found that I spent so long exploring the early game that a character mentioned to appear later in the game had already become UNSIGHTED by the time I got to them. I guess that’s where the replayability comes in. 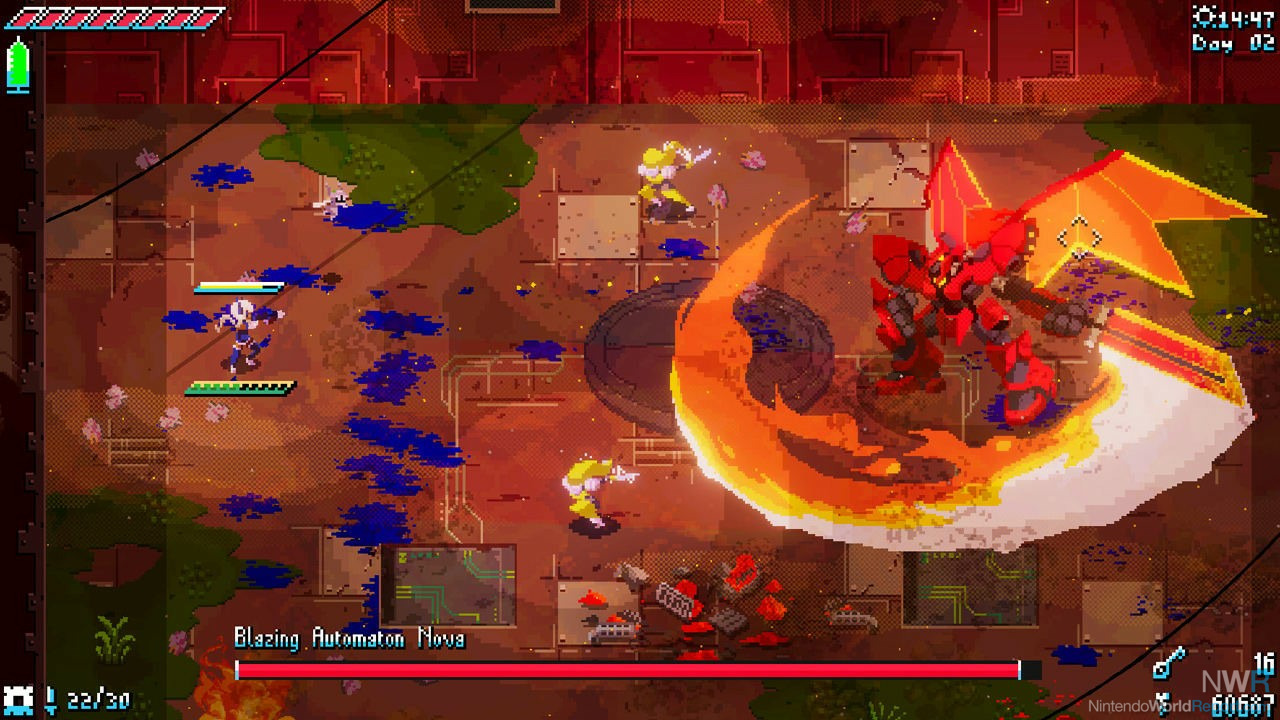 One living organism that has not threatened the lives of these automatons are dogs. An automaton by the name of Tobias has even opened a pet shop because of their love of these creatures. On your travels you can find stray dogs, rescue them, and send them to Tobias’ pet shop, and yes, you can pet every single one of them. A nice little addition, to distract you from the entire automaton race relying on you!

Aside from the main story, which you can play in co-op, you can also play two additional modes. These are Dungeon Raid and Boss Rush. Dungeon Raid is where you will traverse through procedurally generated dungeons to defeat enemies, collect loot, and try to survive as long as possible. I found this mode quite fun, and more of a drop in-drop out mode to practice combat without the stress of knowing my favorite automaton was out there slowly dying. Boss Rush is as you might expect: select a loadout of weapons and chips, and then see how many of the game's bosses you can defeat in a row. These are both nice extensions to the main campaign and although they don’t necessarily spoil the story at all, they do spoil who the bosses are and any weapons, chips and items you may not have discovered yet.

One of the biggest stand outs to UNSIGHTED is its visuals and sound. The pixel art, cyberpunk style is colorful and gorgeous. Even in murky dungeons the colors pop due to the constant aura of light that follows Alma around and highlights common enemies. The music is a piano heavy, melodic tone that I would happily listen to all day when reading books or just straight up vibing.

Overall, UNSIGHTED is a game that I hope doesn’t fall into the “hidden gem” category. For the simple reason that it is a gem that should not be hidden and needs to be in the line of sight (get it?) of as many gamers as possible. Despite the stress of the lifespan gimmick, this unique element is what will keep you on your toes and panicking, worrying but ultimately loving your time as Alma. The narrative is beautiful, and characters are all full of life and loveable, making for a gaming journey that you will genuinely care about.

That is some nice spritework.