From the outset it is hard to argue why Tetris Effect: Connected connected (no pun intended) with me so much. I can understand that for most people Tetris Effect in general is “just another Tetris game”. Tetris is now almost forty years old and I’d wager pretty much anyone looking at the review has played a game of Tetris in their life. Be it on the original Nintendo Game Boy or its many great iterations with the likes of Tetris DS and Tetris 99, just to name a few of the over 200+ ports that exist of this game. But that legacy not only carries weight, but also a sort of pressure. How can you T-spin Tetris in a new direction after so many variants and versions have come before. Resonair found a quite simple answer with the original Tetris Effect: emphasise the immersive and entrancing natures of the game with a vibrant, ever-changing visual style and music. Tetris Effect: Connected has to compromise these visuals a little bit, but in the end feels like the best way to play Tetris on your Nintendo Switch.

Tetris Effect: Connected is indeed Tetris. Big shock. You flip and rotate pieces consisting of blocks to form lines. Once a line is formed, it is removed from the board and the cycle continues. Points are kept and the game is over when your stack of blocks hits the top of the board. What makes Tetris Effect stand out however is its use of a magnificent soundtrack, sound-effects and visuals to create a truly immersive experience. This is best experienced in the main single player campaign called “Journey mode”. As you traverse through different soundscapes, landscapes, locations and abstract visuals you will find yourself getting sucked into stacking and twisting these blocks. Each time a block is rotated or placed, the soundtrack and sound effects are adapted into making your actions fit the beat of the song that is played. Once you’ve cleared enough lines, more visuals come on screen and the song advances. Needless to say that Resonair used their experience developing REZ: infinite and Lumines to create another fantastic soundtrack that almost feels as if you are composing it while playing. All this fits together like a glove and turns Journey mode into an almost meditative experience. 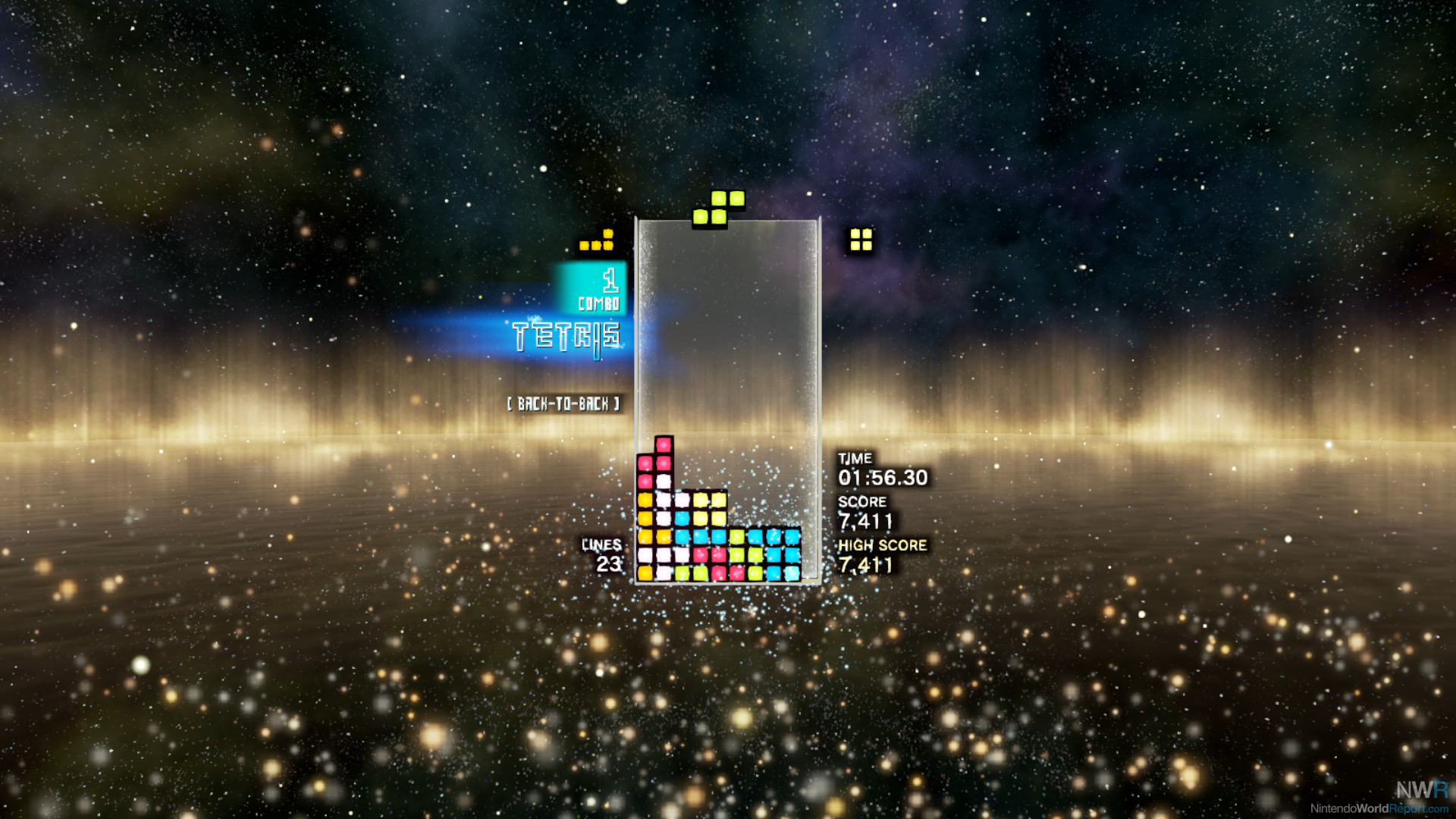 There’s an emotional core to making your way through all these levels and feeling the human connection behind it all. You are no longer just simply playing a game, but are feeling the ways in which art, music and culture have shaped the world. Using Tetris, a game almost everyone has played or recognizes, to connect you to other cultures with music and visuals feels almost ethereal at times. Yes, it all comes across as if I’ve taken some good LSD and started playing Tetris, but honestly Tetris Effect excels at making the experience of placing blocks give off a feeling of relief. It gets me into a very specific zone while playing and that makes it last for far longer than any other game of Tetris I’ve ever played before or since. 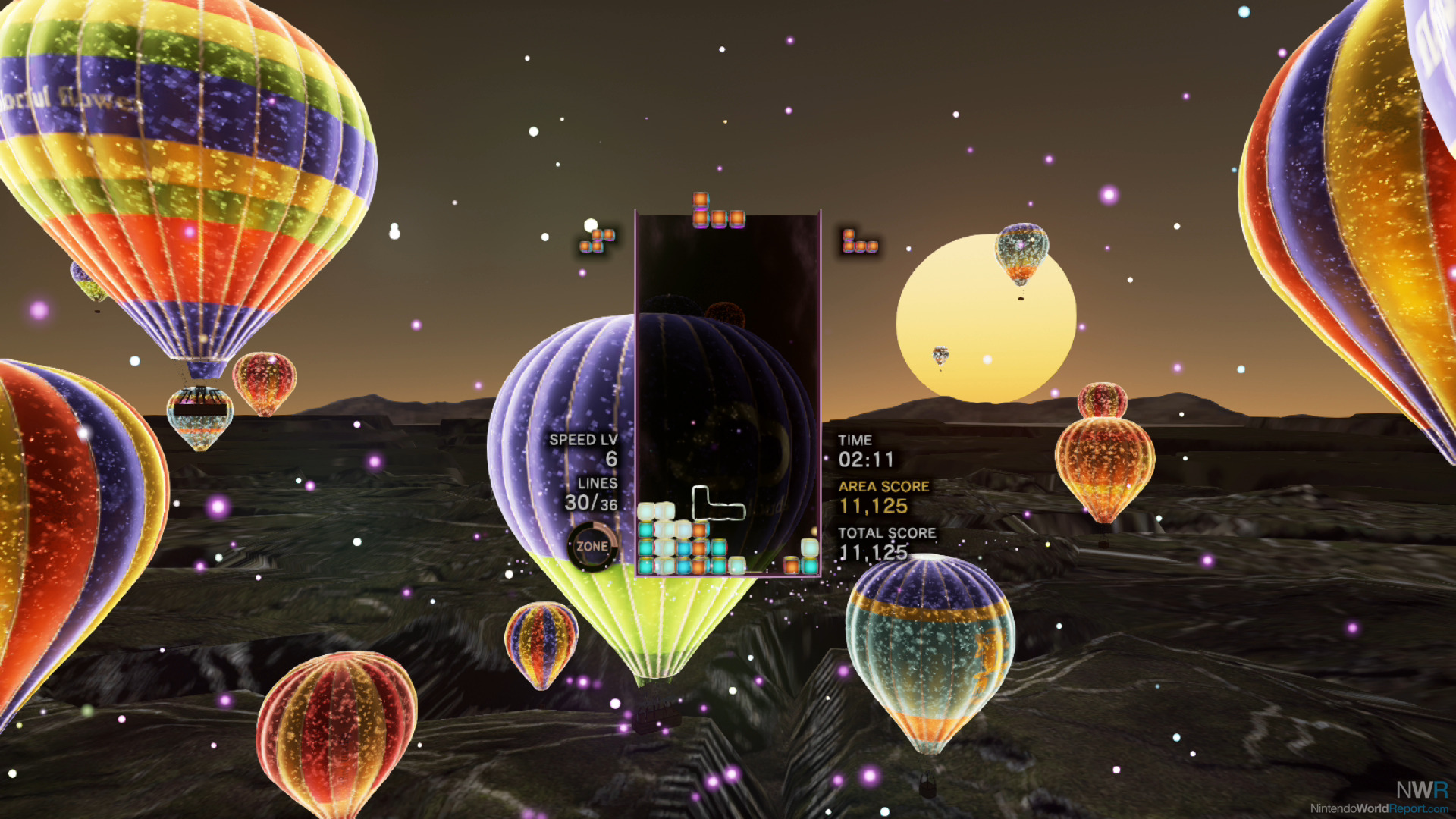 This is not to say that Tetris Effect: Connected has no gameplay tricks of its own. One of the key features is the Zone-mechanic. When you’ve filled up a meter you can perform this move to make time freeze. This allows you to clear up lines that are then removed from the bottom of the board. This gives you some great versatility when you are stuck in a bind and nearing the top of the playing field. I especially like the fact that you can actually create multiple Tetris-clears this way, allowing you to achieve an Octoris (8 lines), Dodecatris (12-15 lines), Perfectris (18-19), Impossibilitris (22 lines) and even higher scores. 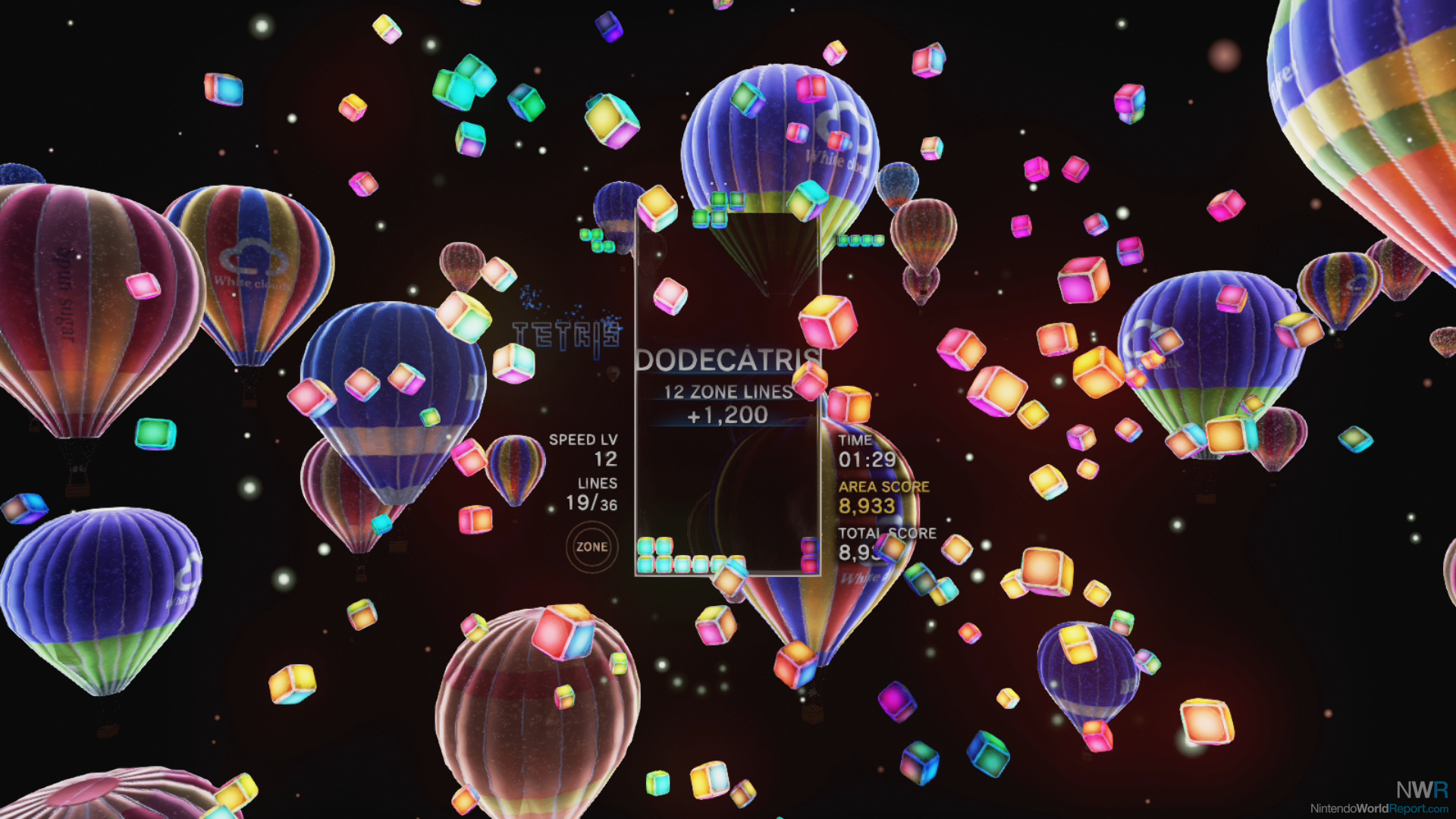 The Connected part in Tetris Effect: Connected comes from its multiplayer additions that have been added to other versions over time. These multiplayer modes worked great in my experience and bring some much needed variety to the game. Unlike Tetris 99, where competition is key, in Connected-mode, you play together with other players against a mysterious piece in the middle of a universe. You each have your own boards and try to rack up a score, while this piece throws obstacles and hindrances at you and the other players. Once you’ve filled up the zone-meter, you get connected with the other two players. This is where each individual board turns into a single combined board and players take turns in dropping blocks to remove lines. The more lines removed, the more damage is being done to the mysterious piece. Gameplay is super solid in this mode and I’ve found it a lot of fun because unlike other Tetris competitive modes, you actually feel as if you are working together. If there’s a game over, players can be revived to keep playing. The other multiplayer modes are a bit more classic. Such as a score attack and zone mode, which transfers all the lines cleared when using Zone to the other player as an obstacle. Resonair has also been keeping up with weekly events, allowing players to unlock special avatars to use in competitions and show off online. The game also fully supports crossplay with all other versions, so you can even play Connected together with friends on Xbox, PlayStation, Oculus and PC. 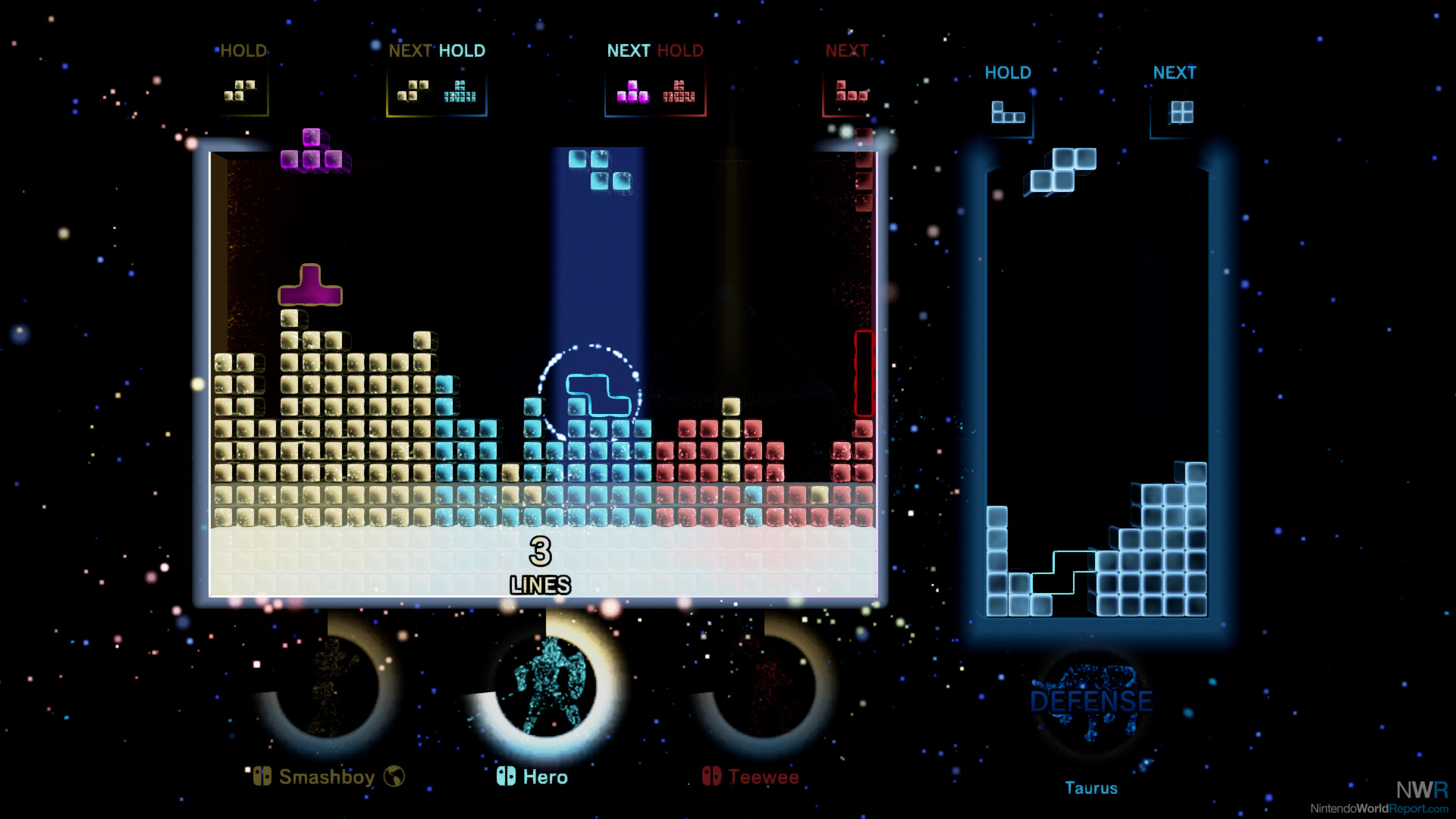 For a game launching alongside the Nintendo Switch OLED, Tetris Effect: Connected couldn't be a better choice to show off the new OLED screen on the system. The game looks jaw-dropping on this big screen and helps so much with the immersion. Both the colors pop vibrantly and make the game look much more alive during the levels in journey mode. It truly is the best showcase for what makes the OLED screen stand out from the other Nintendo Switch systems. Graphically the game has definitely needed some compromises to run as smoothly as it does on the Nintendo Switch. While I encountered no slowdown and had a stable 60FPS in both online and offline modes, the visuals definitely aren’t as crisp as they are on other versions. That honestly is a bit of a bummer, but for me personally having Tetris Effect: Connected on the go is an absolute win in my book. Yes, there’s no VR support and these visuals lose a few of their particle effects, but the music still rules and the gameplay is probably some of the best Tetris you can play on any system. This easily beats both Tetris 99 and Puyo Puyo Tetris for me as the best Tetris game on the Nintendo Switch and I can’t honestly give it more praise than that. 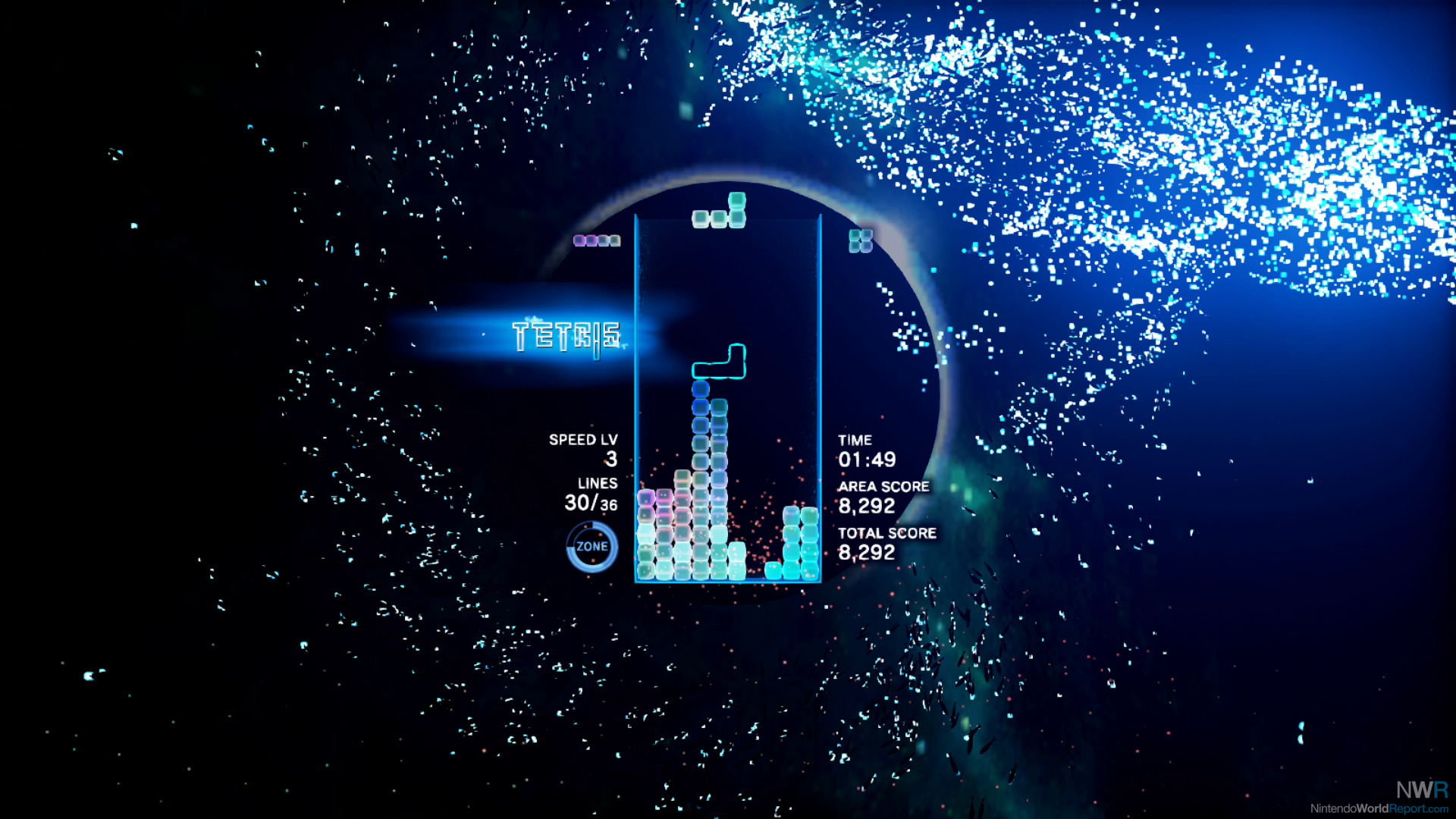 So yes, Tetris Effect: Connected is still Tetris at its core, but I believe it's so much more than that. It’s a bold visual statement. Its focus on culture and the ability for humans to bond over artificial things such as art, music, science and games shines throughout each of the levels in Journey mode. It elevates Tetris to a level beyond a mere puzzle game for on the train or as a piece of software that sold an old grey handheld system. It understands that Tetris is everywhere and that it is a part of culture. It understands that videogames are a part of our world and shared experiences and tries to communicate this through abstract worlds and ethereal music. While the gameplay of Tetris is still brilliant after all these years, Tetris Effect: Connected shows us how much video games have grown as an art form. From abstract blocks falling down a void on a Elektronika 60 computer to this all encompassing recognizable piece of art. I love Tetris Effect: Connected because it keeps reminding me why I love video games. There’s really nothing else quite like it. If you think this is just another game of Tetris, I urge you especially to give this game a try. Who knows? It may even change your life.