Motorbike racing for the detailed-oriented fan.

As an American petrolhead, I have a love of all things mechanica. However, motorbikes have been a bit of a blindspot for me. I certainly can appreciate the high-revving nature of small displacement engines running at full tilt. As far as video games go, Road Rash for Sega Genesis and its follow ups represent my favorite motorcycle based franchise, but regrettably I haven't played much else until I picked up RiMS Racing. RiMS Racing from Raceward Studio is more than just a motorcycle racer; it’s a sim that seriously sweats the small stuff but curiously leaves a few things amiss.

Much like other sim or sim-like racers (think Project Cars 1 and 2), this is a game where the producers really want you to experience the physics of motorbike racing. There is a brief tutorial that gets you acquainted with the controls, but it does not go far enough. While there are training sessions that can be unlocked as you progress through the game, I feel like they do not prepare new players for things like high-speed cornering or front versus rear braking. I found myself unable to corner at the same speed as the AI at its default difficulty level. Since this is a sim, there is a lot of physics involved, especially with how long it takes the rider to lean from one side of the bike to the other when shooting from corner to corner in quick succession, which can make or break your lap. The heft of the rider can be felt in the controls almost to the detriment of the player because of the game mechanics. 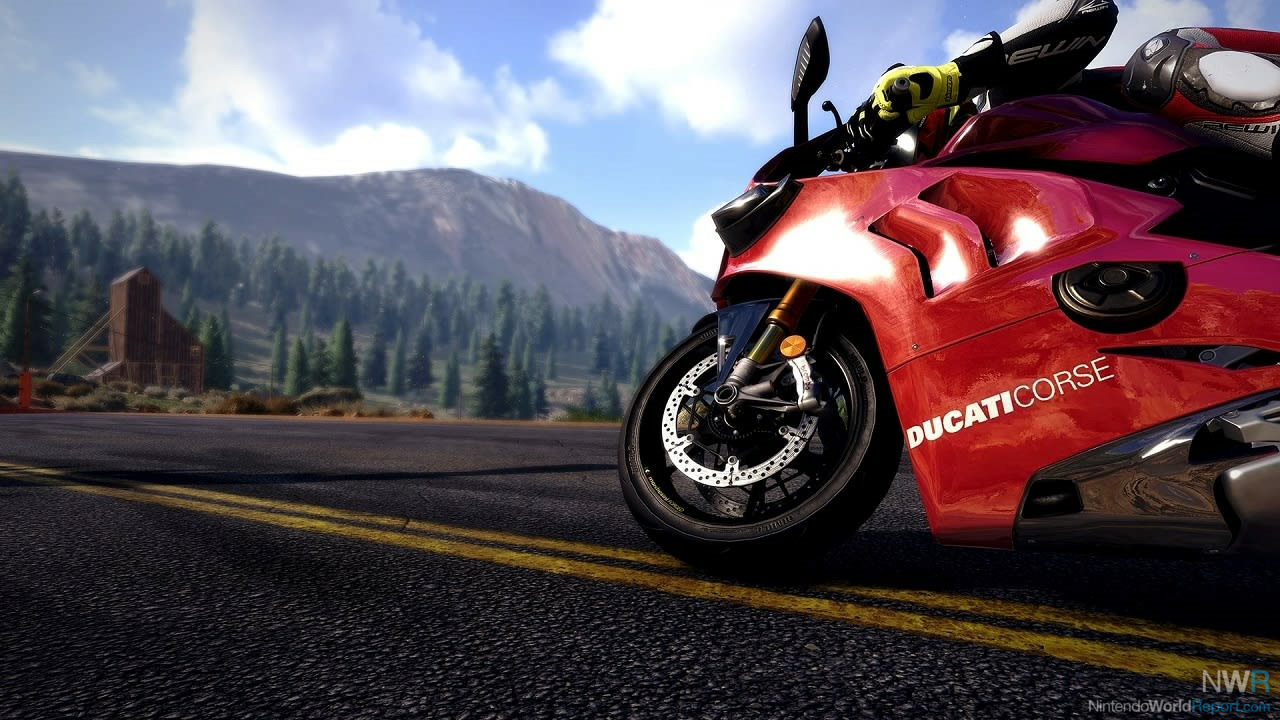 This sim competes directly with the likes of the Moto GP series in which you are given complete control over your bike setup, perhaps a little too much control. You can adjust some settings on the fly in the motorcycle status check window, but going through the menus while in a race can be infuriating. Before a race, it is certainly a great idea to choose a tire and suspension configuration that is optimized for the track you are on as well as the various weather conditions, but RiMS goes a little further. Starting with a list of manufacturers including Suzuki, Ducati, BMW, Honda, Yamaha, Kawasaki, Aprilla and Agusta MV, and one bike from each company on offer, the pool isn’t very large. However, the massive catalog of aftermarket parts dwarfs most car sim racers.

During a career run, you can use your money won from events to purchase and install these parts and I do mean, YOU install them. Once you have selected your part, brake pads for example, you are presented with a sort of quick time event where you must remove the caliper cover and unsecure and remove the old brake pad using controls as prompted. Then you must apply the new brake pad and then secure the caliper using the analog stick and bottom prompts as presented in the opposite order. For every new part you install, you must wrench it yourself and it is possible to replace nearly every part on the bike with almost (some parts are bike specific) any of the 500+ parts at your disposal when the old parts wear out. Some may enjoy this; others will find it unnecessarily tedious, especially when it comes to having to manage your inventory. 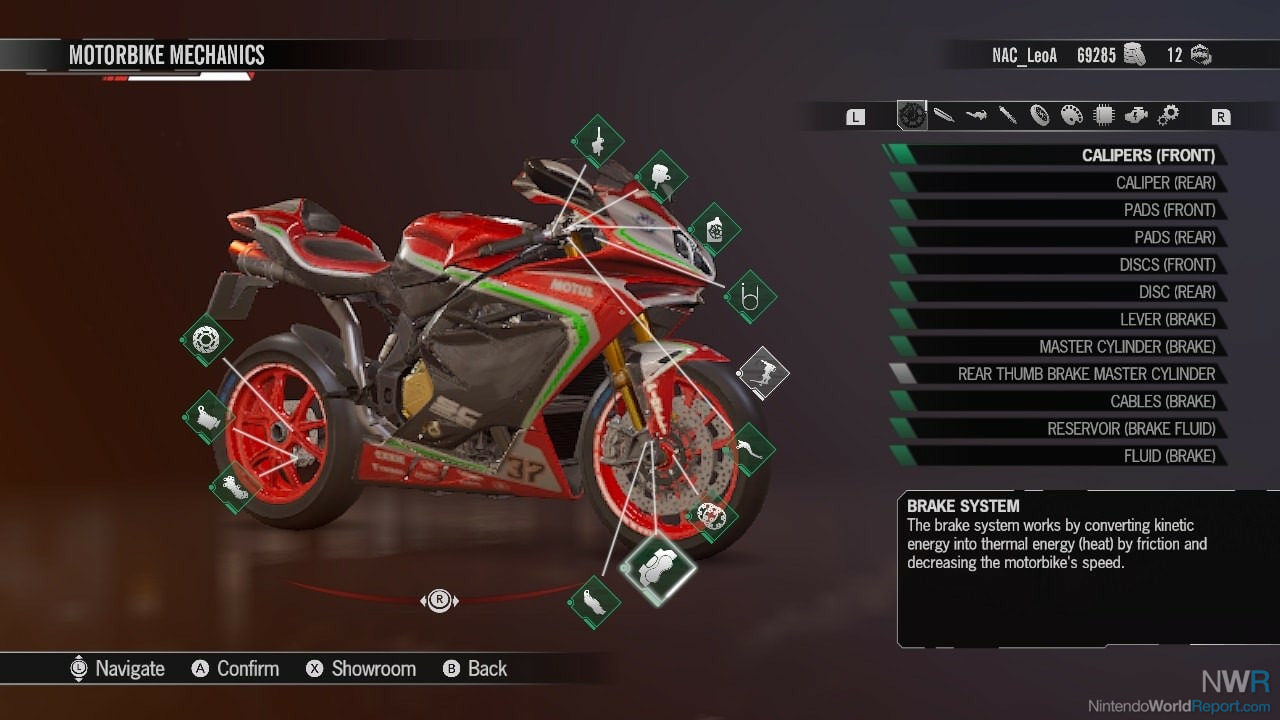 Once you have obsessed over your bike’s setup, it is time to put it out on the track, and here is where things begin to falter. In a race against nine other racers, the frame rate drops precipitously and all of the track detail becomes jagged and pixely. While other ports look pretty good, the Switch hardware underperforms and looks almost reminiscent of a PlayStation 2 title. The changeable perspective is nice to have and the first-person and helmet views are pretty good, but visibility of corners becomes a problem when trying to see the track from the first-person view. Also as mentioned before, when leaving the game in its default setup, things like cornering at any kind of speed are extremely difficult, while the CPU riders have no problem whatsoever carrying on at near full speed around the bends with their rider kneeling deep into the turn. Meanwhile, I understeer like a yacht into the wild green yonder, incurring a time penalty for my “shortcut.” Honestly, the game is better played at a lower difficulty with the physics toned down a bit. As well, there is the problem of the dumbed-down AI constantly knocking into you, which creates some hilarious far off shots of you flying off your bike in ragdoll fashion. The AI, when tinkered with, goes from ridiculously quick to slow and a bit idiotic.

The music itself keeps the game lively with exclusive EDM tracks from The Bloody Beatroots. The motorcycle engine sounds come off as genuine and realistic. Playing with headphones or on a TV with an excellent sound system is highly recommended to be able to fully enjoy the audio. When not in motion, the graphics themselves are fine. The up-close view of the bikes and upgradable mechanical parts are also well detailed. In addition, it’s worth noting that the 10 real world tracks from Silverstone to Nürburgring Grandprix are here in all of their simulated glory. Everything surrounding the actual racing itself is top notch; it's just the game’s performance on the Nintendo Switch that lets down the package. 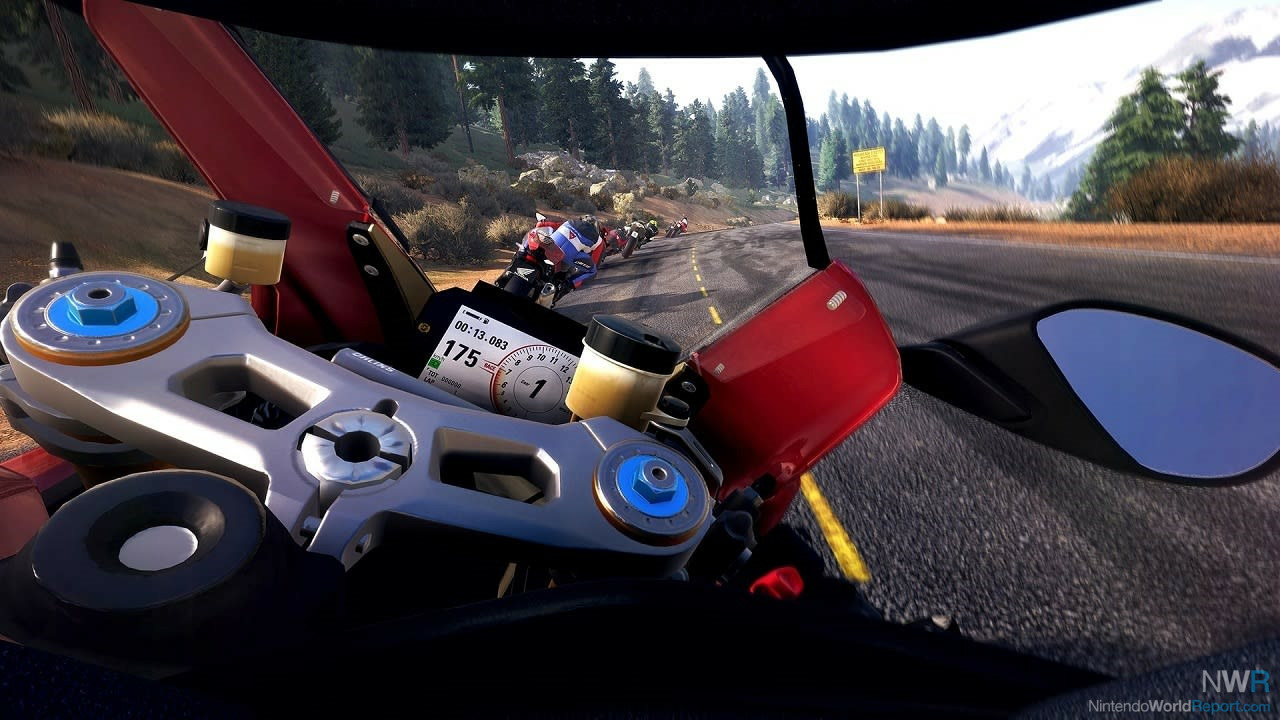 After following my own advice and turning the sim knob from 11 down to 5, RiMS Racing becomes an enjoyable simulation racer for those who really want to wrench their bikes down to the last detail. The parts catalog is incredible, and the immersion factor is interesting if you are the kind of person who enjoys doing the work at your own pit stops during a race. The graphical downgrade on the Switch casts a pale shadow on what is otherwise a solid yet difficult game with occasional obtuse vehicle handling. If you are a bike-racing enthusiast and don’t mind a challenge in its single race, career or online play modes, this game is for you. Casual bikers (myself included) need not apply.