Vincent, I’m going to need your badge and your gun.

Point-and-click adventures have always interested me, and of the small handful I have played, I’ve loved my time with them, especially those that have a deep story and characters you can grow to love. Warp Frontier is a self-proclaimed sci-fi cop drama, set in the distant future orbiting around Cetus, which is humanity’s new home outside of our current solar system. In this almost 8-hour game, you play as Vincent Cassini, a police captain who gets sucked into a conspiracy that plans to erase war crimes from history that have affected him and his loved ones. As Vincent, you are accompanied by MAC, your floating android sidekick, and you are tasked with solving puzzles, managing relationships, and ultimately stopping the aforementioned crimes from being erased forever.

War Frontier was created by independent Australian developers Brawsome, who specialise in “accessible non-action games” and point-and-click adventure games. This is their first game that will be on a home console as opposed to just PC/mobile. 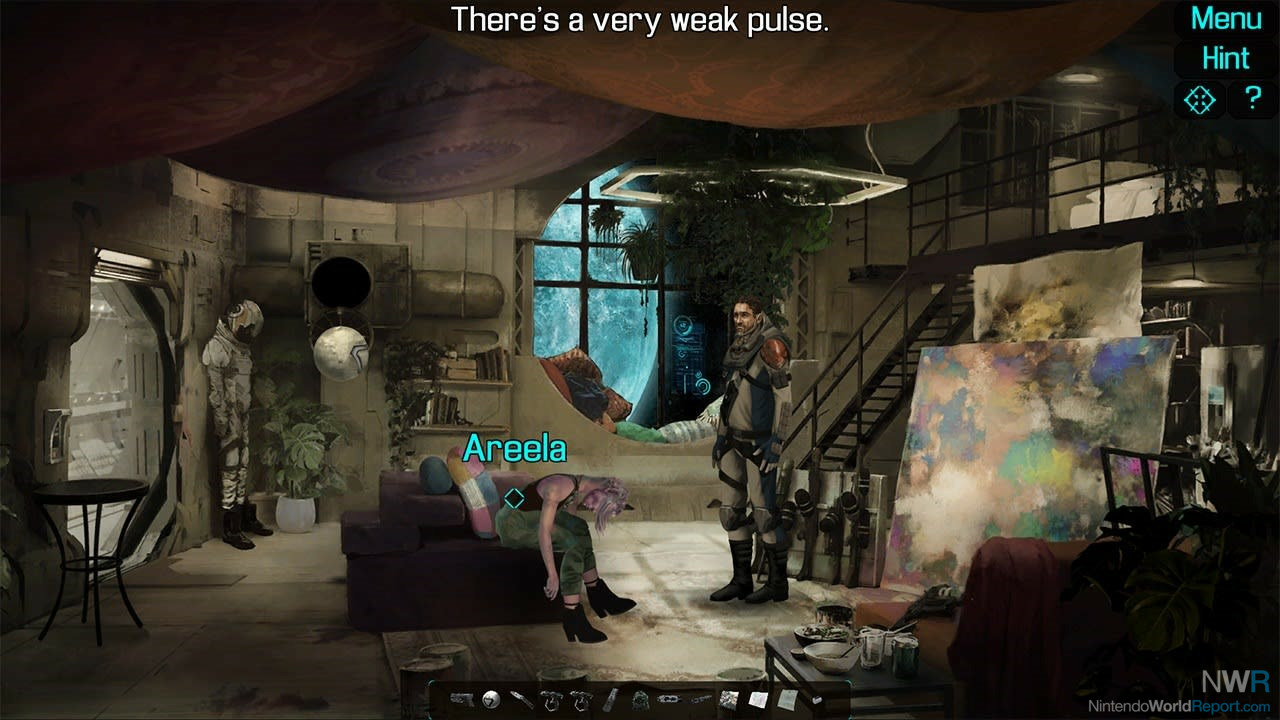 Gameplay-wise, Warp Frontier follows the same formula as all other point-and-click adventure genres. There are a few adjustments that this game has made to make certain aspects quicker or easier, though. Two noticeable features I liked were that instead of moving your cursor down to the dialogue options, you can simply use the D-Pad on your controller and select the direction indicated next to the option you’d want to pick. This is especially handy when you accidentally start a conversation you have either already had or you have already got the response needed; you can just hit the correct direction on the D-Pad to cut the chat short with an “Okay then” or something to a similar effect. Another helpful feature is that instead of manoeuvring all the way to the bottom of the screen to access Vincent’s inventory tray, to select an item to use you can simply press the L and R buttons to toggle through these to save time. Both features are especially handy as I found the cursor speed to be a little slow, and as there is no option in the settings to increase it, you are stuck with that set speed.

One option that is in the settings that I didn’t think I would find so enjoyable is the “Developer Commentary” section. By turning this on, you will have a set number of dialogue boxes appear in the corner of the screen, where Brawsome founder Andrew Goulding will begin to speak on the area of the game you are in. Here you can glean insight into what inspired that area of the game or his creative process at this time. After the main dialogue or action. had occurred in a scene, I would select these and have a little listen on how Warp Frontier was made. Unfortunately, that’s the extent of what I can praise the game for. 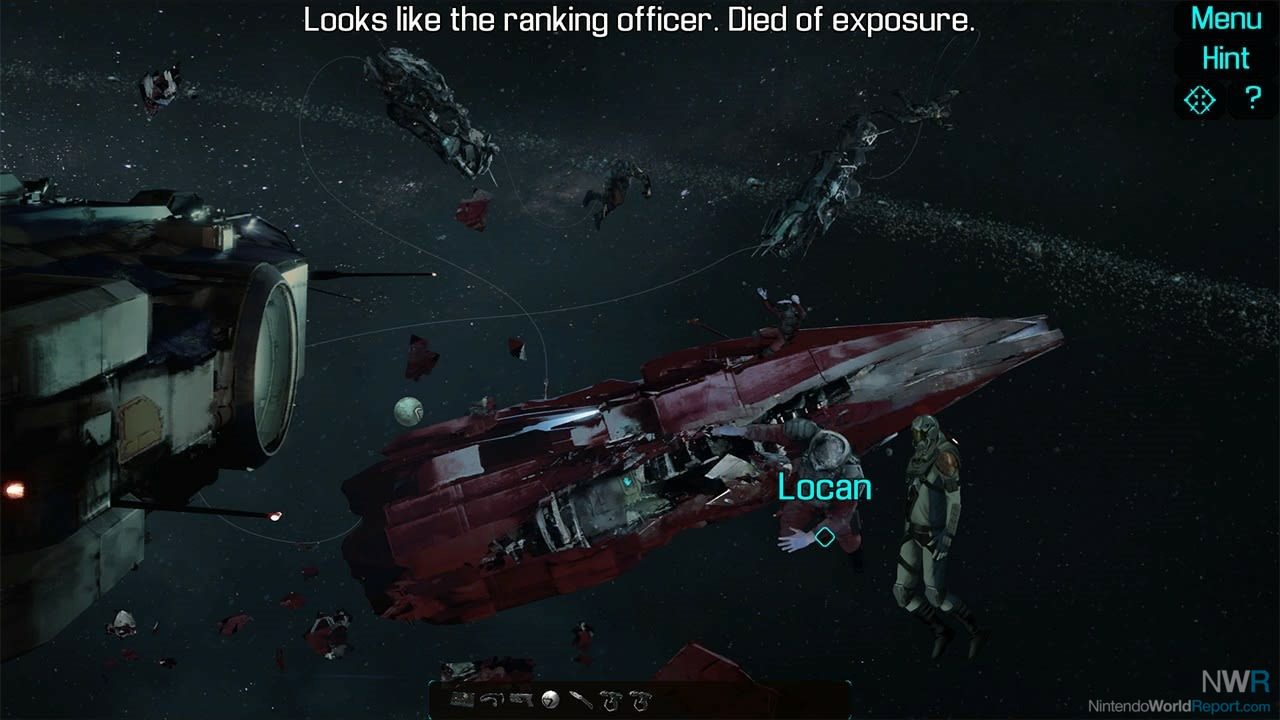 Whilst the gameplay itself is fine, with no real issues, the game itself is not. The story is interesting enough, but it is incredibly hard to become invested in the narrative or even care for Vincent due to Warp Frontier’s stop/start nature. And unfortunately, the stops are far too long. There are too many unnecessarily complicated or drawn-out puzzles preventing the continuation of the story, for example. Some of these feel impossible and were only solvable after randomly selecting items in my inventory or just through sheer luck, and by the time I had gotten past some, I had to re-remind myself what was even happening. You do have a hint box at your disposal, but I found this to be no help at all. Nine times out of ten it would just reiterate something you already knew with no “hint” as to where or how to do it, which is very frustrating as a player.

There are also a lot of interactable elements in some settings that you can’t actually do anything with. These elements can be distracting, and they elongate the time taken to complete puzzles given the chance that one of these non-interactable interactable elements could help or trigger something useful. As an example of this in the opening setting, there are at least 15 “points of interest” such as a pile of clothes in the corner, Vincent's bed, a cupboard, etc. and of all of these only around 3 do something more than offer just a single line saying what it is or what Vincent does with it. It is important to highlight, though, that all the dialogue is voice acted and done very well. 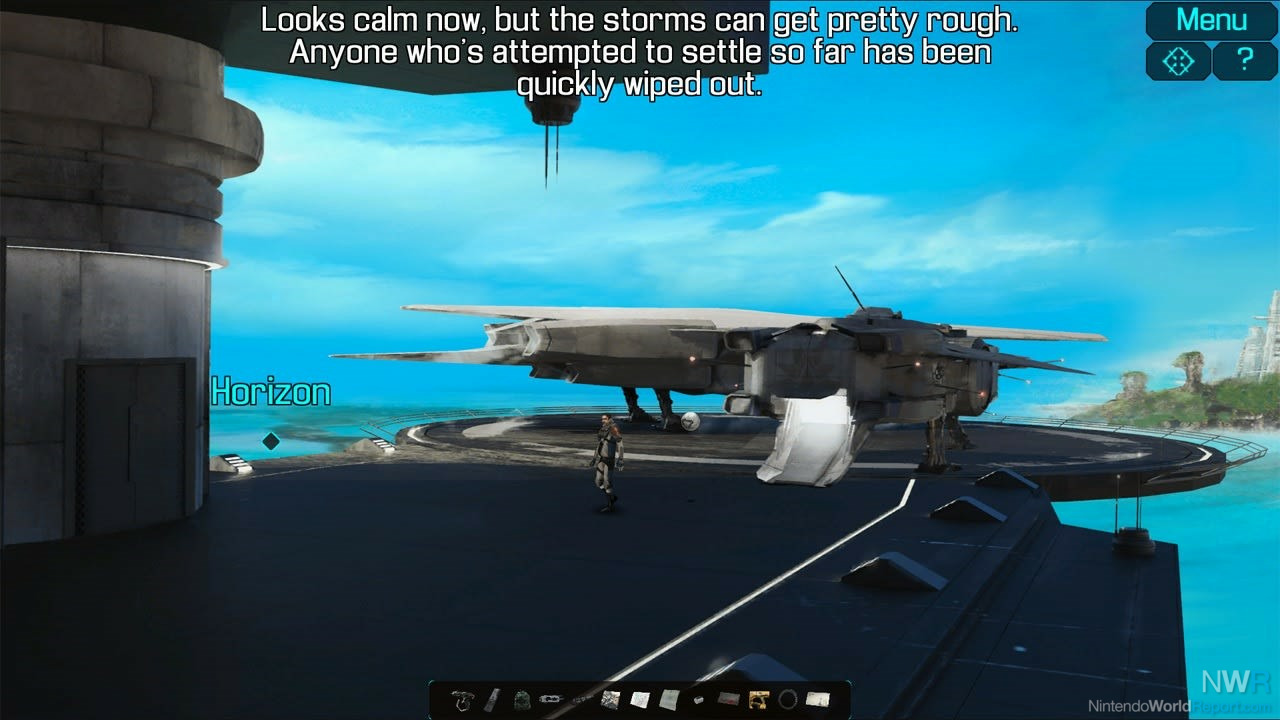 It’s worth quickly highlighting the art style used for the backgrounds and settings throughout the game. I found these to be very well designed and look great in high definition. The same cannot be said for the character models, though, which looked poor and moved even worse (just unbearably slow). Even though there is an option to speed up movements, this was inconsistent and further highlighted the below average design of these character models.

Although I can’t entirely fault the story in Warp Frontier or the voice acting performances, it was hard to engage in the narrative at all due to the frustrating puzzles and low-quality feel that the game presents. The almost randomness of solving puzzles to advance really did make for a negative experience overall that I can’t see many wanting to return to.