A treadmill into the void

On occasion, games just jump out to me simply based on their visual ambiguity. Some I may only wind up playing because the cover image looks striking. Alveole was one of these games. Nothing more on the eShop than a simple image of a white background with a man running on a treadmill. I was willing to take the plunge and gave it a spin. What I found was unfortunately not as exciting as I had expected, but its mysteries did provide me with some meditative peace of mind.

Alveole is cryptic in every sense of the word. Nothing is explained to the player about anything that is happening. You play as a human figure that runs around on a treadmill. Over time obstacles pop up along the treadmill and you can try and jump over these small hurdles. The game really leaves all interpretations and assumptions up to the player about the game. Is this person stuck in a time loop? Are you powering a large mechanism? Or is it all a representation of life itself? The game certainly won’t tell you and neither can I. 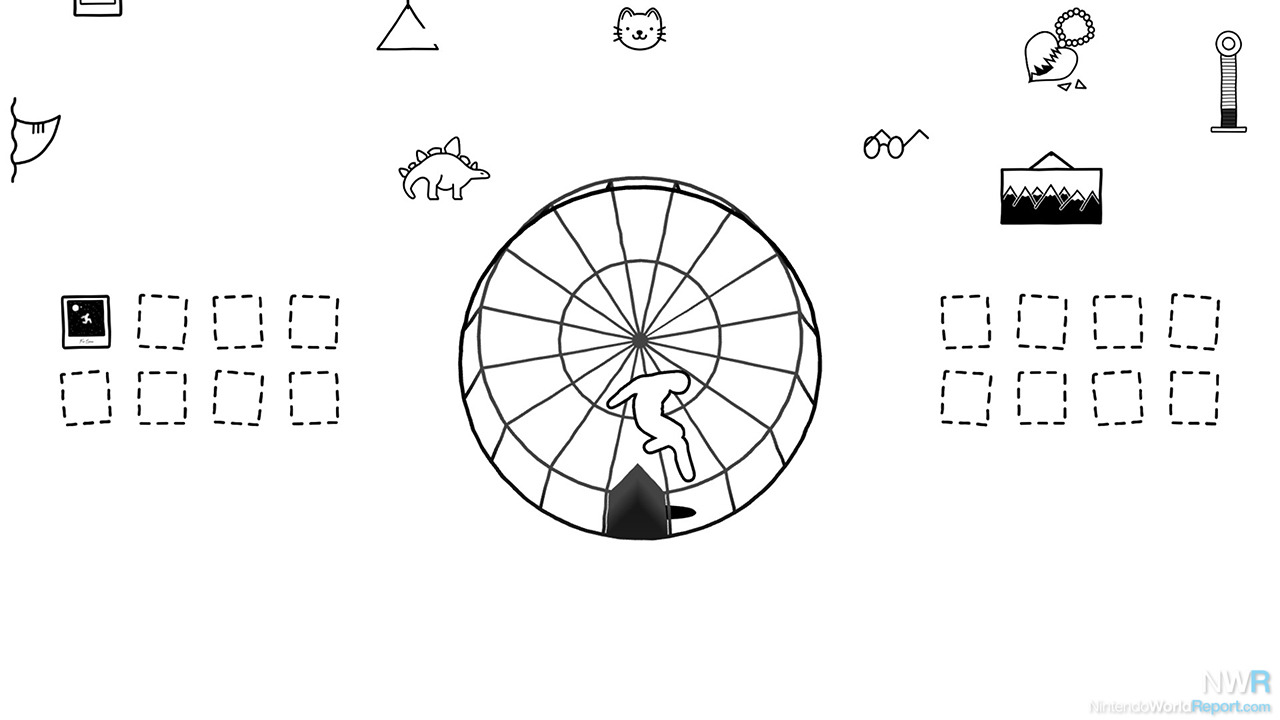 The only thing that’s clear is that during your time on the treadmill you will be receiving photographs for completing unspecified tasks. This could be simply holding down the jump button, restarting the game entirely or even just crashing into every hurdle on the wheel. There’s sixteen photos to collect in all and after collecting the last one you’ll be greeted with the final screen. The main drive behind the game is to discover what precise tasks you need to complete to obtain photos. There are no other actions other than jumping on the wheel, so I’d describe the game more as a puzzle title than anything else. Each goal is represented by its own icon that responds differently to how you perform on the wheel. Describing them in detail would give away a lot about the game and I feel that the joy of discovery is at the heart of this experience. That said, I have to admit that a lot of the time I was scratching my head trying to figure out what some of the hints meant. There frankly isn’t a lot of meat to the bones of Alveole that might truly keep you hooked. 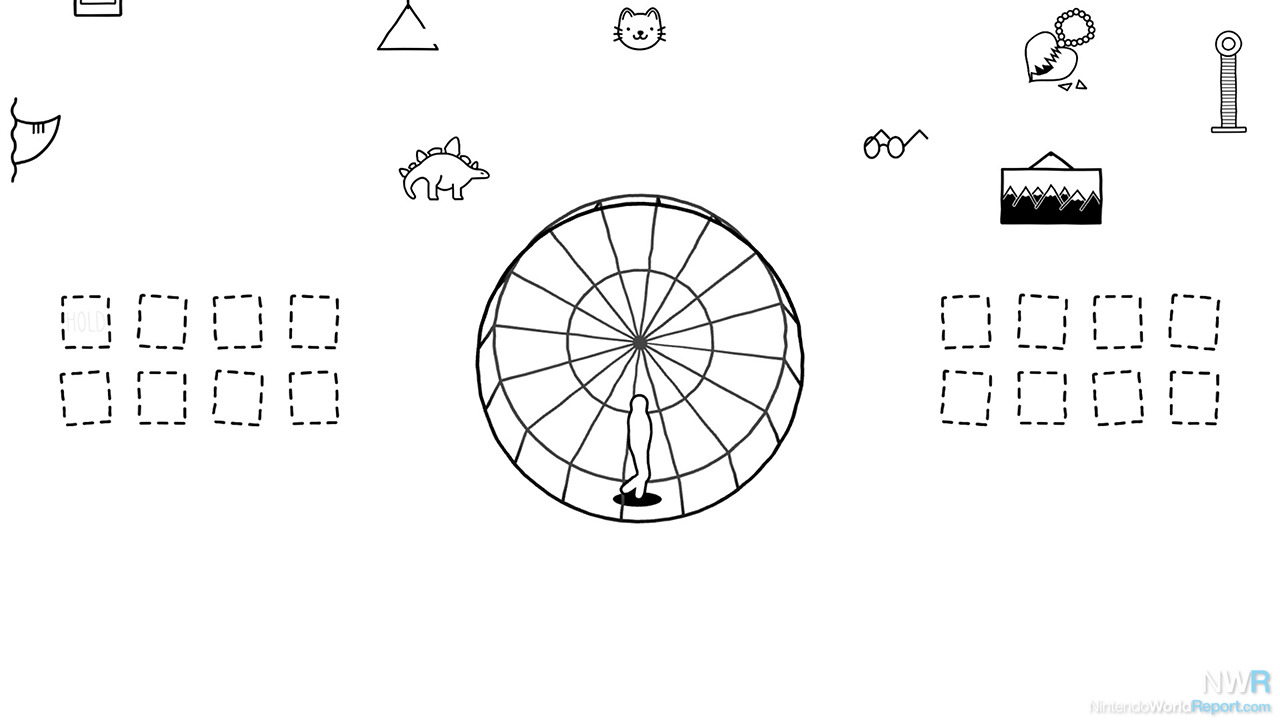 After looking at the game as a meditative experience, however, it turned into a whole different journey. The soundtrack is absolutely gorgeous, with a beautiful, long-lasting piano piece that always accompanies the serenity of watching the wheel spin around. It’s animation is perfectly smooth and almost entrancing in a way. It’s soothing to just watch the man run on the mill and listen to the tunes. It made me reflect on life itself, my purpose, and whatever else comes to mind in those last minutes before you drift off to sleep. Here, its simplistic presentation and the lack of information becomes the core of the experience. As a sort of combined optical illusion and strange fixture in time, I probably enjoyed Alveole a lot more for what it is not, than what it actually is. 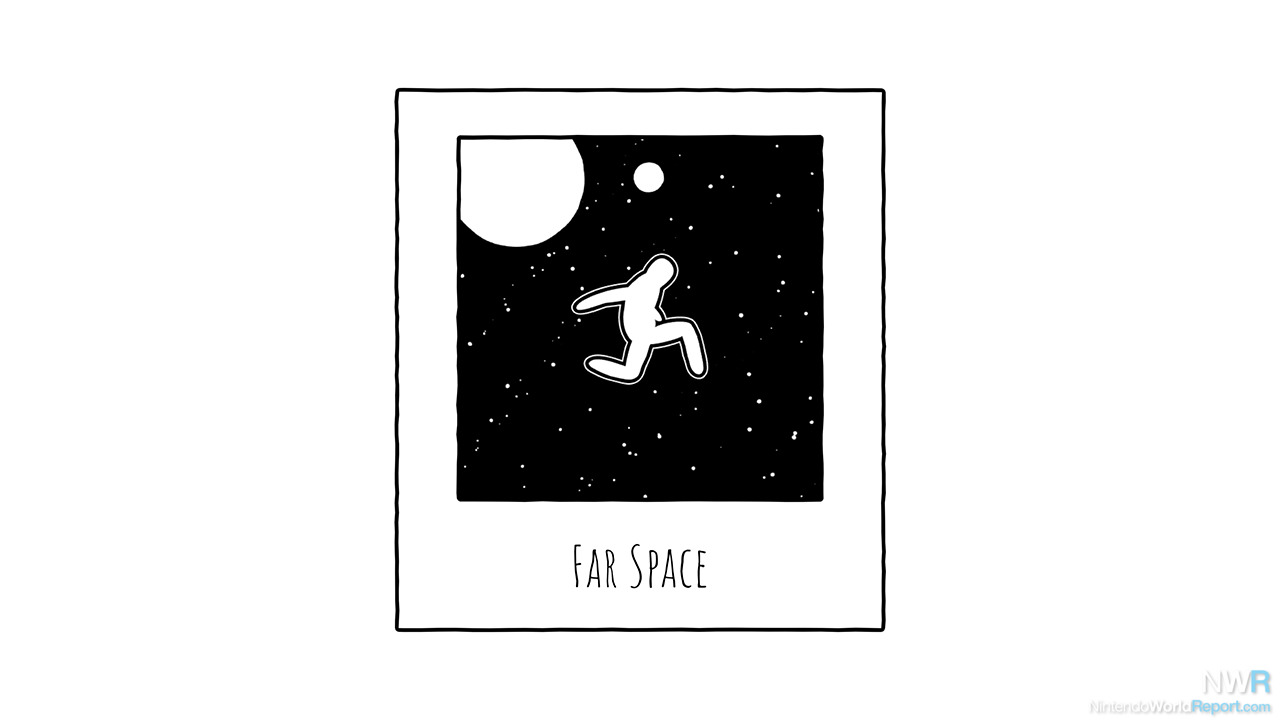 Maybe Alveole is only designed as a trophy hunting game for other platforms. You can easily knock out the entire game within an hour of play. But as the Switch has no internal achievement system, I don’t think players here will derive much enjoyment from Alveole’s core gameplay. However, if you’re looking for something to drift away with and maybe get some of your thoughts in order, I think Alveole could be a meditative experience that may present you with some new insights or relief. That particular wheel may keep on spinning long after the experience is over.