Like a flower sprouting out of the ground in the dead of night, Garden Story was one of a handful of eShop titles shadowdropped during a recent Indie World presentation. One of the benefits in terms of sales is that many players might pick up the game based on its brief launch trailer and a smattering of screenshots, both of which work in the favor of this game. The 2D, top-down perspective, basic action-adventure style, charming villages set amongst trees and flowers, and light pastel colors are no doubt enticing, but unfortunately the minute-to-minute gameplay quickly wilts on the vine.

As anthropomorphic grape Concord, you emerge from your humble home in The Grove at the behest of your friend Plum. Eventually appointed as a Guardian to protect the inhabitants of their home, Concord sets out to cleanse four separate seasonal-themed lands of the destructive Rot that has seeped into The Grove. The narrative plays out in a familiar way, with Concord assisting with the development of the Spring Hamlet, eliminating the major Rot threat there, and then moving on to Summer’s End. The fairly contained world displayed on your map grows as you explore, but each area isn’t much more than six or seven screens in size. Given that, it stands to reason that across Garden Story’s 15-20 hours, repetition would eventually set in; this just happens to come to fruition sooner rather than later. 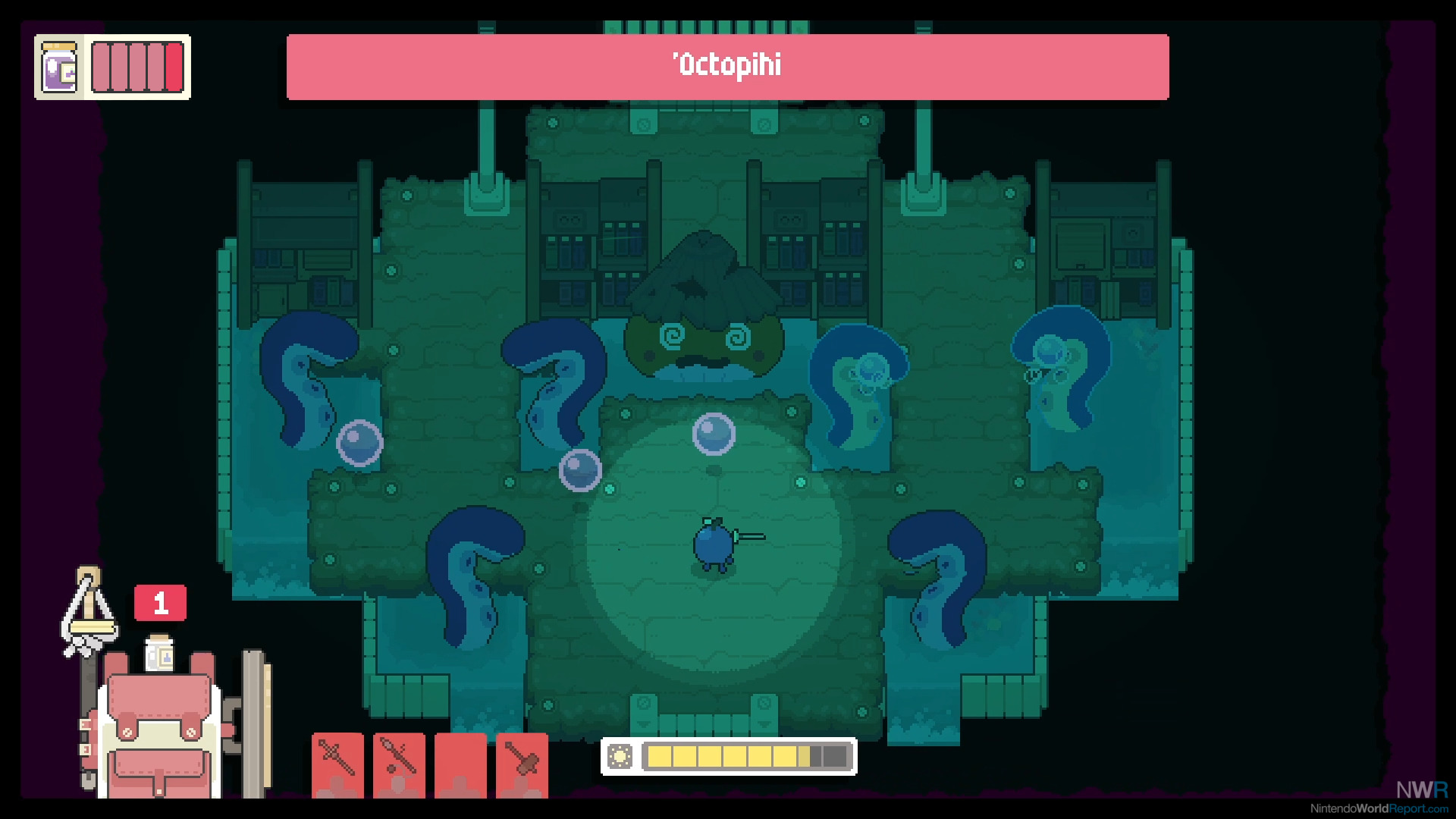 During a loose day-night cycle, you’re assigned two or three daily tasks in the morning upon waking up. Completion of each task works to raise one of three parameters for each of the game’s four towns. Increasing the level of the Conflict stat might make resources in the environment more plentiful, allowing Concord to gather more of the sticks, stones, and other resources needed to advance the main story or complete other daily tasks such as repairing fences. The tasks end up repeating themselves and become monotonous very quickly, whether it’s killing six or seven of the basic ooze enemies scattered about the world, raising the same bridge multiple times, or throwing four pieces of glass in the town collection box. Nothing is hard to do, until you realize that there just aren’t enough of a given resource to finish every task you’re assigned; then it’s just frustrating. Epitomizing its repetitive nature is a Lost Woods-like area late in the game that had me ready to flip my water table.

Concord starts off with a small life meter and an even smaller stamina meter, with sprinting, rolling, and attacking all requiring stamina. In true Zelda fashion, completing the main dungeon, with accompanying boss, in each town advances the story and adds to both meters. The dungeons themselves add a bit of variety, but each level within still just involves slaying all the foes on screen or pushing boxes onto specific tiles. A primary issue with the game’s progression is that early on while your health and stamina are low, combat is much more dangerous, boss fights in particular. You have a refillable jar of Dew that can heal you some, but it’s still very possible to fail a few times on the first two bosses. After you toughen up, though, much of the action of the game becomes a chore, even after powering up your selection of weapons. 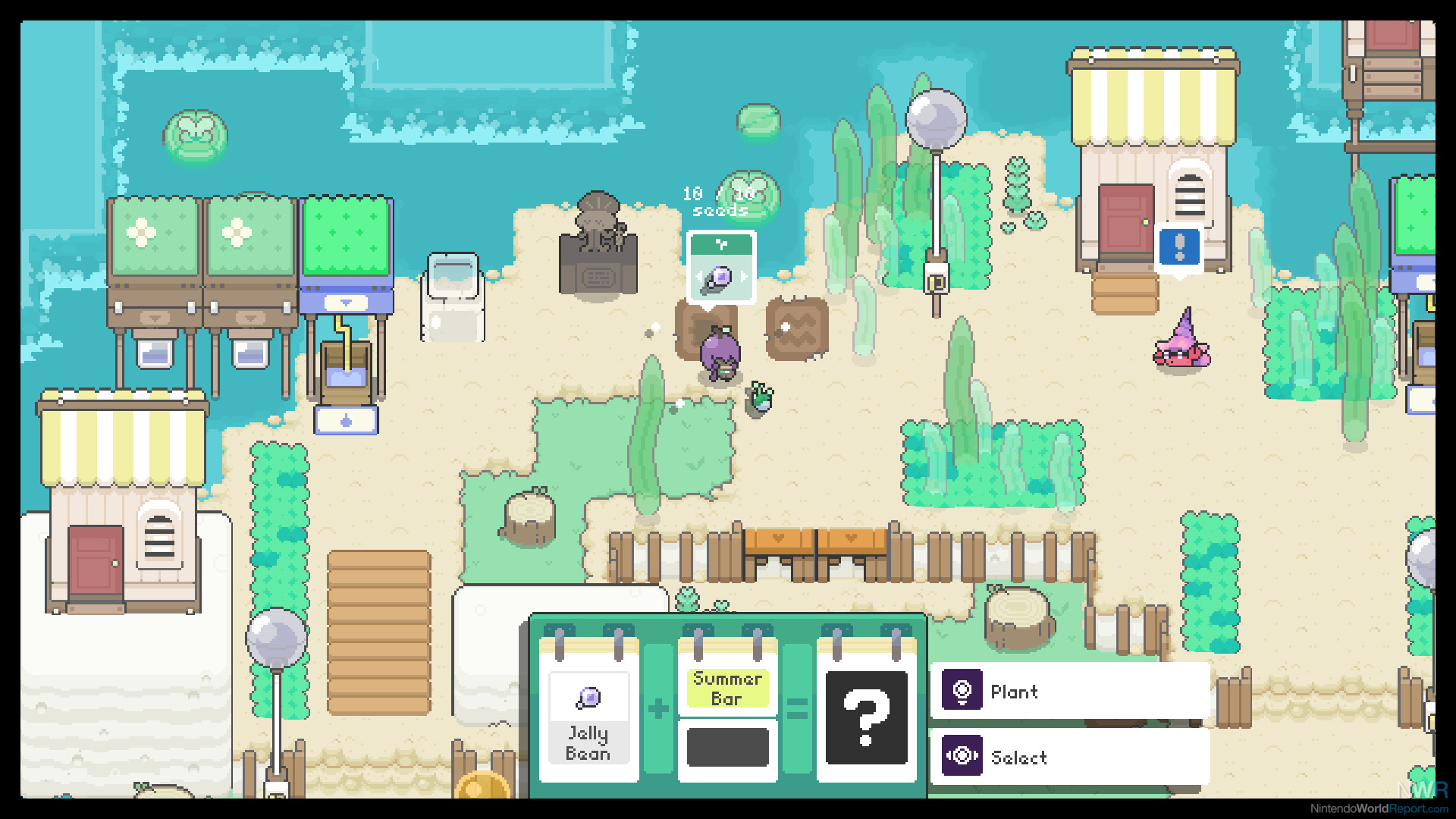 Speaking of Concord’s arsenal and toolkit, none of the weapons, outside of maybe the sickle, feel all that satisfying to use. You generally get one or more new weapons or tools in each town that allow you to overcome obstacles specific to that setting, but they lack range, speed, damage, or a combination of the three. When you’re not fighting the same enemies ad nauseum, you can eventually plant seeds in the ground that yield new resources, some of which you’ll need to advance the plot. You can also build structures around town to appease some of the fruit and vegetable-themed NPCs, but these construction efforts seem entirely cosmetic, outside of one particular project that you need to build multiple times. While you can also use your hard earned cash to purchase hats and backpacks from the stores in each town, these don’t serve any purpose either, other than changing Concord’s appearance.

The music and art style of the game are clear strengths, with the visuals being reminiscent of Earthbound or even more appropriately Turnip Boy Commits Tax Evasion, which I reviewed here. The pleasant soundtrack that plays as you roam throughout The Grove makes for chill travelling music. One presentation element that doesn’t land as well is the use of symbols and pictures to indicate key information about required resources or weapons. NPCs also tend to repeat dialogue verbatim when spoken to a second or third time, trapping you in a conversation if you accidentally (or purposely) try speaking with them again. While the map screen always displays the next main objective, you need to visit a job posting board in town to see your daily tasks, so maybe use the Switch to take a few photos when you first learn what you need to do for the day. 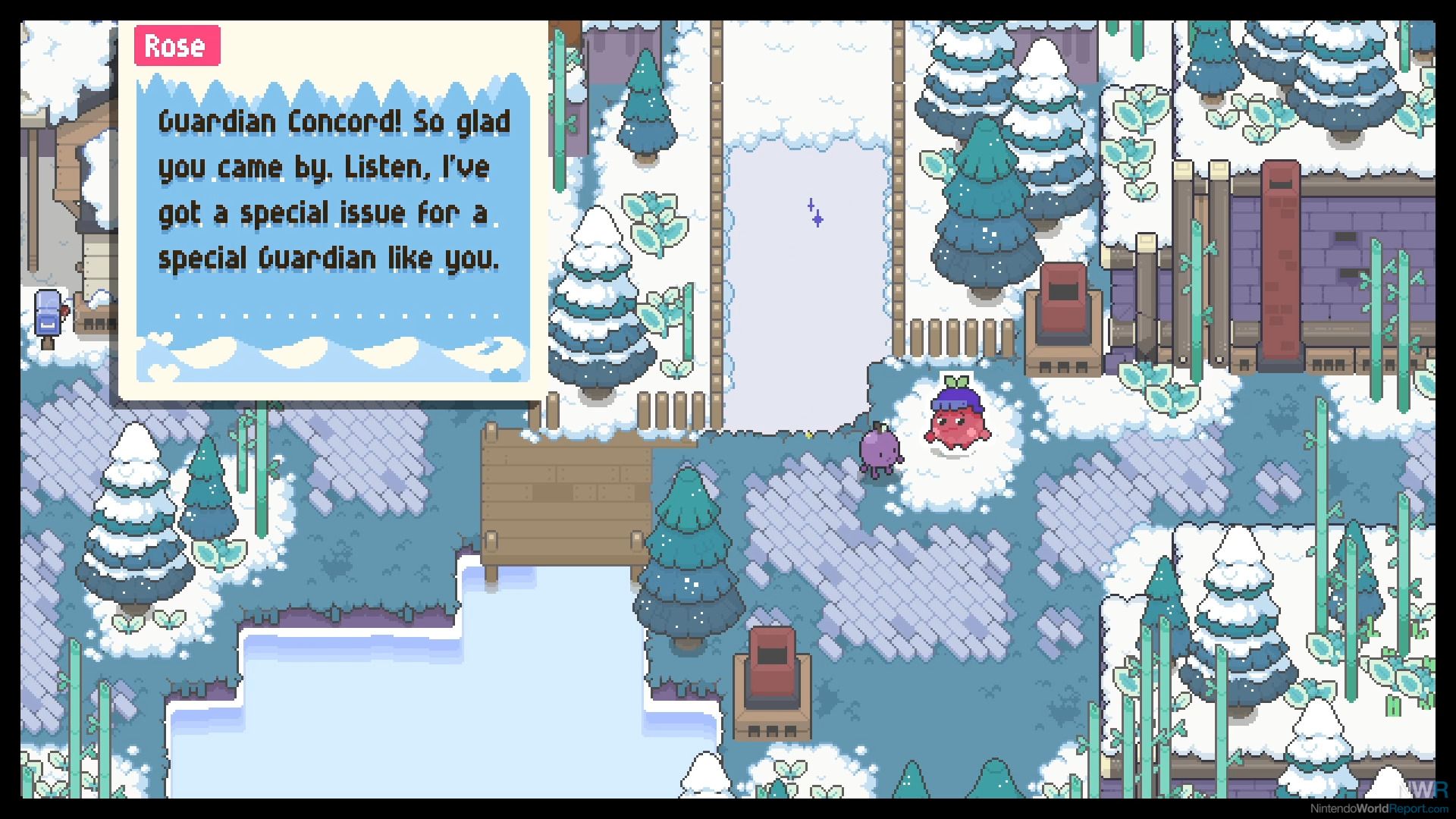 Garden Story is another title that makes a good first impression but fails to build on the early momentum it establishes. Rather than adding new mechanics or interesting twists, Concord basically goes through the motions each day in The Grove until a new area becomes available. The story and combat aren’t compelling enough to make up for the uninspired gameplay loop that starts to repeat itself far too soon. It’s a title that would have been better had its length been pruned back to 8-10 hours. Anyone looking for a particularly chill experience that isn’t very demanding may derive more pleasure out of Concord’s adventure than I did, but it’s hard to overlook how so much of your in-game work just doesn’t really matter. The downward sloping difficulty curve, boring daily tasks, and lackluster enemies make Garden Story a crop that’s not worth rushing to harvest.