Developed by one-person team Igor Sandman and published by Digerati, Guild of Darksteel is a cinematic 2D side-scrolling platform adventure game. You play as a nameless character, referred to by all as Sellsword, an immortal warrior. In this world, there is a mythical metal called Darksteel, and if a warrior wears armour made from this substance they become immortal. Sounds great, doesn’t it? The only downside to this is that the armour, once worn, cannot be removed and you are then bound to fight in wars that may not reflect your values. As Sellsword, you travel to Ravenloft, where a place called The Guild of Darksteel is a haven for people like him. However, there is an evil secret that you unveil as the story progresses.

Guild of Darksteel is heavily carried by its story and narrative. The developer adds a spoiler warning on the title screen to caution potential streamers about spoiling the narrative for others, which is why I won’t be expanding on any other details within the story outside of what has already been said. Without spoiling anything specific, as the hero of this story you seek refuge in the Guild and are then assigned tasks and missions by Heldeguarde, who will pay you and continue to allow you to stay within the Guild. As you work through these missions, you find that there is a threat planned by the so called ‘leaders’ of this world that you almost single handedly plan to thwart. 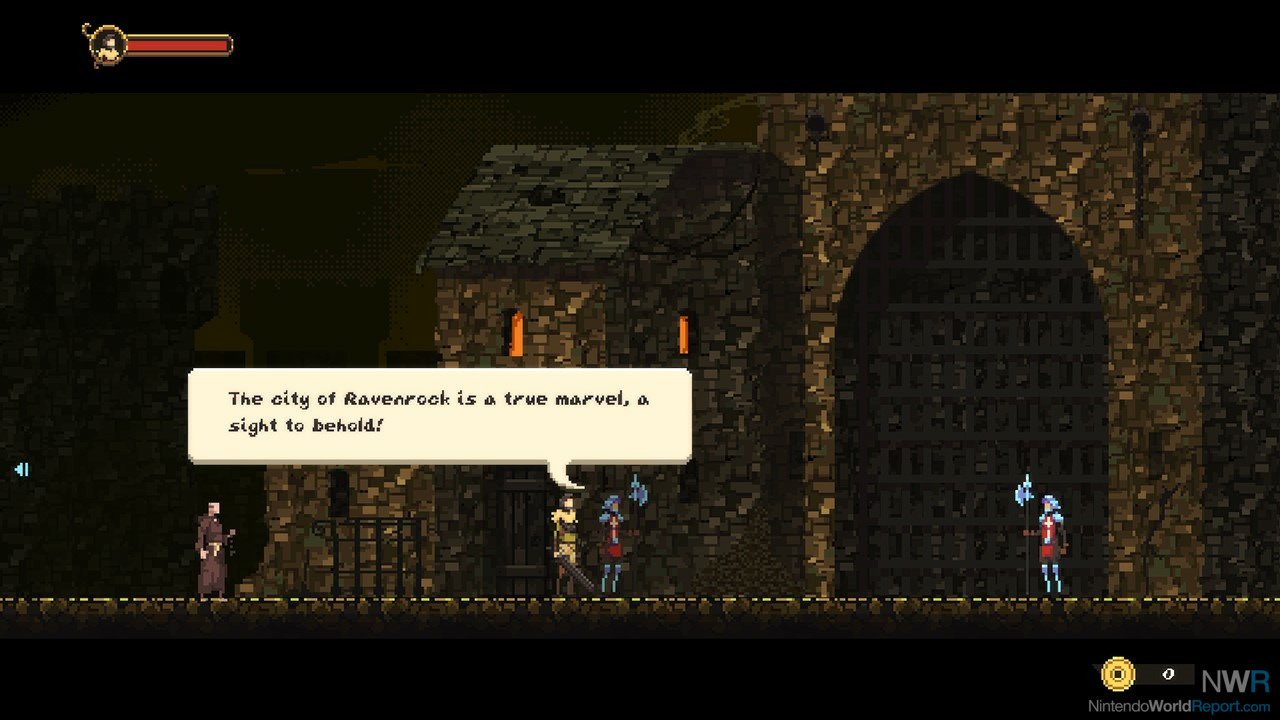 The world that Igor Sandman has created is dark and gritty, and it’s matched by some great music that is very fitting to the tone of the game. In the opening setting, you are introduced to a dark, bassy song that integrates a church bell sound, flutes, and a guitar riff throughout that adds an ominous yet fantastical feel to the game. There are moments of silence where the music pauses, especially when navigating the caverns or the Necropolis, which really adds to the tension and the feeling of being deep underground.

The minimalistic art style also feels apt given how hard the narrative carries the game, although given that everything from the character designs to the backgrounds is pixelated, it is never hard to identify where you are, what you are doing, and who you are talking with/fighting against. One thing that took a little getting used to was the font. At times it wasn’t as clean or clear as I would have liked. This wasn’t a huge issue when playing docked, but when I switched to handheld mode, it wasn’t the greatest experience. 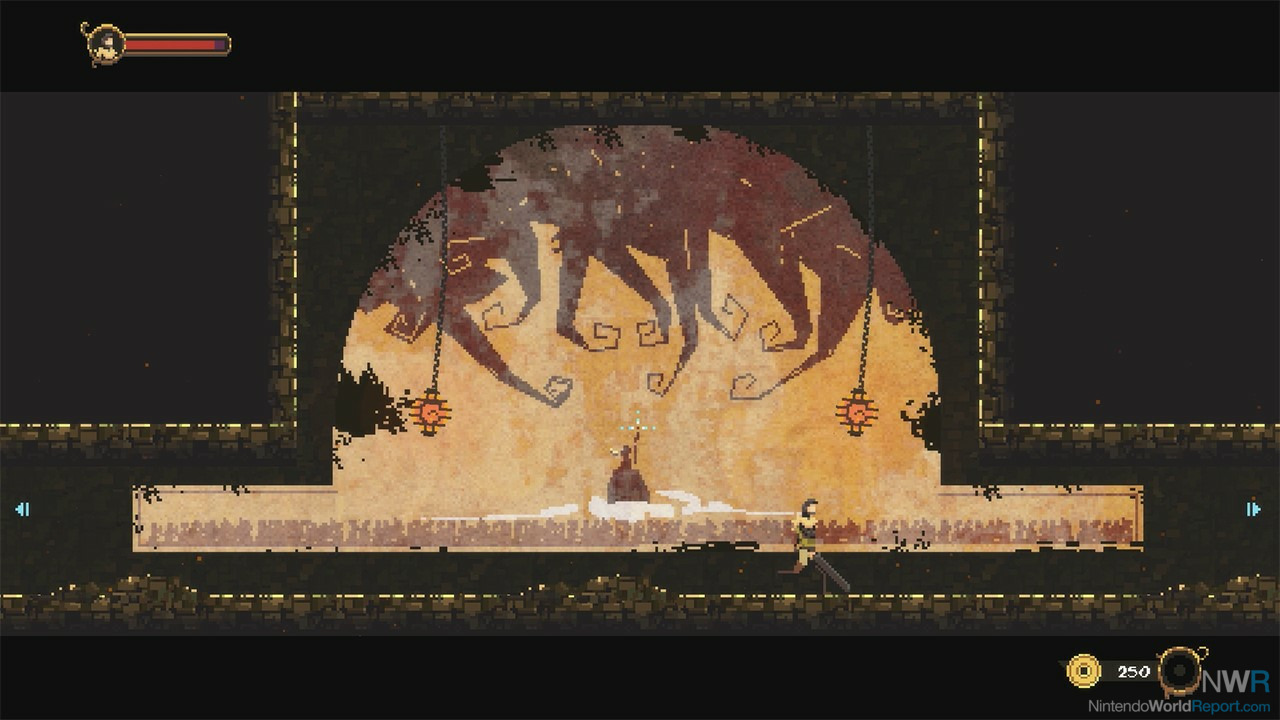 The gameplay works how you would expect when seeing shots of the game. At first Guild of Darksteel feels very “Metroidvania-esque,” in terms of level design and reliance on exploration; however, it is much more linear than expected. There isn’t much of a tutorial in terms of movement, but early on you are introduced to the battle mechanics of this game, which is triggered by making contact with a foe. Once contact is made, there is an onscreen transition that re-positions you opposite your opponent and a HUD appears at the base of the screen, with symbols beside the face buttons highlighting each action (e.g., the B button has a shield beside it to symbolise blocking and parrying). The combat is pattern-based, meaning that after the first round of combat, you can essentially work out when an enemy is to attack or block. Once you’ve figured it out, it can be rather easy to defeat your opponents, being able to time your parries and combos to ensure victory. Most common enemies that have the same sprite will have the same patterns, making for many repetitive battles in the early levels. I found myself almost zoning out at times as I had the patterns down to a tee and could defeat the enemies with ease. To add to the repetitiveness of some common enemy battles, the battle music is the same each time, and when dipping in and out of battles this one song can become extremely tiresome. Unlike the battle music, the variety of enemies does increase slightly as you progress through the game, as do the different combos that you unlock, and scrolls you discover add effects to these combos, such as health regeneration.

Around an hour into the game, I realised that you could parry mid combo, and once mastered this makes you virtually untouchable. This makes those all-too-common enemies incredibly easy to get by. The controls are quite responsive, especially during combat. I did find that when outside of battles, you had to be perfectly in line to climb up ledges and sometimes found the jumping to be clunky, though this didn’t deter too much from the overall performance. Also, once you load your New Game or your Continue from the various “save statues” across the world, there are no further load screens and the whole game runs very smoothly. 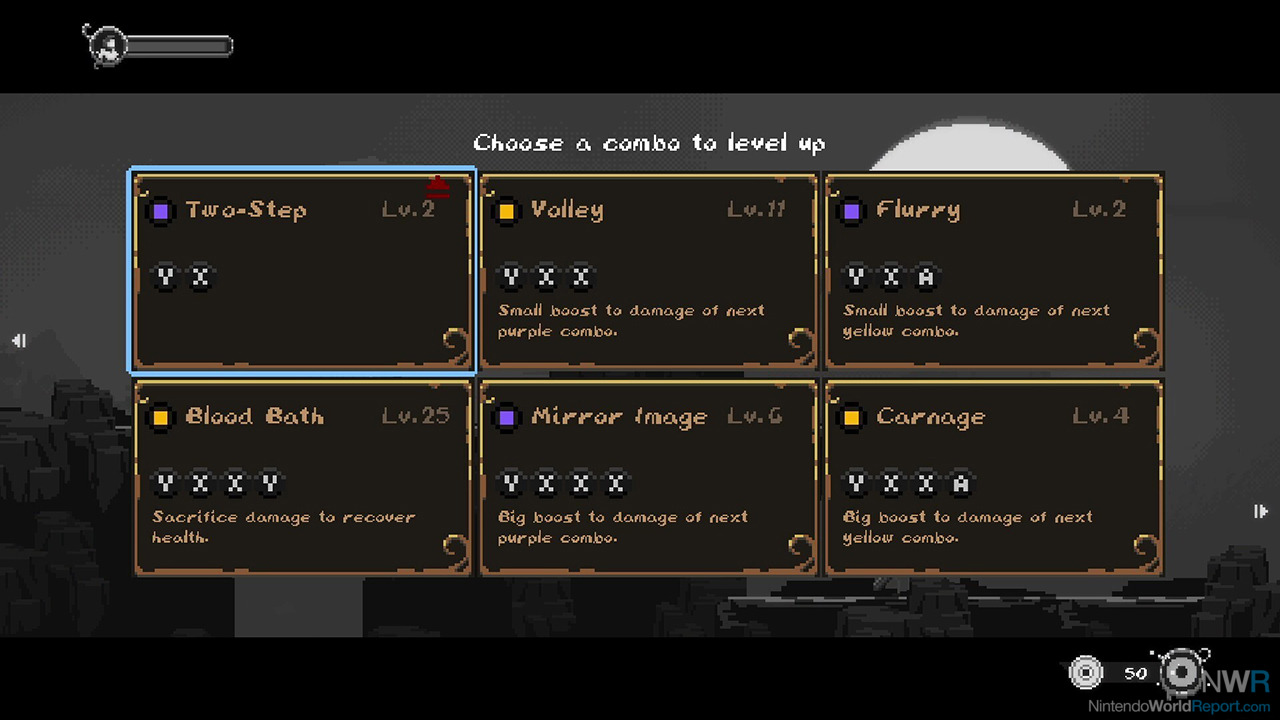 Guild of Darksteel can be beaten in around 5 hours or so; it took me a little longer as I died a fair amount (completely down to me not playing well—the game is challenging at times but not hard, per se). Overall, it offers a fairly positive experience. I enjoyed the story, but I wish that there was a little more lore regarding the world, or the main character’s backstory. The battles can become repetitive quite quickly, especially when encountering the same type of enemy over and over. It can also be frustrating if you die and are returned to a save point that isn’t in the level you are exploring. At this point, you usually have to fight your way back through all the enemies you have just been through. It really does require you to master those patterns as there isn’t much in the way of healing. Coming in at a download size of 132MB in total, the developer has managed to pack a decent amount into a small package. Aside from the slightly frustrating repetitiveness in combat, Guild of Darksteel is a gaming experience I am happy to have had. I look forward to seeing what else this developer can create in the future.