No need to bring anything else to a deserted island.

I may not be the most enthusiastic city builder player out there, but the minimalistic design of ISLANDERS: Console Edition striked me during last week’s Indie World Showcase. Building small island civilizations seemed great for pick up and play sessions. While it may not have much meat to its bones, ISLANDERS: Console Edition is addictive in its simplicity, even though it’s slightly hampered by its controls on the Nintendo Switch. 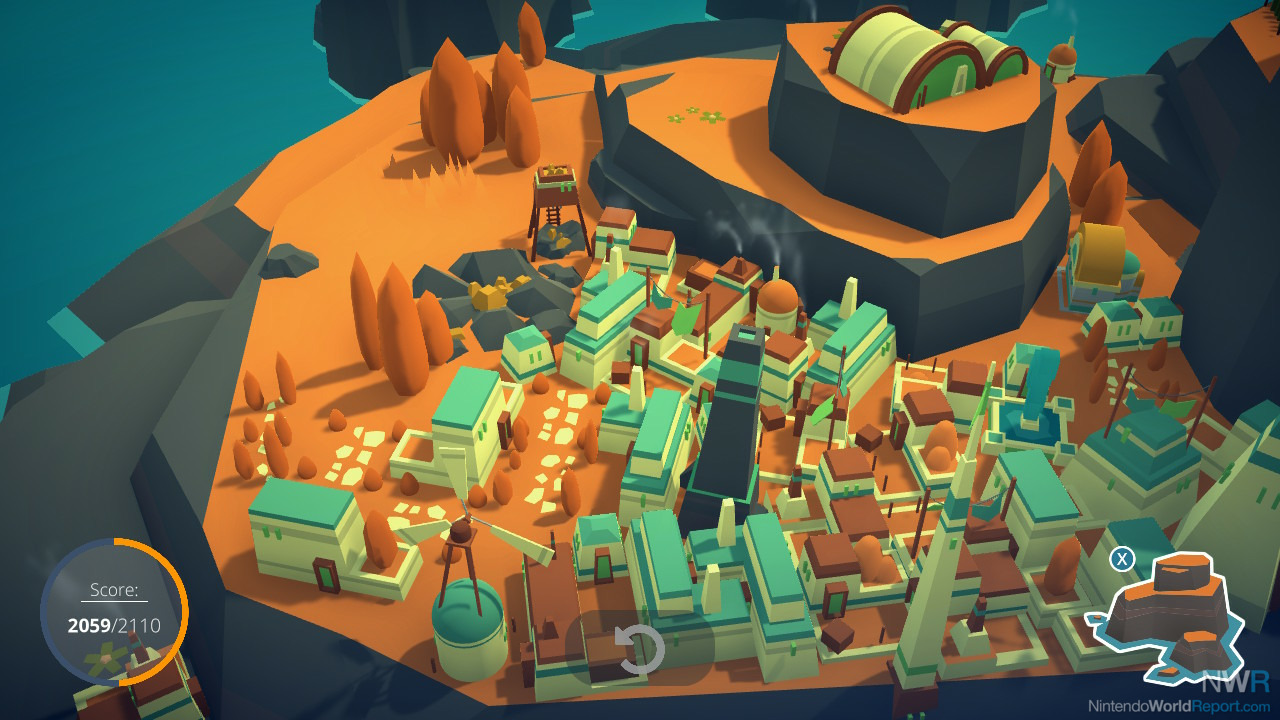 Unlike most Civilization-esque building games, the objective in ISLANDERS is not building a complex and intertwined city on several islands, but rather getting high scores by building structures in the most advantageous places. On every island you start out with nothing except a singular choice between two packs. These packs are all themed and contain structures that can be placed all over the island. The farmer pack for instance, contains a mill, some fields and maybe even a house. Each building has an area of effect, indicated by a sphere surrounding the building when you are deciding where to place it. In the beginning these spheres only indicate small points, like a windmill, that gains more points once it's placed near fields. Fields for their part only give points when placed near other fields. Points can be greatly multiplied by chaining together types of structures that boost one another. For example, houses can be placed next to each other for points, but gain more points if they are placed nearby fountains, city centers, mansions or parks. However, points are subtracted from their base score if they are located near walls or masons. Circuses for example gain a lot of points if they are constructed near houses, but lose a lot of points if placed near mansions. Slowly this city builder turns into both a puzzle game and an impressionist painting. The islands fill up over time as resources like locations for fields or mines stay occupied by earlier placed structures. The catch is that structures can never be removed or replaced once they’ve been put down. The only way to proceed when you’ve filled up an entire island is to leave the current one behind and move on to a completely randomly generated new one. 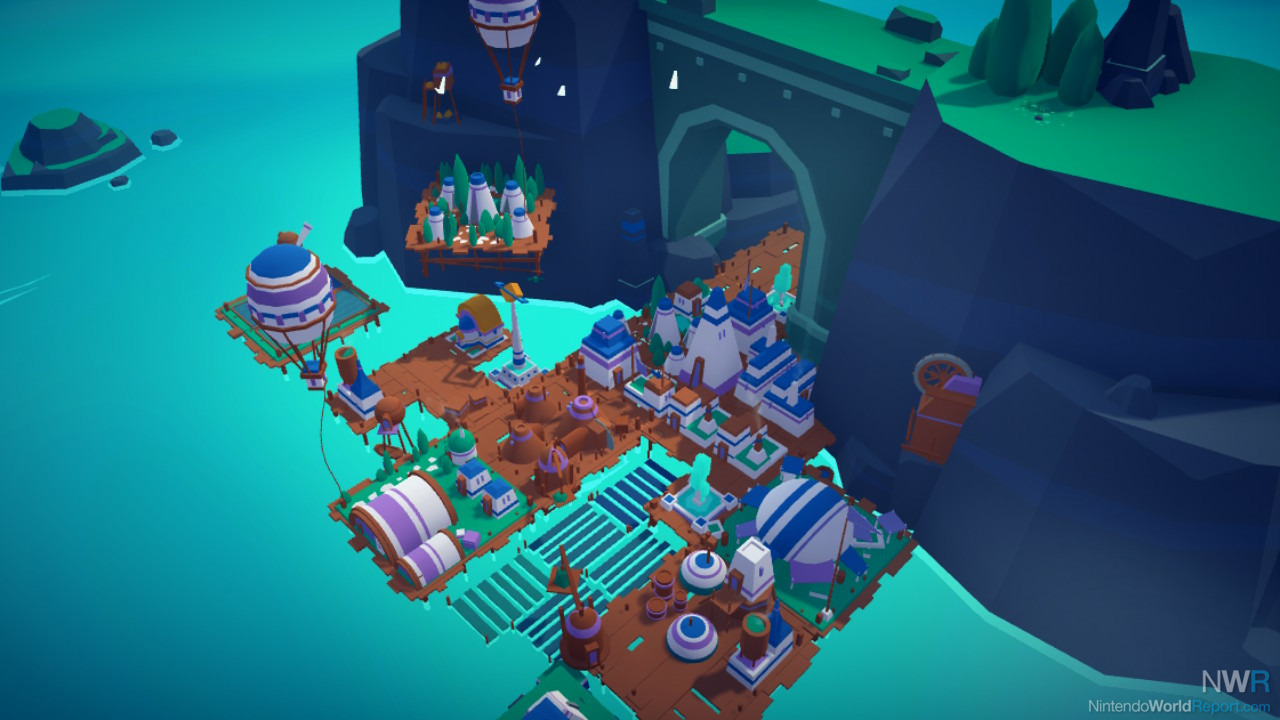 This is where ISLANDERS can either make or break your experience with the game. It can be quite devastating having put a lot of thought and effort into constructing your little island to the brim with all sorts of buildings only to have to leave it behind once the final house has been built. Thankfully, this is also where the score system comes into play. You need to cross a certain score threshold in order to receive two new packs. If you perform really well, you can unlock packs while still determining where to place your current buildings, giving you a strategic edge. However, once an island is filled up, you start completely new and have to work with new packs that are adjusted to the resources on the new island. I went from an island where lumber and stone were the primary resources, to one dominated by fishing and seaweed. It keeps the game fresh, especially because each island is accompanied by its own set of pastel-colors, making it easy to differentiate your progress. The score is carried over between islands so you can always aim for a higher score on fresh soil. Be sure to score high enough however, since a new island only becomes available if you reach another score threshold. 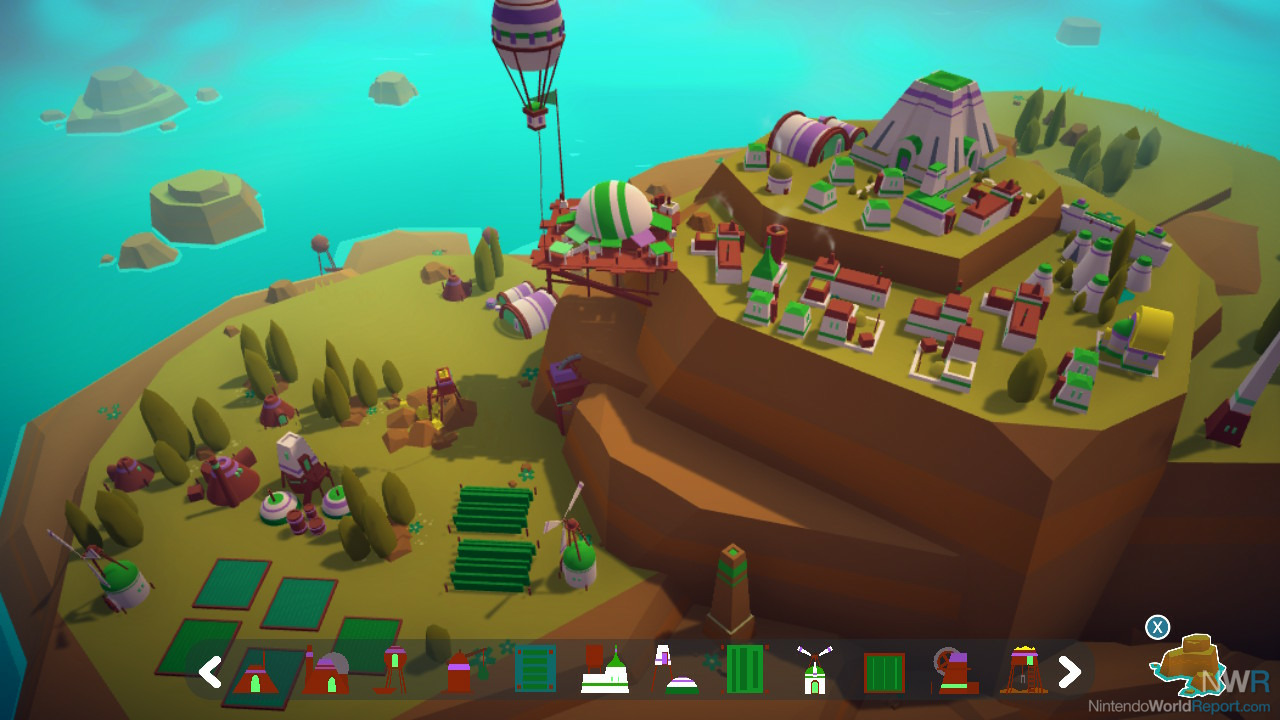 It’s this combination of abandoning near perfect cities and starting fresh every ten to twenty minutes that kept me hooked on ISLANDERS. It’s similar to a story I once heard about a vase maker. Each day he would practice and make an entirely new vase to hone his skills. But once finished, he would throw it to the ground and destroy it entirely. Even if the vase was the best he ever made, it would be destroyed so that the focus would always be on improving and honing his skills. Thankfully, ISLANDERS isn’t quite that drastic and there is always a fair bit of randomness involved with the packs you gain, but this ebb and flow of progress and renewal feels really fresh for a puzzle game that keeps a sense of linearity about it, thanks to its score system. While I didn’t really try to aim for the highest scores, I found myself understanding the game’s mechanics better over time which led me to approach the gameplay more strategically, like placing the fields first to give the windmills a bigger score increase. Unlocking packs as soon as they came available and building cities from multiple sides to make sure I wouldn’t keep relying on a singular source of points. I found it a great time to unwind after I’ve had a stressful moment. Knowing that whatever I built it really didn’t matter in the end but did provide me in the moment with a sense of direction and purpose. I can’t say that for many other puzzle games I’ve played. 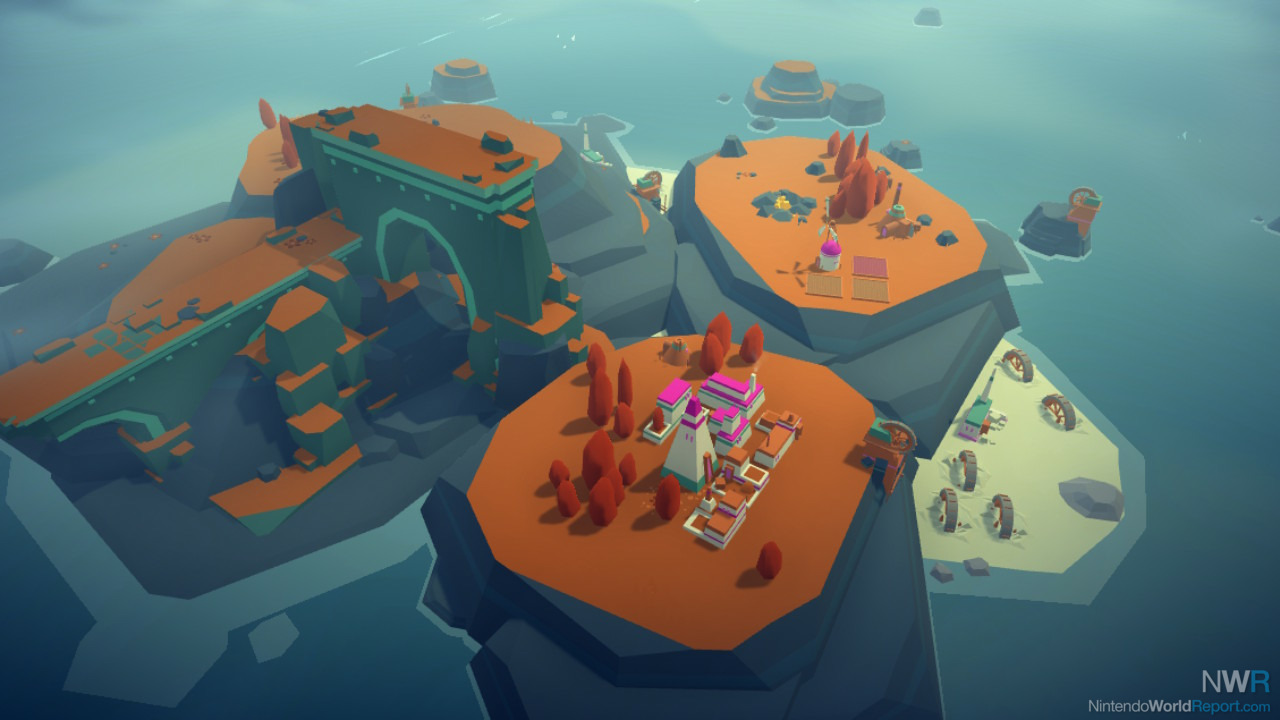 That being said, the controls on the Nintendo Switch version did take quite some time getting used to. You control the placement of the structures with the right stick, but camera movement is being done with the left stick. Generally I found myself ditching the right stick altogether and focus on using the zoom, camera rotation and rotation to place buildings, because it can be quite difficult to place buildings in between elevated terrain or in very specific places. Since scoring is determined by the spherical area of influence, placement is critical in ISLANDERS. Most often I found myself just gently nudging the left stick to precisely place a building in a specific spot, just to get that difference between 21 and 22 points. Since points are critical for progress it can be quite a chore to get structures in the perfect place. It also has to be said that the game really lacks a good manual for certain types of buildings. While the scoring system for a particular building is always visible in the top right corner, where you can actually place the building is an entirely different matter. Some are obvious, like fisheries can only be located near the edge of a body of water and seaweed farms only in the water itself. But masons can be placed on flat surfaces, as well as in the sides of mountains or even on plateaus that hover above water. Sometimes I was just confused by how to optimally place a building and since there is no grid or indication where a structure can be placed, I found myself dragging it all over the map until I found a good spot for it. Of course this knowledge carries over to new islanders, but since the packs with building types are random, it can take quite a while before you can place the same type of structure again. 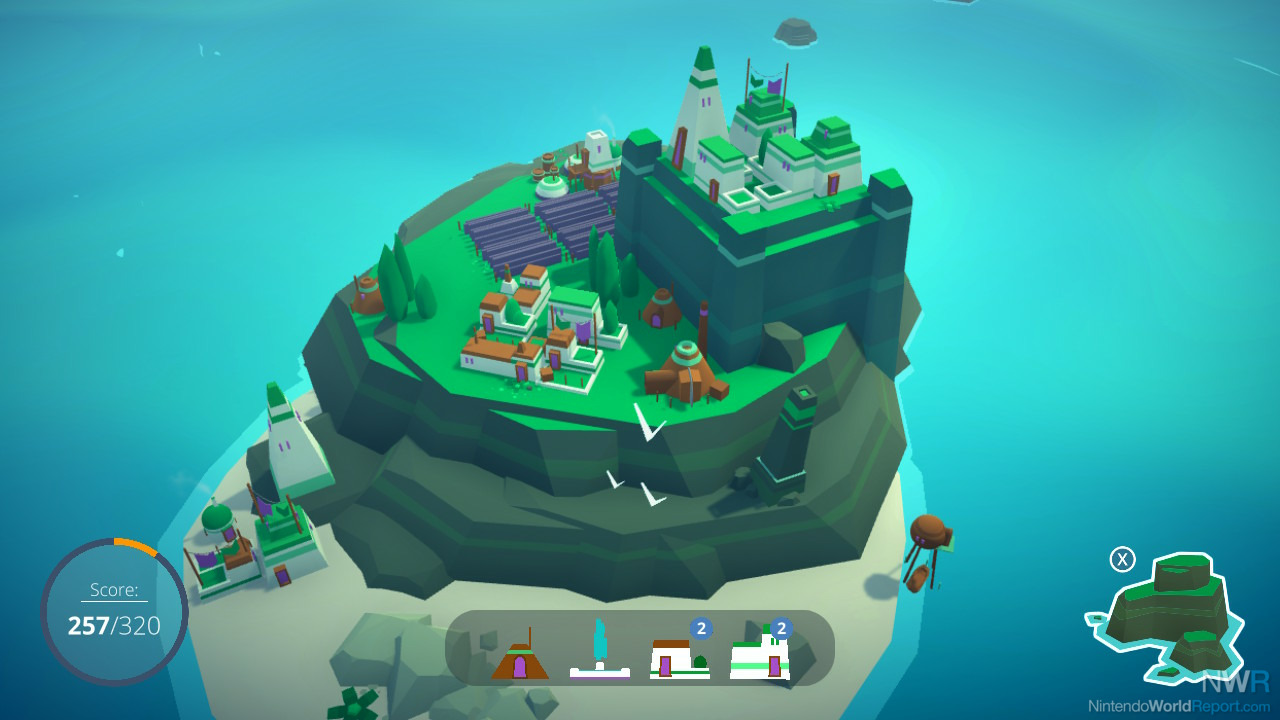 While ISLANDERS: Console Edition can sometimes feel like a slightly frustrating experience with both its core mechanic of abandoning progress and irritating controls, I’ve still found myself returning to it again and again on Switch. It’s a relaxing little puzzle game that just put me in a fantastic zenlike mood and let my brains focus on finding simple solutions to achieve my own goals. I think that it works wonders for short pick up and play sessions and as something to just keep installed on your Switch to return to over time. I wish the controls were a bit more refined and that some buildings came with a few more tips on where to place them. But for this small package, it has quite a lot of content that kept me satisfied. If you were to send me off to a deserted island and I could only bring one game, this one would certainly be on my list of choices.