Proof that beauty is only skin deep.

The hand-drawn 2D art and animation of Greak: Memories of Azur is both eye-catching and splendid. Its world and character design calls to mind indie darling Hollow Knight, but where that game is a quality Metroidvania, Greak adopts the action-adventure style to tell a tale of a plagued land and the residents who must leave it behind. Even though the character-switching mechanic that takes center stage here certainly has potential, bizarre design choices can make playing Memories of Azur feel like more of a nightmare than a dream.

Protagonist Greak belongs to a race known as the Courines, whose lives in the land of Azur have become imperiled by an invasion from creatures called the Urlags. As the scourge-like Urlags destroy everything in their path, intent on survival the Courines set out to build an airship and escape. The main story consists of both aiding in the airship construction efforts while also rescuing Greak’s siblings Adara and Raydel, but the irony of this second task is that the game is at its most enjoyable when journeying solo.

After a brief prologue section, Greak awakens in a small village where the aforementioned airship is being constructed. He is given a few tasks to complete by the villagers in addition to his main objective, rescuing his sister Adara. A map gradually reveals the larger areas of Azur that you’ll be exploring over the game’s 10 or so hours; however, within each area there’s no indicator of where you are or how the area is actually laid out. It’s fairly easy to get lost for brief spells given how similar the different rooms and spaces of each area are, and this problem is made all the worse by the way Memories of Azur handles its multiple protagonists, but more to come on that point. Because the different characters have a few unique abilities and in order to hand in completed tasks, you’ll need to backtrack a fair bit. Fast travel is available, but it costs money; considering how sparse the fast travel points and in-game currency are, it’s unfortunate that the mechanic is gated in this way. 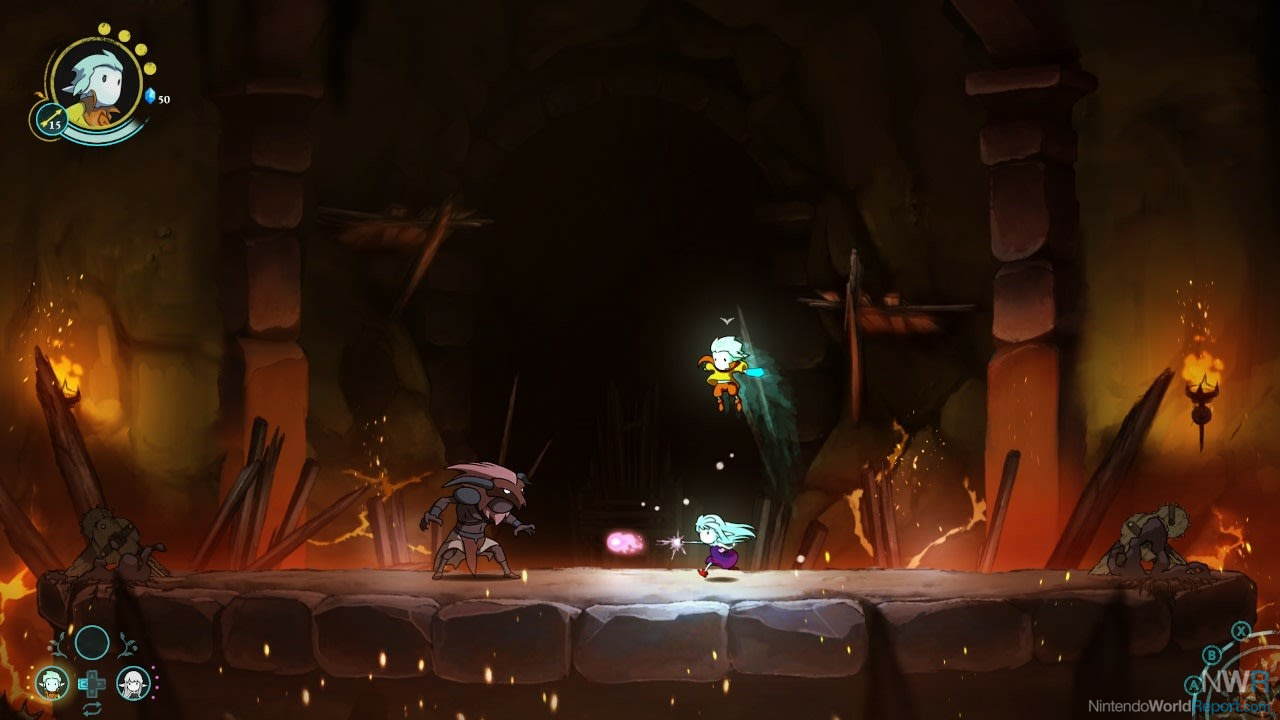 As you explore the painstakingly beautiful world of Azur, you’ll encounter a very limited variety of enemy types, in addition to a handful of bosses. Since you start off with only four hit points, every enemy encounter can prove deadly, so you always need to be aware of your surroundings and current health. Ingredients can be collected in the environment and cooked at campsites in the world to produce health-restoring dishes, but your inventory is quite limited at only four slots, a problem exacerbated by the fact that key/quest items also take up a spot in your pack. You can drop items and have Adara or Raydel pick them up, but the inventory issue doesn’t go away, especially when you’ll want each character to be carrying healing items at all times. Losing any of the three results in a game over, and since saving is done manually at not-too-common save points, loss of progress is a very real (and perhaps common) danger.

Navigating the different dungeons, forests, and temples of Azur requires solving simple puzzles. As you might expect given the character-switching focus, most of these involve standing on a switch to unlock a door, sending a character into the open doorway to stand on another switch, and then bringing the others through. Replace “switch” with “crank'' and “door” with “ladder” and that will cover a fairly large swath of the other puzzles, at least until the end of the game. Greak’s double jump, Adara’s floating and ability to breathe underwater, and Raydel’s shield and hookshot are all used in different situations, and while it may be fun to use each individual character to solve specific puzzles or navigate certain situations, their combined implementation in Memories of Azur is just baffling. 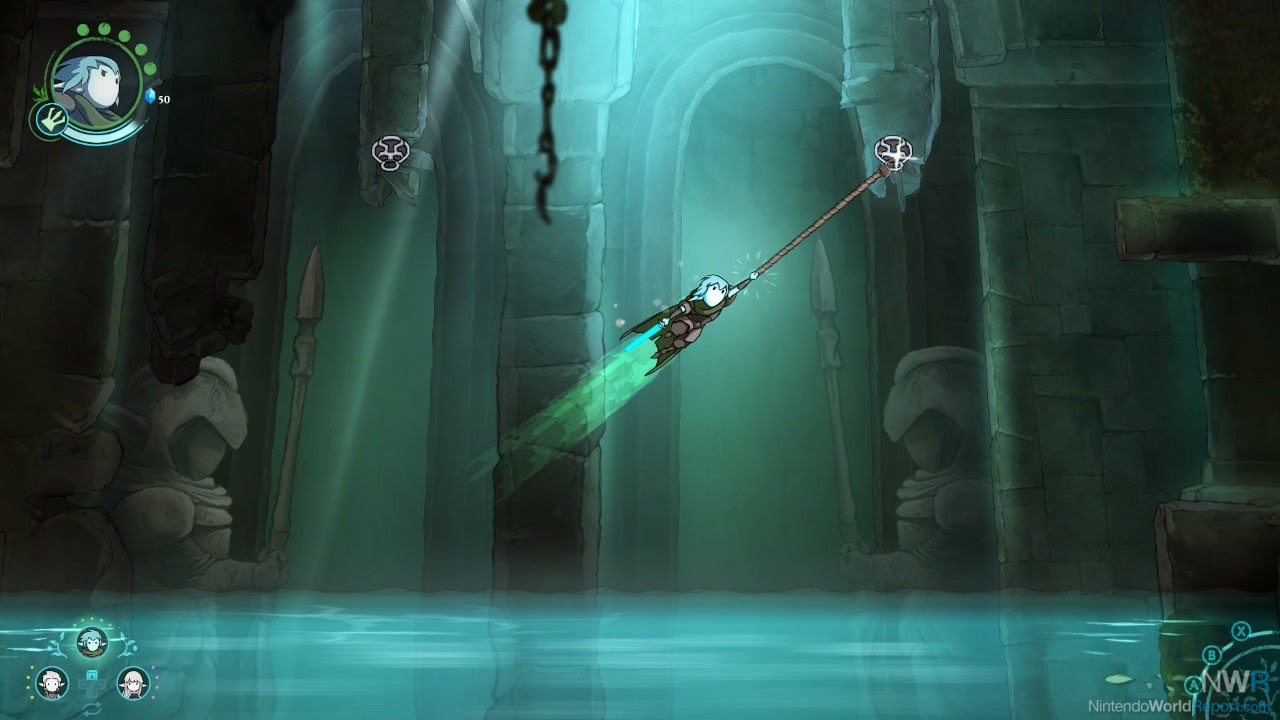 The realization that something is off, that “Oh no” moment, really lands when Adara rejoins you after the prologue. Where do I begin? Perhaps with the one good thing: the d-pad is used to switch between the three characters and it works well. Unfortunately, it’s all downhill from there. To move the characters together, you need to put them close together and press and hold ZL, bringing up a small circle that links them. As soon as you let go of ZL, the link is severed, which means you need to be holding down the button during platforming, combat, climbing, and every other action. No, characters will not follow you of their own accord. They might do some basic combat, but leaving a character by himself or herself--without the foresight to leave them somewhere safe--is probably as good as a game over. So why not just keep them all together all the time? Since Greak, Adara, and Raydel all have different jump mechanics, it becomes an exercise in frustration to keep them all together while moving through areas filled with an equal amount of horizontal and vertical movement. You might think that moving to an entirely different part of the map, which involves an exit prompt and a loading screen, might simply teleport all of the party members to the new place; you would be wrong. Pressing ZR can call a nearby character to the one you're controlling, but the range of this ability is very short.

The combat is largely fine, even if it's hampered by the issues just described. Incredibly short invincibility windows mean that you always have to stay on your toes, a task made all the more challenging when trying to manage multiple characters simultaneously or switch between them. Imagine during the heat of a boss battle trying to have Greak fight a moving target, switching to Adara, opening her inventory and selecting a healing item, and then waiting for the item to take effect, which isn’t instantaneous! Whenever possible, it might be better to just bring a single person into a boss fight, right? Naturally, boss battles won’t even start unless all members of your party are present. To say that most of my own memories of Azur are traumatic wouldn’t be far off the truth.

At first glance, it’s completely understandable to be entranced by the gorgeous environments and backgrounds of Greak: Memories of Azur. Don’t be lured unaware by its siren call! While there is a decent experience underneath, some inexplicable design decisions, the uninspired sidequests and serviceable story don’t buoy the adventure enough to make up for how badly implemented the game’s primary mechanic is. If you came away from the eShop demo impressed or you’re able to overlook a very obvious fatal flaw, you might be able to derive some pleasure out of Greak’s mission. Don’t expect to find me spending much time reminiscing about these memories.