As policy, we don’t often mention price in reviews here for the simple reason that the review is meant to be evergreen regardless of the price. And given that about 20% of the Switch eShop is on sale at any one time, that rule has only been further entrenched in this generation. That said, part of the reason why I decided to play through otome title Steam Prison is that it’s one of two games on the Switch that has a MSRP above the usual redline of US59.99 (that isn’t bundled with other games or DLC). It’s a decent read, though if it were a book I’d recommend holding out for the paperback version.

The world of Steam Prison is a world separated into the “Heights,” an area of aristocracy that would fit right into the Middle Ages, and the “Depths,” which is itself divided into a prison area for those exiled from the Heights for crimes real or perceived and several other fiefdoms at roughly a late 19th century technology level. In the Heights, marriages are arranged by the government (including dictating the number of children), which sets up a problem for point-of-view character Cyrus Tistella. Cyrus is a woman who is working as a police officer in the Heights, but is framed for the murder of her parents and exiled. Her goal is usually to return to the Heights and clear her name, but circumstances often end up with her just trying to survive in the Depths somewhere with the help of a suitor. There are six possible romantic pairings—one of whom was DLC when the game first launched on PC—and one “Grand Ending” that brings all of the suitors together. 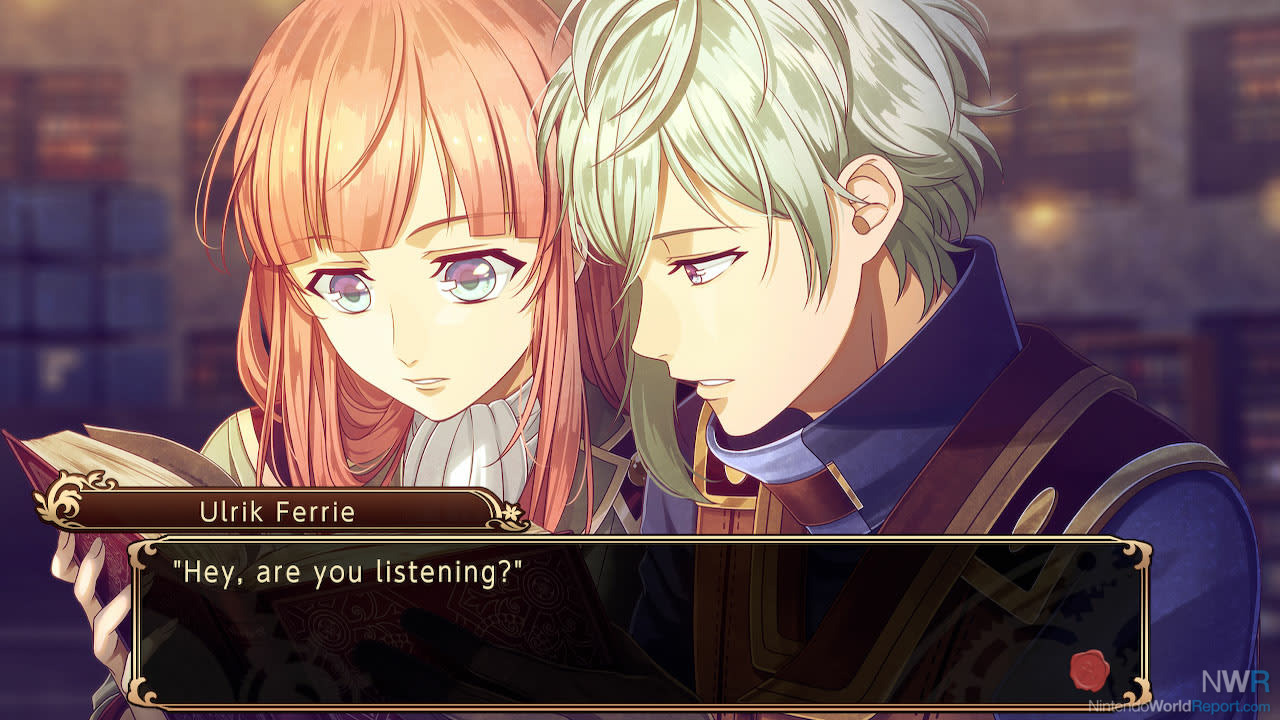 It's not clear from the screenshot, but Ulrik has green hair. And is a spy.

The arranged marriage concept feels like it was added in order to facilitate the heroine being ignorant about love, and the game is about as subtle as a sledgehammer whenever it comes up. By the end of the later routes, I was rolling my eyes whenever Cyrus would start wondering what that tight feeling in her chest was after talking about the suitor. Four of the suitors are selectable from the start, but finding the fifth requires hitting a bad end on a particular route to unlock the dialogue choice, and then the sixth (prior DLC) path came up on what I thought was the path to the finale. If you’re a completionist there are thirty different endings to pull from, but if you want to go through just to get the Grand Ending it can probably be knocked off in a weekend. I completed four routes and the finale in one day, for instance. There’s no explicit sexuality on the main endings beyond heavy kissing, but I should issue content warnings for three different endings that end on implied or pictured rape and one route that heavily involves dismemberment and the ripping out of eyes. And there’s a suitor who Cyrus is a head taller than and looks no older than 13, but due to technological handwaving is actually four centuries old.

There’s a decent variety of environments in Steam Prison, though depending on the route choices you might see the same background doing double or triple duty if you play through the game too quickly. The male characters are conventionally attractive (except for, you know, the 13-but-actually-400 year old one), though there were some scenes that made Cyrus look a bit off-model. There wasn’t really any memorable music to speak of, either. On the text editing end, there were a few typos and some odd quote placements that would probably drive our editors nuts if we put them in a review but didn’t take me out of the story.

I suspect the regular price for Steam Prison was calculated by converting it from yen directly without the normal rounding down—it’s too odd for me to think of any other reason. Was it worth the price? I had a good weekend with it, and it’s technically solid but not as fulfilling as some of the other visual novels on the platform.

A copy of the game was purchased by the reviewer… at full Canadian retail price.