Spending a week in Button City

Button City by Subliminal is immediately intriguing for people who enjoy cute games or low-poly art styles since this game contains both. The player takes control of an adorable anthropomorphic fox named Fennel in an charming pastel world of other low-poly anthropomorphic animals. The biggest question I have when it comes to games that put a strong artistic foot forward is how good the game is behind the art. In Button City’s case, it’s pretty good. 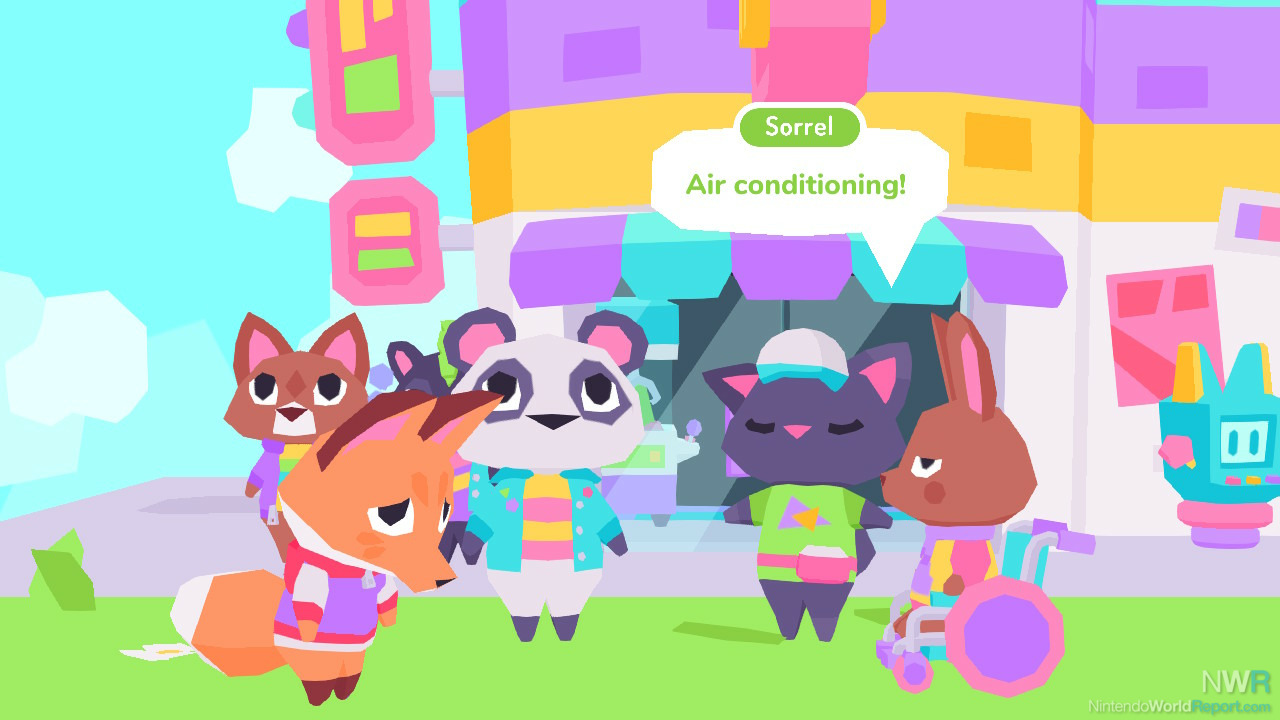 It’s hard for Animal Crossing not to spring to mind when playing Button City. A lot of the game’s visuals and character animations are remarkably similar to what you’ll find in Animal Crossing. If Fennel was dropped straight into Pocket Camp, I don’t think they would look out of place among the other chibi cartoon animals. The expressions of the cast and their reactions are essentially the same as Animal Crossing’s Reactions. When a character is surprised in either game they both stand up straighter with wide eyes. Both games make use of floating lines above characters heads to show anger or sadness. Some cutscenes feel like they could be recreated in New Horizons without losing a lot of their context.

The soundtrack is another similarity to Animal Crossing. The town theme in Button City reminds me of the 10PM theme from New Horizons. Both songs are mellow pop that sound like they’re played from a MIDI file. The town theme is my favorite song from the soundtrack, which is lucky since it’s the most played track. The OST does change depending on the context of the game. Scenes that require being sneaky see the soundtrack change to better fit that scene. More raucous scenes are backed by more rock-inspired songs. It’s a fun game to try and think of the K.K. Slider song that these sound most like since the whole soundtrack has a similar vibe to K.K.'s music.

Animal Crossing and Button City do have big differences when it comes to gameplay and structure, however. Button City is a narrative adventure game, so you’ll be traveling around the town, talking to the other citizens, and maybe doing them a favor or two to advance an actual story. Progressing through the story moves time forward and opens up more of the town that the game takes place in. There is a lot of going to one place, talking to a person, then going to another place, so be warned if you aren’t a fan of that type of gameplay loop. I don’t hate games designed this way if the writing is good, and fortunately it is in Button City.

The main story focuses on a group of friends making a competitive video game team, defeating their rivals, and then trying to dismantle a hostile takeover of their favorite arcade. It’s an already endearing premise that sticks the landing. Every member of the main and supporting cast is likeable or, at a minimum, interesting; the same can be said about the storylines that come with them. Sorrel has a penchant for doing what she calls metal yoga, doing yoga to death metal. Lavender loves cosplaying her favorite characters from Gobabots, a game at the arcade, but feels embarrassed by it. Fennel’s mom is a struggling single mother who works a second shift job, so it’s hard for her to be around for Fennel. The range of stories from funny to heartwarming to simply sad while not feeling forced is impressive. 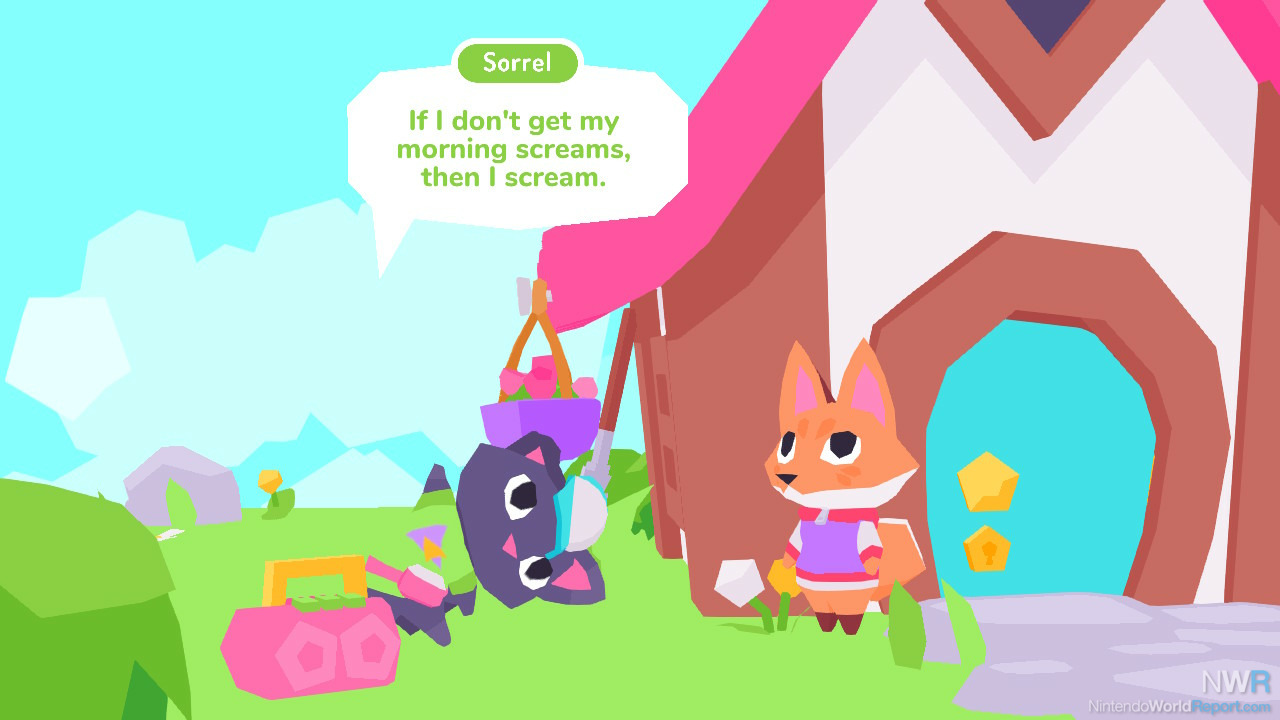 Because Button City has excellent writing is why it’s so disappointing when the developers include wholesale memes in the script. The “Let me in!” meme from Eric Andre is fully in the game. I think a well used meme is funny, but I wanted more from this team. It makes me sad that they chose the easiest joke to make when their own ideas would have been better. The number of memes as dialog ends up being a trivial portion of the script, but it’s a bummer that they wanted to use any at all when they’re clearly a talented group.

Traversing across the town is done in a unique way. It’s referred to as “Zoomie” in-game. Essentially, it’s a teleportation system where the player can teleport Fennel to a new area of the town by pressing the B button. This pulls up a list of all the unlocked locations on a square patch of land. These can be rotated to see who or what is happening on that square. Looking at the locations this way gives them a diorama feeling that I can’t recall feeling before in a game. Subliminal uses these aspects of the Zoomie system in a gameplay capacity later in the game as well as using them in what is my favorite gag in the game. I don’t want to spoil it, but I could not stop laughing when I realized what was happening. 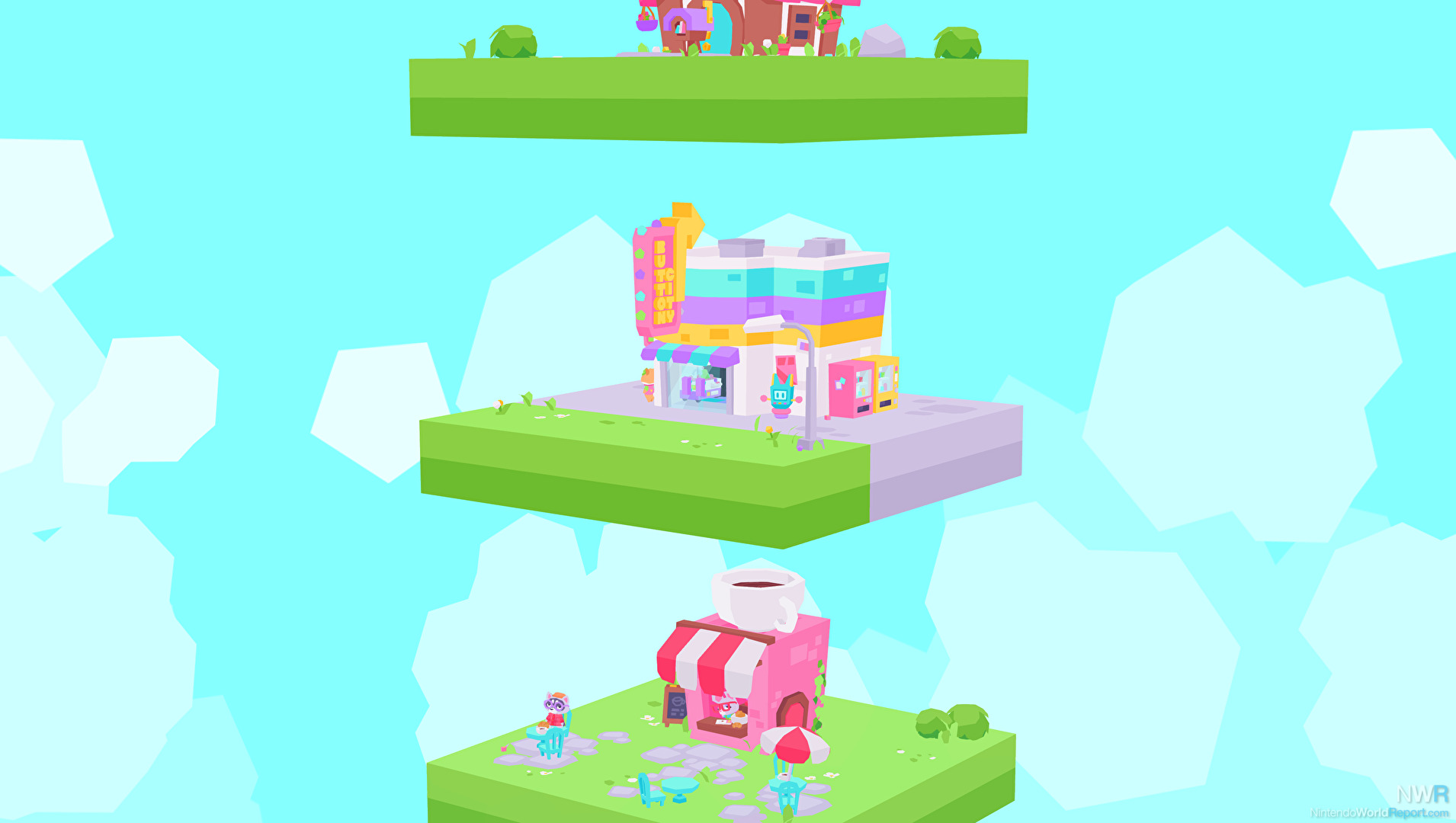 All the walking and talking is broken up by recurring minigames. There are three main games you can play at the arcade: Gobabots, a 4 vs 4 arena combat game, rEVolution Racer, a racing game based on an in-universe anime, and Prisma Beats, a rhythm game. Gobabots has the most story importance, but my favorite is rEVolution Racer; it’s the most fun mechanically. The slightly wacky drifting style combined with the boost system really dug its hooks in me. It’s also the central game in my favorite questline where Fennel helps Chive, a big fan of the anime who is wheelchair bound, mod the game to have hand controls so they can play. I like Gobabots, and Prisma Beats is a serviceable rhythm game, but I wouldn’t always agree to play them if a character wanted to like I would with rEVolution Racer. 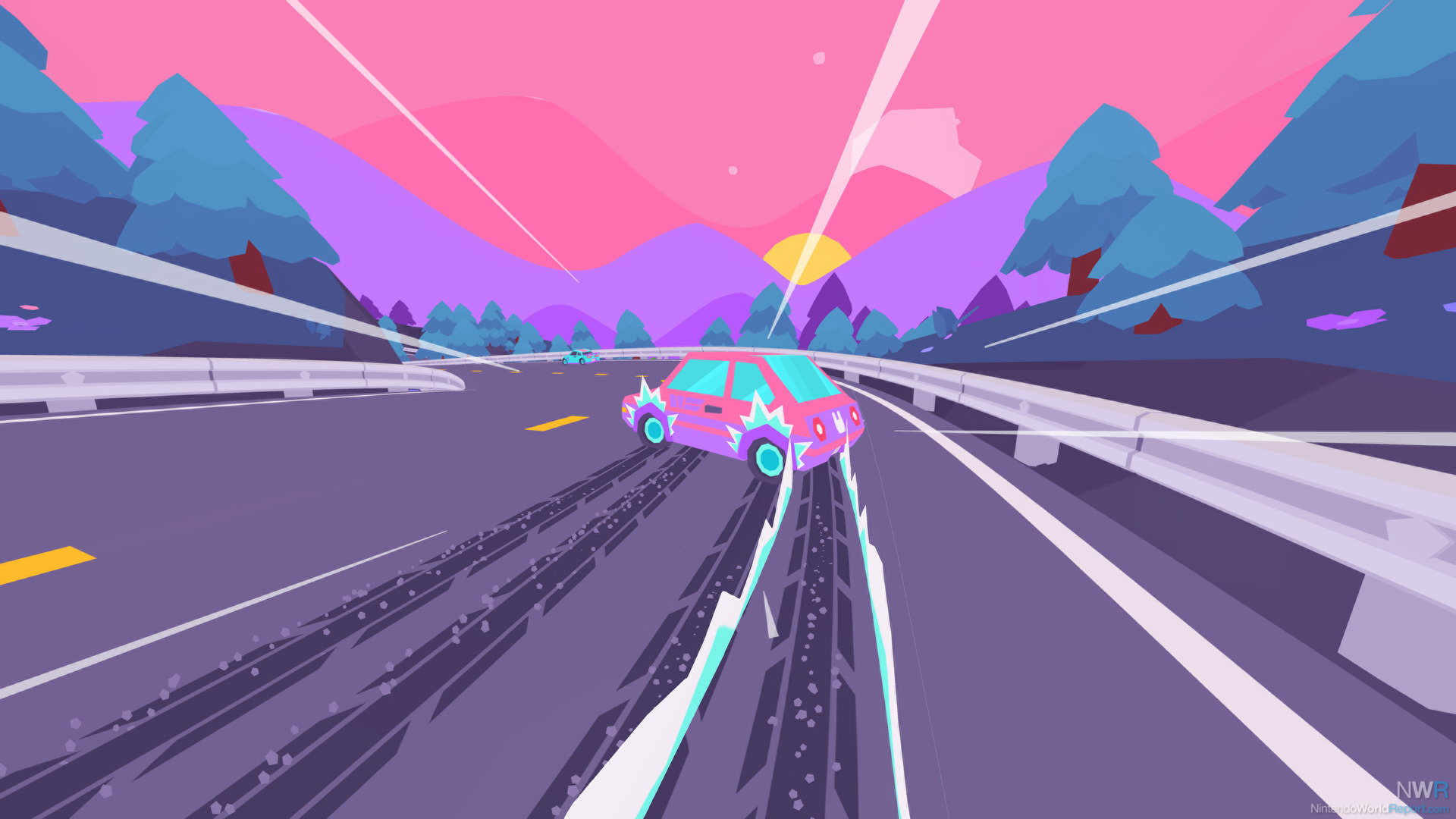 The minigames also tie into the reward for quests and exploration. Completing a quest for someone will generally give you a collectible item, like a piece of clothing, a toy, or food. It’s possible to use or display these items in the overworld, but the neatest use they have is to modify the arcade games. Collecting the rain hat clothing item will unlock a mode in rEVolution Racer where it's raining and affects the handling of the car. The Strategy Book will unlock a mode in Prisma Beats that increases the tempo based on how high a combo the player accumulates. A few of the collectible items are even used to solve quests that appear later. Button City has a rewarding positive feedback loop for exploring what the game has to offer. 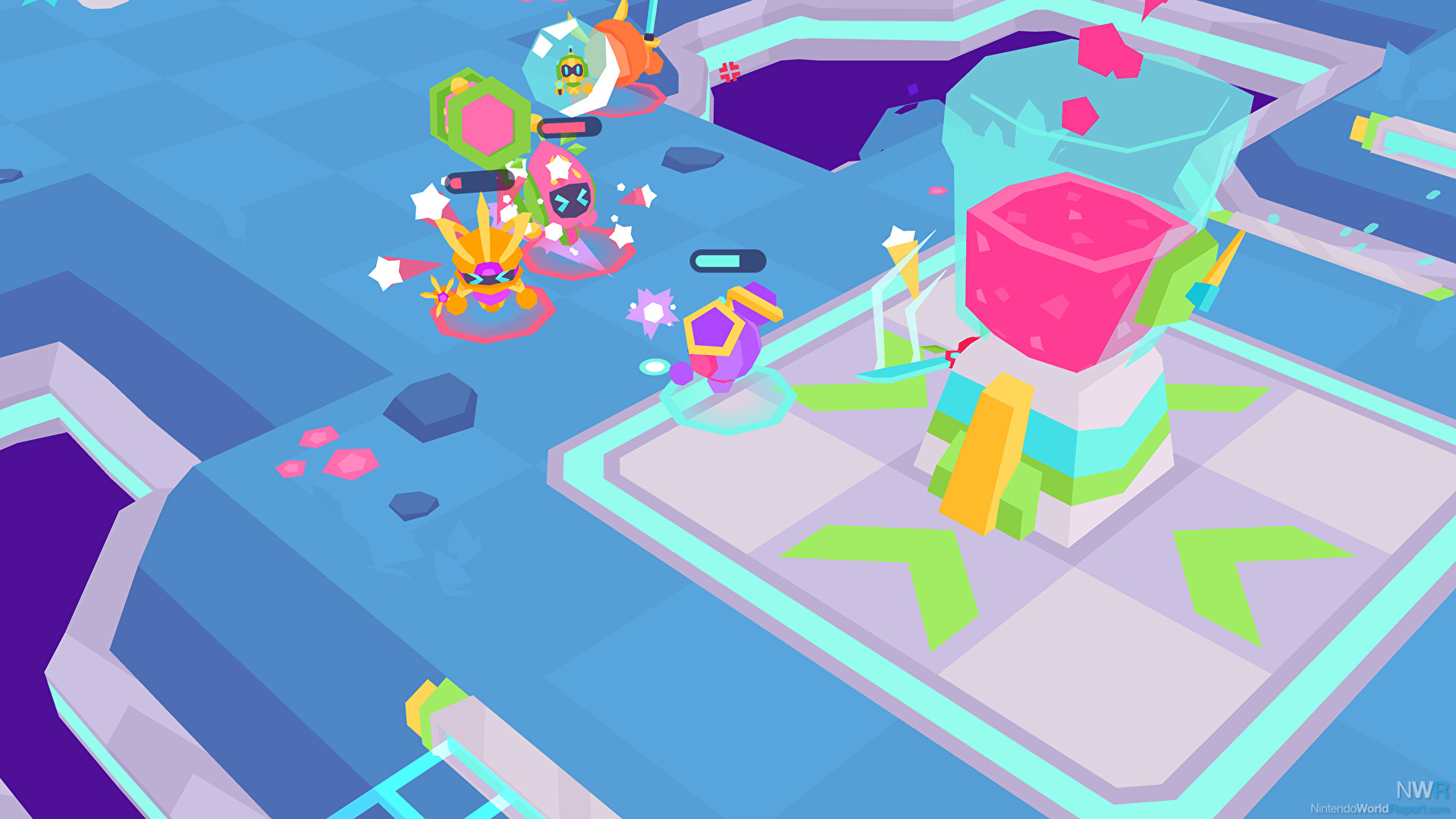 For a game that I had a lot of fun with there are too many weird technical hiccups not to mention. Animations occasionally don’t play in cutscenes: I’ve watched Fennel t-pose across a room. Interacting with doors is generally a coin flip as to whether it works or not. Talking to some people again after finishing their quest has them recite their end quest dialog even if it includes a dialog option. There were two quests that I couldn’t get to trigger despite a lot of effort to get them to. Attempting to go back to one room in particular will softlock the game. A few arcade game characters don’t have functional hit boxes. A few minor bugs I could look past, but when it is literally impossible to complete 100% of a game due to bugs, that’s a problem.

Button City provides an enjoyable time but it comes with a lot of caveats that unfortunately sully a full recommendation. There are a number of “, but…” statements after saying “I like it.” You have to be the type of person who likes this gameplay loop, and there are a couple of forced memes in the writing. You also have to look past the large number of bugs. If those notes don’t sound like a dealbreaker for you, Button City is a very good game.