A compelling card battler with enough content to fill out more than a few decks.

I was about 15 hours into Shadowverse: Champion's Battle before I learned that it was based on both a mobile game and a recent anime. Developed by Cygames, who partnered with Nintendo in 2018 on another mobile title Dragalia Lost, Champion’s Battle provides a surprisingly robust and charming experience on Switch. Having really only dabbled in Hearthstone as far as collectable card games (CCGs) go, I still found Shadowverse quite familiar, and there’s enough tutorializing to bring new players into the fold and teach others about strategies specific to the Cygames’ product. While the story itself only adds so much to the overall enjoyment, the gradual ramp up of difficulty, different types of decks and cards to build and collect, and special modes combine to form a hand that doesn't feel overplayed.

Since the narrative and packaging are really what separate Champion's Battle on Switch from vanilla Shadowverse on phones and tablets, they represent a worthwhile starting point. After choosing between a male or female avatar—each with only a single appearance option—the player is introduced to one of the game’s primary settings: Tensei Academy. As a second year student and with the school backdrop, you might expect that classes and education would factor into the everyday life of you and your friends, but nope; nearly everyone at the school just plays Shadowverse. After making friends with a few classmates, Hiro, Mimori, and Kazuki, you’re introduced to the after-school club that doubles as the group’s homebase: the Shadowverse club. From here, the game gently provides you with a couple starter decks, helps you fill them out, and runs through a few tutorial battles to give you the lay of the land. As I mentioned earlier, some experience with other CCGs made getting into Shadowverse a breeze, but the earlier hand-holding is likely to help those completely unfamiliar feel comfortable pretty quickly. 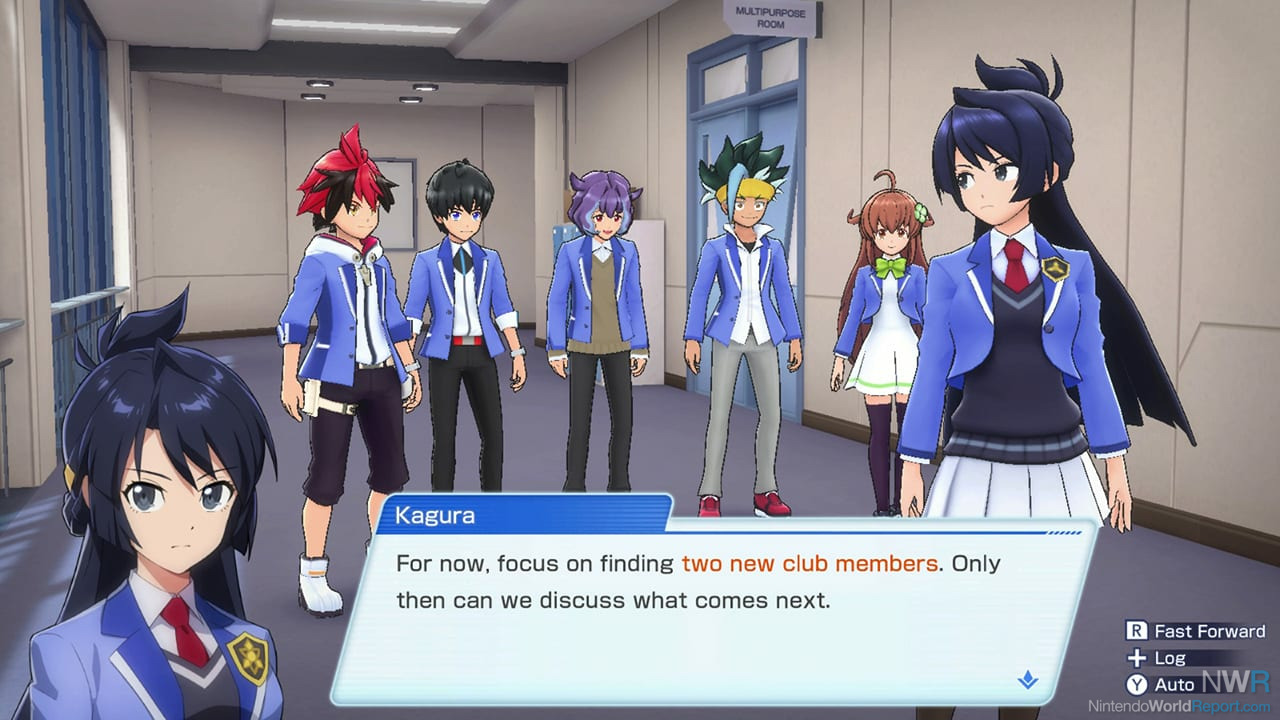 In addition to expanding and legitimizing the Shadowverse club itself, you and the other members also aim to become champion players by climbing the ranks and winning the major tournaments at Shadowverse Stadium, practically a stone’s throw from Tensei Academy. Starting out in C rank and advancing to B and then A, it didn’t ever take more than a few attempts to conquer the competition. Moving to AA, however, was a very different story, one that involved moving away from starting decks and creating new ones to deal with the much stiffer competition. Even though the story picks up steam as you rise through the ranks, it’s the satisfying card battles that really make Champion’s Battle shine, and dueling opportunities are everywhere.

From a top-down perspective and in its simplest form, you take turns with your opponent playing cards and using your cards to attack your opponent’s cards or their avatar directly. After seeing which player gets to go first, you can exchange up to three cards from your hand of three for different ones. The player who goes first has a speed advantage, and so the second player to act is awarded an extra card on their first draw in addition to an extra evolution point (more on those in a bit). Every turn, the acting player draws a card and can play cards based on their mana cost, with a player’s mana pool starting at one and increasing by one each turn. In addition to creature cards that have an attack value and a defense value, other cards function as magical spells to buff your cards or destroy your opponent’s played cards, or even charms and amulets that have a persistent effect. Many creature cards have special powers beyond their ability to do damage or soak it up: some can attack as soon as they’re played; others gain or pass on stat buffs under specific circumstances. After the fourth or fifth turn, players earn the ability to “evolve” one creature card that they’ve played, which usually raises its stats and also allows the creature to attack immediately. Some creatures even activate their special powers upon evolution. It might sound daunting from this lengthy description, but wait… there’s more! 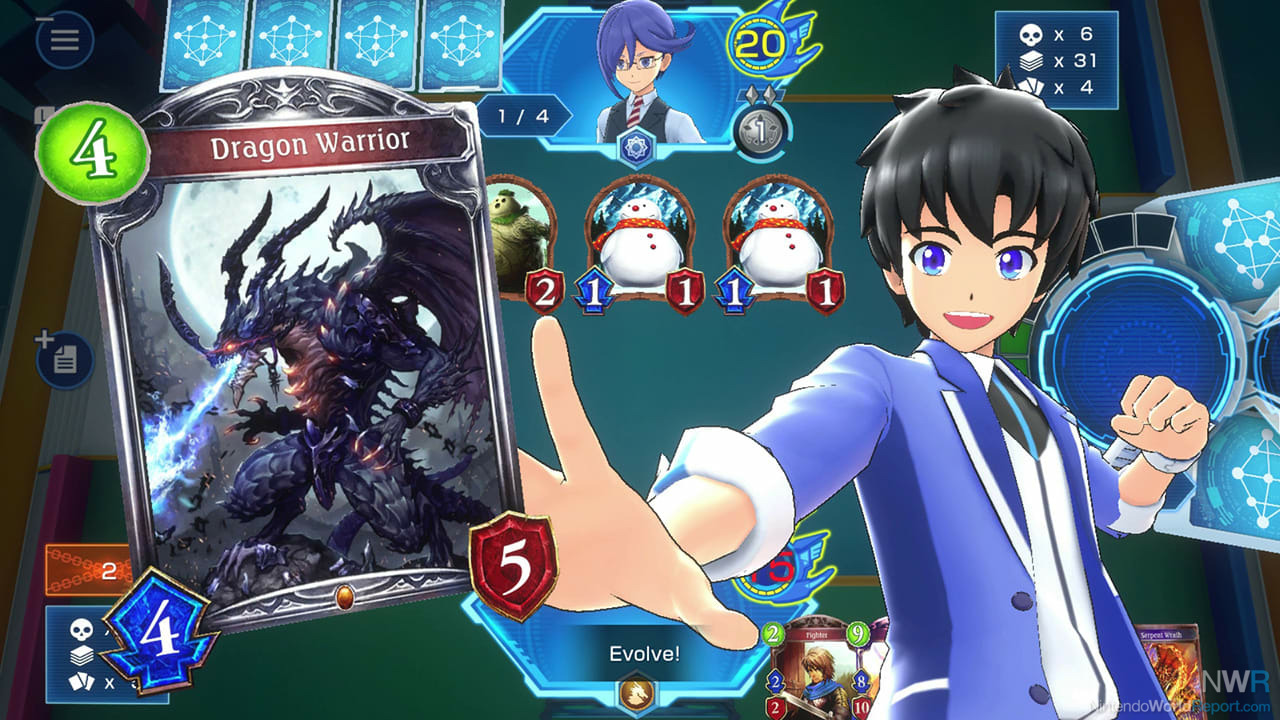 Each deck of 40 cards you bring into battle falls under one of eight classes, and this determines the types of cards you can play. Champion’s Battle starts you off with two Dragoncraft decks, and these are generally enough (with maybe a little tweaking) to see you through the first few ranks. The special feature of the Dragoncraft class is that once you reach a mana pool of 7, you enter a state called “Overflow,” which powers up many of your Dragon cards. Other classes, like Forestcraft and Shadowcraft, have their own unique traits and playstyles. In addition to winning cards from your opponents, you can also collect money to spend at kiosks throughout the city. At each one, you can purchase from a selection of individual cards or random packs that can be opened later.

Whether victorious or hanging your head in defeat, you earn experience towards the specific class you used, with level ups awarding currency or new cards. NPCs offer fairly rote sidequests to complete, but your fellow Shadowverse club members have their own bonding quests that are a little more involved and lead to special scenes with them. At all times, your objectives are displayed on the main screen or the map screen, making it almost impossible to get lost. The main objective, sidequests, and bonding missions are all clearly displayed, and if that wasn’t enough for you, your fellow schoolmates and even random people around town will often be up for a Shadowverse duel. At higher ranks, former opponents may even have a new deck in Hans, ready to put up more of a fight a second time around. Shadowverse Stadium even offers over 100 puzzle battles to complete. It’s easy to get sidetracked from the overall story with all there is to do, provided you’re actually into the card battles. 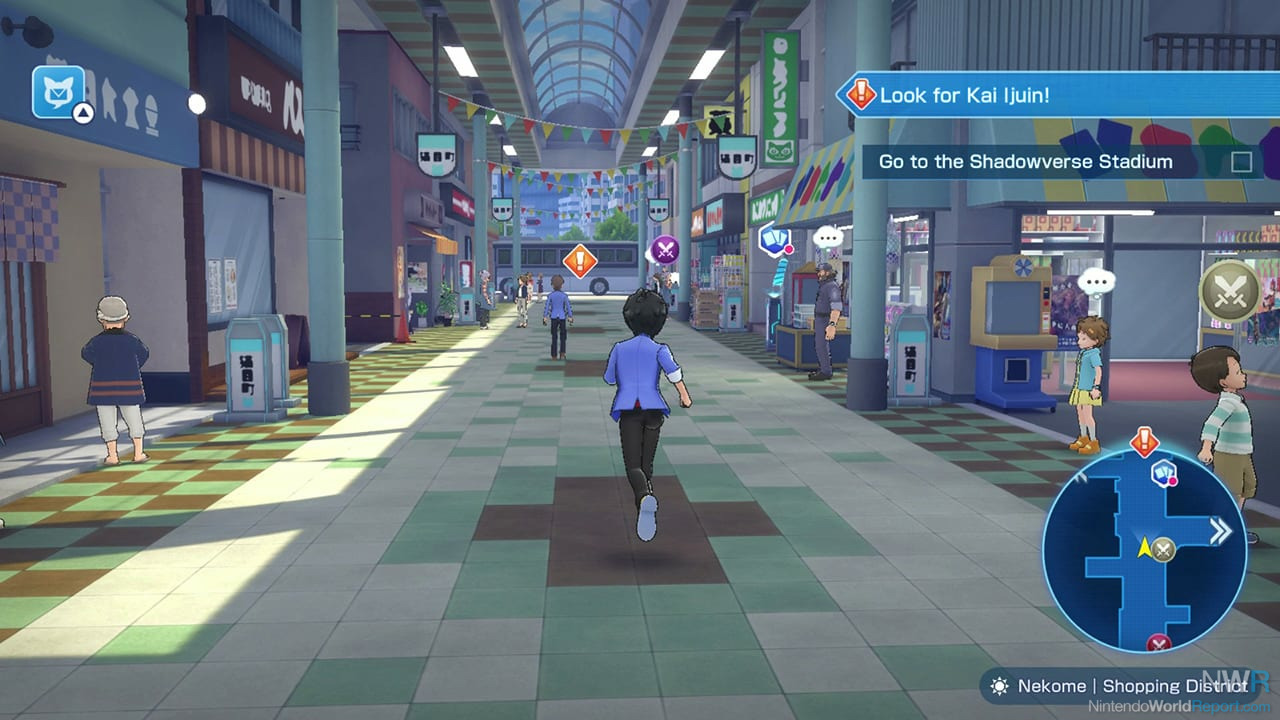 Focusing the spotlight on its presentation and performance, the load times are generally brief, with the notable issues being some characters and objects popping into view only at a very close distance and a bit of visual stuttering upon entering a new area. The card battles don’t seem to run quite as well as when playing on PC or mobile, but the Switch version is perfectly fine. Menus load up smoothly and quick travel allows you to visit the different areas around the town with ease. In addition to scores of sidequests, dozens of achievements and online play add replay value and longevity to the title, and it’s safe to say that Champion's Battle has actually gotten me more interested in trying out the mobile version.

While the look of the characters and the way you navigate the world calls to mind some of the recent Pokemon games, the card battling seems very much inspired by Hearthstone. I haven’t played enough of that to compare the two more thoroughly, but I can easily say that I’m coming away from Shadowverse both impressed and eager to see and learn more. Even if some of these feel like window-dressing, the sheer amount of voice acting, the light story, and the rankings and tournaments hooked me from the get-go and kept me invested for dozens of hours. Collecting as many new cards as I could and theory-crafting new decks and ways to play old ones is a captivating endeavor, made all the more accessible in Shadowverse: Champion's Battle. Anyone with an interest in CCGs or even Pokemon should at least try the playable Switch demo, or even the mobile game to find out if this is a universe worth exploring. I, for one, am happy to step out of the shadows and champion its cause.