A loving tribute to pixel-focused Sega consoles in a dependable puzzle format.

After a few months, developer Jupiter has returned to the eShop to release another PIcross game. If you’re familiar with the picture puzzle nonograms, it’s likely you know your way around the numerous Picross S games on the Nintendo Switch. When I last reviewed one of those games, I commented that it felt like Jupiter was just spinning their wheels with these releases. The puzzles are good, but nothing was really changing in each iteration. That remains the case with their latest release, Picross S Genesis and Master System Edition (or whatever Sega’s first and second home consoles were called in your region). But a dose of Sega-laced nostalgia is enough to invigorate the puzzles for me, even if the act of solving them and the types of challenges aren’t different from April’s Picross S6. 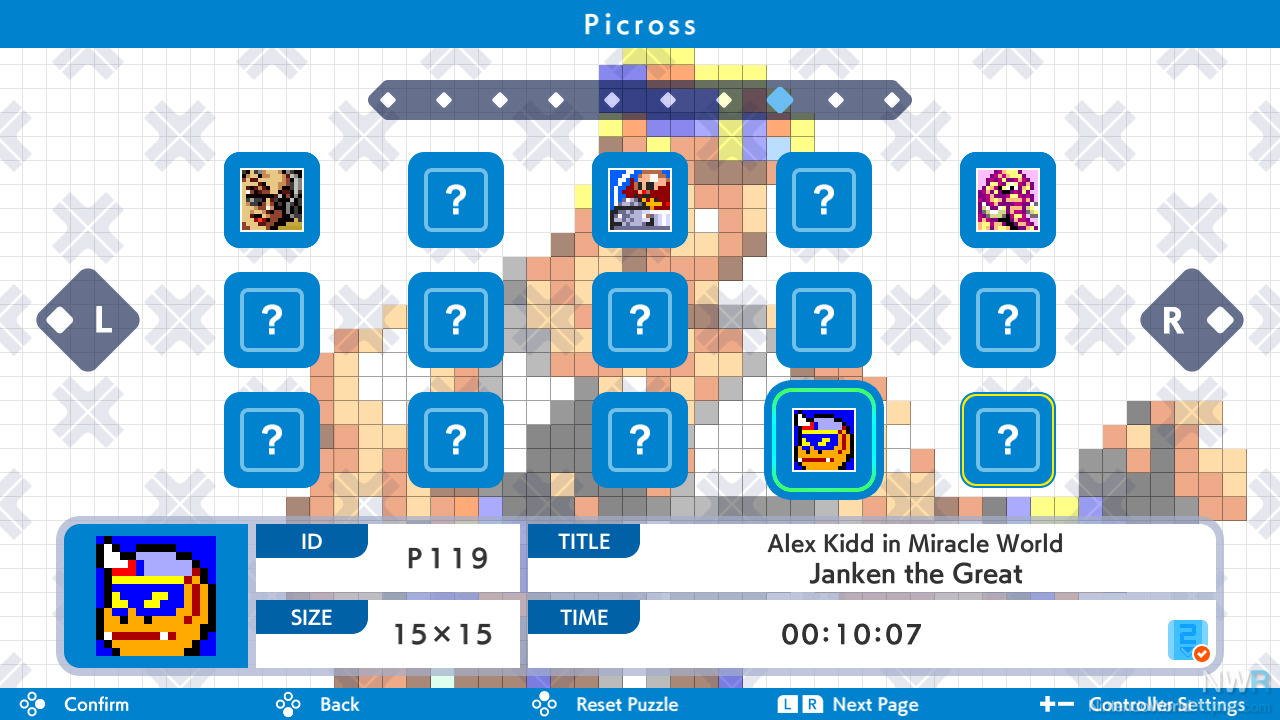 The interface is unchanged from the Picross S games. The same good tutorials are present as well as the main modes. You have 300 traditional Picross puzzles, 30 Color Picross puzzles, and 150 Clip Picross puzzles. It’s technically down five puzzles from Picross S6, but that’s just because this version does not have a save data bonus for giant-sized puzzles like the recent S releases. The most important part of the Sega Picross game is the fact that every puzzle is a character or object from a Sega game from the Master System and Genesis era. 59 games are represented, including multiple Sonic the Hedgehog games, the Golden Axe trilogy, OutRun, the Phantasy Star quadrilogy, and even Dynamite Headdy. It even has Japan-only releases like Record of the Bahamut War, which is cool to see even if it resulted in me finishing some puzzles and having to Google what the heck the game was.

The Sega references also extend to the background music, with a few good chill songs from the era making up the game’s soundtrack. It’s nothing extravagant, but it’s a nice touch. Seeing more Sega nods work their way into the game would have been great, but what’s there is totally fine.

Like the oodles of Picross S games before it, Picross S Genesis and Master System Edition is another great entry in the series. It still lacks touchscreen support, but if you have any fondness for Sega in the late ‘80s and early ‘90s, this is a treat to solve all these nostalgic puzzles. I only wish this was more than just a Sega-skinned Picross S game, but if quality nonograms with a reliable interface is the biggest problem I have with this game, maybe it’s not actually a problem.