The Switch has become the home for genres I enjoy that are seen as passe in 2021: the JRPG, the visual novel, and the Japanese adventure game most prominently. However, the Switch also has one of the best libraries of scrolling shooters outside of the arcades between the Arcade Archives and other eShop releases. The Darius series of multi-screen shooters dropped a couple of compilations last year, and another one (G-Darius HD) is due later this year, but DariusBurst: Another Chronicle is an above-average shooter that’s probably going to get upstaged by everything else that shared its Western release date.

There is a perfunctory attempt to create a story around the games, but it’s all in the eShop description: The planet Darius is under attack. Your combat force, the Silver Hawks, is cut off from communication and you have to blast the forces of CHAOS to save the planet. As is traditional in the Darius series, there is a decision tree used to pick stages, with the general rule being “lower on the screen means harder”. There are two sets of 12 stages in regular and “Original” (harder) modes, but you’ll only play three of them during a run. The main modes are hyper-focused on uploading scores, and a “Ghost Score” tracks how many points are lost when you continue, though there is an optional unlimited lives mode if you don’t want to worry about putting yourself under the gun (or are playing offline). A new mode for the EX+ release is an “Event” mode which sets up a specific run and challenges you to get a certain number of points or clear it in a specific time with penalties for dying.

The game’s default controls appealed to my Super Nintendo-loving heart: B and Y were firing buttons for missiles and bullets, and the L button brings out your optional ship that stays on the screen as long as it’s blowing stuff up. The R button controls turning around - since Darius is fundamentally a game focused on multiple screen shooting, shooting left instead of right is going to be necessary at certain points. The multiple-screen view does present a bit of a problem, though: the default view leaves big black bars on the top and bottom of the screen. 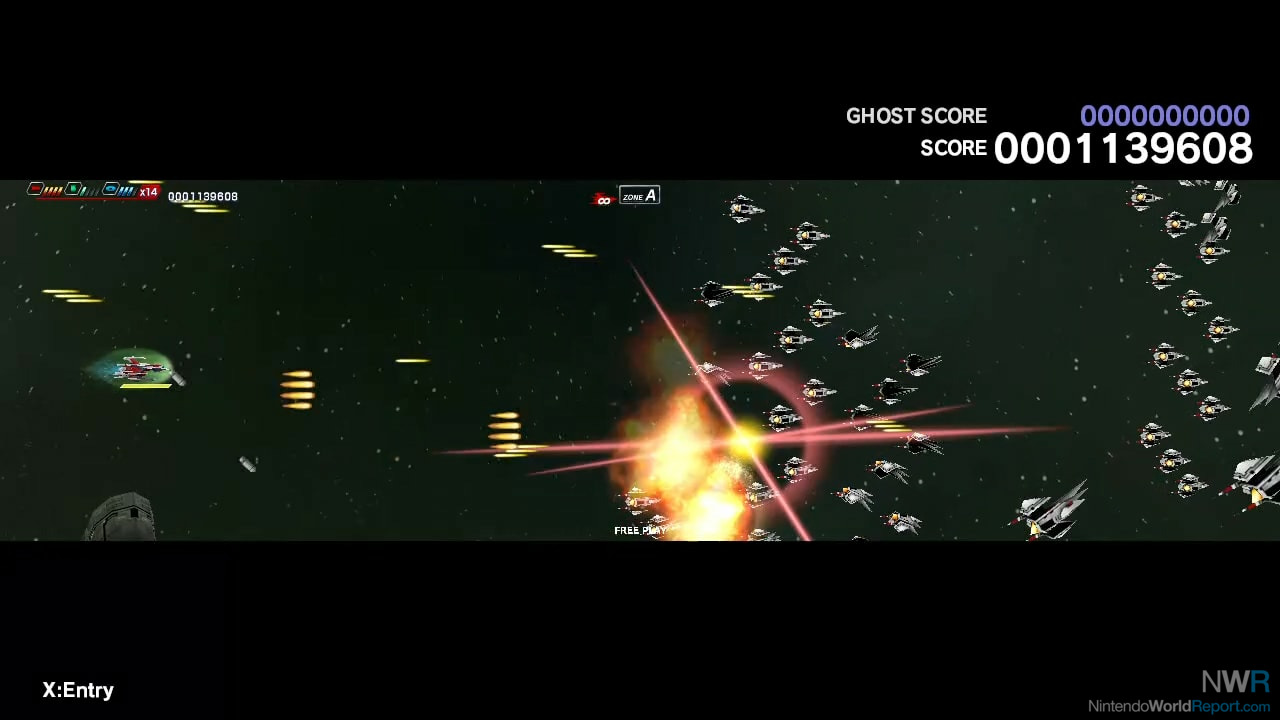 This default view is the best (only?) way to play when using the local-only multiplayer, but if you hit the ZL/ZR button it fills the screen, zooming in tight to the ship. Often, I couldn’t see the boss that was firing at me from the other side of the screen so I had to pull back when hitting it by accident. This definitely cost me a ship or three. Also, X’s main function is as the confirm button for menus for some reason. And this can’t be remapped, unlike the combat controls.

The ships do a good job of popping out from the backgrounds, though I did have a few instances where something I thought was a background element was actually a ship. The lesson here: Just shoot everything. With 24 stages, they do a good job of avoiding background reuse, and there’s also a wide variety of enemy fire types. Also, I did appreciate the “Watch your head” screen that appears in the ending as though it was still an arcade game. None of the game’s music stood out much, but it wasn’t offensively bad either.

I reviewed a compilation of Darius arcade games last year and found that it handled the use of multi-screen gaming better; if Another Chronicle was more in that fashion it would be a bit more comfortable to play. Still, it’s another solid shooter in a system that’s chock-a-block with them.