Hacking and slashing through feudal Japan

Musou games can provide a wonderful reprieve from more methodical and intense experiences. They don't require the patience and timing of Dark Souls, nor do they feature any real puzzle solving or brain-teasing strategy. You're basically just running around and jamming buttons to make hordes of bad guys go flying. Sometimes, you just need a musou to serve as a palette cleanser, and Samurai Warriors 5 definitely fits the bill, with surprisingly decent performance on Switch even portably. Although Japanese history enthusiasts may get more from it, the story isn't overly captivating, but a robust cast, dozens of missions, and lots of upgrades to unlock provide numerous ways to while away mindless hours of action.

Samurai Warriors 5 offers two primary forms of play: Musou Mode and Citadel Mode. The former follows the story of Nobunaga Oda, which plays out over six chapters and about 20 individual missions, some of which are optional. A couple chapters in, a parallel storyline involving Mitsuhide Akechi unlocks that lets you see Nobunaga's quest to unite Japan from another perspective. The narrative is dense with historical details and names from Japan in the late 1500s, which can be a little daunting. Fortunately, the more heavily animated cutscenes are quite nice on the eyes and represent a welcome break from the very repetitive gameplay.

Anyone who has played a "Warriors" game before will know what they're in for: slashing, spearing, and smashing thousands of mostly inconsequential enemies, dozens of slightly more powerful officers, and a handful of challenging bosses. Samurai Warriors 5 does little to divert from that tried and true formula. In addition to its 37-character roster, skill trees and weapons can be developed to empower each of your fighters. New allies join your cause regularly, and completed missions can be replayed with any of them to earn more experience points, gold, and building materials. For each character, you can improve their aptitude with different weapons, strengthen their mount, and even assign new special attacks to the four face buttons. 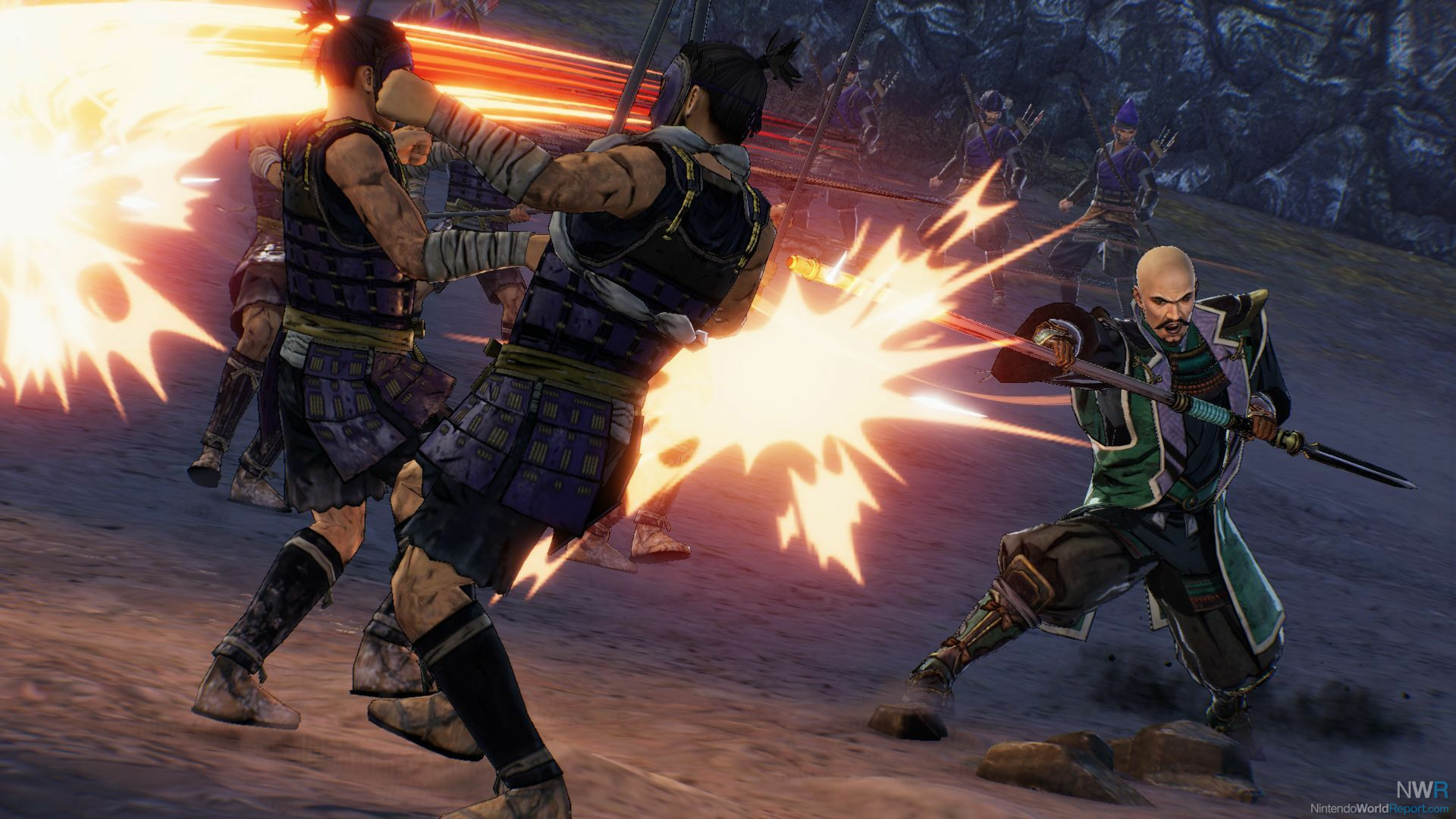 That said, each mission basically plays out the same as the one before it. You'll complete a series of objectives, some of which are optional, until a final boss appears. Said objectives are never much more than eliminating either one or more specific opponents or about 100 regular enemies, sometimes with a super move called a Musou Attack. On Normal difficulty, I never failed a single mission or really even saw my health drop below half, so veterans looking to test their hack-and-slash mettle should probably bump up the difficulty level. While some objectives are timed, these ones usually aren't required for the mission to succeed. When you aren't raining down sword blows on your foes, you're running back and forth across the map to tackle the next objective. Overall, the gameplay variety is very much lacking, but I suppose that's also built into the genre.

The other mode I mentioned earlier offers a bit of a departure from the story-focused Musou mode. In Citadel mode, you take on standalone missions while trying to score as many points as possible. The missions here are much shorter, with only three or so objectives to complete. Their primary function is to supply you with materials that can be spent on upgrading buildings from the main menu, such as the Dojo and Blacksmith where you can develop your characters and strengthen their weapons. The brevity of the missions in Citadel Mode make them great for shorter play sessions. 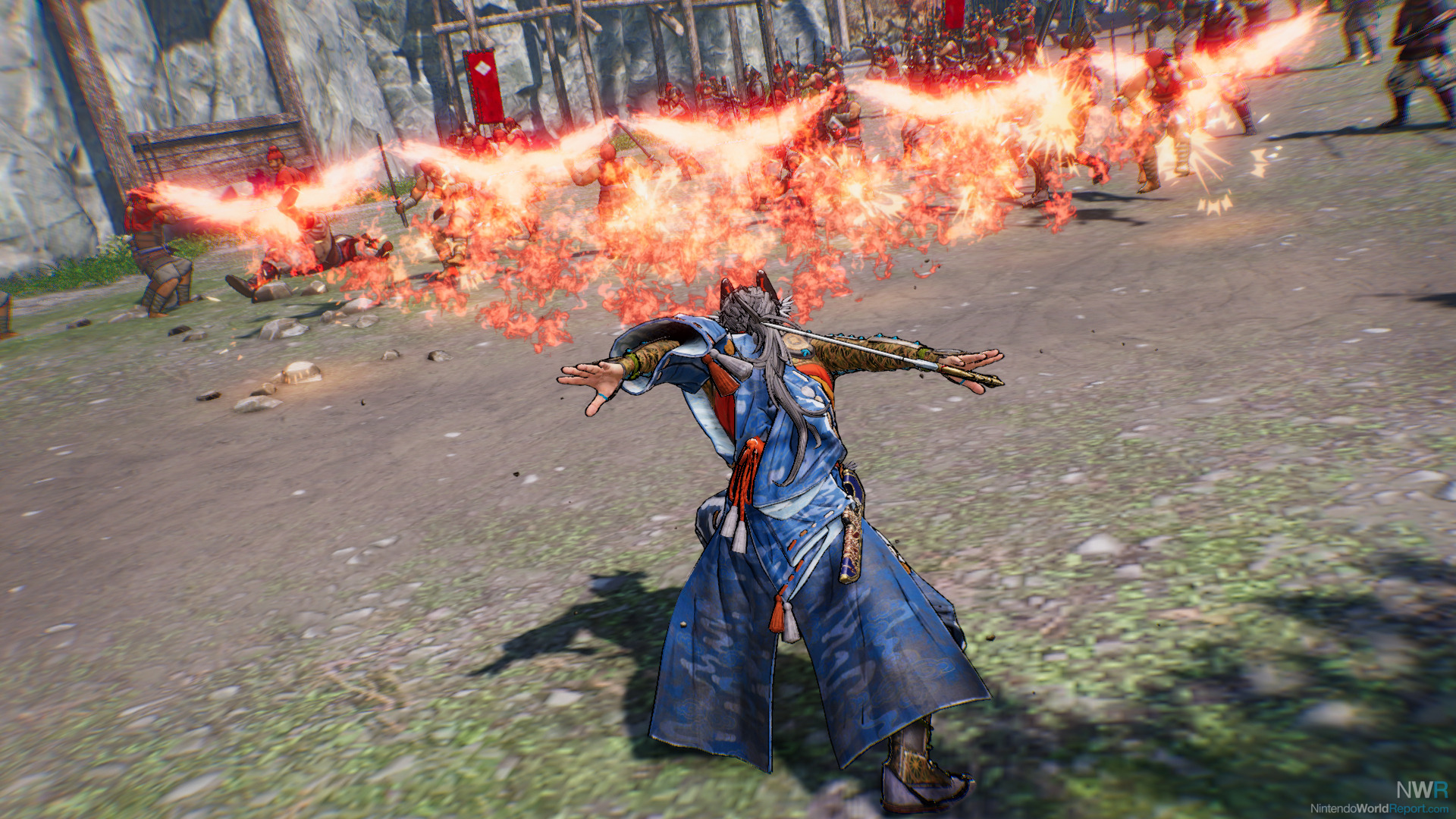 The most impressive technical aspect of Samurai Warriors 5 is that the framerate is mostly stable, even when fighting through the most abundant hordes of enemies. Compared with something like Hyrule Warriors: Age of Calamity, it runs like a dream. Not every facet of its performance is laudable, though. Enemy pop in can be particularly egregious, with groups of foes, even ones that are specific targets for competing objectives, not showing up until you're basically within striking distance of them. Still, the overall experience on Switch, both handheld and docked, is perfectly serviceable.

It's undeniable the amount of content that Samurai Warriors 5 boasts. Completing Nobunaga's campaign unlocks even more missions, and that's in addition to all of Mitsuhide's and assorted side missions not required to reach the end credits. While mission variety and challenge felt lacking, there are reasons to replay stages to complete every objective and shoot for S rankings, which are actually tied to opening up some of the post-game content. Ultimately, there's a type of mindlessness to playing a game like this that serves as both a nice break from more mentally demanding ones and also a reminder that musou games are still quite niche, and perhaps for good reason. If you enjoy breezy, repetitive gameplay with hours and hours of missions to play and stuff to unlock, Samurai Warriors 5 will do just fine. However, I can't see it doing enough to bring new fans into the series.