A colorful co-op shooter that’s heavy on charm but light on substance.

While certainly not an impossibly challenging bullet hell shoot-’em-up, B.ARK manages to bring a vibrant presentation and solid co-op play to a genre that is filled with arcade classics, purist mainstays, and more recently (it would seem) multiplayer party-like experiences. Personally, I love seeing more four-person horizontal and vertical shooters come to Switch, especially ones where the adjustable difficulty and rudimentary gameplay mean my pre-school age son can get in on the fun. There’s a joke in here about its bark being worse than its bite, but at the end of the day, the real question is whether the slim amount of content on offer is worth your time.

A diabolical group known as the Dark Tide have taken over Earth and other planets in the solar system, and it’s up to the members of the Bio-Interstellar Ark (yes, the letter “B” is really pulling its weight in the acronym) to save the galaxy a legion of robotic fish. The four primary animal characters each come with their own ship, unique weapon, and special ability. More than that, you can also find a hidden item in each stage that unlocks a special cutscene to shed light on each animal. Marv, a rabbit, has a homing shot that seeks out nearby targets; Lucio, a bear, fires projectiles that explode on impact, doing extra damage. 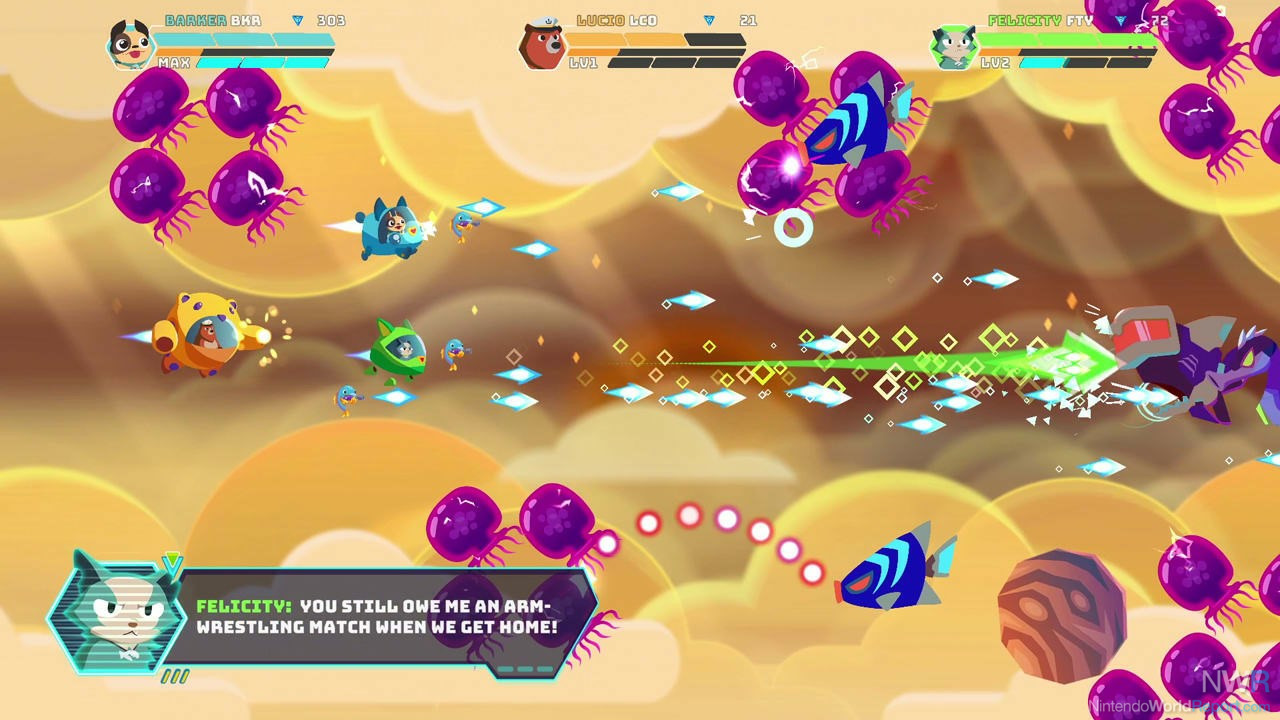 The seven or so stages are themed around the different planets of the Milky Way. The mission on Jupiter sees your team head to the planet’s infamous Great Red Spot, and so you have to contend with storms and lightning strikes in addition to waves of enemies. Every stage has one or more mini-bosses before an end-stage boss, and defeating the minis functions as a checkpoint, which is a welcome feature even if the levels aren’t that long. Many stages also feature an enjoyable mix of horizontal (left to right), vertical, and even reverse (right to left) scrolling. Before starting each planet, you can choose between Normal and Hard difficulty modes, with a third higher option unlocked through gameplay. One noticeable difference is that you start out with less health as the difficulty goes up.

B.ARK’s focus on multiplayer is obvious but welcome. Even before reaching the main start screen, the Switch console prompts you to connect one or more controllers. Each player can create a three-letter profile that really only functions as a way of indicating which person has the high school for the stages on offer. There are no online leaderboards, unfortunately; local co-op is the name of the game. To that end, all of the stages record a high score for single and multiplayer. When playing with a group, you’ll only experience a game over when all of your ships are downed at the same time. If one person loses all their health, they can be scooped up by another player to greatly reduce their death timer, from 30 seconds to about 10. If only one person remains, they can play it safe until their partners get back in the fight. It’s an interesting feature that emphasizes teamwork and opens up the experience to newer or younger players. 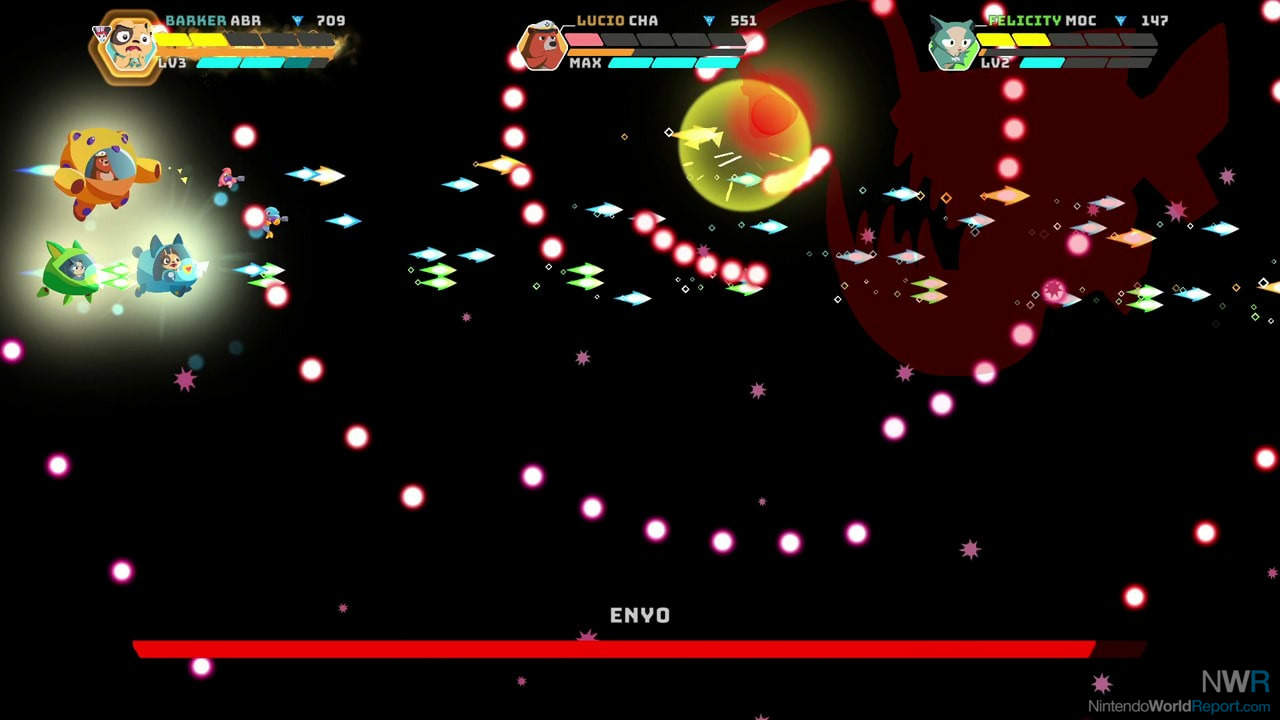 In addition to a special ability that charges up over time, each character’s personalized weapon also powers up through item pick ups. Certain items can boost you to maximum firepower right away; otherwise, you can collect plutonium from defeated enemies to gradually raise the strength of your weapon. As you might expect, taking a hit or two will bring your weapon level down, but the stages are filled with not only health-restoring items but also firepower upgrades.

The presentation and art style of B.ARK really help it stand out from the crowd. The cartoon visuals and hand-animated characters add levity to a genre filled with destruction and gunfire. Bullets stand out well against the vibrant backgrounds of each planet, and the overall look is just really clean and attractive. Again, even though the aesthetic clearly skews towards a younger demographic, there’s definitely room for less serious shoot-’em-up fare on the eShop given the wealth of arcade staples and never-before-localized relics.

As a delightful space shooter that I can enjoy with the family, B.ARK gets two furry thumbs up from me. However, it’s not really for hardcore shmup fans looking for a more challenging and classic experience; much of its charm comes from passing out a few Joy-Con and shooting down giant mechanized starfish. Solid performance and good controls are pluses, even if a playthrough won’t take you all that long. Those who are generally looking for a more laidback, multiplayer focused title won’t be barking up the wrong tree if they give this one a spin.