A gorgeous papercraft RPG with time manipulation at its core.

As much as I enjoy rushing through RPGs to see how the story unfolds, certain titles are meant to be savored like a fine red potion. Cris Tales would definitely fall into that category. With multiple endings, interesting narrative choices, and methodical combat, it stands to reason that players would want to take their time (pun intended) with this whimsical experience. We're calling this a review in progress, so it won't have a final score just yet, but after about 15 hours, I can certainly share some detailed impressions.

Demo progress doesn't carry over, so Cris Tales begins in full tutorial mode. After a few turn-based battles that show off the game's timed attacking and defending, you'll reach a seemingly unbeatable boss fight. At this point, the story backtracks to the town of Nadim where the heroine Crisbell gains her time manipulation powers. Her abilities prove useful inside and outside of combat, but her story involves a journey to discover and awaken her abilities, while also sussing out the plot of an antagonist known as the Empress, who seems to be manipulating certain figures in each town towards nefarious ends.

A number of RPG mainstays are present here. Shops, inns, townsfolk, and side quests are all part of the experience, but the lattermost of that group is worth focusing on. Helping people with their requests can have real consequences for their homes and lives, with the game providing a brief glimpse into the future you create by completing the tasks given to you. In this way, each city stands alone to an extent with its own main story objectives and an assortment of smaller goals to work towards, if you're so inclined. 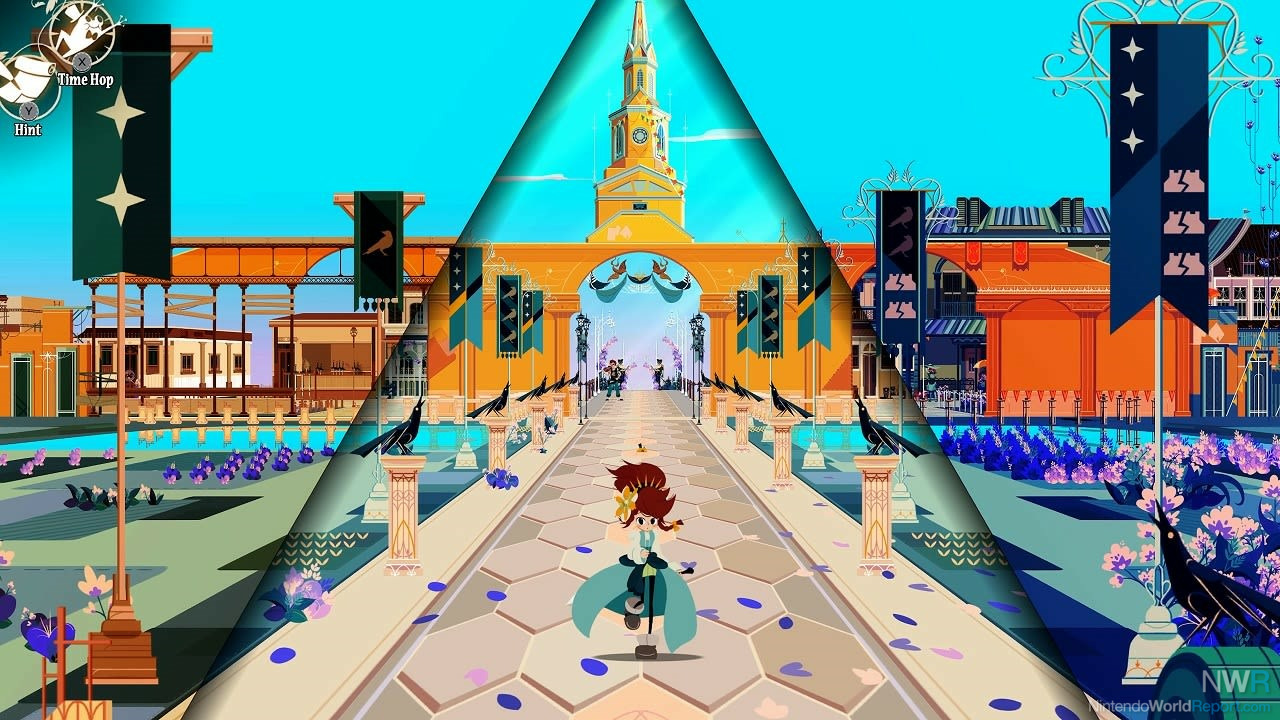 At nearly all times when walking through a town, the screen will be divided into three segments, with a triangle shaped slice in the middle representing the present, a sliver on the right the future, and the same on the left for the past. It's a unique and fascinating presentation that really drives home the theme of time and change that runs through the story. In addition to treasure chests and quest objects, conversations and points of interest within the past and future can be accessed by hopping back or forward in time with your frog guide, Matias. So far, the exploration and investigation of the towns, coupled with the ability to see immediately the changes brought about by your actions and choices is a clear standout of Cris Tales.

One noticeable weakness, on the other hand, is frequent loading screens. Moving to a new area or new room leads to a white loading screen of 8 to 10 seconds, but worse is the loading times that bookend the random battles found in dungeons. Combat itself isn't overly fast-paced, and this combined with the loading screens makes exploring the dungeons thoroughly a bit of a chore. 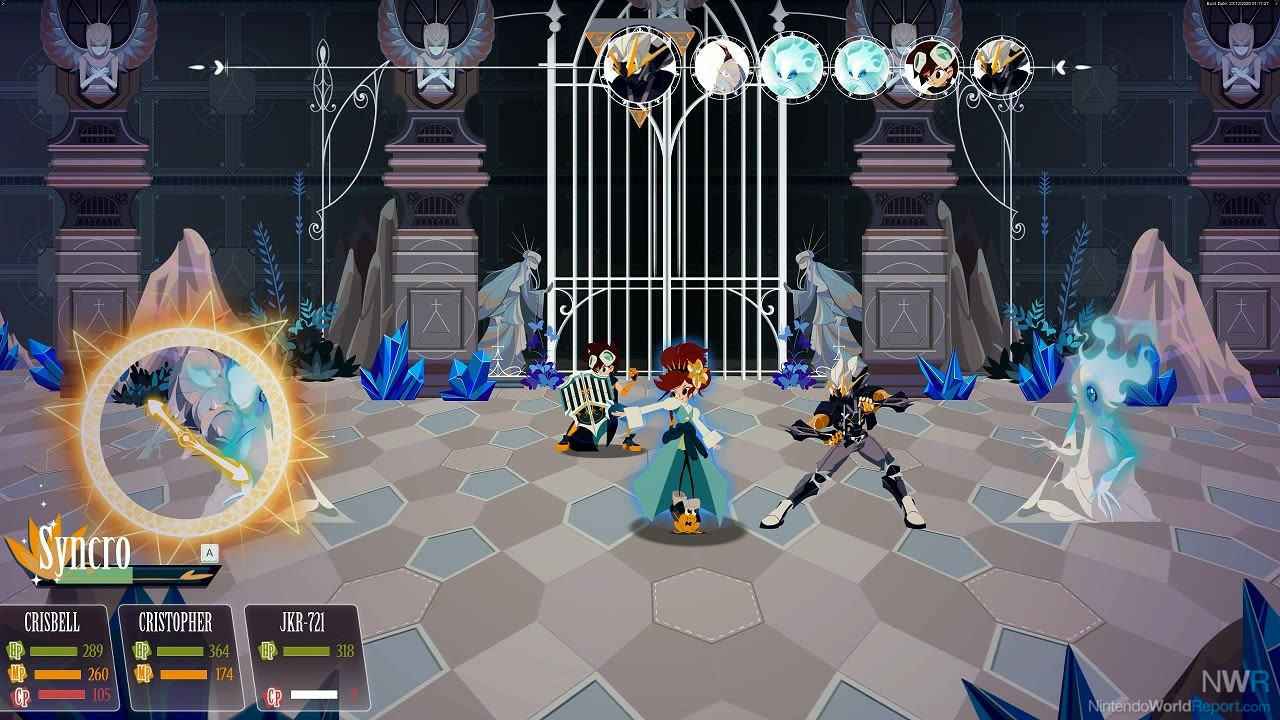 The battles themselves are enjoyable and emphasize timed button presses to increase damage doled out or reduce damage incoming. Much like in Super Mario RPG and Paper Mario before it, Cris Tales can really reward or punish players for failing to connect on these button inputs. Fortunately, the timing is fairly generous; however, the lack of tactile feedback when successfully making an effective strike or block is noticeably absent. Since new abilities are learned regularly, it's quite important not to skip too many random encounters, and because some of the bosses can put a serious hurt on your three-person party, you want to be leveled up and equipped with good gear as well.

One final note on the battle system is the importance of Crisbell's time manipulation powers. While fights take place on the present timeline, enemies can be thrust into the past or future to varying effects. An enemy situated in the past might take more damage, while activating a future slice of time against an enemy can cause them to grow old and perish. Paired with your teammates' abilities, status effects like poison can have all of the damage they would do over four turns occur on a single turn. You're rewarded for experimenting, but brute force can usually get the job done, too. 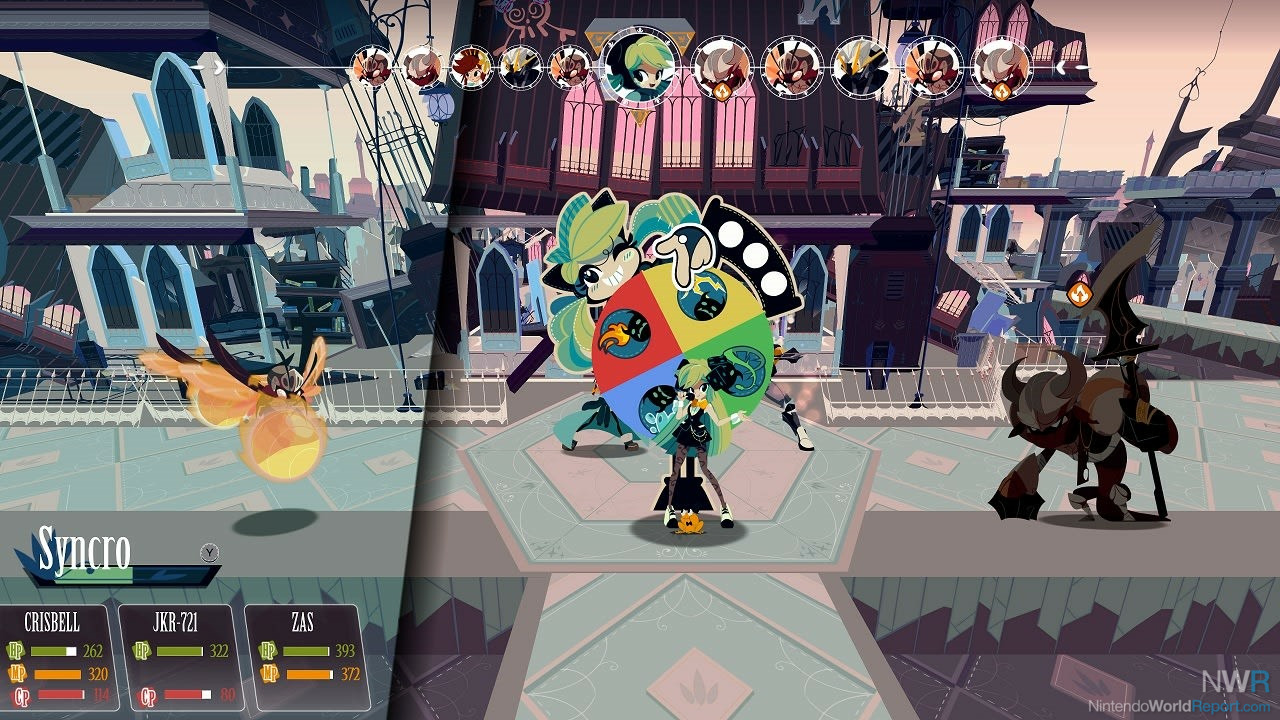 Aesthetically, Cris Tales is genuinely sublime. The music features piano-heavy traveling themes and an upbeat and catchy battle track, but the visuals are on another level. The papercraft art style gives every background a pop-up book style to it, reminiscent of Bravely Default and the Paper Mario series. Even though none of the animations are all that flashy, strolling through the different areas of each town and seeing the three timelines at once is truly special.

I still have a lot more to see and do in Cris Tales, but the strengths heavily outweigh the weaknesses so far. There's no getting around the frustrating load times, but these are primarily disruptive during dungeons. The lack of an autosave function is a curious omission, forcing you to save frequently lest you fall in battle and have to replay a particular segment. Fortunately, you can save anywhere on the overworld map and save spots in towns and dungeons are numerous. I'm excited to see how it all comes together, so please look forward to the full review posting soon, I suppose in a future slice of time.