In a world where automotive based games are dominated by either the sim or arcade racer experience, there is a little space in between where the odd ones out find their niche. The most popular examples are the Mario Kart series and Rocket League, which choose the experience and fun of competition and gameplay over the nuances of the vehicles themselves. There are others out there that look to buck the typical automotive-based video game trends such as physics and mechanic sims, which turn to aspects of vehicular manipulation to help us pass the time. In the vein of the multiplayer experience, we have Crash Drive 3 from M2H, which looks to steal some of that party game lightning that kart racers seem to have bottled.

Where Mario Kart and Rocket League give you a set of controlled and closed off course environments, Crash Drive 3 places you in an open area with a set of ramps, natural jumps and obstacles with which to perform various tricks and feats. This open setup feels very Gymkana- like in flow and layout. There are five different world environments to play in; however, all except the first have to be unlocked during play. There is no story or true end objective, and you have two modes, offline and online. In each mode, you are given a set of timed challenges roughly every 30 seconds. Once an event begins, you will have an arrow over your vehicle that points you to the objective. The events include a checkpoint race, object tag, coin collecting, cops and robbers, and high score stunt driving, to name a few. Some events such as cops and robbers are only available in online play. In offline mode, there is no AI to compete against; it’s just you and the environment playing the available challenges that pop up. 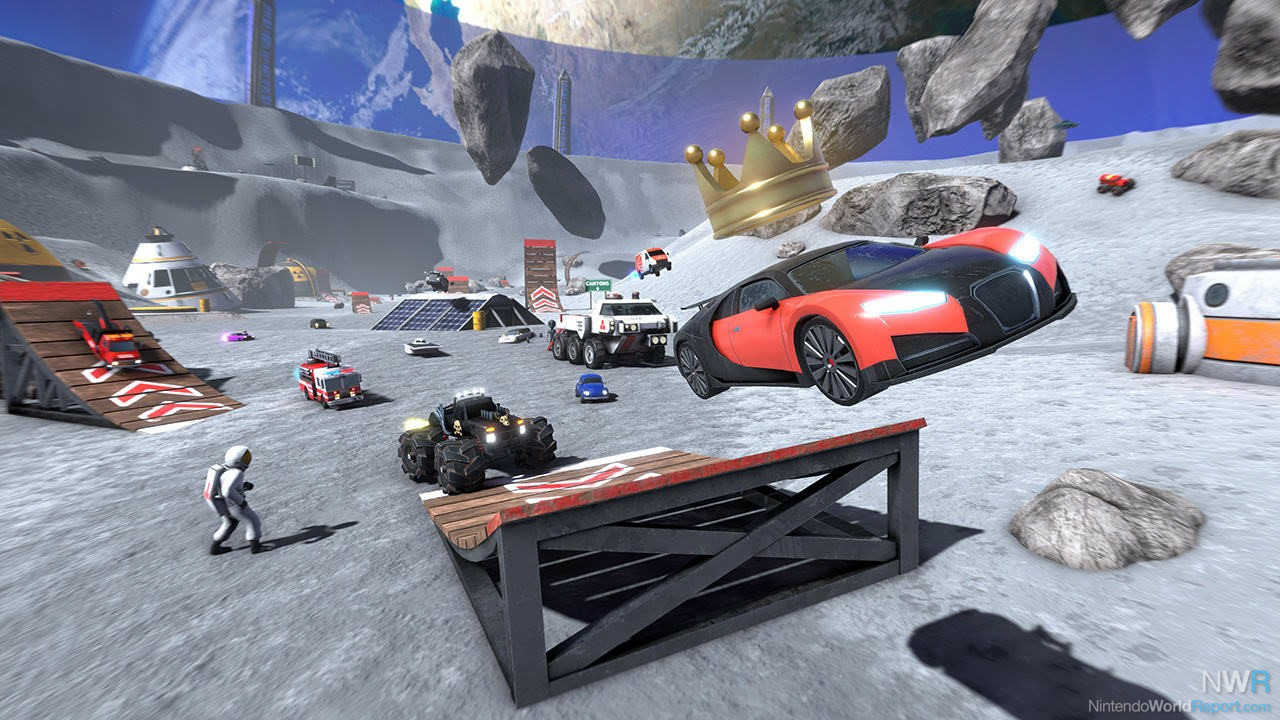 During offline play, the game feels a little sparse in spite of ramps being everywhere. I was less interested in the random events than I was trying to find the green rings located around various jumps that you need to hit to unlock the next environment. This seems to be the only way to move to another “world.” Once you hit all the required rings, you have to find the exit to the realm you’re in, which is usually indicated by signs. Once you find the exit, you drive through a tunnel and need to pay a toll fee to open the lock. Money is earned through doing tricks and winning events. Money can also buy you different vehicles which can be upgraded in the garage. That said, Crash Drive 3 offers little sense of in-game accomplishment beyond moving to the next environment and buying different looking vehicles. I'd like to see some sort of daily/weekly/regional leaderboard, custom titles over the cars or even more customization of the vehicles themselves.

Online mode is where this game is meant to shine. In a given instance, you are in the arena with around 10 other online players and when an event begins, it is a mad dash to complete the mission. The online only event, King, places a crown over someone's vehicle and every one has to chase that player to steal the crown. Whoever holds the crown the longest wins. Cops and Robbers is another online only event. In this game, half of the online players are cops who have to catch the robbers, the other half are robbers who have to collect gold bars. When the cops tag the robbers, they become cops and must chase down the rest of the robbers. The multiplayer madness is fast paced, grin inducing, and the meat of the game. 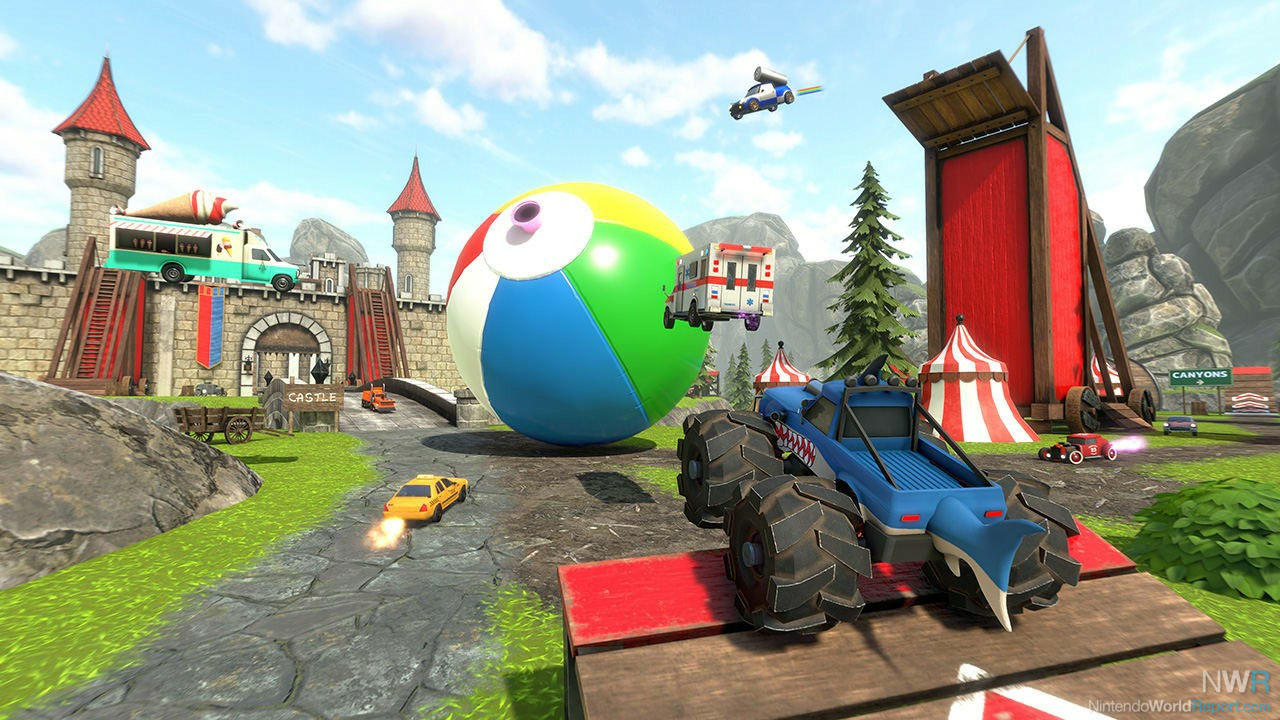 There are 47 different vehicles to unlock with in-game cash. There are also differences in the vehicle types according to weight class; light, medium, and heavy. Each vehicle has a feeling of heft to its controls, but the loosey goosey physics do little to inspire predictability of a vehicle's momentum at all times; it does fit the tone of the game, though. The weight does change how well you can perform certain tricks or how much damage you do in something like the Beach Ball challenge, so some vehicles are better for certain events than others. Thus far, it seems that mostly cosmetic changes can be made with little performance tweaks to be had, which is fine for a game like this.

The controls in Crash Drive 3 are your basic litany of gas, break and nitrous. There is an e-brake to perform tight u-turns and to assist in a drift. The right stick moves the in-game camera POV, and you will need to adjust this frequently as u-turns rarely realign the camera for you in a timely manner, which can result in missed jumps or collectibles. Jumps can be difficult to line up due to the combination of controls and environment. The starter area, the arctic, forces players to manage the handicap of ice, snow and a partially frozen lake. I like the idea of being able to go under the ice into the water but due to the ice's fixed nature, you cannot simply "Kool-Aid man" your way out. You have to find a break in the ice with enough ramp or clear path to exit. The dev team thought of this as well as there are signs underwater that lead you to exit points of the lake. Someone must have realized that it was a bit difficult to get your bearings, going underwater just slows down the pace of the game unnecessarily and serves as a point of frustration as it can cause you to lose an event if you fall in. 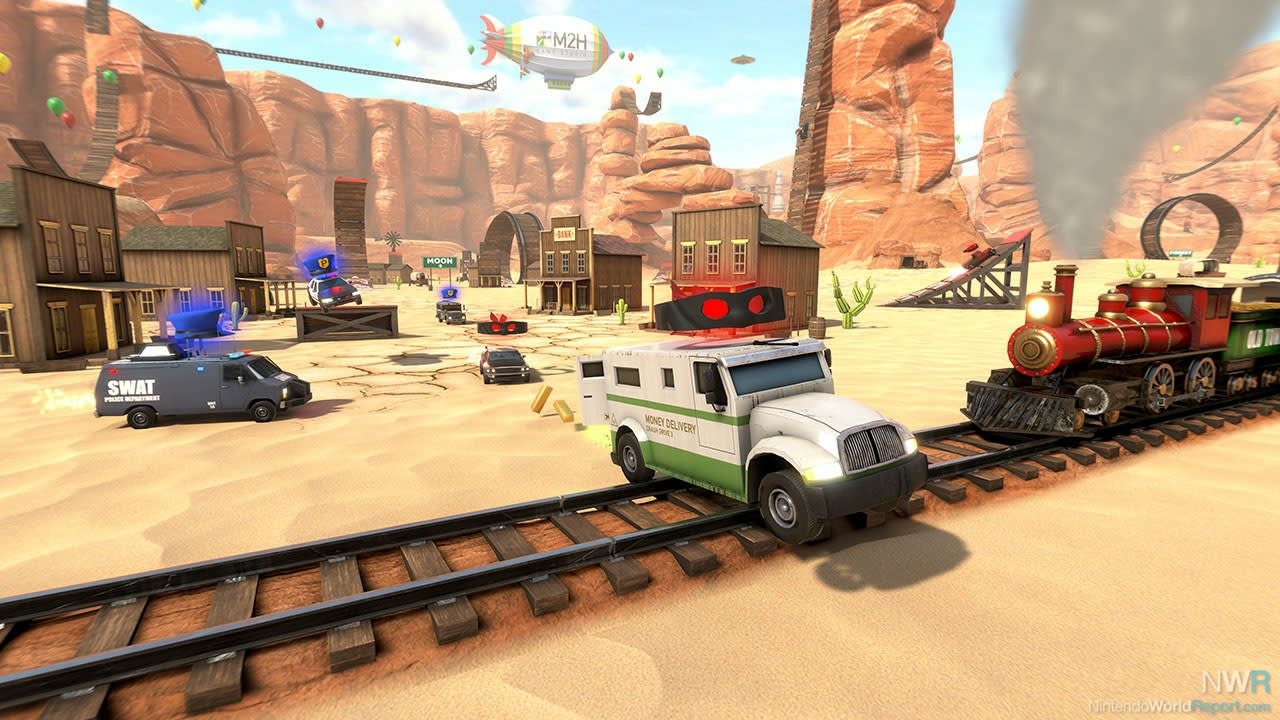 Without a doubt, I can appreciate another party game entry for the speed demon in all of us. In single player mode, it is sparse; it needs multiplayer to be fun, and online mode delivers the goods. On the other side, with games like Mario Kart and Rocket League you can find yourself with some AI opposition to make things interesting when riding solo. While online play is the focus of Crash Drive 3, the offline mode could stand to be more engaging. All in all, Crash Drive 3 continues its tradition of open-area multiplayer madness by offering more vehicles and more game types than its previous entries. A more in-depth single player mode with AI competition would be a very welcome addition, though.