Hooked on a feeling

Ever since reviewing Ghostrunner last year I’ve been on the lookout for more unique first-person platformers. What games like Mirror’s Edge and Ghostrunner do so well is putting you fully in control of your own actions, where every jump, dash and wallrun make you feel like an actual Spider-Man. Cyber Hook seems to follow in their footsteps, with a first-person platformer that gives you a hookshot-like device that enables you to quickly attach and detach yourself from platforms. What seems like a deceptively simple concept feels so incredibly tight woven with freeform arcadey gameplay that Cyber Hook surprised me on every step along the way. 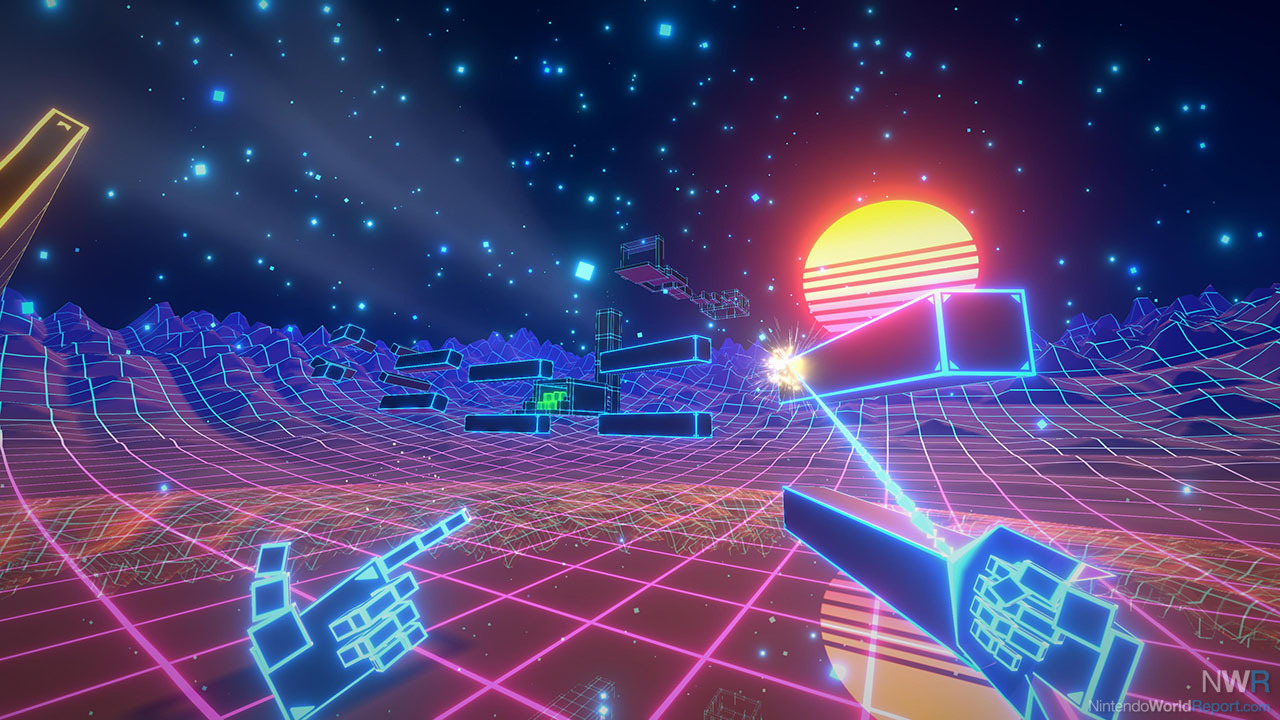 The plot in Cyber Hook feels reminiscent of titles like Superhot. You control a character from the first-person perspective while guiding yourself through a series of detached levels in order to escape a cyberspace-like environment. Along the way you encounter a robotic companion that warns you to definitely keep on the move to avoid ‘them’. While the story setup is few and far between, it provides a good background for exploring the vaporwave-y levels and designs in Cyber Hook.

At its core, the hook of Cyber Hook, is well... its hook. At all times you carry a hookshot like device on your right arm, which enables you to attach to specific colored platforms. The hookshot has a very specific range, but what makes it interesting compared to other hookshots is that you have to manually detach yourself from the attached point. This enables you to precisely decide how much force and height you need in order to launch yourself across gaps. Each level is a series of disconnected blocks that form a parkour to travel as fast as possible to a gate at the end. The game rates you on a three-star scale for your time, so it’s up to you to decide your route through the level. This is truly where the game ascends from a simple platformer to a free form exploration game. The hookshot is so versatile that it enables you to attach to all sorts of platforms that at glance are only used to running across. I found that oftentimes I’d just jump into the void, shoot the hook up to the platform and swing my way across levels to pick up speed. It’s this free form nature of the game that made me replay levels again and again to find the best route. 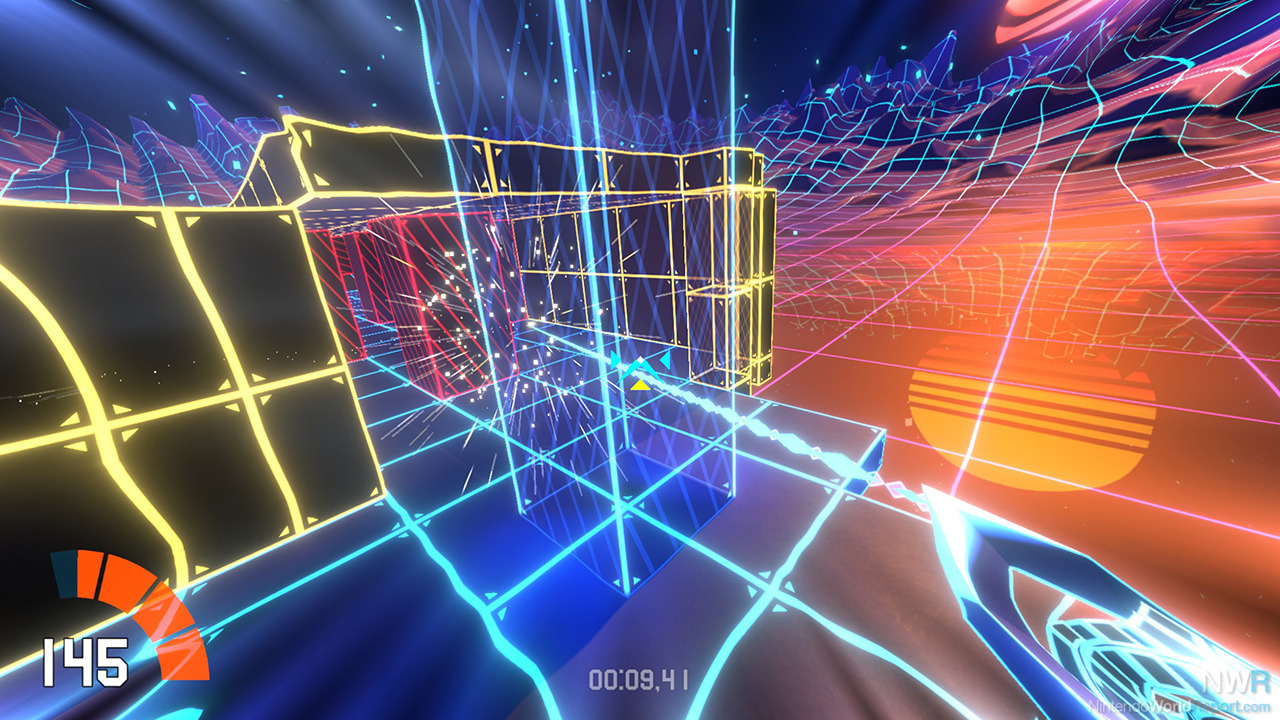 Thankfully, Cyber Hook uses more gameplay mechanics to spice up its levels. After the opening stages you gain access to different abilities. One of them is a way to fire at green colored blocks in order to break them and open up different passages. The other one allows you to slow down time to more precisely aim your hook at different ledges and platforms. Its the combination of all these elements in later levels that make you feel like a speedrunner by simply playing the game. Dashing from a starting position, shooting at a few green blocks to open up a platform that can be hit with the hook, swinging yourself across a large gap and using a double jump into a wall run never starts to feel old. It feels so satisfying to ignore a laid out path of blocks to find your own way to the exit in a way that the designers definitely had in mind, seeing the time required for a three-star rating, but that feels like only you could have discovered. 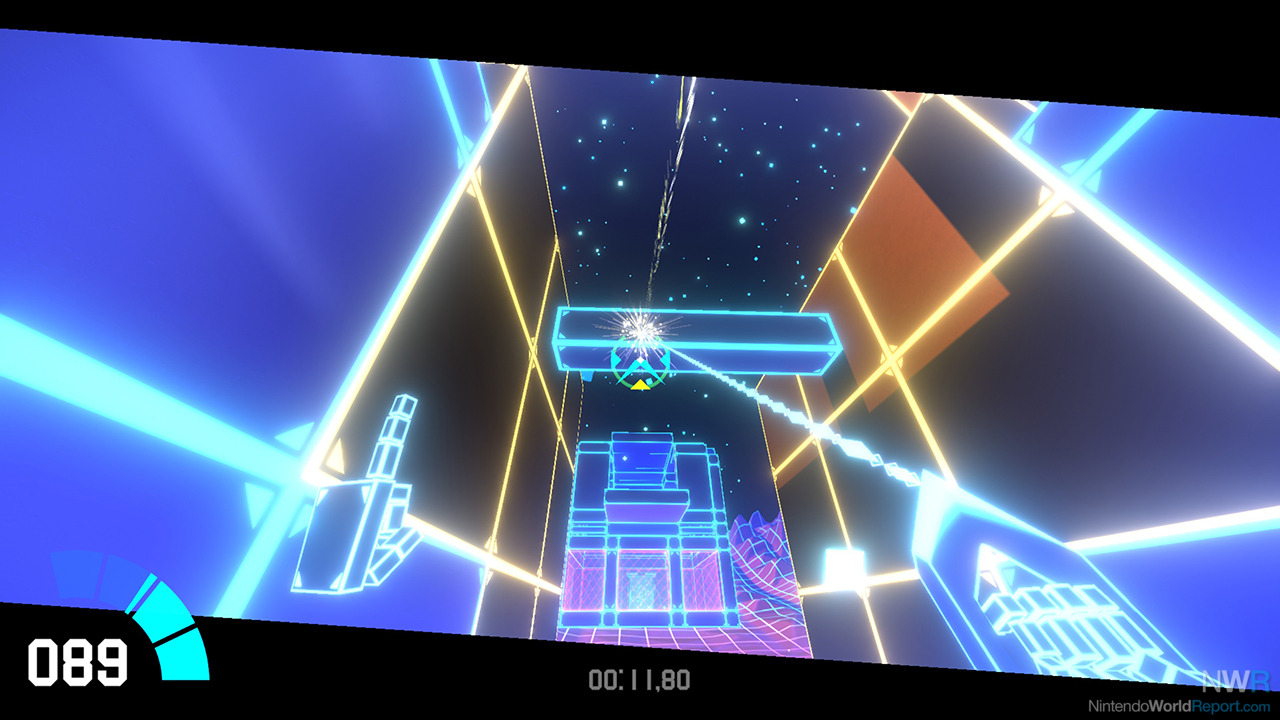 One of my biggest gripes with Ghostrunner last year was it's compromise in the graphical aspect. A game that definitely ran smooth enough, but had to cut corners to get it to work properly on the Switch back then. Cyber Hook doesn’t have this problem thanks to its minimalistic art-design. Levels consist of a beautiful VHS / Vaporwave-like background and all the simple colored blocks. The properties of the blocks are communicated through their color and design. Shaded blocks aren’t solid, but can be shot by the hook. Purple blocks will reset you if you swing into them, Red blocks are also a instant game over and cannot be shot and Yellow blocks cannot be shot at all. These mechanics are never explained to you, but you will catch on quickly when trying to make your way to the exits. Running is also a key mechanic here and always looks awesome. You build up speed very quickly, causing for a lot of motion blur that still looks fantastic on the Switch in both handheld and docked mode. Even HD-rumble is optimally supported and if you fail a stage the rumble is finetuned so that it plays a little tune. Resetting a stage or level is almost instantaneous and feels just as fluid and smooth as the gameplay on its own. It’s obvious that the developers took a lot of time and effort to make Cyber Hook optimized on the Nintendo Switch. I have played a lot of smaller independent games on the Nintendo Switch, but it’s so rare to see a game this well optimized on the platform. 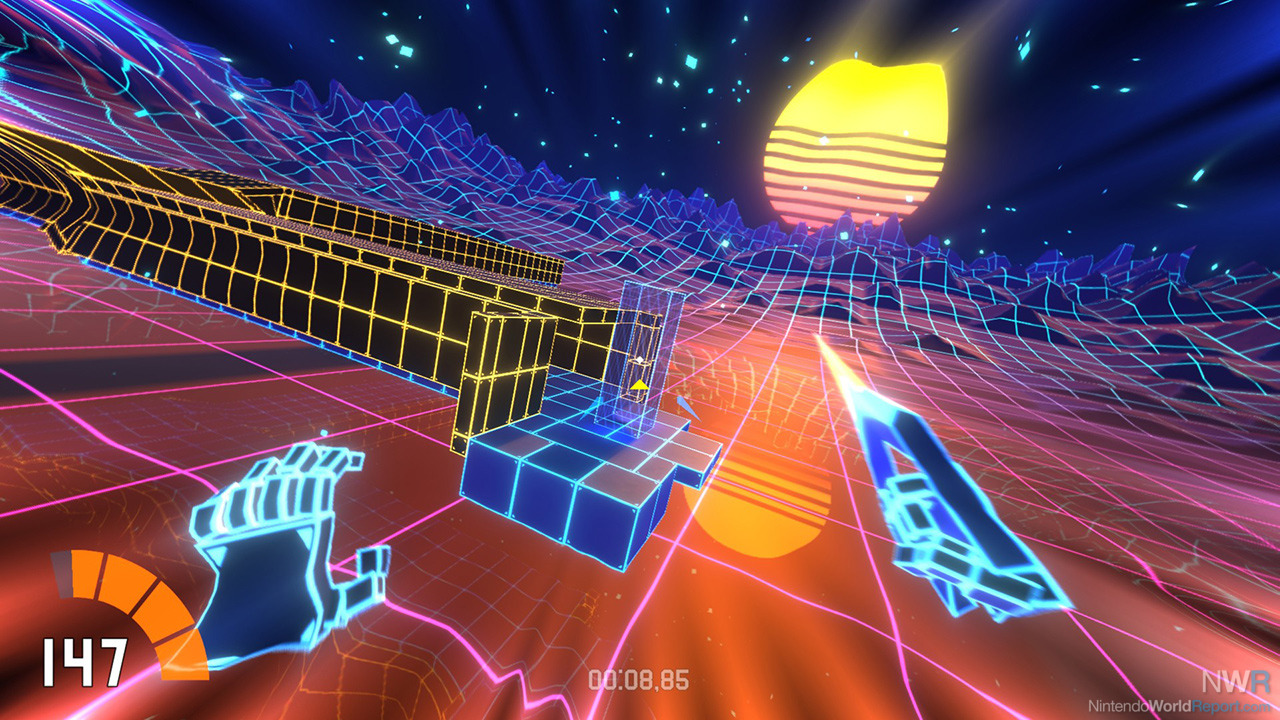 The integrated online leaderboards for each level is also great. You can both see how well you’ve placed on the leaderboard after completing each stage for both the worldwide rankings and the rankings in your own country. Watch out fellow Dutchies, I’m in the top percentage of players for nearly 1/5th of all the levels. It’s all these little additions that made me want to return again and again to the world of Cyber Hook and perfect my scores and find new routes throughout the levels.

I simply cannot overstate how much I had a blast while playing Cyber Hook. Its short levels are perfect for pick up and play moments at any time during the day. The performance is absolutely optimized for the Nintendo Switch and makes the game a joy to play from beginning to end. Its free form but open level-design makes exploration fun and gives me such a satisfying feeling after completing each level to sometimes retry them again and again to optimize my route and get that three-star rating. If you want a game that is easy to learn, emphasizes arcade-like replayability and just feels great to play on Switch, Cyber Hook should definitely be on your radar. I can’t say anything else except that I’m completely hooked on this one.