Where are Bibarel and Tropius when you need them?

After the runaway sales success of Pokemon Sword and Shield, two years is about the right amount of time for the monster handling titles to start pouring in on the Switch. Capcom took a crack at the genre in 2017 with Monster Hunter Stories for 3DS, which seemed like a fun effort but wasn’t going to be a breakout hit as a post-Switch 3DS game. Now that it’s on a system of record, and Monster Hunter has broken out into the mainstream outside Japan, Monster Hunter Stories 2 is a fuller realization of what was originally intended for this spinoff series.

The second Stories contains a lot of references to the first, but as someone who was burned out on Monster Hunter in 2017, I still found the plot easy to follow. After creating a character, they appear on the tropical Hakolo Island and quickly become a “Rider:” a person who protects their home from out of control monsters by taming them. Early on, all of the Rathalos have disappeared, including one who is the guardian of Hakolo Island, but your rider receives a Rathalos egg and then has to hatch and tame a Rathalos while not simultaneously causing it to go feral and destroy the known world. The created character does scream during combat, but they’re otherwise silent, which requires the returning Palico Navirou to speak for you—and I’m not sure if it’s his voice or the lines, but I found myself skipping through his all-too-frequent dialogue.

Any Monster Hunter worth its salt has quality combat, and Stories 2 does a fine job of adapting to turn-based combat. There is both a weapon triangle based on attack types—speed beats power, technical beats speed, power beats technical—and monsters also take additional or reduced damage depending on the type of weapon the hunter uses (bladed, blunt, or piercing). Riders can also attack, and if the “Kinship” gauge is high enough, they can request their monster do a special move: otherwise the monster and any of the rotating party members known as “Battle Buddies” act independently. Successfully using the weapon triangle increases the kinship a bit, and if two party members have triangle advantage on the same enemy they perform a double-team move that skips an enemy action and does big damage. There is a “lives” system measured by hearts; as in Monster Hunter proper, if you or the monster combine to lose three hearts, you return to the last village visited. The Battle Buddy and any monsters they have share a separate count. During the story and optionally online, you can have a fight against another Rider where the first to take three hearts wins the match.

Two nice quality of life features are the ability to kill a fight on the spot if you’re guaranteed to win it (also awarding maximum points that determine item drops), and since you can have a party of five monsters, those that are lower leveled get an experience bump up to a 500% boost. The party is built by finding eggs in the environment and them returning to a town’s “Stables” to have them hatched: the dens that contain the eggs have random maps and appearances, but you can use items and equipment that force monsters to “retreat” and create a quick den with a forced egg at the end. Duplicate monsters can be released, though it may be better to hold onto them early on because of the ability to use the “Rite of Channeling” to pass on abilities to the ones you’re using. Each monster has nine slots to use, and the abilities have their own icon and color, so aligning three of the same icon or color creates a “bingo” that increases the effectiveness of an element or attack type. Some monsters even come with “wild card” abilities that can be any color or icon.

If you need a lot of side quests, Stories 2 delivers in spades. At about the 30-hour mark, I had TEN pages of quests between completed and accepted ones at ten per page. The sidequests are a combination of fetch quests and monster fights both small and big—note that the ones marked “Hard” aren’t kidding and I had to be about ten hours ahead of when the quest opened before I beat the first one. Additional challenge quests can be taken on, and there’s multiplayer both local and online, which held up well, though I question if it’s going to see much use. My only complaint is that navigating the world requires a very fixed party: there are six different environments in the world that require monster abilities to navigate. If I want to clear out maps on the first try, I need monsters that can jump, swim (through either water or lava), climb ivy, break rocks, and dig through holes; no monster has more than one of these abilities that I’ve been able to find. You theoretically have six party slots, but one slot is fixed for your pet Ratha who’s either useless or flatout gone from the party for plot reasons for a large portion of the story. Pokemon Diamond and Pearl might have required two HM mules to navigate the world, but at least I could use four combat Pokemon in my party otherwise. I would love to use the stealthy Nargacuga or the poisonous Pukei-Pukei, but they don’t have navigation abilities so they had to sit on the bench. 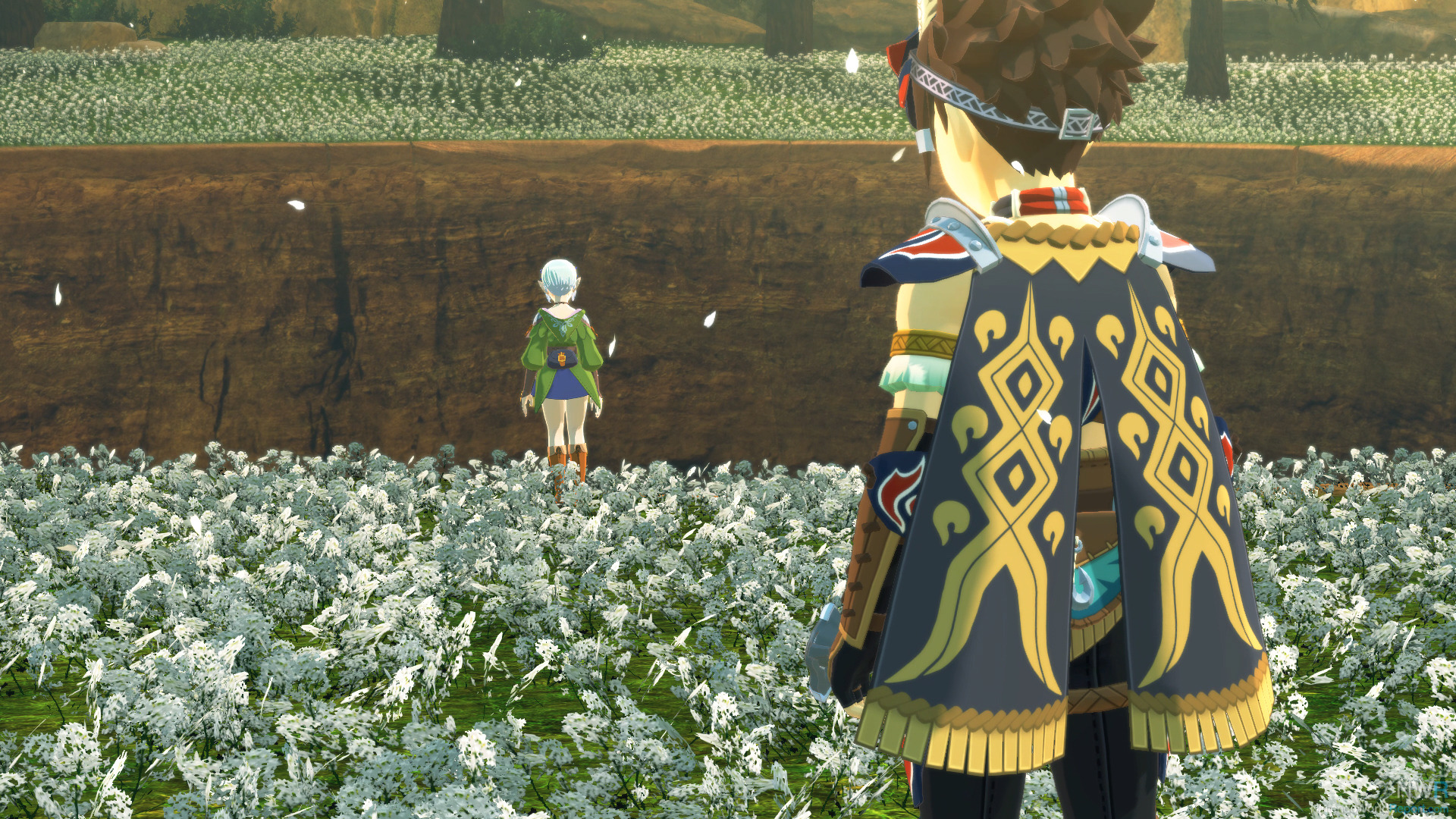 If I tried to eat a donut hole this big, I'd probably die.

Clearing the portion of the game covered by the demo took about four and a half hours, though I didn’t go for 100% demo completion. Getting to credits in Stories 2 is roughly 7-8 times that, and there’s some postgame story and a full content roadmap through October, so there’ll be reasons to duck back in. If you’re going for 100% completion of sidequests or having every monster from the in-game compendium, it’s not out of the question that the clock could run up to 150 hours. Short for a Monster Hunter game’s 100% completion, but long for a turn-based RPG.

If there are any technical fixes in the day one patch for Stories 2, I couldn’t tell: the patch was not distributed during the review period: I did see a few frames of white screen both in the early game and afterwards, and couldn’t quite place why they were appearing. I’m not sure if the frame rate is capped; it seems to be aiming for 30 but there were a few times where it slowed down even when in docked mode. The transitions to battle also take about 7-9 seconds between contact with the monster and the menu coming up for commands using a second-rev Switch docked. On the aesthetic side, the environments are basic and do the job, while the monsters are clearly delineated and stylized differently from the main games but still look good. The music is mostly unmemorable and the voice acting good outside of Navirou; I do like the use of British accents for the “wyverian” or elf characters to reflect them being different.

I don’t think I’ll ever get 100% completion in a Monster Hunter game, though it certainly won’t be for lack of trying in Rise. That said, Stories 2 might end up being the game I get the closest to a “perfect game” in. There’s plenty to play with here, and honestly I’d like to double back and check out the original to fill in some of the gaps in the story. This JRPG July is off to a pretty good start.

A review code for the Deluxe version was provided by Capcom, though some of the content was not live as of the time of the review.

Ah, they Paimon-ed their silent protagonist.

I should check out the demo first, but it's good to read that the game is good.