A soap opera is still a soap opera, even if the cast are mutants.

Mutazione bills itself as a soap opera on a tropical island inhabited by mutants, and I struggle to compose a more concise summary for Die Gute Fabrik’s narrative adventure. Mutazione is about wandering around an island and interacting with the members of a small, insular community: their loves, their challenges, their flaws, and their history are better fodder for exploration than the island they live on. It just happens that most of them are mutants, but that’s largely incidental to who they are. Players interested in a bit of soap in their character-focused adventure titles should read on, those looking for gameplay focus can move on to other titles. 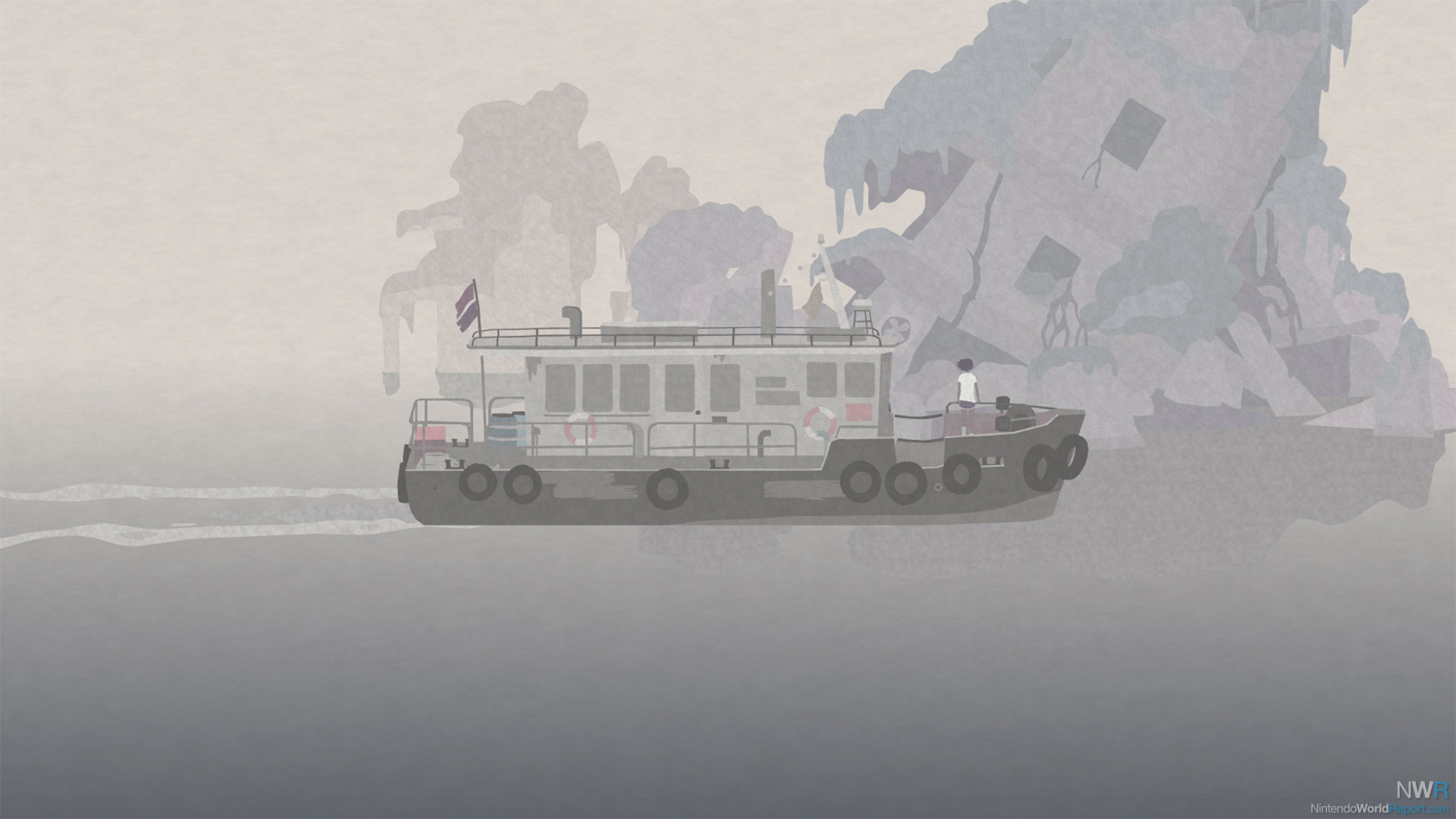 The ruins of the old world..

Kai, a high school girl from the city, has found her summer break plans ruined. Her grandfather, whom she has never met, is dying and her mother has sent her to visit him at his island home. At best, she’s heard her mother tell stories about her estranged father who she had left on the island where she grew up. A meteor strike had left the island dramatically mutated. Its plants, animals, and people all took new forms. While Kai’s grandfather had originally gone to study them, he instead found himself drawn into their spiritualist lifestyle, becoming their shaman.

Pretty much the entirety of Mutazione is Kai wandering around the island, talking to its colorful cast of characters. There are a number of standouts. Miu, a humanoid-feline has a taste for screaming rock music and a deeply pained backstory. Bopek, a pre-teen amphibian-like humanoid, struggles with being the only adolescent on the island. To cope, he has turned to his hobbies of fishing, weaving, and over-consuming hot sauce. Tung is a golem who loves to watch Italian soap operas, not that he understands the language, despite struggling with the fact he’s living one. 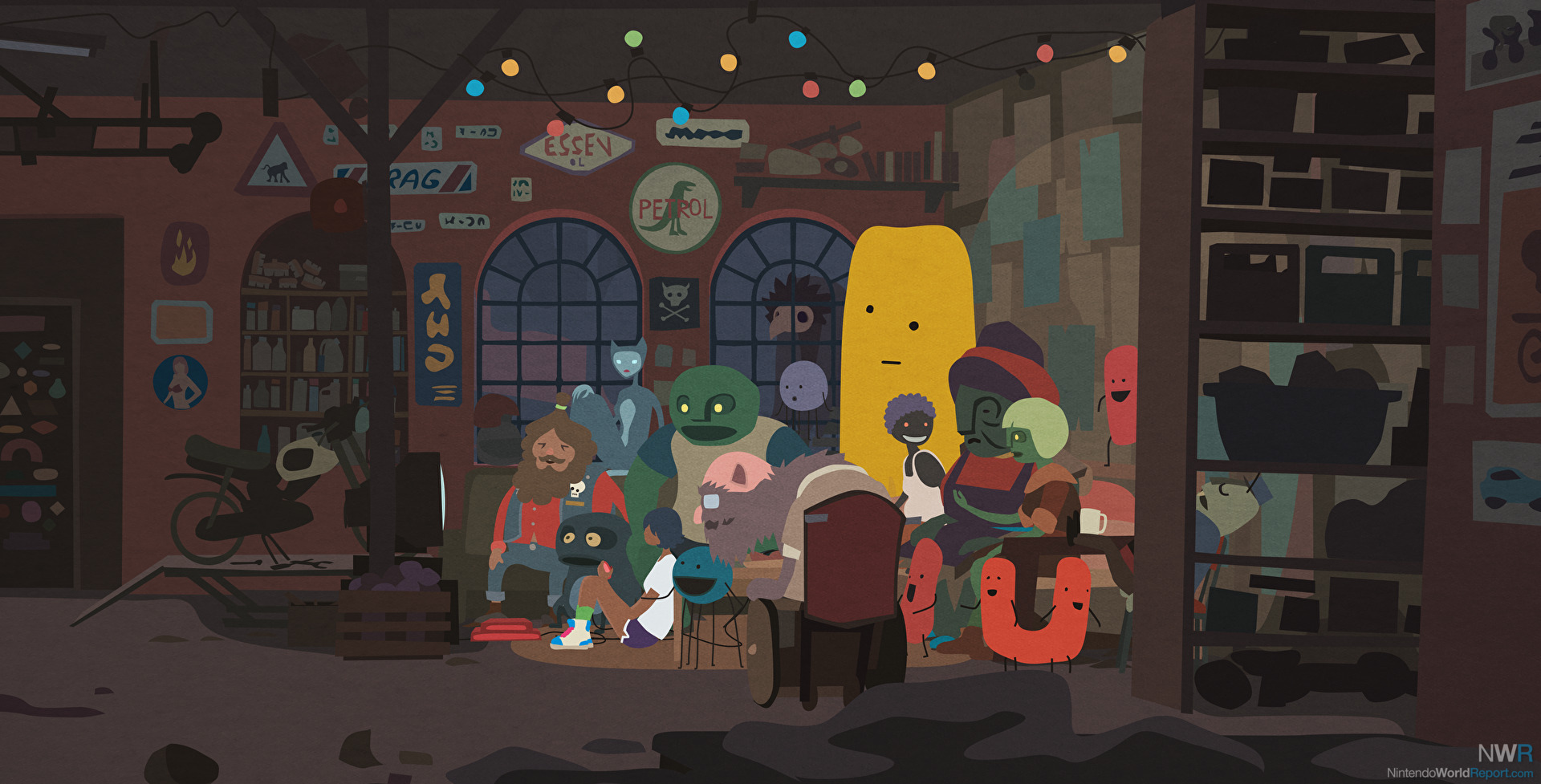 The population of the island.

Each character on the island has personality and history. Often Kai has to work through their personal concerns in order to get to the bottom of problems they’re facing. Unwittingly, Kai’s grandfather has been passing his shaman duties onto her, and getting to know the people of the island, be they mutant or not, is how she helps them.

This is where Mutazione shines. There isn’t a single character who I don’t at least like, and all of them have some kind of arc. The writing is snappy, and the cast plays well off each other. The Sausages, a pack of “market disrupting” sentient sausages, have the keen eye for business of an Amico investor, and the nonsensical schemes of an NFT seller. I adore their many high-falutin schemes, even if their actual job is literal shit shoveling.

Sadly, whenever you’re not interacting with the cast the experience is less enjoyable. The world is set up as a series of screens linked by exits. Oftentimes you have to wander the island trying to track down an islander who has gone off somewhere. The game also expects you to explore to get the most out of the story, and to collect seeds for a mostly forgettable gardening mechanic. The problem is Kai isn’t very fast, and it takes a while to get from here to there, an especially damning issue when you don’t yet know where “there” is. If there were more things to do along the way, this would be fine, but there largely isn't. I mentioned gardening, it had been a responsibility of Kai’s grandfather, and while the game puts a lot of story emphasis on it I found I did each garden once and then never touched them again. 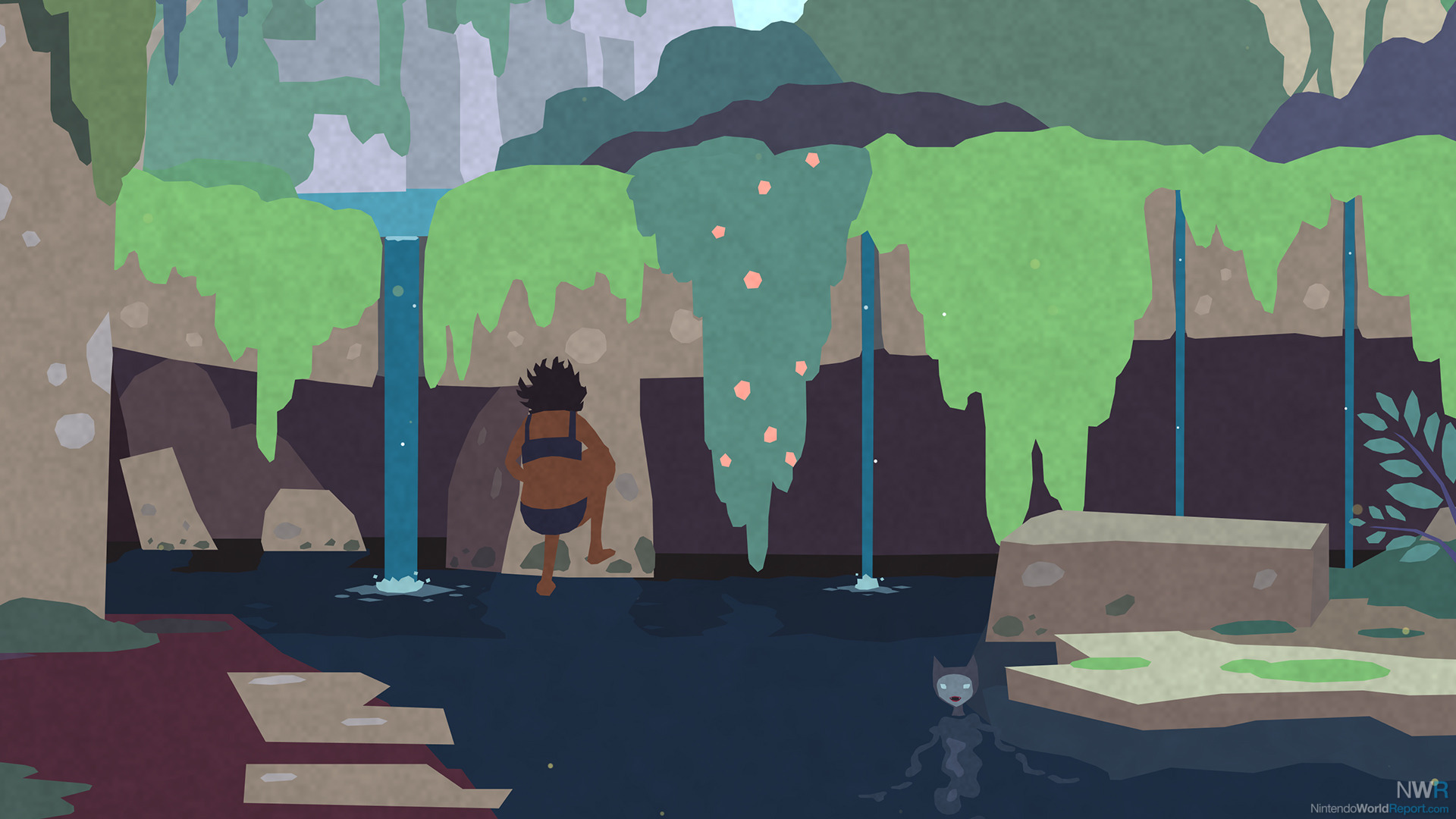 The art style of Mutazione does shine, relying on a mostly-flat shaded cartoon style that foregoes dark outlines around most shapes. The style really pops on some of the mutated cast, in particular Tung, whom I would absolutely put up a poster of.

I enjoyed my time with Mutazione. It’s fairly short, less than ten hours. But, sometimes navigating made it feel longer than it needed to be. The cast is small, but rich with character and history. Their interactions are great, and getting to know them alongside Kai is a treat. That said, there’s not much mechanically to recommend. If you like narrative-style adventures, like Night in the Woods and its ilk, then this is an easy recommendation. If you like strong characters then this should be a priority to play. However, if you need a little more gameplay in your games then this might not be for you.

I hadnt really heard about thjs before, but it seems like the sort of thing I would like. I will have to keep an eye on it.

Great review, sounds very interesting. I enjoyed Night in the Woods, but didn't feel compelled to return to it or look up similar games like it so I don't think this is something for me. But it is great to hear that there is solid character writing happening.