Rise of the Slime (Switch) Review

Another deck-builder roguelike but this one stars a slime

Roguelike deck builders are having a bit of time in the sun. From the success of Slay the Spire came more entries into the genre like Steamworld Quest, Griftlands, and Monster Train. Now Rise of the Slime by Bunkovsky Games is throwing its hat into the ring.

Rise of the Slime’s first impression is that it’s pretty freaking cute. The main character is what appears to be a King Slime, but is mostly a perfectly round boy. They’re wearing a little hat and bounce all over the place with a squishy little face. They are very endearing, and the overall art style is equally so. A large portion of the characters are depicted as paper cut-outs attached to sticks. The whole vibe has a feeling of a stage play since the sticks are definitely attached to an analog of stage hands. Whenever a character uses a shield item, two arms with shields around them spring up from the area the stick rises out from, adding a touch of humor. 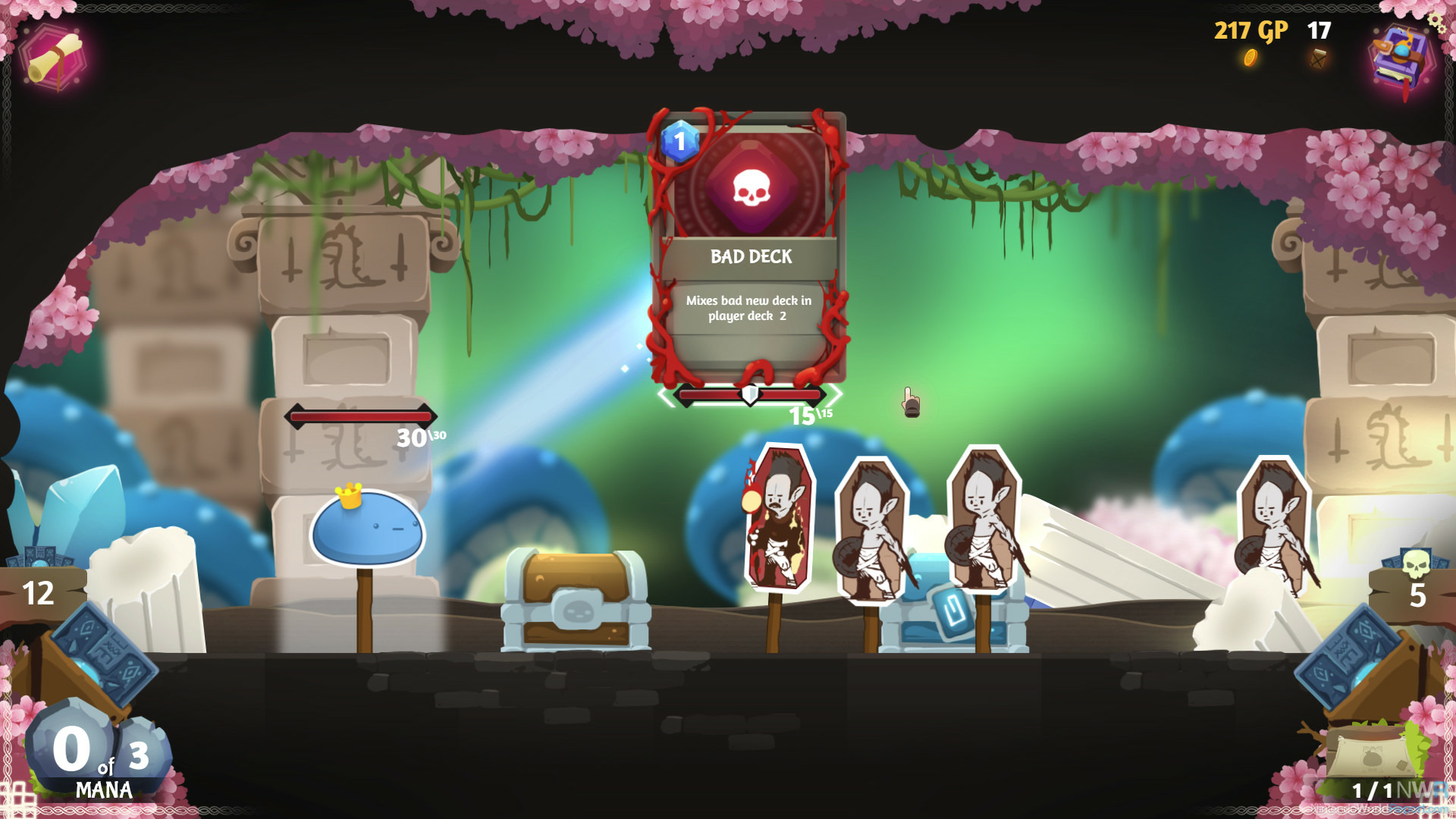 The story behind the gameplay is kind of an afterthought, which isn’t uncommon for the genre. Story details are basically nonexistent, but from what is shared the plot follows the titular slime embarking on a quest to conquer the slime kingdom. What is an afterthought in Rise of the Slime that I didn’t really expect is the soundtrack. I honestly kept forgetting there is one. The volume it plays at is really low to the point where I had to turn my headphones way up to even hear it at all. Even when you do notice the music, it isn’t anything to write home about.

The gameplay in Rise of the Slime is pretty standard for a deck-building Roguelike. At the start of a turn, random cards will be placed into a hand. These cards have different effects like shielding, melee physical attacks, ranged attacks, summoning pets, or casting magic spells. The magic effects can either damage enemies or alter terrain, and usually the magic cards will also include one of two status effects: burn or poison. These status effects will deal damage over time and can stack for larger amounts of damage over longer periods of time. There is a mana system which means that you can only play so many cards in a single turn; each card has a mana cost in the upper left. The costs range from zero to five. The stronger the card, the higher the mana cost. 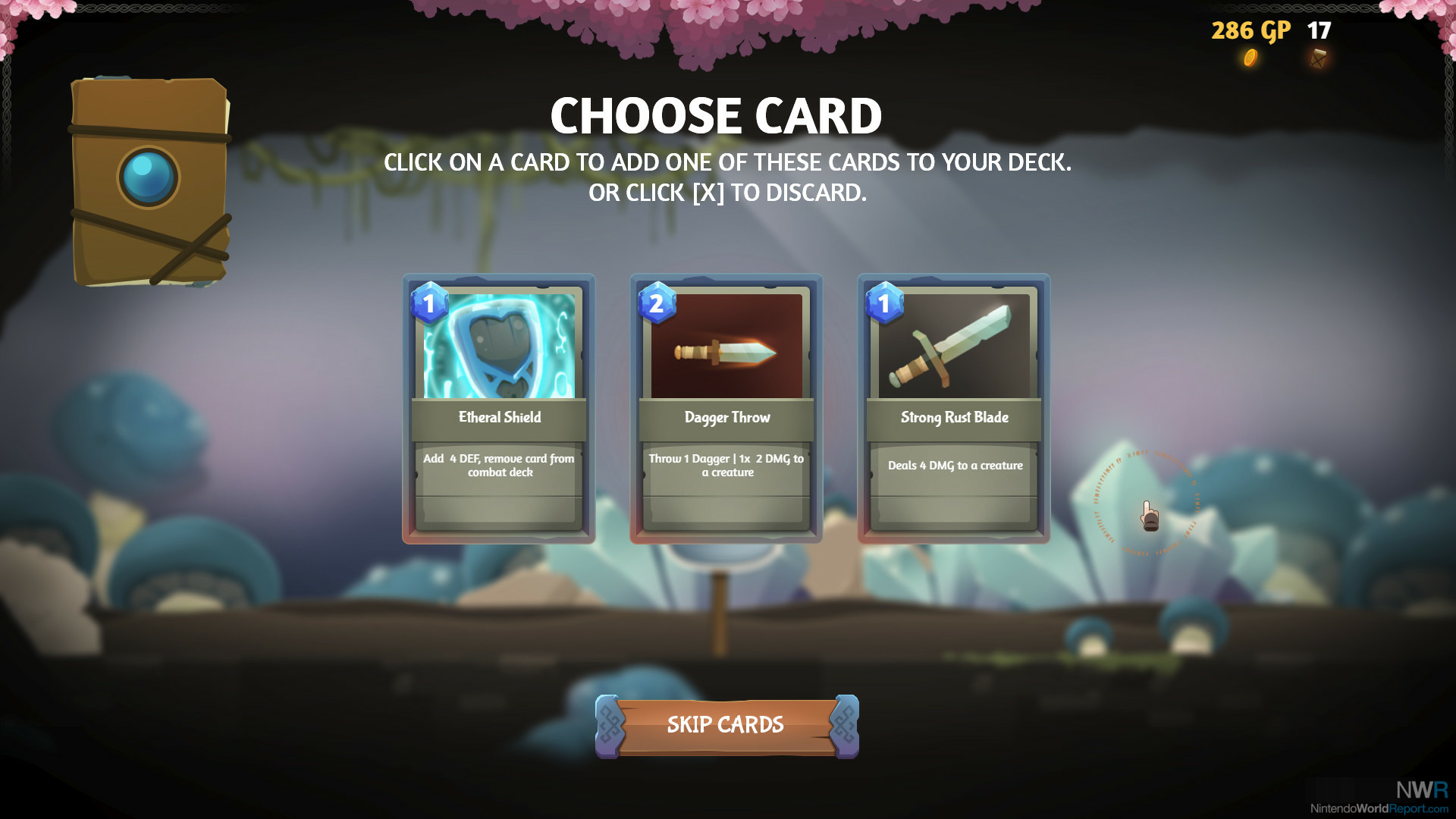 What deck you start out with is somewhat random. The player is given a choice at the beginning of a run to pick a flavor of deck. There is the standard deck featuring normal attack and defense cards, a fire focused deck, a poison focused deck, and then a deck made of entirely random cards. Earning new cards is done in a few ways. They can either be bought in the shop or are earned after winning battles. For each enemy defeated in battle, the player also earns one new card chosen from a random group of three.

Rise of the Slime has additional random elements via its mutation system, which is how it makes each run unique. Picking up a mutation will grant the slime a new intrinsic effect such as earning coins faster or granting a bonus for being on fire. These are similar to the Boon system in Hades. Mutations are very powerful and will make some runs much easier. However, they don’t dramatically change how the game plays.

The mutation system not changing the gameplay enough underpins my biggest complaint with Rise of the Slime. It just doesn’t have a large enough variety in the amount of verbs. It’s really easy to fall into the same strategies because the number of options is low. I will admit that there are strategies revolving around stacking poison and burn effects on yourself, but to really pull those off, you have to take on a negative first. I’ve never been a fan of trade-off power ups where to get to a good aspect, you have to deal with a bad one. So, for me, the options in building a deck weren’t very enticing: focus on strength building, or upgrade the summonable pets. Creativity in the deck-building aspect isn’t exactly where I want it. 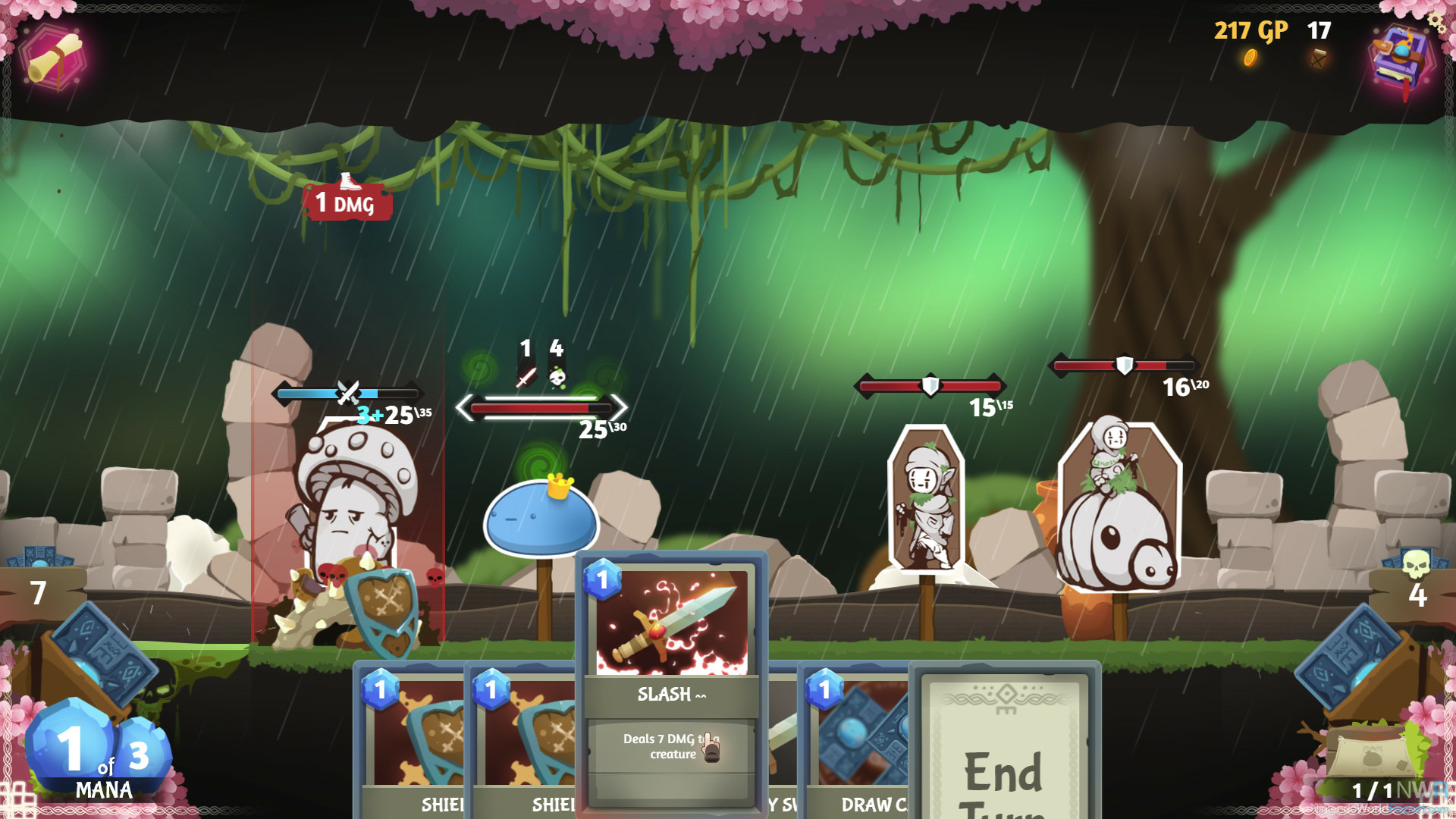 That isn’t to say there aren’t unique aspects to playing Rise of the Slime. The combat section has an aspect of tactics games to it since you can position the player character. Each arena is a long corridor that has tiles where the slime or enemies can be. Kiting enemies or igniting specific tiles are legitimate strategies thanks to the movement system, which is also used in a really clever manner in certain rooms that are all movement puzzles. One room had blocks falling from the ceiling and the entire point of that room was to make it to the other side without being hit by the falling blocks. I really like this use of the mechanics a lot. It broke up the monotony of trudging through endless combat rooms or character improvement areas.

Rise of the Slime isn’t a bad game or a great one. It’s fine. Ultimately, nothing here feels special. Switching gameplay modes from deck-building combat to the pseudo-platforming sections really feels close to being groundbreaking, and I would love to see that explored more in a future game from Bunkovsky Games. Taken for what it is, Rise of the Slime is just okay.