If It Ain’t Broke Don’t Fix It

Disgaea is a long running RPG series dating back to 2003 and since then it’s been slowly iterating on a set of gameplay rules that has served it well over the last 18 years. These rules follow tactical grid-based combat with a cartoonish art style and tongue-in-cheek humor. At this point, Disgaea is a known quantity. It does what it does very well with a slow and steady drip of new mechanics that adjust the gameplay without making any giant leaps forward. Disgaea 6: Defiance of Destiny does exactly that but cranks up some of the absurdity for a fun and exciting new addition.

At its core, Disgaea 6 is one part tactical JRPG and one part visual novel. The story is laid out in chapters with multiple levels per chapter/world. Each level begins with a minute or so of conversation amongst the characters before launching into a combat encounter. This is the first warning for those curious about the franchise. While skippable, the amount of storytelling presented is fairly consistent. This means jumping into the action is always a bit stifled with brief back and forth banter. It throws the pacing off and might be considered a hindrance to the impatient.

That being said, the story of Zed the zombie is charming. It’s easy to fall in love with his steadfast attempt to defeat the God of Destruction to save his sister. Zed with his faithful dog and straight man Cerberus stand as a solid comedic duo. Zed continues to attack and be defeated by the God of Destruction. After every defeat he is “Super Reincarnated” in a different world with new characters and combat maps. The fact that he’s constantly killed is definitely played up for laughs. As the story progresses, a gang of merry followers joins Zed and Cerberus (sometimes against their will.) One by one, we are introduced to new quirky characters that dig deeper into the backstory like a weird anime Wizard of Oz. The comedic dialogue is really well written this time around. Characters constantly chime in on the foolishness of it all while breaking the fourth wall. Phrases like “what kind of lazy developer would allow such a thing” or “if I kill you and you reincarnate, I can just keep leveling up!” are commonplace. In addition, characters will often physically hit each other in cutscenes for faux “Game Over” screens or for 999,999 damage in pixelated RPG font. It’s the attention to detail that really sticks out and adds to Disgaea’s charm. 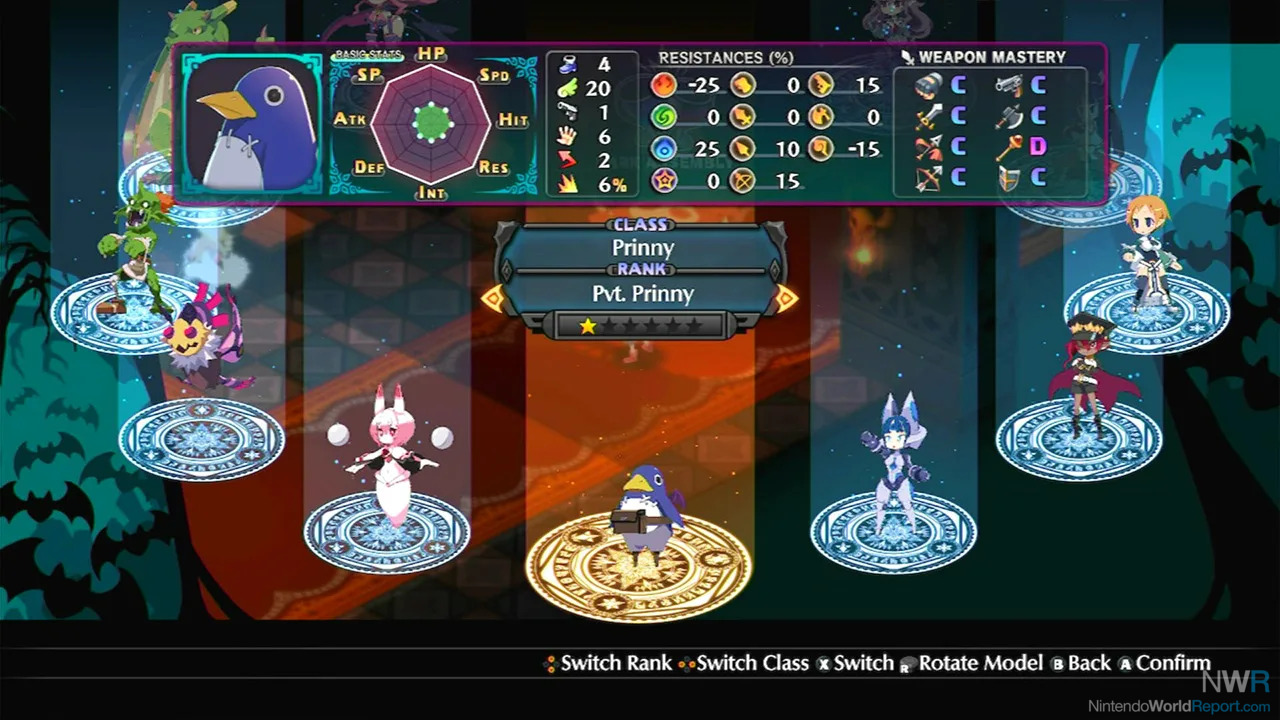 Concerning the tactical RPG mechanics between the set pieces, they’re pretty straight forward. Units are spawned from a central point and moved individually across the grid to attack. Each unit's attack range is based on its special abilities, class, and weapon type, so there’s a lot to experiment with. Higher proficiency with said weapons and classes will gain them even more bombastic special attacks and increased damage. I’m not joking when I say that damage numbers go into the quadrillions. You can’t help but laugh at the outrageousness.

Another returning Disgaea combat system is the “Geo Symbol” system where colored tiles on the map can be used to help or hinder you throughout combat. There will occasionally be designated spaces on the map where a colored pyramid can be placed, and this will give large sections of the map traits such as “DEF+10” or “50% damage.” If the Geo Symbol is placed on one such spot, it will affect the corresponding color grids, but they in turn can be moved or even destroyed. Destroying them will cause damage to anyone in the same colored spaces. It’s an extra wrinkle to account for, but when you get into the groove it feels good. Other times, though, it can slow down combat to a snail's pace when attempting to avoid them. 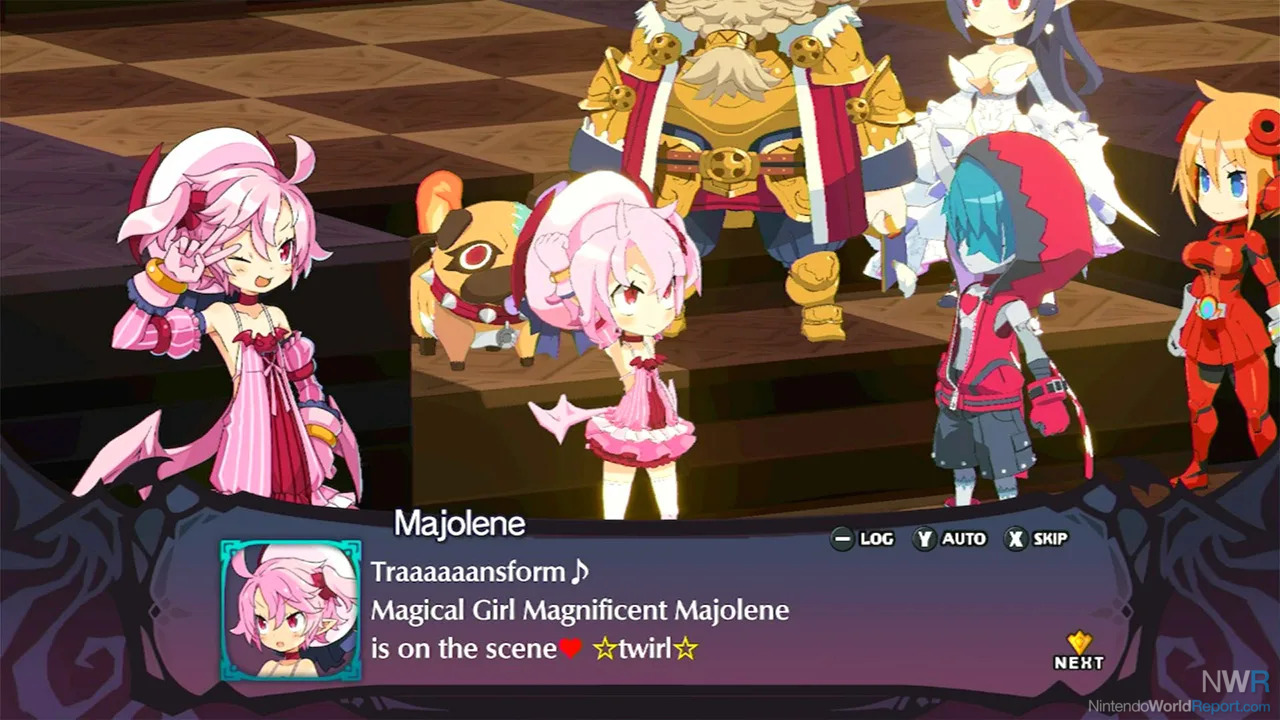 Those are the basics of combat, but with grinding your classes, weapon proficiency, and stats, you’ll still need to replay some encounters. That’s where the game introduces some of the newer features: Demonic Intelligence (DI), Auto Combat, and Auto Replay. Demonic Intelligence allows you to essentially program your team so you can have them automatically fight battles for you with Auto Combat. The DI system lets you program a series of if-then statements that will dictate how your characters move and behave in every situation. It’s as complex as you want it to be. Then Auto Combat let’s your units fight the encounters for you, and once it’s done they can Auto Replay the same encounter on repeat loop until you tell it to stop. This feels like a carry over grinding system that exists in the Disgaea mobile game released earlier this year, but here it does feel like a quality of life improvement. The next new improvement is with the reincarnation system where you can reset a character’s level back to 1 but now with increased stats. This is a necessity as the levels accrue relatively quickly. No, really, you’ll average roughly 40 levels per combat encounter. It’s kind of wild and works for the sake of humor because what’s the difference when hitting someone for 10k damage when their life pool is 5 million. What’s the saying? If everyone's super, then no one is.

Along with the aforementioned improvements, there’s the other basic Disgaea systems such as item worlds (procedurally generated dungeons inside every item to level them), dark assembly where you bribe demon congress to pass bills for your benefit, and juice bars to upgrade experience, quests and stat boosts. That’s my secondary warning for those curious about the franchise. Games like Advance Wars or Final Fantasy Tactics seem simplistic when compared to the systems on systems that exist in Disgaea. Managing dozens of troops, upgrading weapon stats, leveling each weapon individually, reincarnating, grinding, bribing senators: there are endless new tasks to learn and master. It’s daunting at best and overwhelming at worst. The game onboards you slowly, but drowning slowly is still drowning. It may not be for everyone.

Disgaea 6 doesn’t break the mold from its predecessors but what it does add are welcome inclusions. The art is gorgeous and the story is fantastically written, being both hilarious and heartwarming. Unfortunately, the story does slow down the action to a screeching halt. As always with the series, there are systems on systems that can become quickly overwhelming if not taken in stride, but when engaged they let you customize the game in infinite ways. Overall, I enjoyed my time with the game. It has a consistent quality that has remained interesting over the years. It may not be the best tactical RPG, but the Disgaea name still holds weight within the genre, and this entry is no different.