My first RPG is just a scooch too easy

Miitopia is a curious little game. Originally released on the 3DS in the twilight of its life, the Mii-heroed role playing game has been given a second go-round on Switch. I had no knowledge of it until now, but was eager to dive in and see if the original release’s less than stellar reviews still held true today.

All across the lands, the evil Dark Lord has stolen the Mii townspeople’s faces, whisking them away and plugging them into big baddies. As the hero, your job is to travel across the land to rescue their visages and defeat the Dark Lord. At the start of the game (and several points throughout the story), you get the chance to give each character their own names and customize their Miis.

Mii making is the most fun part of Miitopia. My family sat together, and for over an hour went through each character making wacky faces and giving them silly names to some while trying to make family members with others. You even get to make the face and give a name to the evil dark lord! Out in the world, you get the option to put additional wigs or makeup on any team member, with various color and accessory options. There’s just a lot of opportunity for hilarity with how many options and opportunities to make characters of your own creation. 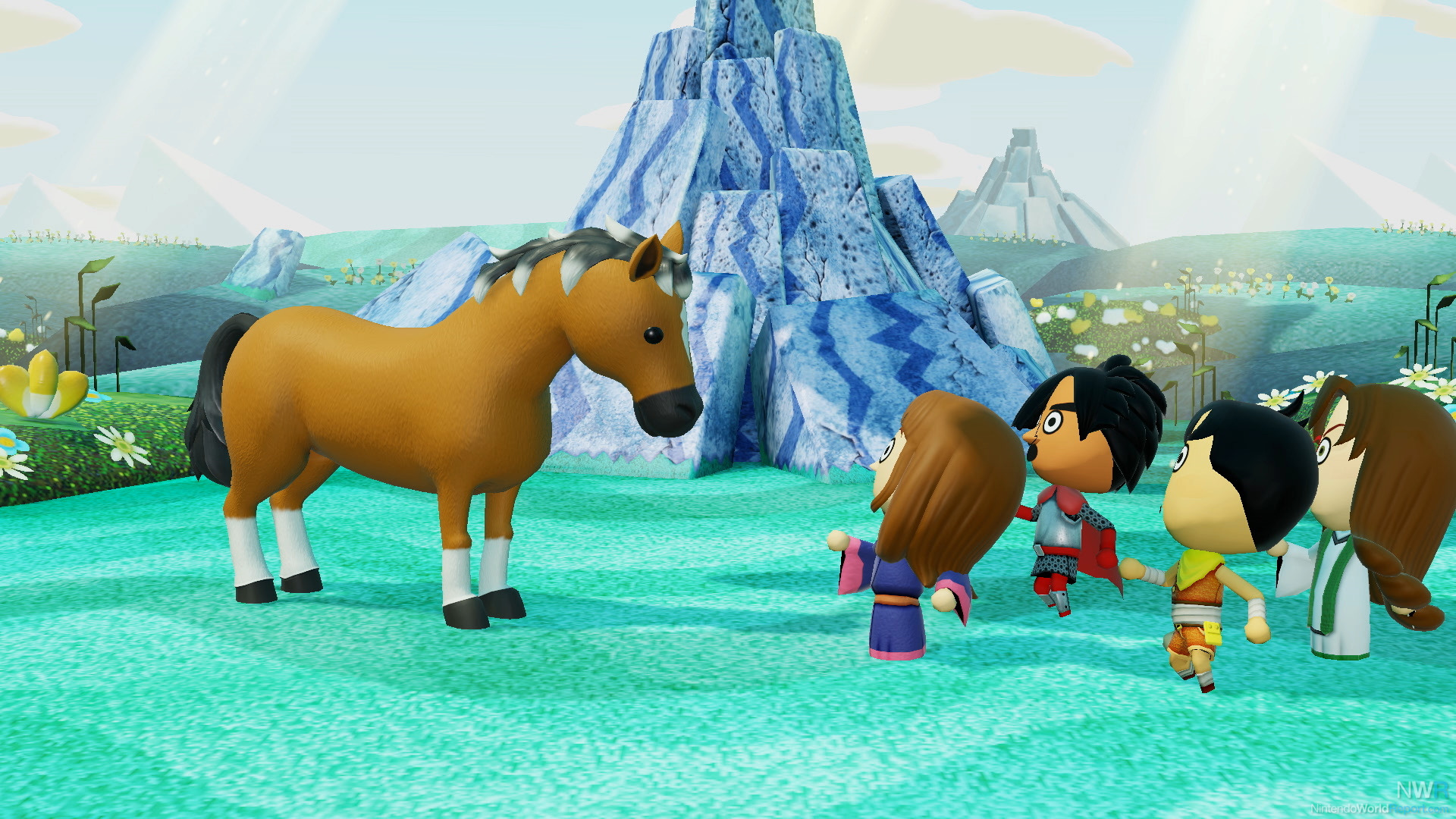 If the mii tools are robust, then the rest of Miitopia is incredibly shallow. You have no active control in traipsing along the overworld, instead dotted lines that act as individual levels that are automated walking scenes. In these sequences, you’ll encounter battles, chests, and other landmarks along the way. Battles are turn-based, but the only character you control is the main one. Other teammates are autonomous, choosing their own attacks or item usage. If you think that’s too complicated, Miitopia offers an auto battle option, so you don’t even have to play it. Frankly, given how simplified the battles are, I have had it on auto battle since I got past the two hour mark.

That baby pool depth is disappointing because there really are some neat systems at play. Inns between exploration have several rooms in which you place teammates. Sharing rooms or going on outings payable by tickets increases a friendship level that gives extra team-up perks in battle. Mini games like a roulette wheel and a rock-paper-scissors game give chances to win extra perks. The little vignettes shown when you send two of them to an outing are super cute. They can even get jealous of each other, get in fights, and can hold grudges that cause debuffs in battle. Even with being on autobattle, there is some fun to be had tinkering with the relationship system and juggling which room teammates share.

The 800 lb gorilla in the room for Miitopia is the asking price. While I understand Nintendo’s stance of not devaluing their software, it’s so hard to justify unless you were a diehard fan of the 3DS one and want it on a modern system. Even if you’re looking for a relaxing, no hassle entry into role playing games for you or your children, that price tag is prohibitively expensive.

My nine year old son loves Miitopia. He’s played it for almost as many hours as I have and I suspect he won’t be stopping anytime soon. I haven’t hit those same highs he has. The core battle system is too thin, and the activities and charming character interactions aren’t enough to paper over that problem. This is the most robust mii maker, but it’s all at a price that’s downright terrible. I wanted to like Miitopia more than I did, but it’s more like a Mii-nopia.

I loved Miitopia on 3DS. I would buy the Switch version if I had time to play it