A gripping narrative mystery where you play a murderer covering up her crime.

A lot of media over the years has routinely focused on whodunnit murder mysteries. Some sort of detective character enters the scene and tries to figure out who perpetrated the crime. This style has been so prevalent it’s become a trope. Overboard from 80 Days developers Inkle Studios turns that traditional setup on its ear. The game, set during the 1930s with outsized style and memorable period-relevant music, begins with the player character, Veronica Villensey, killing her husband Malcolm by pushing him off the SS Hook on its way across the Atlantic. The goal is to get away with murder and gallivant off with riches.

You begin to control Veronica when she wakes up in her cabin the morning after. You then select different dialogue options to talk with other passengers and crew, traveling to different parts of the ship to figure out how best to get away with murder. Every action you take chews up valuable time, however, as you only have a few hours until you reach American shores and the passengers get suspicious about your missing husband. While it’s certainly possible to stumble into progress on your first play, odds are you’ll wind up getting caught in a lie by a passenger or two and ending the day in jail. That’s when Overboard’s most novel trick takes hold. 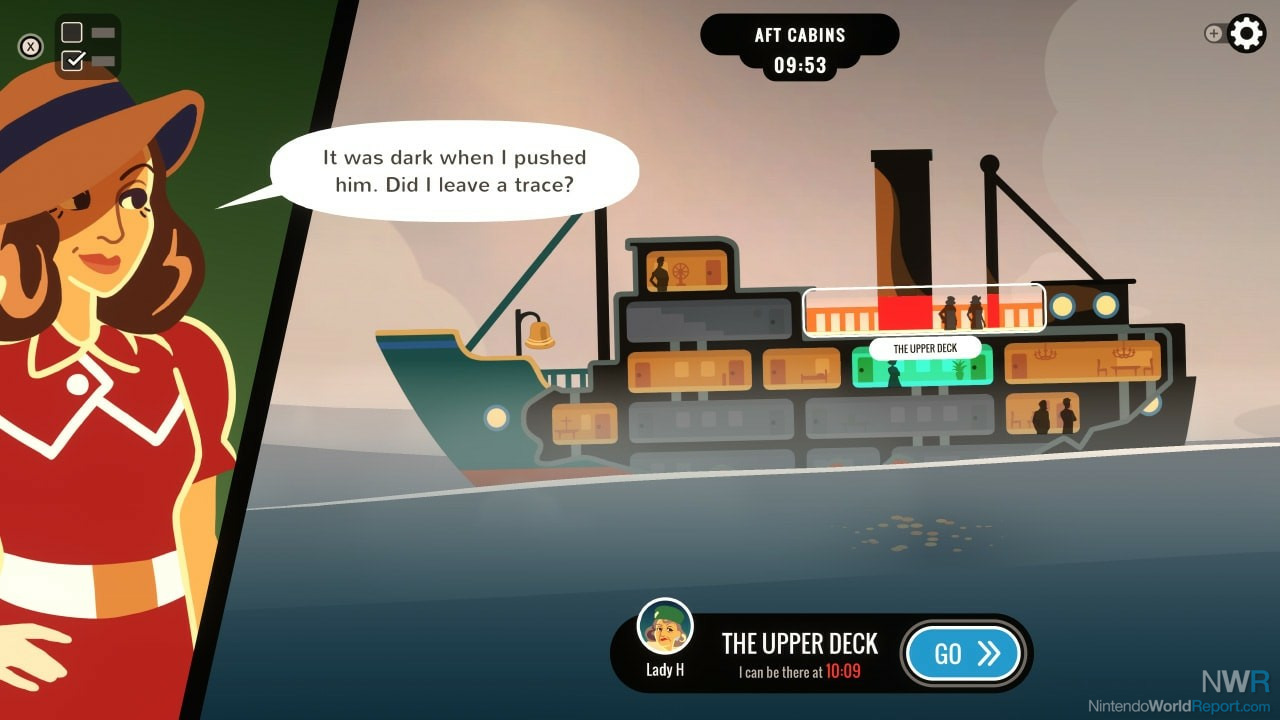 Overboard is a time loop game, as you keep going through the day’s events until you avoid getting fingered for murder and tie up all loose ends. It didn’t take me too long to find out a way to get Malcolm’s death to be ruled a suicide or pinned on someone else, but it wasn’t the optimal outcome, since some folks still had suspicions and I didn’t walk away with Malcolm’s sizable life insurance payout. Every named character has some kind of story thread to follow and they often intersect with each other. It can get overwhelming, but the presentation does a good job keeping you focused on what to try to figure out. Your Veronica doesn’t necessarily wake up knowing what happened the day before—you do regularly repeat interactions—but you have that knowledge and the game measures that persistence through a list of posed questions you need to find answers to. It could be something like finding out why Clarrisa Turpentine is crying or trying to figure out how to sneak away Commander Anders’ skeleton key.

While a lot of events do remain similar, you can affect them in subtle ways by previous actions or even the time of day you have these meetings. The setup is simple at a glance, but so much depth is woven into the twisting narrative and you can do so much to play with it. It’s much more complex than a simple murder, as everyone on the boat is up to no good in their own way. An in-game hint system does sort of exist in that Veronica will have a thought bubble to start off every successive playthrough that references something to try to figure out that went wrong during the previous attempt. There’s also a chapel on the boat that features a voice of God that Veronica can pray to that will do some fourth-wall breaking and give you some ideas of what to do next. It’s also very easy to just restart a day if you’re barking up the same tree again or want to quickly try something else. 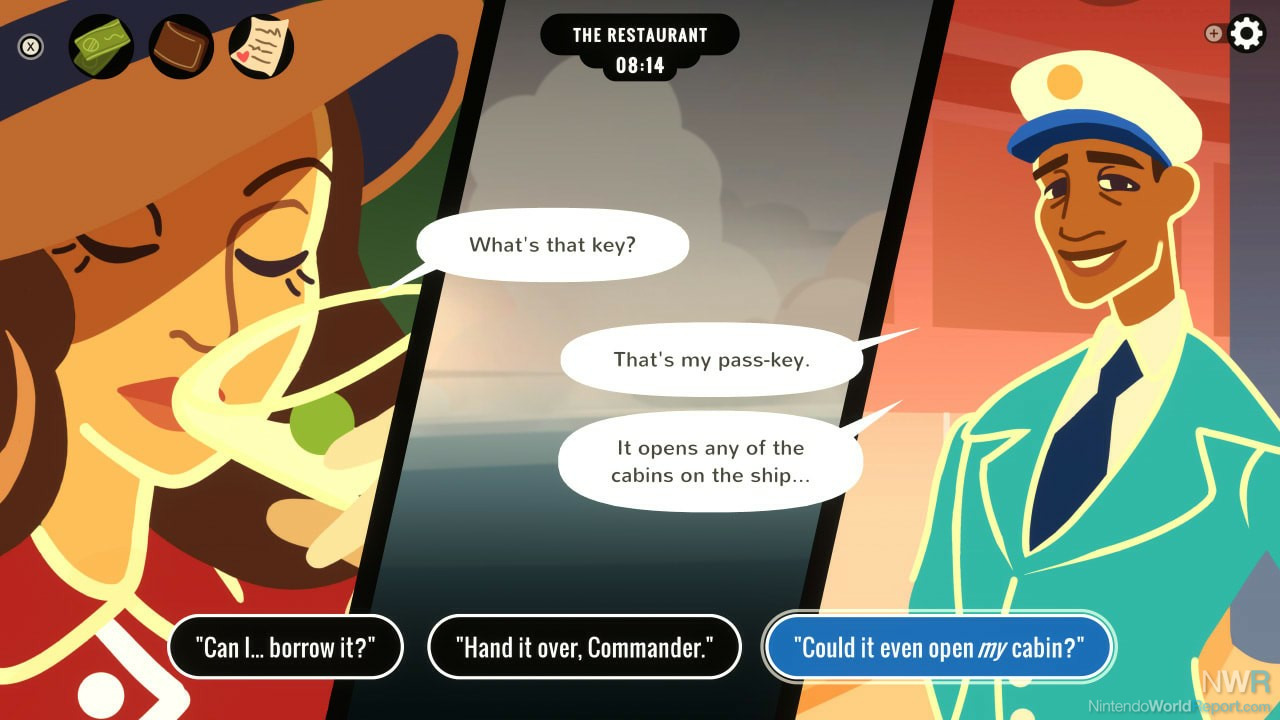 I’m largely just blown away by how deliriously fun this intricate narrative is to try to puzzle out, but the late-game focus on repetition started to wear thin. This isn’t a terribly long game, with the average run taking a half hour or less, but it still grew tiring repeating the same steps to get access to that aforementioned skeleton key. You can fast-forward through conversations you’ve had already, which definitely speeds up the process but still takes time.

Overboard is a brilliant narrative video game through and through. The unique premise sets up a tangled web that is engrossing to figure out, as you take your villainous widow through all sorts of scenarios where she does everything from kill again to perfectly set up someone else to take the fall. This might not be as altruistic as other time loop games in the pantheon, but it’s certainly one of the most ingenious in its design.