A launch title for Nintendo Switch, Super Bomberman R stuck close to the tried-and-true explosive formula but didn’t manage to set the world on fire. One of the sore spots, at least for me, was a lag-filled online experience, a fatal flaw given the precision and timing involved in a Bomberman game. Fast forward more than four years later, and Konami is bringing a free-to-play battle royale style version of Super Bomberman R to Switch, less than a year after it came exclusively to Google’s Stadia platform. I’m happy to report that Bomberman makes the jump to online survival winner-take-all quite well, but progression can be slow for those who don’t purchase the optional battle pass.

For the uninitiated, Bomberman involves moving your choice of character around a top-down, 13x11 grid (at least that’s the size in this game) as you attempt to blow up the competition. Each area is filled with destructible blocks that can contain power-ups to increase your bomb’s blast radius, the number of bombs you can place at a time, and your movement speed. In Super Bomberman R Online’s Battle 64 mode, 64 players start out across 16 play areas with a timer counting down from 60 seconds. Once the timer hits zero, the play areas are gradually removed until only one remains, where any players still in the competition are left to duke it out until there’s just one Bomber standing. 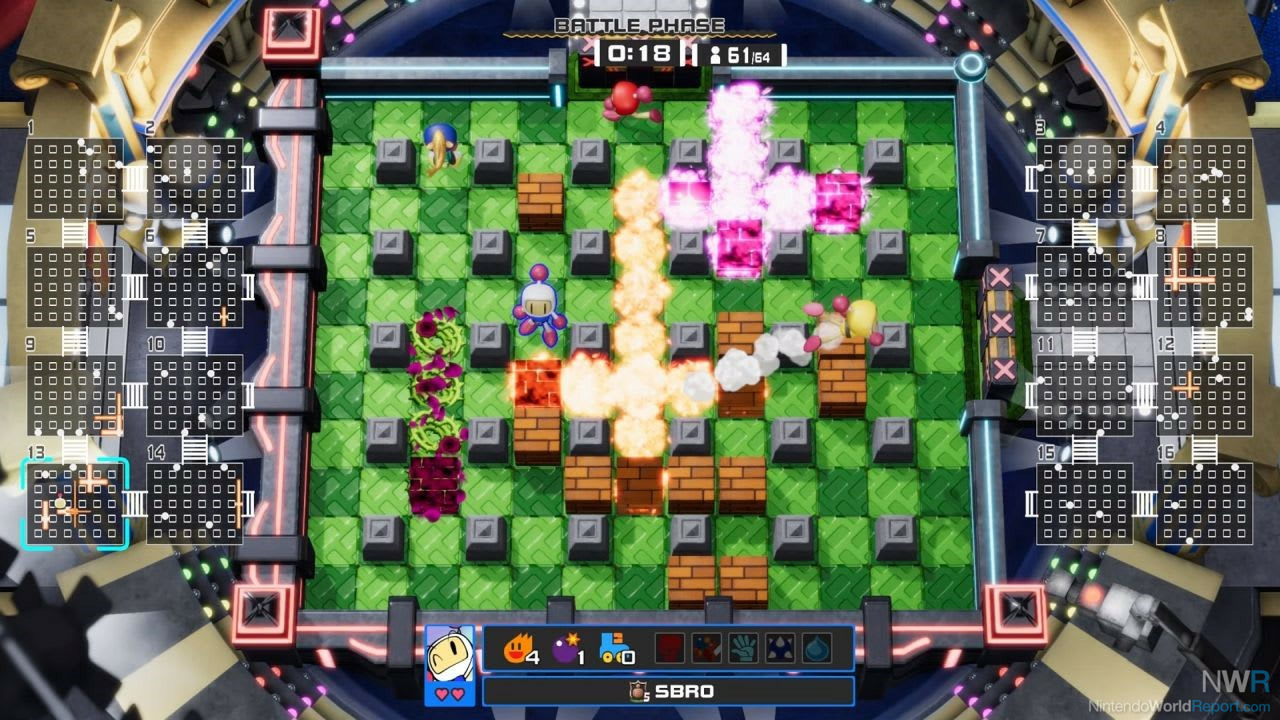 Each player starts off with two hearts, which means you can take two hits before being eliminated. Occasionally, heart item pick-ups will show up, too, letting you replenish a missing one. The standard kick, punch, and grab items appear as well. Initially, only the eight different colored Bomber characters are available to play as, with each having slightly different attributes. White only starts out with one bomb, no speed ups, and two bomb radius, but he can go up to a maximum of eight in all three of those stats. Pink starts out with a total of five in each of the three primary stats, but she can’t go higher than that, and the punch and grab abilities are crossed out, so she can’t pick up those items. In terms of extra content, there are two additional free characters on rotation, from Konami franchises like Metal Gear Solid, Castlevania, and Contra, but the other 12 come with the Premium Pack DLC, which also allows for the creation of private matches with friends.

Another way that Super Bomberman R Online is monetized is through its two-tier Battle Pass. The silver tier is free and offers some minor rewards for regular play of the game. The gold tier covers a 90-day season and costs 800 Bomber Coins. This currency costs real money through the eShop, but it can be earned as a reward within the gold tier. Some of the other rewards include costumes, profile tags, poses, and even musical tracks. In each season, specific characters will also be up for purchase, with Old Snake Bomber (500 Bomber Coins) being available as part of Season 1, in addition to Bean Bomber (Free), as cross-promotion with Fall Guys. Bomb skins, taunts, and other cosmetics can also be picked up with Bomber Coins. There’s also a separate Start Pass that offers free rewards as you play. Each of the passes described here goes up to level 100. 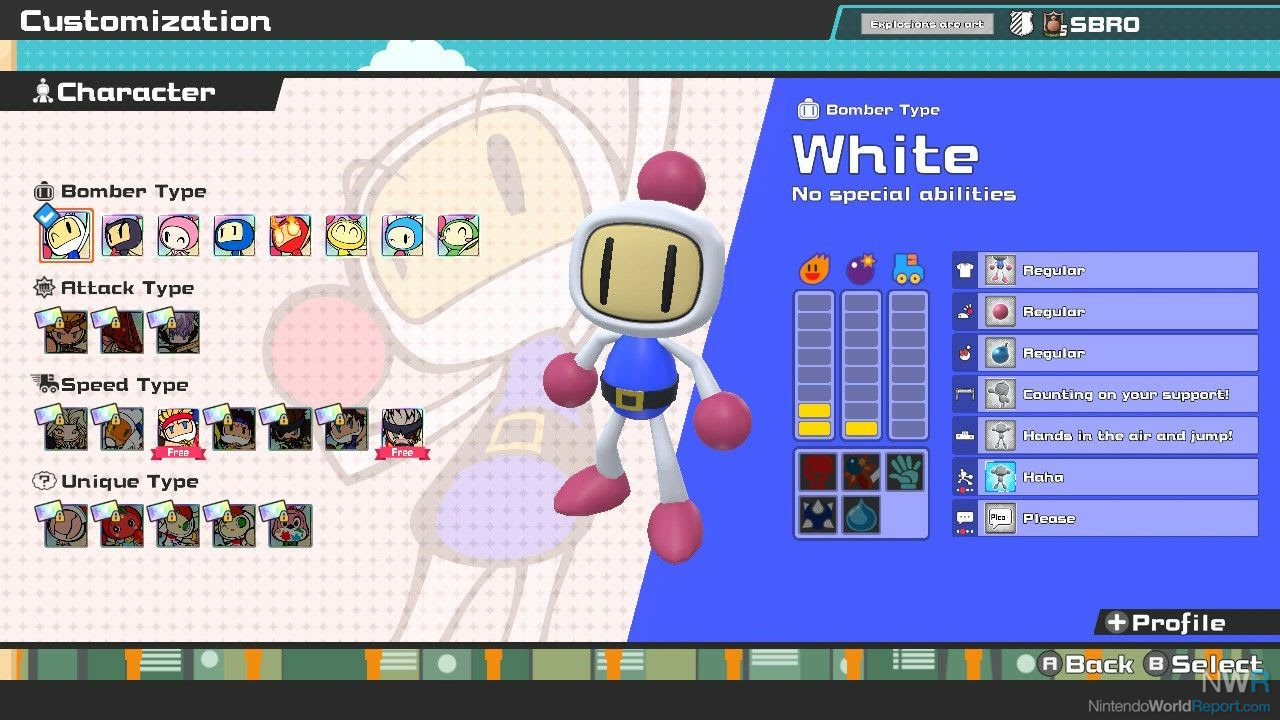 Back to the business of bombing, how does the game actually play? Well, across dozens of matches I’ve encountered no noticeable lag. It doesn’t take too long to hop into a Quick Match, thanks to full crossplay, but I’ve experienced a few matches where the character selection screen countdown basically times out as soon as you reach that screen; fortunately, this wasn’t the case for most of my matches. In addition to the main field of play, all 16 areas are indicated in miniature on the borders, so you can see which areas are left and chart where your character is heading. The visuals are a little fuzzy, but all of the important elements are still easy to see. Regrettably, there only appears to be one standard environment, which Bomberman fans are sure to recognize. In private matches, there are eight arena types to choose from and other options to customize the experience. There are open spots in the menus that indicate new stages types may show up in private matches and in the standard Battle 64 mode, but we’ll have to wait and see on that.

Super Bomberman R Online is a welcome addition to the Switch library, and provides an engaging and lag-free online experience. The core Bomberman gameplay lends itself well to the battle royale format, and the fact that players can enjoy much of what the title has to offer without spending a dime is a nice bonus. Ranks, levels, and grades all provide incentives to shoot for, if you’re so inclined, but the grading for each season isn’t really explained anywhere. Another issue is that there’s no local co-op option; every player needs to have their own game and Switch console. Regardless, any Bomberman fan should be picking this one up. I can readily admit that I fall into that camp, and I’ve been having a blast.