Spending a week in Knockout City

It’s really hard to compare what it’s like to play Knockout City by Velan Studios to other games. It’s possible, for sure: Knockout City is really just a three vs. three arena combat game, but that description is too simple for how many layers there are to the game. Most people will think of Halo or Call of Duty when you say the words “arena combat.” However, Knockout City isn’t only a point-and-shoot like those games. This is dodgeball. 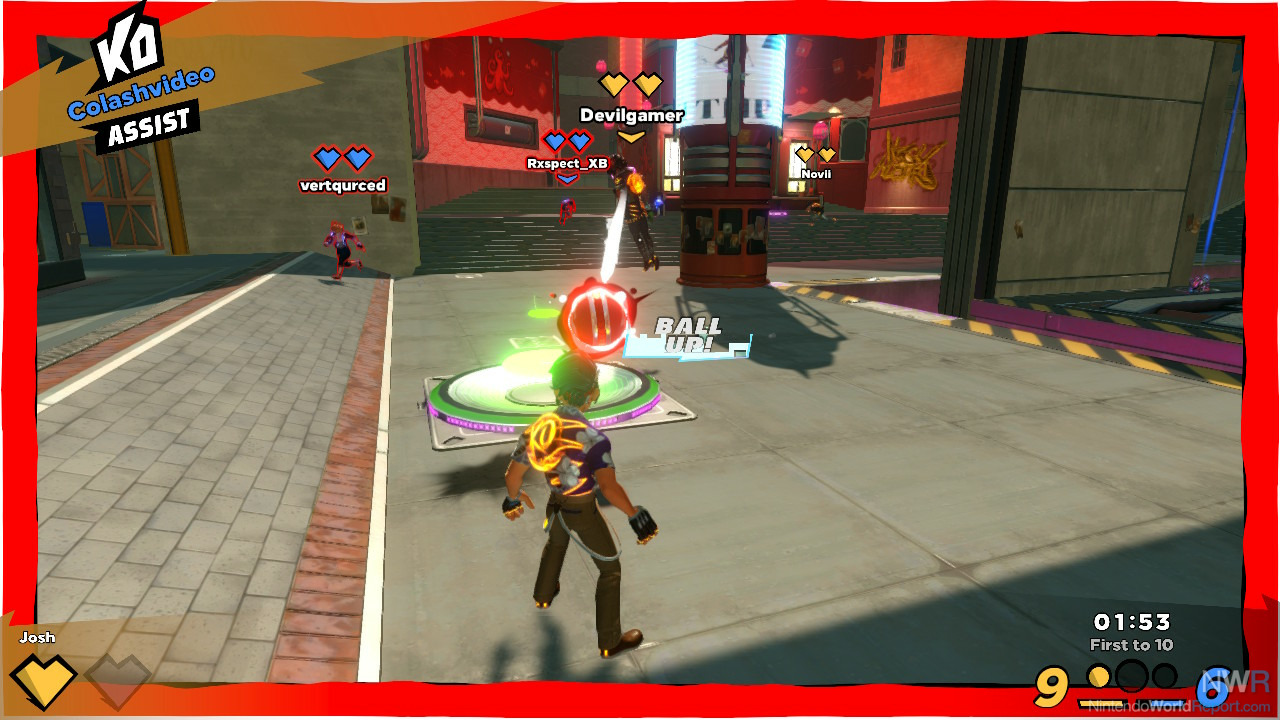 What a typical game looks like in Knockout City is three people loading into a map to play against another team of three. The first team to get ten knockouts wins the round; winning two rounds wins you the game. You don’t spawn in with a dodgeball, of course. Those are found in various spots around the map, or anyone on the team can become a more powerful ball by pressing R. Once you have a ball or a teammate in ball form, the real fun begins.

The opening paragraph is a little unfair to the more traditional shooters out there, but it’s true. Successfully beating an opponent in Knockout City involves bluffs, fakes, and tricking your opponent in ways that make it feel deeper than comparable games. The most basic way to describe how this plays out is that it’s a third-person shooter incorporating the fighting game neutral. It feels incredible to master. The core of this is the lock on system; preparing to throw a ball will lock onto the nearest target. Locking on to a target means that a thrown ball doesn’t miss. I would normally hate this in an arena shooter with guns, but it’s integral here. Without the lock-on, Knockout City would be another game focused on who can aim better. There is a place for that kind of skill expression, but the real joy of Knockout City is the miniature mind games between opponents. Those would be lost without the ability to lock on to your opponents. 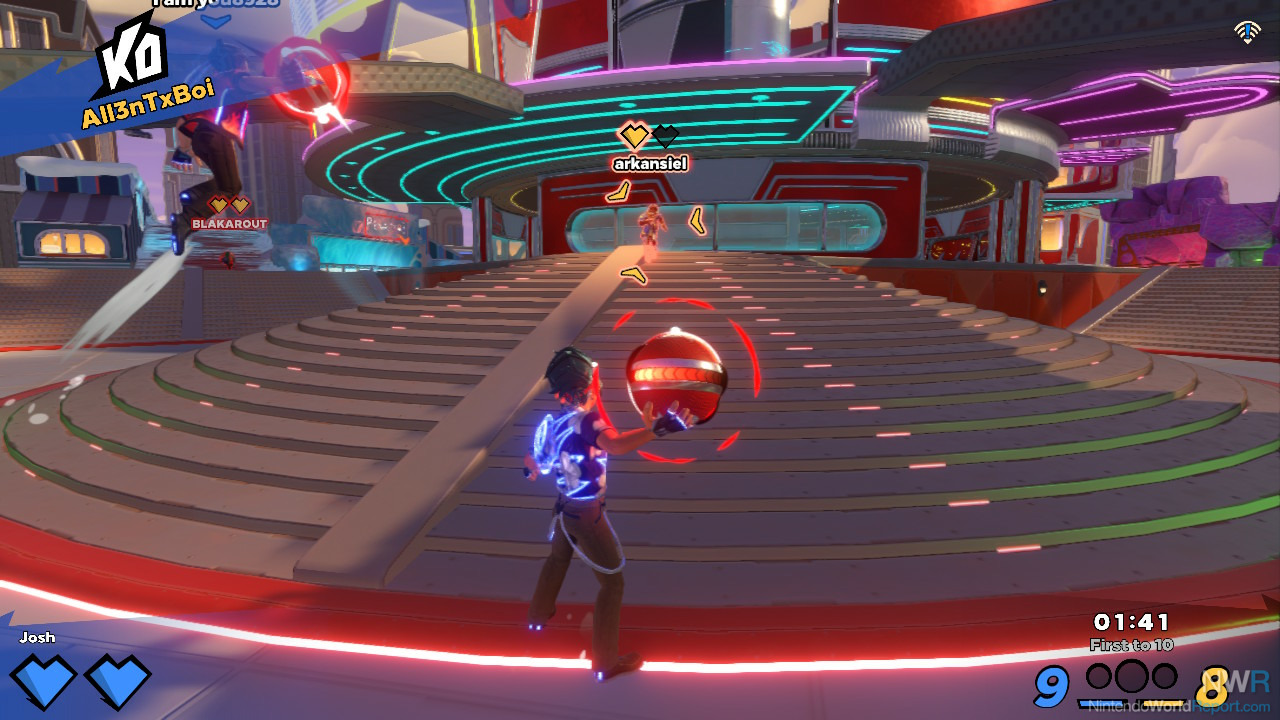 There is a lot of counterplay to being targeted by an opponent. Thrown balls can be caught or dodged or blocked by terrain, which are all fairly easy moves to execute without much effort. Players are alerted to being targeted by an opponent by a red outline on the screen appearing. That’s when you have to quickly decide whether to try catching the ball or dodging out of the way. Catching and dodging have a decent amount of end lag, so the attacking player will try to bait out those moves first.

The player throwing the ball has several tools to force their target into a mistake. Charging a throw will change the speed at which a ball travels, but a charged throw can be canceled at any time before throwing it. Passing between teammates or catching an opponent’s ball will overcharge the ball, making it travel even faster. Clicking in the right stick will make your character fake a throw. Using one of the double jumps while throwing will lob the ball while the other double jump will curve it. Lobs and curved throws have a different timing than normal throws. 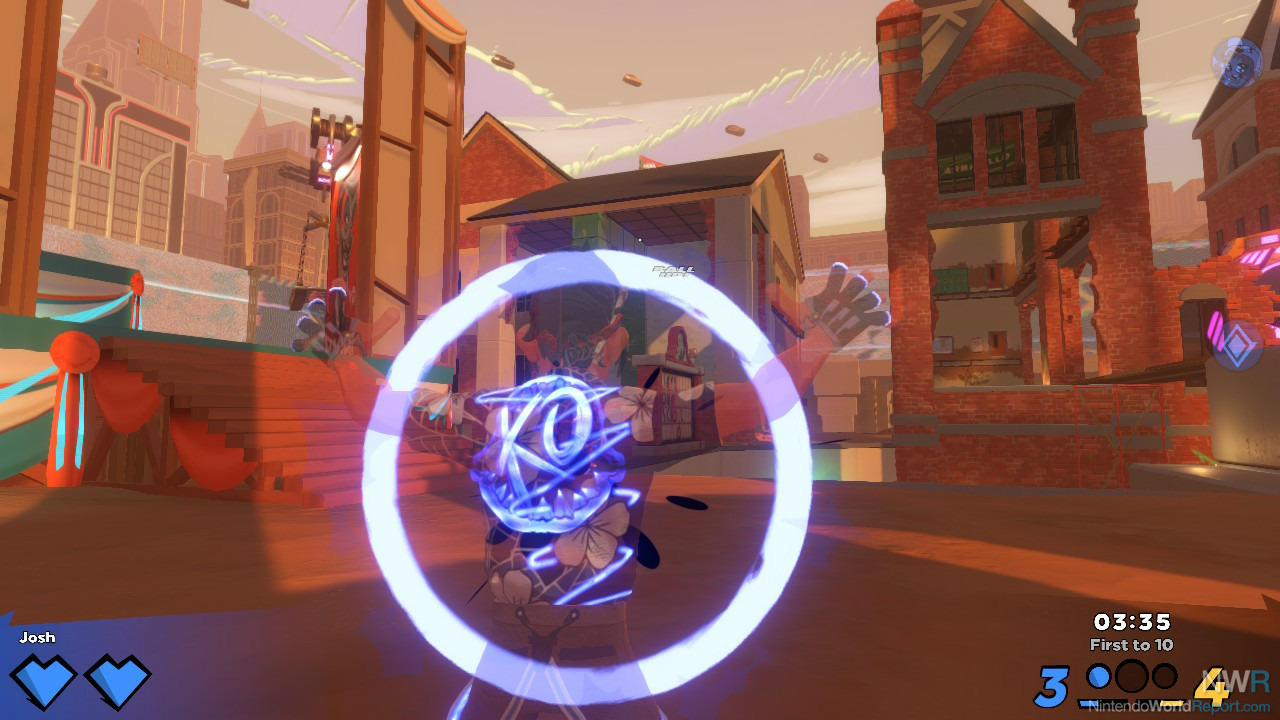 It’s the combination of all these different ways to attack an opponent or save yourself that have me hooked. Being caught without a ball is still engaging. Trying to guess when an opponent will stop bluffing so you can catch their throw is thrilling. It’s equally satisfying to cause opponents to flinch by swapping between fake throws and passing to a teammate. Fully charging a throw then canceling it to throw a slow ball at an enemy has scored me several KOs due to the timing mix up. Even just playing with space can trip up an opponent. On several occasions, I’ve made an opposing player backup and fall off the level simply by walking at them with a ball. That’s how deep this system goes. Sometimes your most powerful move is pressing forward. There isn’t a similar option in another PvP game that I’ve played, shooter or otherwise.

And that’s only the combat portion. Each of the arenas these matches take place in is very fun, and has its own unique twist. Knockout Roundabout has cars circling the outer part of the arena that will stun players if they get hit by one. Rooftop Rumble is a fight on the top of two skyscrapers with one bridge between them. Players can either brave the bridge or hang glide across on the sides. My favorite stage is Back Alley Brawl, which has these pneumatic tubes that will whisk players to the other side of the map. These are great for quick escapes or punishing flanks. 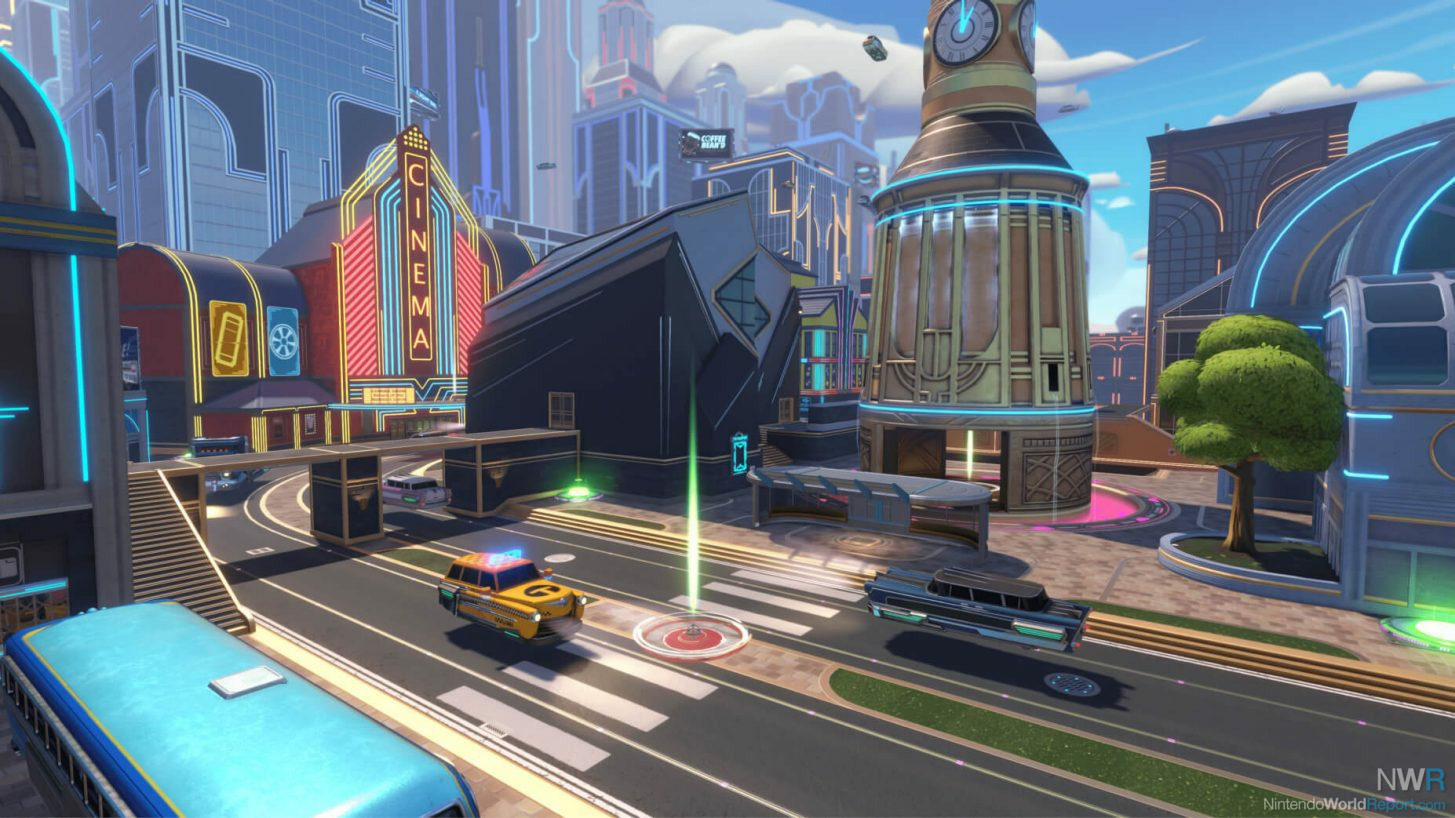 All of the nuances in the gameplay wouldn’t matter if the game suffered performance issues, but I’ve only ever had it run flawlessly. I never noticed a dropped frame or moments of lag across all the different modes. From the normal modes and ranked, to even the more hectic special modes like Diamond Dash, where KOs cause collectible diamonds to fall out of the target, or Ball-Up Brawl, a four vs. four mode where the only balls available are teammates in ball form, everything played like a dream. The game does default to 30 frames-per-second, but Velan Studios included an option to drop the resolution and increase the framerate to 60 frames-per-second.

Diamond Dash and Ball-Up Brawl won’t be the only special modes available. Knockout City is intended to be a live-service game, and that comes with all the normal trappings. New modes and ways to play are going to be added over time. Ranked play is based around seasons. Dipping your toe into the ranked mode is encouraged through the use of unique items only available by reaching certain ranks. Playing either the three vs. three mode or a one vs. one faceoff mode will either earn points toward a new rank or lose them depending on if you win or lose. Reaching a higher tier will earn players rarer rewards, and honestly, it’s nice to play a few matches that people are taking a little more seriously. Right now, it is possible for a team of single players to be matched up against a premade team of three friends, which doesn’t exactly make for fair matches. It isn’t every match, but that is something I hope the developers change in the future. 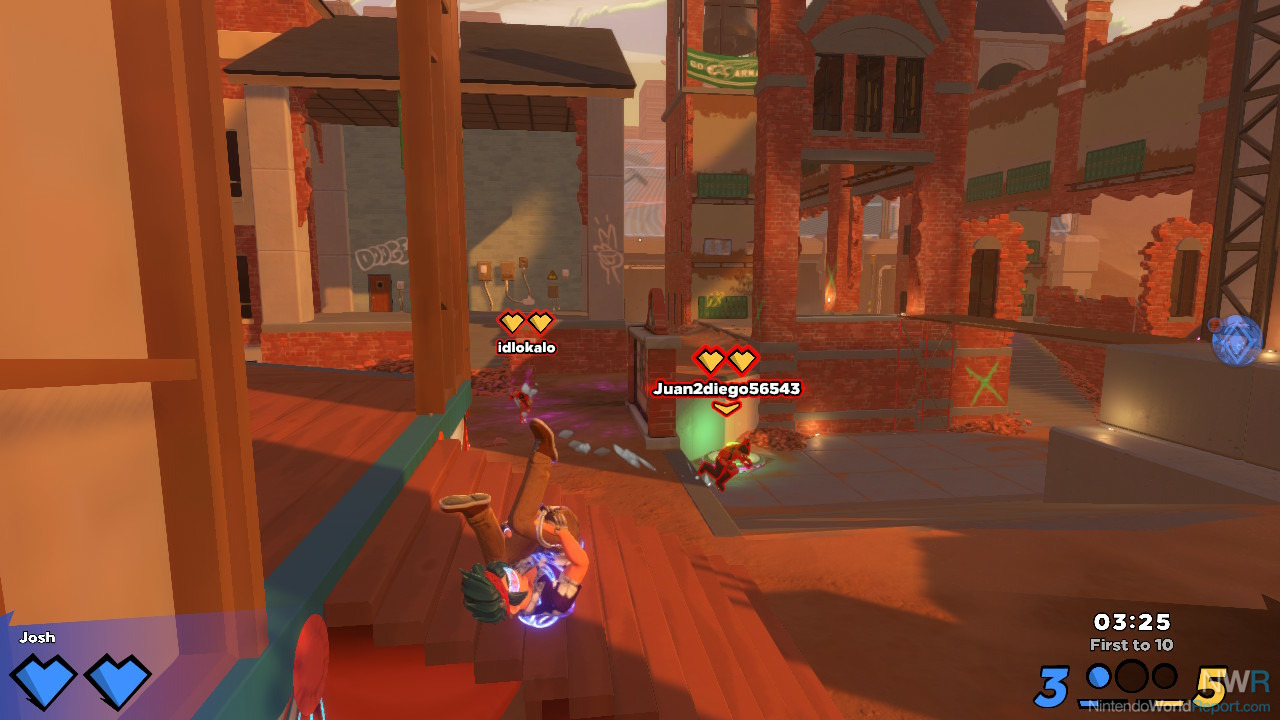 I think the artistic choices are really nice. Everything from the announcer to the soundtrack to the visuals have a retro-futuristic style. The soundtrack is phenomenal. It reminds me a lot of Empire of Sin’s jazz fusion soundtrack. The music was a highlight in Empire of Sin and it’s a highlight in Knockout City. The sound design is another strength. Velan Studios somehow got the unique sound that a dodgeball makes when it hits a surface just right.

The visuals are mildly more contentious at first. I think all the stages and the assets in them are bright and readable and look great. The problem I have is that the character customization options that the player starts out with aren’t very appealing. None of the faces are ones that I would pick in other games. The two body types available look slightly off. Every initial hair style doesn’t fit with what I want my character to look like. Making a character that I liked on the first day was basically impossible.

But these gripes were quickly rendered moot as I almost immediately unlocked cosmetics that suited me more. I have a hairstyle that, while not exactly what I would choose, looks nice. My equipped outfit is now something that I would wear in real life. Other types of unlockable cosmetic options that I normally wouldn’t care about in other games, I enjoy here. The match introduction animation I have is ridiculously fun. It’s called The Human Helicopter. My character spins down from the top of the screen and lands in a superhero pose. I start every match with a big goofy grin on my face. I will never, ever equip a Bauble in League of Legends: Wild Rift, but I look forward to unlocking new cosmetics in Knockout City. 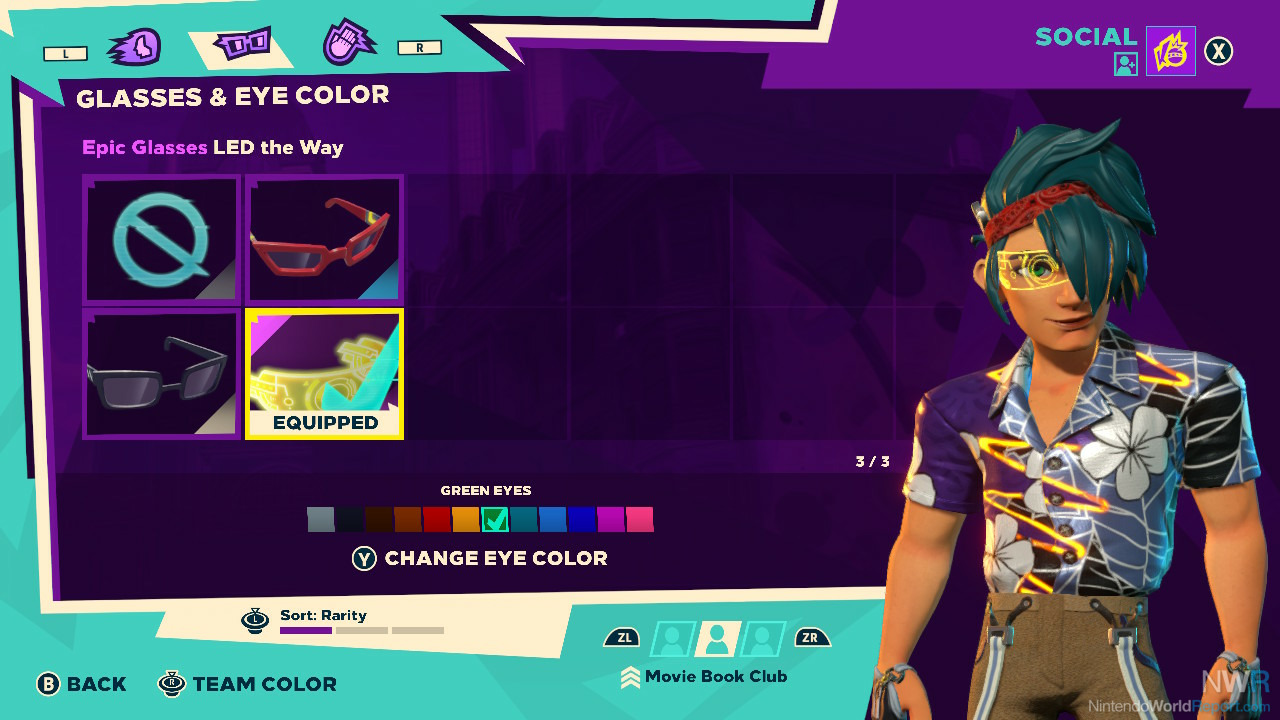 I’m floored by how much I enjoy Knockout City. Despite the first trailer for the game being a bad way to sell the concept of the game, I always thought it looked good. I never would have guessed that Knockout City would be excellent. I haven’t had this much fun with my Switch or any other game console this year. Velan Studios has made an outstanding experience in Knockout City.