This game has charm to spare, but that only goes so far.

Just over two years ago, my colleague Jordan Rudek reviewed this quirky little platformer and enjoyed it overall, but had some criticisms that made me hold off on dropping the hammer on purchasing the game. Since that time, we’ve learned that developer Christophe Galati parted ways with original publisher Nicalis, in part because they just wouldn’t let the man patch his own game because it didn’t sell well enough. Harsh toke, Nicalis! We’ll also since learned that Nicalis isn’t the best company to associate with anyway. Anyway, Save Me Mr. Tako was de-listed from all storefronts following the split, and Mr. Galati partnered up with Limited Run Games to release this enhanced, some might say definitive, edition of the Brave Little Octopus.

This version offers some improvements to the previous build. Perhaps most importantly, Tako now has a life bar: he can take two hits while retaining his hat, will lose it on the third hit, and will perish on the fourth. Tako’s hat-loving otter friend (I assume he’s an otter) will occasionally give you hints as to where to find other hats as well. You can swap the game’s difficulty at any time in a specific house in the Octopus Village. Mr. Tako wears its Game Boy influence on its sleeve, and there are a dizzying array of Super Game Boy color schemes and screen borders to choose from. If you don’t want to constantly mess with color selection, you can simply select “Auto” to let the game choose the color for you based on Mr. Tako’s location. There’s also a music player, should you feel the urge to relive the game’s many upbeat tunes.

If you’re unfamiliar with the life and times of Mr. Tako, here’s the general story: octopuses and humans are at war. Tako’s warmongering brother, Bako, is leading the eight-limbed army and he expects his younger brother to fight alongside him. Mr. Tako, however, does not have hate in any of his three hearts and rescues a captured human girl from Bako’s men. Tako then follows the army’s relentless march, rescuing humans they’ve captured, and generally gets involved in their plans of conquest and in the lives of various humans along the way. 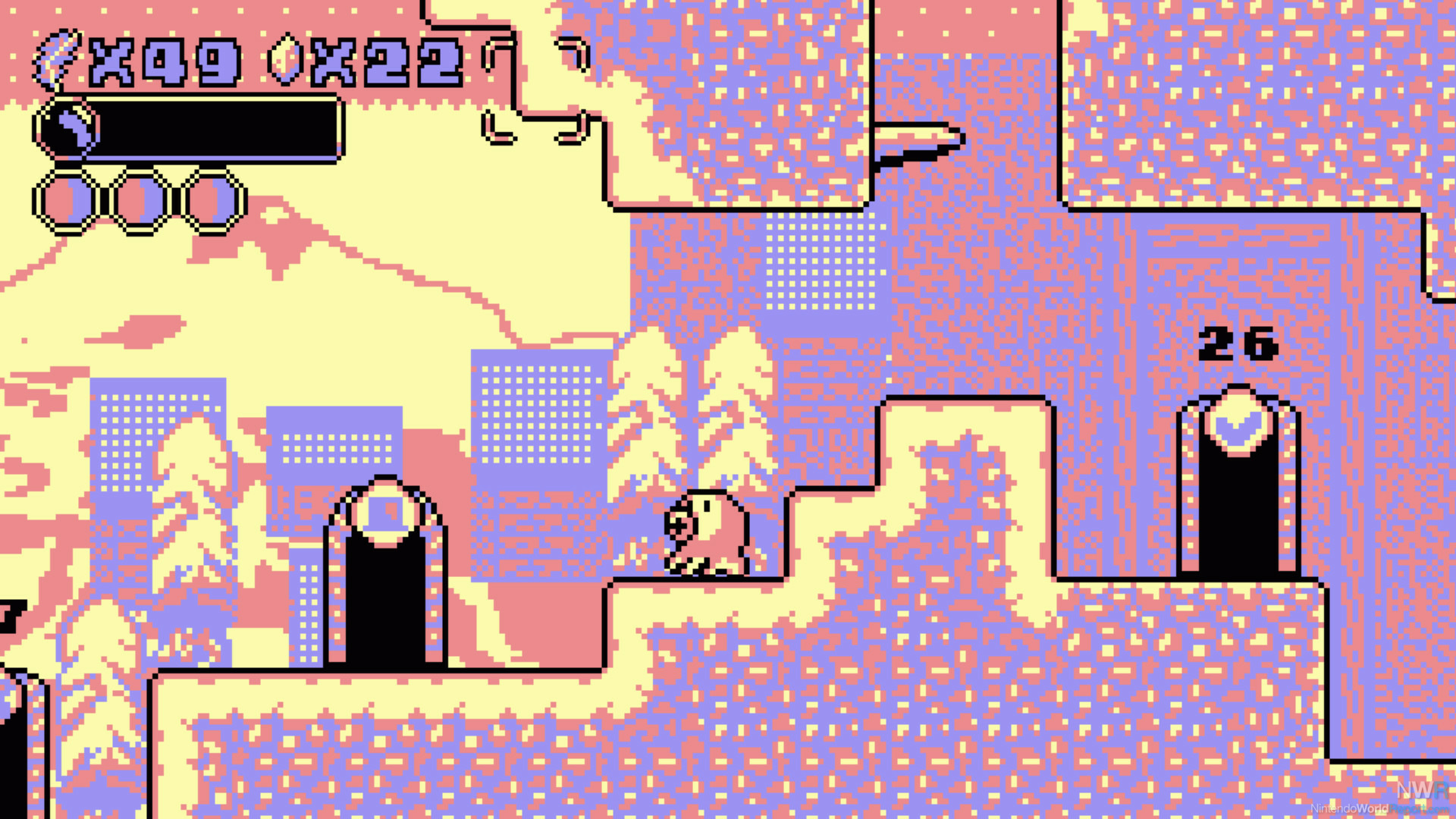 In practice, the game unfolds a bit like Kirby’s Adventure: each “level” takes place in a small “overworld” map, within which appear numerous doors to specific stages or towns. These stages represent Tako’s movement from one story beat to the next but can be revisited at any time to find any important items (mostly captured humans) that you missed the first time through. Stages generally maintain that Kirby feel, with simple platforming, enemies to avoid, and the occasional off-the-beaten-path secret to find. Tako collects gemstones, one hundred of which earns him a 1-up. Extra lives, which look like feathers, are also judiciously sprinkled throughout each level. You will never be short on lives, which was another quality of life improvement of this Definitive Edition, as it sounds like the original game limited you to 9 lives.

Being an octopus, Mr. Tako can fire ink blobs at enemies that will freeze them in place, allowing him to use them as platforms to reach higher ground. Our hero does have a semi-limited supply of ink in his squishy body, but he can find ink refills with some regularity.

In addition to his ink shot, Mr. Tako will come across a variety of hats in his travels. Hats grant our hero alternate attacks (mostly), like an ink blob that’s more like a Super Mario Land Super Ball, a short-range whip (really just his arm), archery arrow, or enemy-stunning flower “creep.” Some hats have no effect on Tako’s moveset and function as quest items. Tako will eventually find a short-range sword that actually kills enemies rather than freezing them in place, which can be handy in some situations but may limit your ability to move vertically in any given stage. Thankfully, Tako can equip two hats at once and switch between them by pressing X. He can also change hats at checkpoints, should a lengthy stage have one. There are a whopping fifty hats to try and find, although many of them are superfluous. 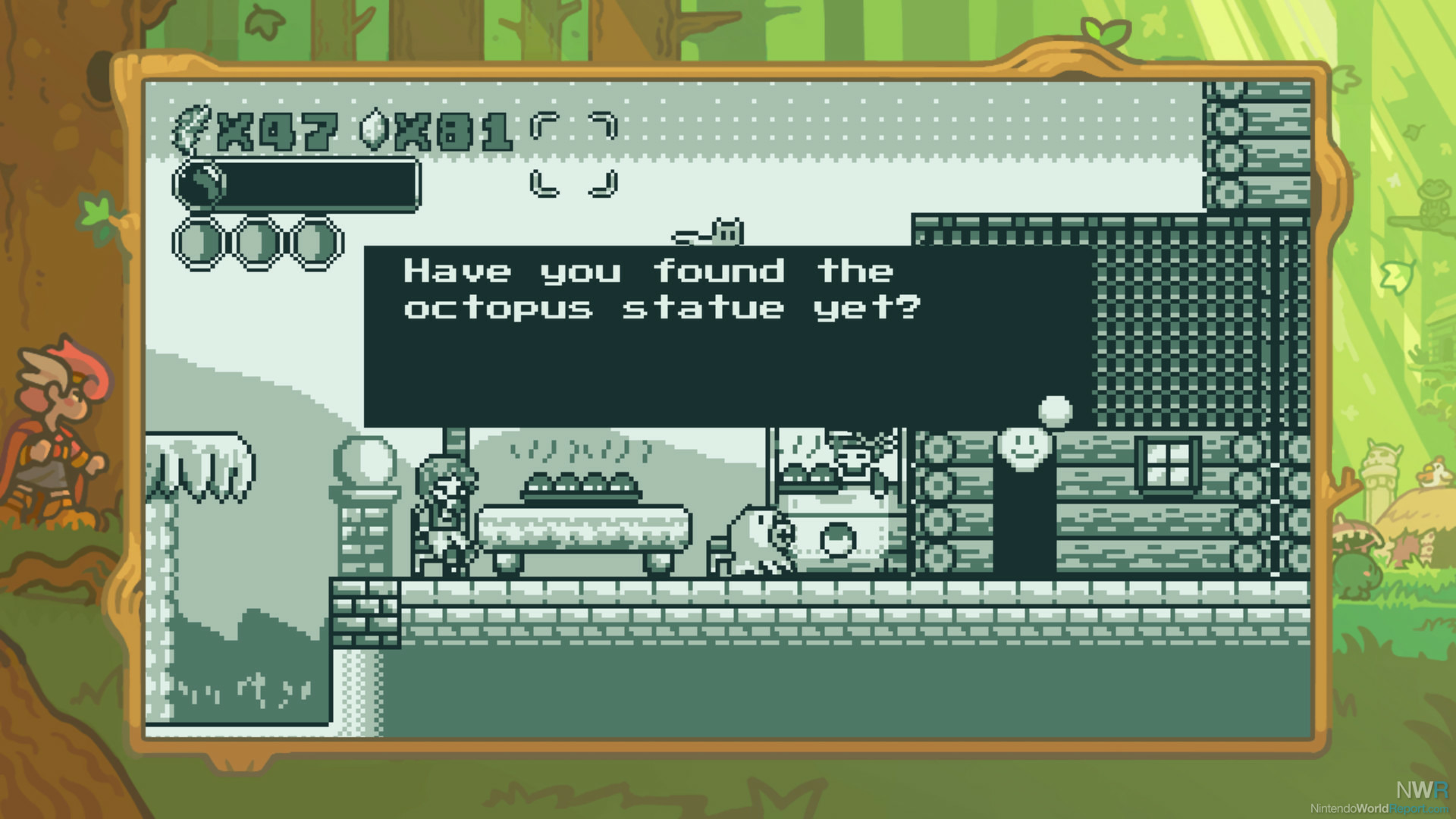 My biggest problem with Save Me Mr. Tako is that you’re mostly doing the same thing in the 30th stage that you were doing in the 3rd stage—the only real difference is how long the stage is. There are rare instances of taking control of another character, and while these segments provide a nice change of pace, these characters, regardless of species, still have an ink meter. When you play as humans, the hitbox is still based on Mr. Tako, which leads to some hilarious cases where the human’s head disappears into the ceiling during a jump. They also don’t necessarily endear you to the characters you’re controlling. Another issue is that there’s really no way to keep track of your quests, which are numerous and easily forgotten. Certain hats (like bombs) may help to progress in certain quests, but it’s never really spelled out as neatly as I would’ve liked. For the most part, you’ll going to want to keep a notepad by your Switch for writing these things down. Quest completion tends to reward you with gemstones and extra lives with the occasional new hat thrown in for good measure.

The plot is interesting to a point, but there are so many subplots, story tangents, and side characters that it just starts to feel like padding. The story is at its best when pitting Tako and Bako against each other.

The game wears its Game Boy inspiration on its sleeve and has a flawless aesthetic. Everything about the production, from the pixel art and color selection to the catchy chiptunes, will make you think you’re playing a lost Game Boy game. Christophe Galati really knocked it out of the park. I just wish the gameplay was a little more interesting! Despite my misgivings, I really do enjoy Save Me Mr. Tako, and if you’re nostalgic for the golden age of handheld gaming, this game absolutely delivers in spades.

I'm so happy this game got freed from Nicalis prison and I hope to get this version but I'm definitely still salty that I'm basically paying for a patch since I made the mistake of buying the Nicalis version.

Tako is Japanese for Octopus  ;)