Save me Mr Tako (Switch) Review

Save the last dance for me, Mr Tako.

The month of October saw the release of Dark Souls Remastered on Switch, and for many that game is regarded as the pinnacle of difficulty. For your consideration, I will submit here a game even more challenging and frustrating than any in the “SoulsBorne” series. An action platformer with heavy adventure and puzzle elements, Save me Mr Tako is much more than what it may appear to be, for better and for worse.

On the surface, you play as an octopus who shoots ink to stun enemies as you traverse a variety of 8-bit environments, but there is much more hidden beneath the waves. It draws clear inspiration from Game Boy classics like Kirby’s Dream Land and Link’s Awakening, and makes countless references to other well-known titles like The Adventure of Link, Metroid II, and Shovel Knight. Save me Mr Tako is a love letter to beloved Nintendo titles from yesteryear, but it doesn’t always show the same affection for its players.

The story focuses on a war between octopuses and humans, and the titular Tako is thrown into the spotlight when he refuses to follow orders and instead saves a human after she is tossed in the sea. The narrative becomes a little convoluted near the end, but towns are filled with NPCs who have colorful dialogue and characters that are integral to the overall story. You also have the opportunity to play as some of these characters, but in general their abilities are more limited compared to Tako’s. Side quests are littered throughout the experience, but you need to write down their details or have an excellent memory because there is no in-game journal or list of these quests, which makes returning to or solving them a serious chore.

One significant game mechanic is the collecting and using of 50 different hats. Each hat gives Tako either an ability or a buff, and some of the hats function as quest items. A running counter on the save file screen shows how many of the hats you have collected and your overall completion percentage. In my playthrough of the game, which totaled about 20 hours, I collected just over half of the hats, but I mostly ignored side quests and mini games, in which a fair number of hats can be won. In addition to the hat you are wearing, you can hold an extra one in reserve, which is good because taking any damage will cause you to lose the hat you are wearing. And speaking of damage…

In a game that I largely enjoyed and will remember fondly, one glaring design flaw is the fact that while hatless, a state you will be in for most of the game, a single hit from an enemy or stage hazard will kill you. There is no health or heart meter like nearly every other game in this genre, and because of this a sizable portion of the game is spent replaying stages and dungeons over and over because of cheap deaths and a lack of checkpoints. Lives are represented by feathers and you start the game with 3 of them; gems that you collect provide you with an extra life after you collect 100 of those. Unfortunately, you can only have a total of 9 lives, and in the second half of the game, when the stages become maddeningly long, you are likely to find yourself either playing extremely cautiously (not always good enough), which seems to go against the spirit of the game, or grinding out extra lives to make another attempt at the brutal second-half dungeons. 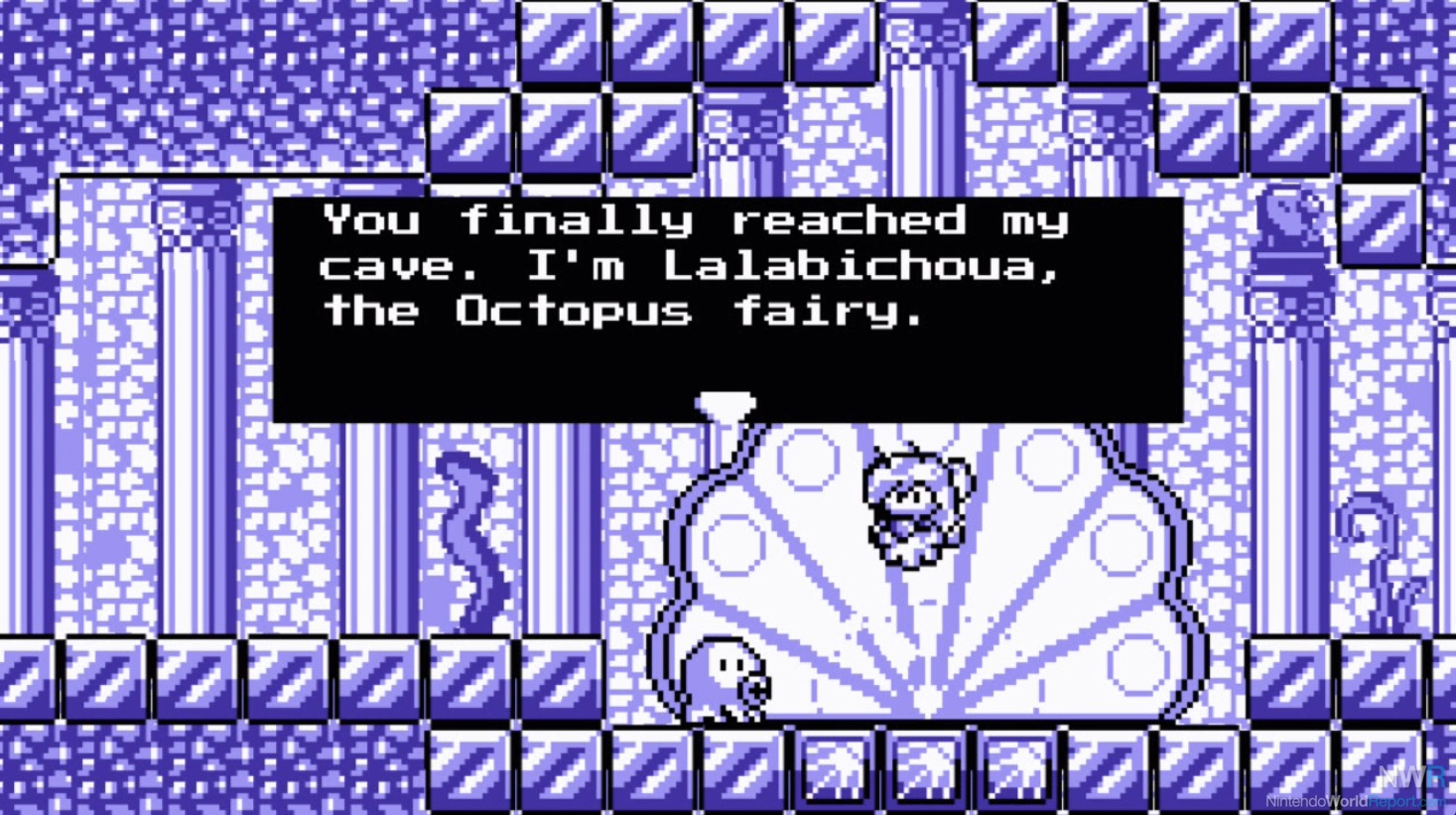 As I mentioned, checkpoints are incredibly sparse and sporadic later in the game. Some medium-sized levels might have two checkpoints; some gigantic stages might have one or no checkpoints. This problem leads to another: you change hats at stage checkpoints, so a lack of these means very few opportunities to get a hat or change your current one. Because of this, the primary hook of the game takes a backseat and the difficulty of the game continues to escalate. Another design choice that causes frustration is camera movement. When you open a door or gate by pushing a button, the camera pans to the newly-opened barrier, but the action of the game doesn’t stop, which means you can walk off a cliff or be hit by an enemy without knowing or having a chance to react to it. This camera movement cost me dozens of lives and game overs.

On the positive side, the sound and presentation of Save me Mr Tako are really strong. The music and aesthetic are reminiscent of the Game Boy era, and specifically the themes that play in each town or village sound just like those found in Shovel Knight. The ability to swap among over a dozen color palettes and a handful of screen sizes with different borders means you can change the look of the game to suit your preference. A variety of environments and enemy types make each stage different, but a few levels are extremely dark and hard to navigate, and I wasn’t able to complete them in portable mode. The hub world is divided into sections that remind me of those from Kirby’s Adventure and hold about 10-15 stages in each, and you can use portals to easily travel from one section to the next.

Save me Mr Tako is almost a tale of two games, and I so desperately want to love it. It is a very meaty title, and I would say that the experience lasts about 5-6 hours more than it needs to. A more condensed experience with tweaks to checkpoints and the addition of a real health meter would bring this title into game-of-the-year discussions. As it is now, however, Save me Mr Tako is an ambitious game that is rough around the edges, and these edges make the game excruciatingly difficult. Overall, the first half of the game isn’t too easy; it’s in the realm of more challenging sections in Kirby games. Screens and videos of the early game, however, might lure gamers into a false sense of security. Don’t be fooled: seeing Tako’s quest through to the very end will test your platforming skills, patience, and perseverance to their absolute limits. I am thrilled to have completed what I can safely say is one of the most challenging video games I have ever played. From now on, I’m no longer saying “the Dark Souls of.” For me, it’s “the Save me Mr Tako of,” and this game is definitely the Save me Mr Tako of Game Boy inspired action-platformers.

Thank you; you saved me from making a purchase I would regretted.  I love the aesthetic, the music, and the silly characters and dialogue though.