A run-based mashup of classic arcade experiences that might let players off too easy.

Jetboard Joust joins the list of eShop titles looking to capitalize on nostalgia for classic arcade staples and the thirst for run-based experiences with staying power. The premise is simple: shoot down or slam your jetboard into waves of enemies attempting to abduct civilians on the ground below you before they take you down. Across five worlds, you complete 11 levels in each before taking on the boss of each world, and along the way you earn in-game cash to improve your character and your weapons. Something strange happened during my first run, though: I finished the whole thing.

It took a few hours, but my first run took me all the way from the beginning of World 1 to the end of World 5 and the game’s brief end credits. Does this mean Jetboard Joust is too easy? There were definitely some precarious moments where I saw my health fall to zero only to cash in an extra life I had earned. I may have been playing pretty well and picked up some powerful weapons, in addition to making smart upgrade decisions; however, I’m still scratching my head about what to make of this surprising turn of events. 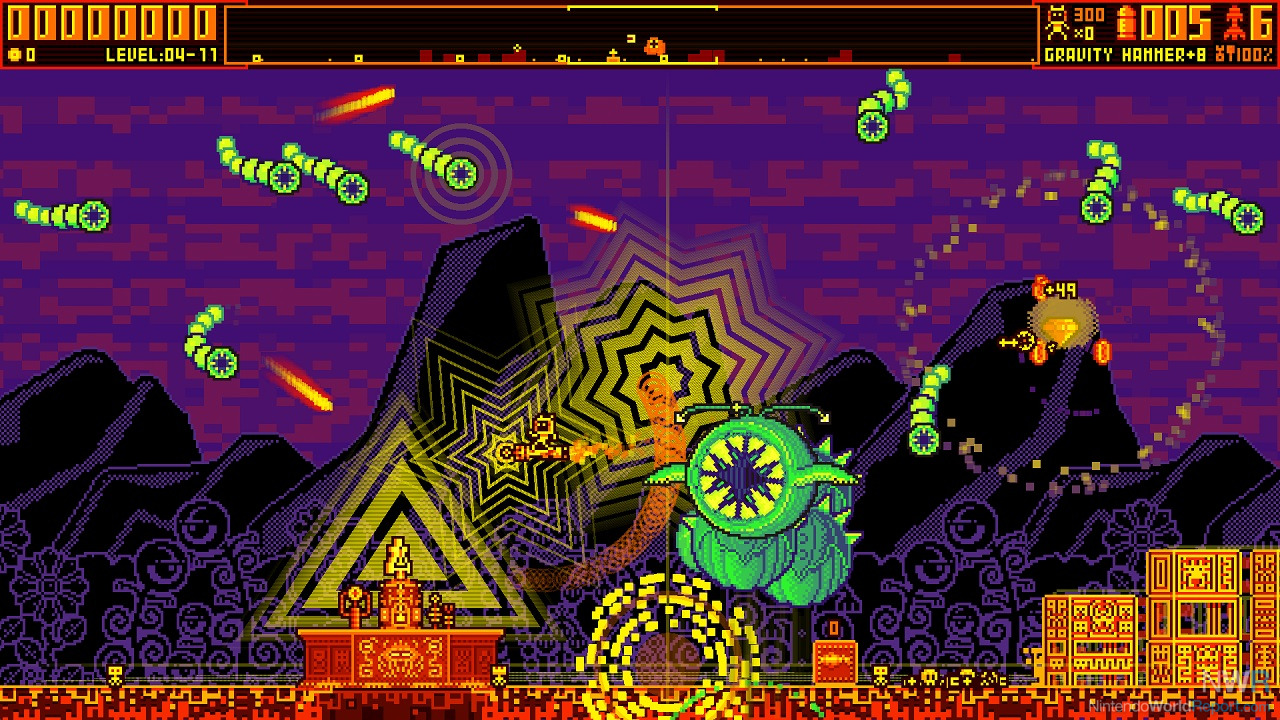 The Jetboard rider materializes at the beginning of each level through a warp gate, and from there waves of enemies teleport into the space around you shooting all sorts of weapons and attempting to capture the citizens stationed on the ground. The stages wrap around, and a mini-map at the top indicates the position of enemies to make navigation and hunting easier. Along the way, you discover special weapons, such as the Gravity Hammer and Lightning Bolt, that have limited ammo, but ammo drops fairly regularly, as does health. Between levels you can choose your path to the next and also enter a shop to sell weapons, upgrade them, or improve your overall health and effectiveness of your board. The “Joust” from the game’s title is activated with the B button and launches you forward in a line, dealing massive damage to all foes in your path. Upgrading the Jetboard makes it faster and gives you more joust charges.

Like any good arcade game or shoot-’em-up, earning points and improving your high score is paramount to the experience. Enemies drop coins and diamonds that add to your score and your money that can be spent after each stage. Money can also be used to revive your character after a game over. Destroying your opposition in quick succession will create a combo chain that boosts the loot that drops and drives your score even higher. The lack of online leaderboards is a noticeable omission, but there are over 100 achievements to shoot for, which is nice to see. 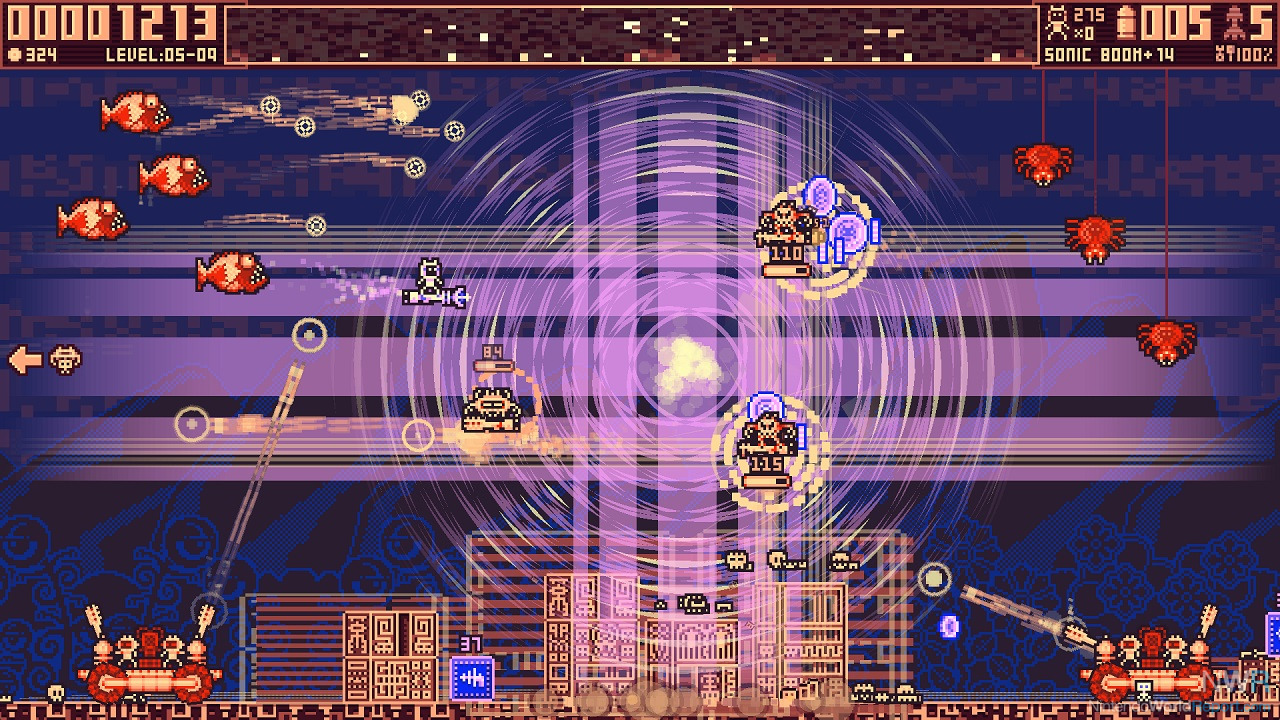 Admittedly, the gameplay does grow repetitive, with each stage playing basically the exact same as the one before it, save for the boss encounters. Most of the basic enemies consist of rival Jetboarders trying to make off with the civilians under your purview. Their health and weaponry can change from level to level, but they never seemed to pose too much of a threat. Other creatures such as fish, spiders, and insects of various types are also thrown into the mix, and I did appreciate seeing new threats all the way up the final stages of the game. Ultimately, what I’ve learned is that longer sessions of Jetboard Joust are simply less enjoyable given the simplicity and repetition of the gameplay.

That said, had the difficulty been higher, I would have had the opportunity to take advantage of one of the game’s key mechanics; namely, using keys earned throughout the different worlds to start subsequent runs using unlocked warp gates. Put simply, you can jump ahead to later worlds after reaching certain levels. I didn’t actually see this in action until I had rolled credits, after a single run, and went to restart the game. Again, I’m not sure if this is a knock against the game. 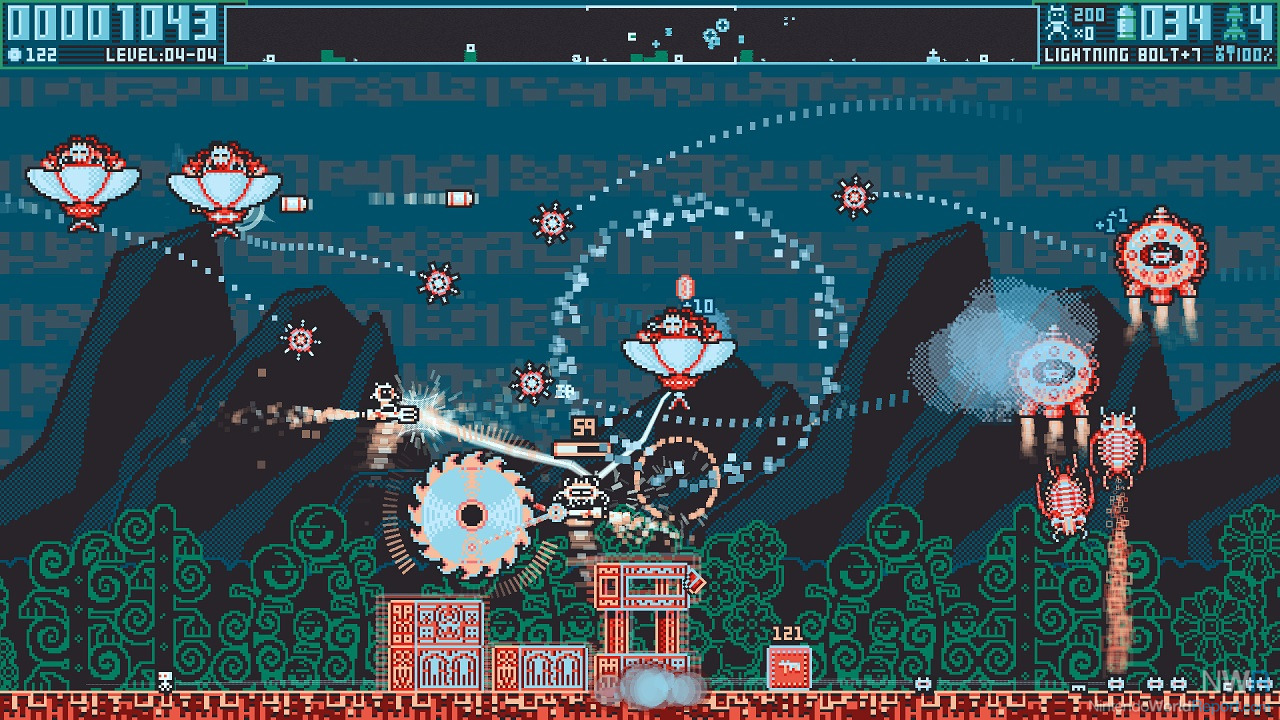 While I had fun playing Jetboard Joust, it might need some balance tweaking to make certain mechanics more meaningful. Every stage features a different five or six-color palette, which both helps and hurts longer sessions, by differentiating levels but also offering less visual stimulation. Compounding this is the lack of gameplay variety; the boss fights presented a fair challenge, but the levels leading up to them had a tendency to drag on. Even the optional treasure rooms that are unlocked by engaging in a final duel at the end of every stage fail to provide enough risk for their reward—I went for them on each level and never failed (Did that make me too powerful?). Although I’m filled with questions about the validity of Jetboard Joust’s roguelite status, it plays well enough and can likely provide solid entertainment in short bursts. Fans of classic arcade games may dig this new twist on the high-scoring chasing arcade shooter, but after one full run through, I’ve had “joust” about enough Jetboarding to last a lifetime.