Fresh off of Apple Arcade comes 2.5D side-scrolling skateboard action with Skate City, a skateboarding game that brings the relaxed trick system of Olli Olli but mixes in some real world spots for a satisfying skate experience. The runs are short, bite-sized experiences and the art crafts an animated, almost-cell shaded look to realistic animations. With its debut on consoles, the pick up and play short burst action is now brought directly to your living room TV. 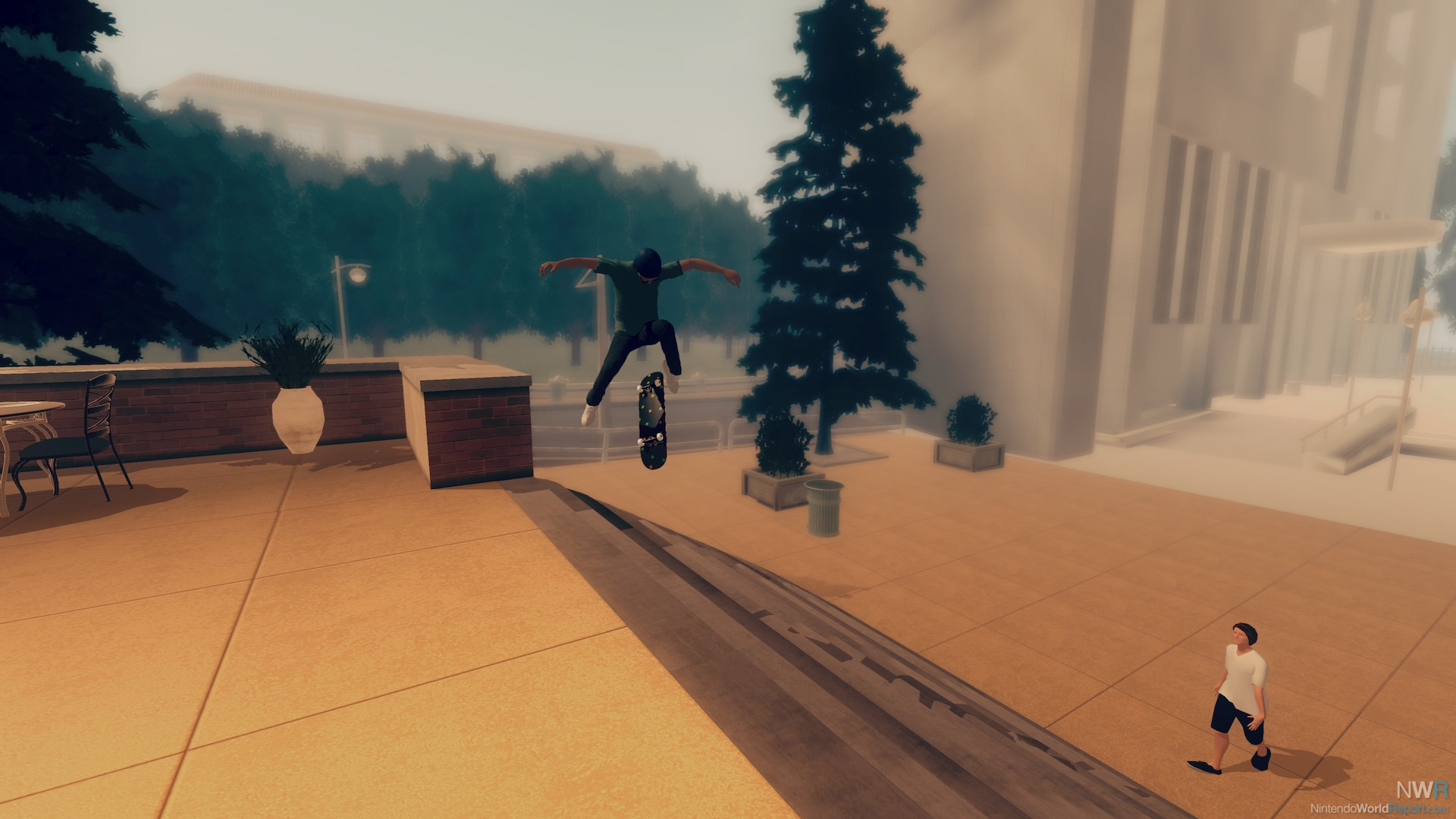 Skate City comes in a pretty simple package. Left stick controls basic tricks. Pointing the stick in any eight directions will result in a trick, and they are listed as you rotate the stick so you aren’t blindly moving it around. The right stick controls “Nollie” tricks, which are down off the nose of the board instead of the tail. Rotating 180 degrees is on the R and L bumpers, while wheelies or “manuals” are on the ZL for regular, and ZR for off the nose. There are other button combinations for special tricks, but those are few in number and need to be earned through the game’s progression system.

While the controls are simple, they are actually kind of genius in their contextual functionality. As you move through the maps, there will be obstacles to skate like stairs or ledges that will appear slightly in the foreground or background. This is where the 2.5D kicks in. These obstacles can be grinded by doing a trick onto them or just ignored entirely. How you grind is based on your positioning. If you do a 180-degree rotation near an object, you will land on the nose or tail of your board in a nose slide or tail slide. As a skateboarder myself, it’s intuitive since that’s how you would get into those tricks anyways: by landing on an obstacle at a 90-degree angle. It makes sense in context. 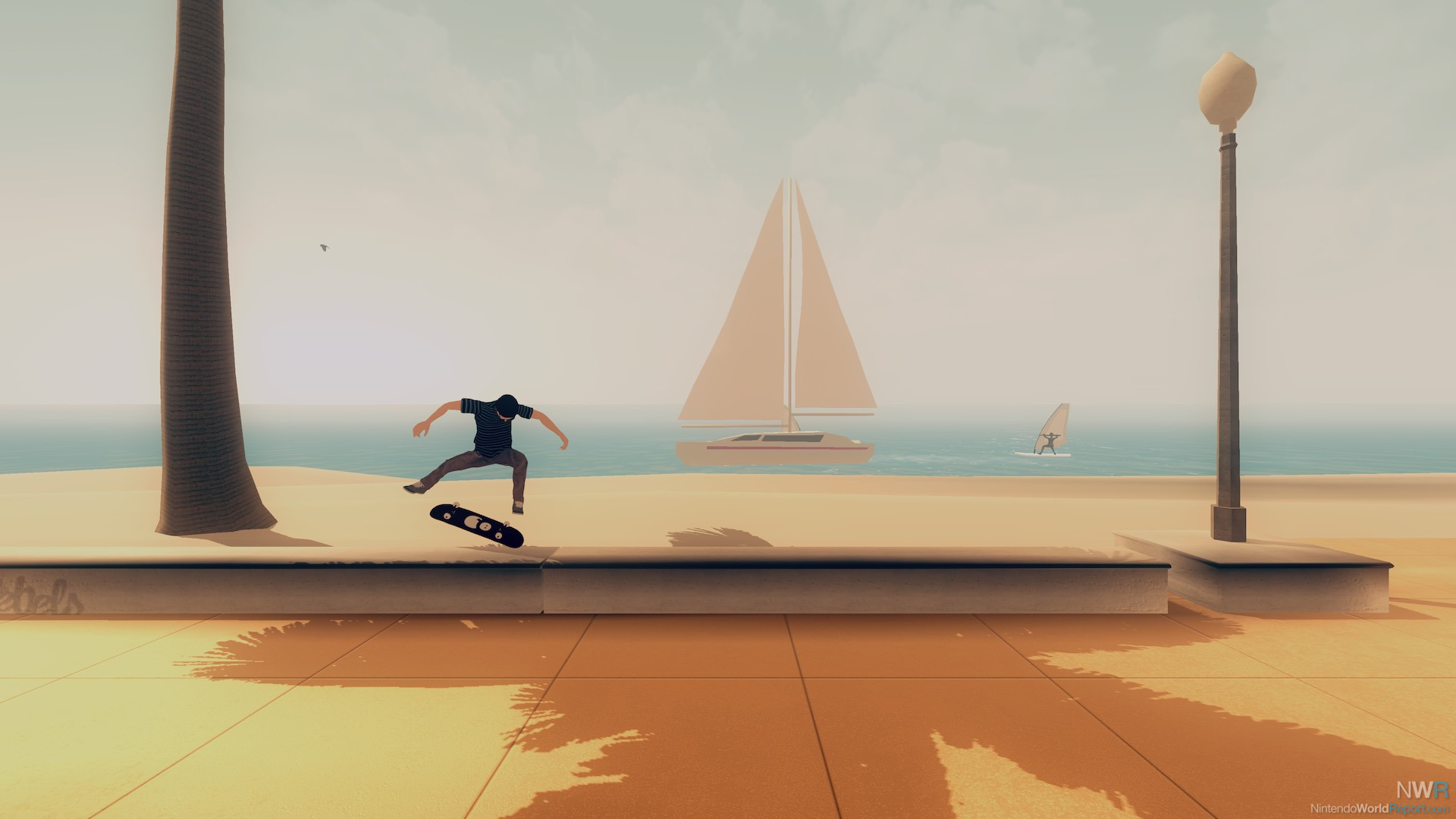 The same goes with landing on an obstacle in a wheelie. If you were to land on a bench with only the nose wheels down, that would be a nosegrind. The manuals and spins play into the grinds as they would in real life. Adding in variations like spins, flips, and button holds for additional grinds, there are lots of tricks in your arsenal to rack up sweet unrealistic or realistic combos. There’s also a balance meter akin to Tony Hawk’s Pro Skater that makes combos require some skill to execute. The balance meter wavers left and right, and the triggers are used to balance in between; otherwise, you'll end up on the floor.

There are three maps to explore: Los Angeles, Oslo, and Barcelona. These three cities are known for being skate mechas in their own rights with dozens of skate spots within the culture. So in each challenge set, you'll find yourself skating the famous MACBA (Museum of Contemporary Art Barcelona) ledges, or the L.A. courthouse without even realizing it. The landmarks are subtle but unmistakable for those with a keen eye. The maps themselves are very wide, with challenges taking place in small chunks of them. There is a free skate mode that lets you skate the entirety of the map from beginning to end and then loop back, with challenges you can do at your leisure. 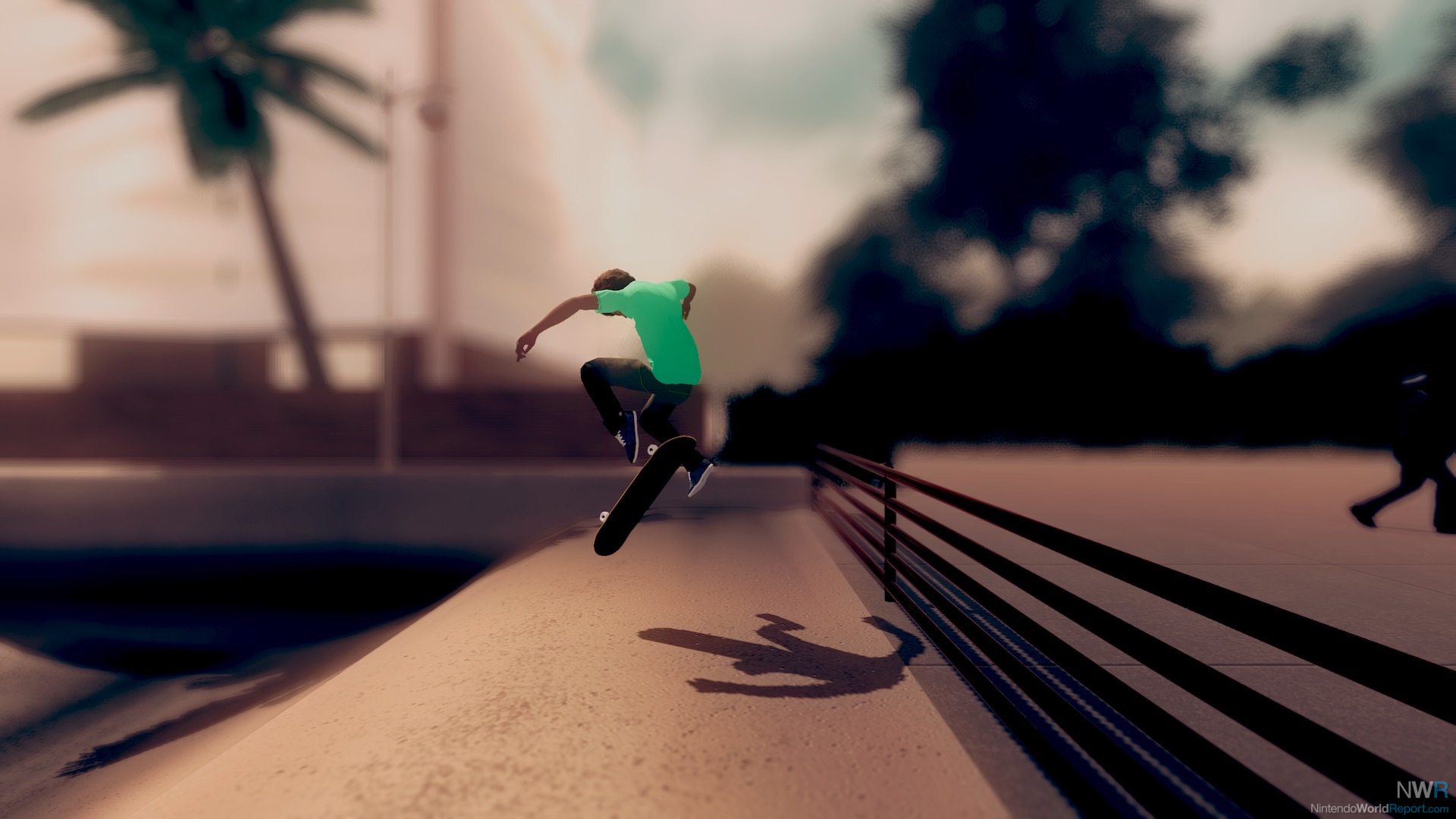 The challenges in the game are diverse, with some being to run from security guards while doing tricks or complete trick requests, races and difficult combo challenges. Every level also comes with some bonus objectives to get 1-3 star ratings on each challenge. These can be both fun and repetitive as they recycle quite frequently in limited map options. By completing these, you are rewarded with skate city currency, which is used to buy stat upgrades, cosmetic gear, and bonus special tricks. The cosmetics are relatively cheap and barely factor into the game as the art style doesn’t give a ton of detail. The stat upgrades are expensive but are necessary to do more advanced combos and maneuvers.

Outside of the basic challenges, Skate City feels pretty limited. There are only three maps, and the challenges reuse the same five or six variations of goals. The gameplay is smooth, and this makes you feel cool landing the tricks, but there is some slow down that definitely ruins the flow at points. There’s a quick restart by pressing up on the D-pad but that was definitely not explained well. The menus for selecting barely highlights options making selections hard to see, which was a minor frustration throughout my time with it. The music, on the other hand, gives the relaxed coffee shop “chill beats to study to” vibe that’s oh-so-attractive. When it’s bedtime and I’m going through an endless free skate session to relax, it definitely puts me into a zen state. 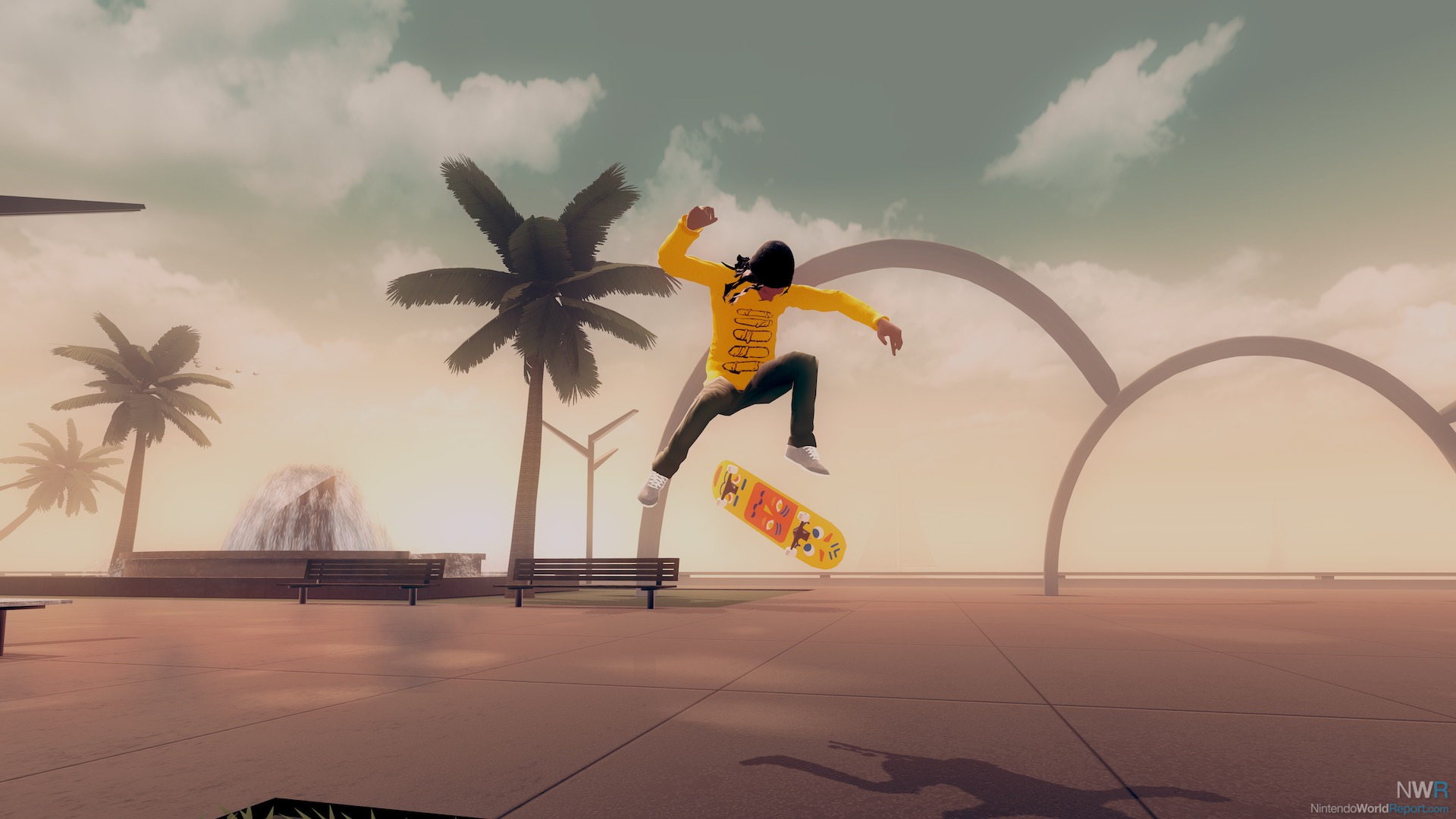 Skate City is a new port coming from Apple Arcade. It’s a laid back, short session skateboarding game with a great style. Unfortunately, it does feel like a mobile game with its simplistic gameplay loop, reused challenges, and few maps. Despite its limitations, I found myself returning over and over again to try to 3-star every challenge long after I maxed out my stats. That’s what Skate City brings to the table. A breezy, no-stress experience that’s addicting for 15-minute intervals. If you are looking for some low pressure coffee shop skateboarding, this is the game for you.