Square, or Square Soft as it was once known, has a storied history with JRPG’s. They have created some of the most pivotal series of the genre that include Final Fantasy, Breath of Fire*, Chrono Trigger - the list can go on and on. The peak of Square’s rule over role playing games came in the 90’s where they released game after game, almost monthly. December 1989, they took a version of their lauded Final Fantasy series and brought them to Game Boy, under the title Final Fantasy Legends. These were turn based like their predecessors, but came with their own set of rules that set them apart. Over the years, the Legends brand became known as the Saga games (the proper moniker in the East.)

The Saga series quickly established a fan base of their own due to the varied character mechanics, intricate progression systems, and detailed world building. In that vein, we have Saga Frontier, released originally in 1997 on the Playstation 1. Sandwiched between Final Fantasy Tactics and Front Mission 2, and entering the hallowed halls of what came before it. The new iteration brought a brightly colored cast of characters, a wide web of contextual interactions and a new “Free Scenario” system that pushed what soon became “open world” games. Now remastered on the Nintendo Switch, it’s been updated for HD and added back previously cut content, characters and scenarios. This is an exciting prospect for people like me who harken back to Square’s hay day with rose colored glasses.

Saga Frontier takes place in a universe called “the regions:” A collection of planets and areas traversed by fast travel spaceships or boats. It’s a vibrant world varying wildly from vampire mystic castles, high stakes casinos and treacherous swamps. It’s a wide open world utilized fantastically within the game’s “Free Scenario” System. This allows for open world interactions with the same characters across multiple scenarios, giving the world a more dynamic feel and letting you tailor the gameplay to your own personal style. 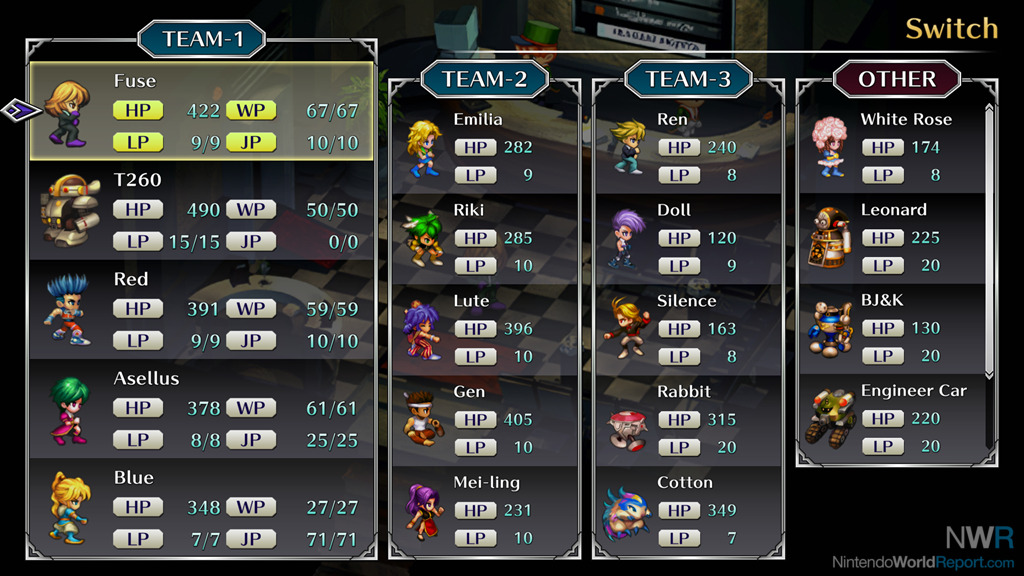 Starting with the main menu, you are able to select up to 7 different scenario storylines following a singular character and their journey. Despite them being separate characters and stories, in any one storyline you can find and interact with the other characters as well as a colorful cast of B-plot characters with their own development and plots. The interactions are unique within each scenario, giving depth to the cast and letting you build your own party however you like. The cross encounter interactions also make the world feel lived in and show the cast existing outside of their own story, something that was missing from Square’s newest offering Octopath Traveler.

Unfortunately, Saga Frontier expects you to play by the rules set back in 1989 from the original Legends games, with little to no explanation. Character progression is tied to race-humans gain stat point boosts based on what they do in combat, while Mecs abilities are based on what gear is installed. Monsters gain abilities and upgrades from eating other monsters, which is randomized to a frustrating degree. Lastly, Mystics absorb enemies into their mystic gear to gain new abilities. If you know, you know. If you don’t, you are left to flail about wondering why your team gets wiped out in a single hit. The combat is turn based and new combat skills are unlocked through repeated use of your already known skills, seemingly at random. These systems are all at play in how you develop your characters and party because there isn’t a traditional leveling system. 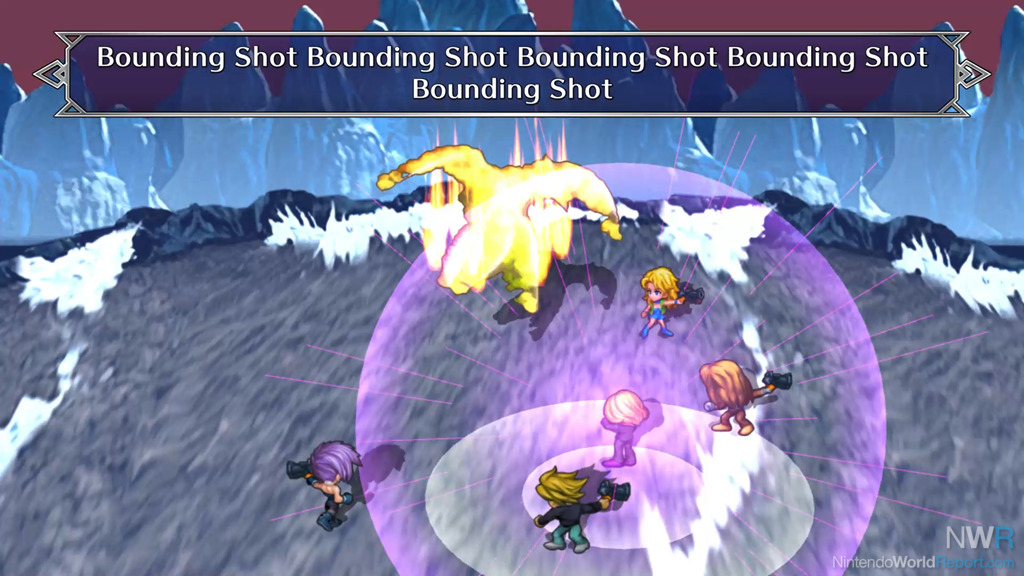 On the back end, enemies level scale as you get more powerful, so grinding battles doesn’t necessarily improve your effectiveness. In fact, there’s a combat encounter number called Battle Rank. The more battles you engage with, the harder the enemies get. It mostly comes down to strategy, building your team properly to handle the encounters in the story. Combat should only be used as a tool. Once a scenario is completed, the character progression rolls over into the next, incentivizing you to really take the time to build your optimal team the way you want. These systems are complex and without a full understanding or strategizing are frustratingly difficult, punishing your every indiscretion. Bosses are quick to use an ability that will single handedly wipe out your whole party, forcing you to lose hours of progression and rethink your team composition.

The separate narratives tell compelling tales of revenge, superheroes, forced sibling rivalry and redemption. Their gameplay boasts the same turn based combat and overlapping locales but with different motivations. The style of gameplay also varies, as some are very narrative focused straight forward affairs, and others completely open-ended with the whole world laid out in front of you. The lack of direction is a real pain point because it expects you to know the world and is so open that it feels aimless. There is a story menu that will direct the player to what they should do next, but the directions are confusingly vague. When time is at a premium, Saga Frontier does not respect yours. 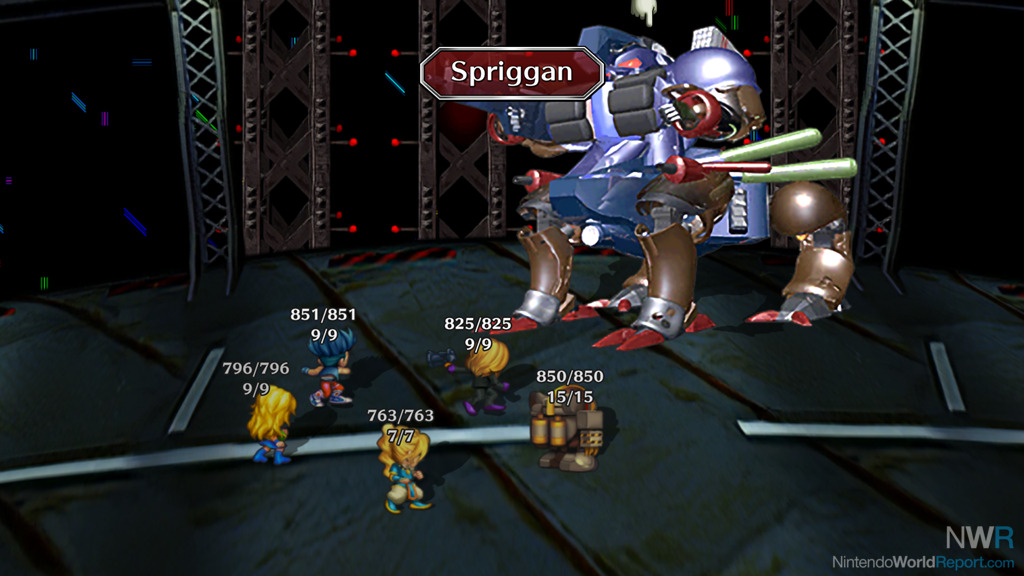 The bonus content are quality of life updates such as a fast forward mode, auto fleeing combat, art gallery mode, auto save and new scenario character Fuse that isn’t unlocked until all other scenarios are completed. The updates are great for softening some of the rougher edges off the original but having the cut content not available from the start feels like a missed opportunity. Fuse appears throughout every other scenario to hilarious writing and dialogue so his narrative is written similarly. Having him locked behind a completion wall disincentivizes it as a feature because less people will get to experience what was originally missing.

Saga Frontier came out at a pivotal time in the JRPG space, attempting to do something never done before. Creating interlocking overlapping narratives within a complex world of mystical magic and technological marvels. Compared to modern day videogames this acts as more of a museum piece, exemplifying when game quality was based on hours of content and less on quality. A time when players would spend hundreds of hours exploring every nook and cranny with little motivation other than “to see what happens.” The lack of direction, confusing combat system and sheer difficulty made me take the rose colored glasses off to a much harsher game. One that refuses to let you play any other way besides the rules set originally in 1989. The story is intriguing with twists and turns throughout. The animation is still top notch and famed composer Kenji Ito’s scores are still awe inspiring but it’s tough to see whether that is enough to want to fully revisit it. It hits different by today’s standards. With Saga Frontier, the developers were asking more if they could, and never asking if they should.

*Correction Square only published the first Breath of Fire