After a year saving bells and filling a museum on an island getaway, fans of Animal Crossing: New Horizons have been patiently waiting for what is to come in another year hopefully filled with content. For those who cannot fathom waiting one more second for said updates, a new challenger is approaching in the form of Cozy Grove from the prolific mobile developer Spry Fox. Following suit in the life-sim genre, this top-down adventure mixes ideas from Animal Crossing, Don’t Starve, and Spiritfarer to create a wholly unique play style that—while missing the mark of Nintendo’s juggernaut property—offers its own charming experience with the spirit world. 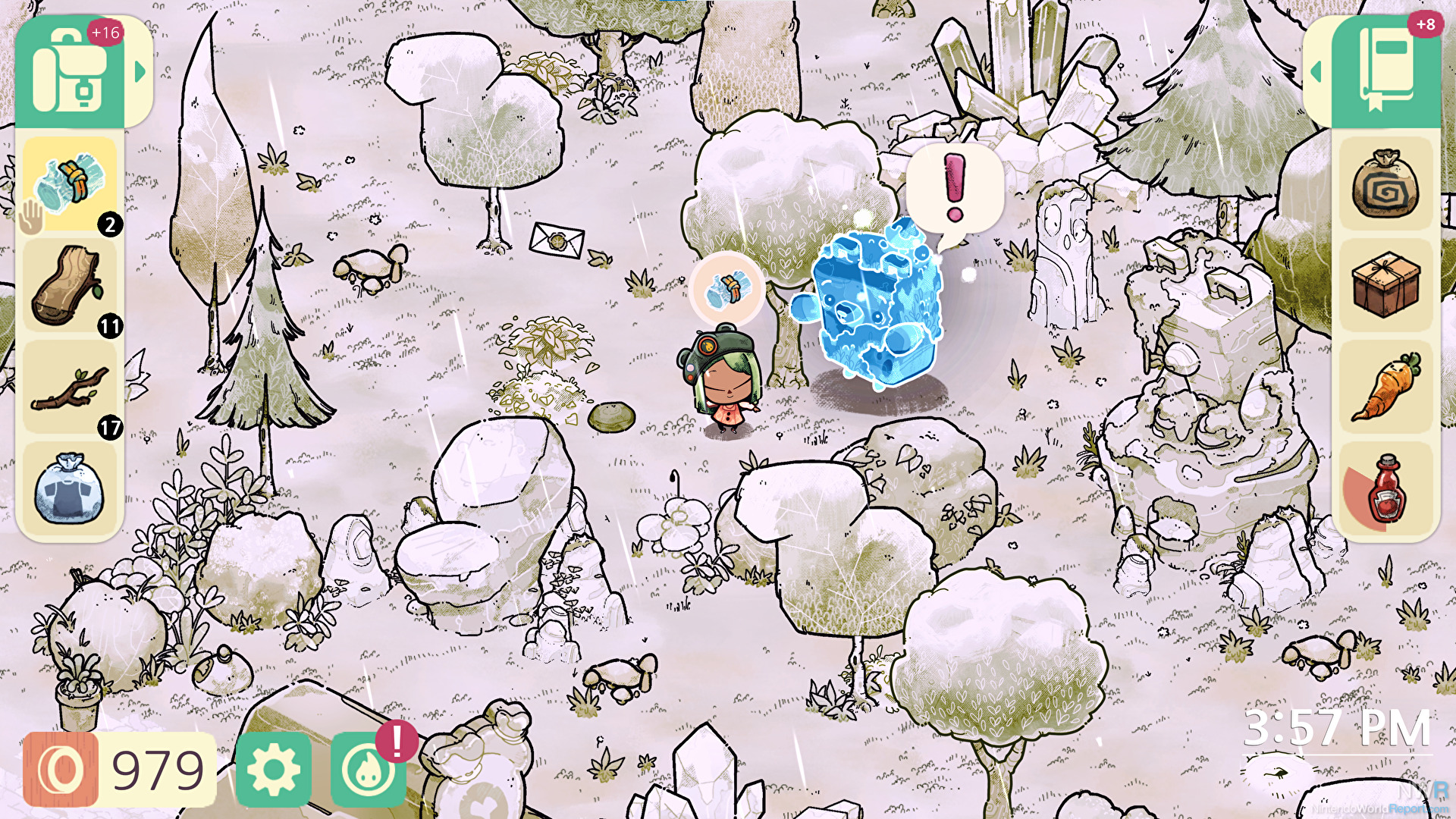 Washing ashore on a mysterious island is a young scout on a journey for their merit badges. This character, known as a Spirit Scout, has a mission to aid the crossing of lost souls into the afterlife, all while learning a trick or two along the way. The island in question is known as Cozy Grove and features beautifully hand-drawn environments with charming inhabitants. The ghostly citizens on this isle are walking, talking bear-folk, each with their own moody tale to uncover over the course of the days and weeks ahead. Each bear had a vocation in the once-bustling town on Cozy Grove, from letter carrier to chef, where with the help of our empathetic Spirit Scout, they may show a glimpse into the true color of Cozy Grove. The stories told by these denizens are the real experience of the game, with each having their own heartwarming path. The charm and coziness ooze throughout the coves and forests, leaving a more-than-positive impression. The only downside to it all is the length of time needed in order to reach these finalities. Even though Cozy Grove is touted as a drop-in, drop-out experience (with the game itself even letting you know when it is time to wait until the next day for more to happen), the daily expectation and amount of time necessary to actually see things come to fruition is hard to push through based on the gameplay offered.

After meeting your home-base firepit (yes, it’s sentient), you’re left to run around the island in search of spirit logs, which the firepit eats, allowing you to expand the island and meet new characters. These are received from the bears in exchange for completing the tasks they ask of you each day. These tasks can be something as simple as catching a certain number of fish or running around looking for colored leaves, to days-long gathering and crafting of items, but regardless, this is the main portion of what each day will bring. In between, fishing, crafting, collecting, and decorating are available, much like what you would expect in Animal Crossing, just in a slightly smaller package. Rather than gifting fossils and paintings to an inquisitive owl’s museum, you show items off to a stoic seagull-bear who is on a quest to see one of every available item... for some reason. Fishing is somewhat easier, with regular fish attracted to your lure just by being in the vicinity, and the list of craftable items is not nearly as jaw-dropping. Even so, it’s obvious that the main inspiration for Cozy Grove’s day-to-day aspects comes from Animal Crossing. The art style and crafting may be closer to Don’t Starve, and the fact that an actual story takes place allows Cozy Grove to one-up Animal Crossing in that respect, but clearly, this is meant to be that mobile experience Spry Fox are known for. That isn’t a slight; it’s just that you’re truly meant to simply spend a few minutes with it each day. 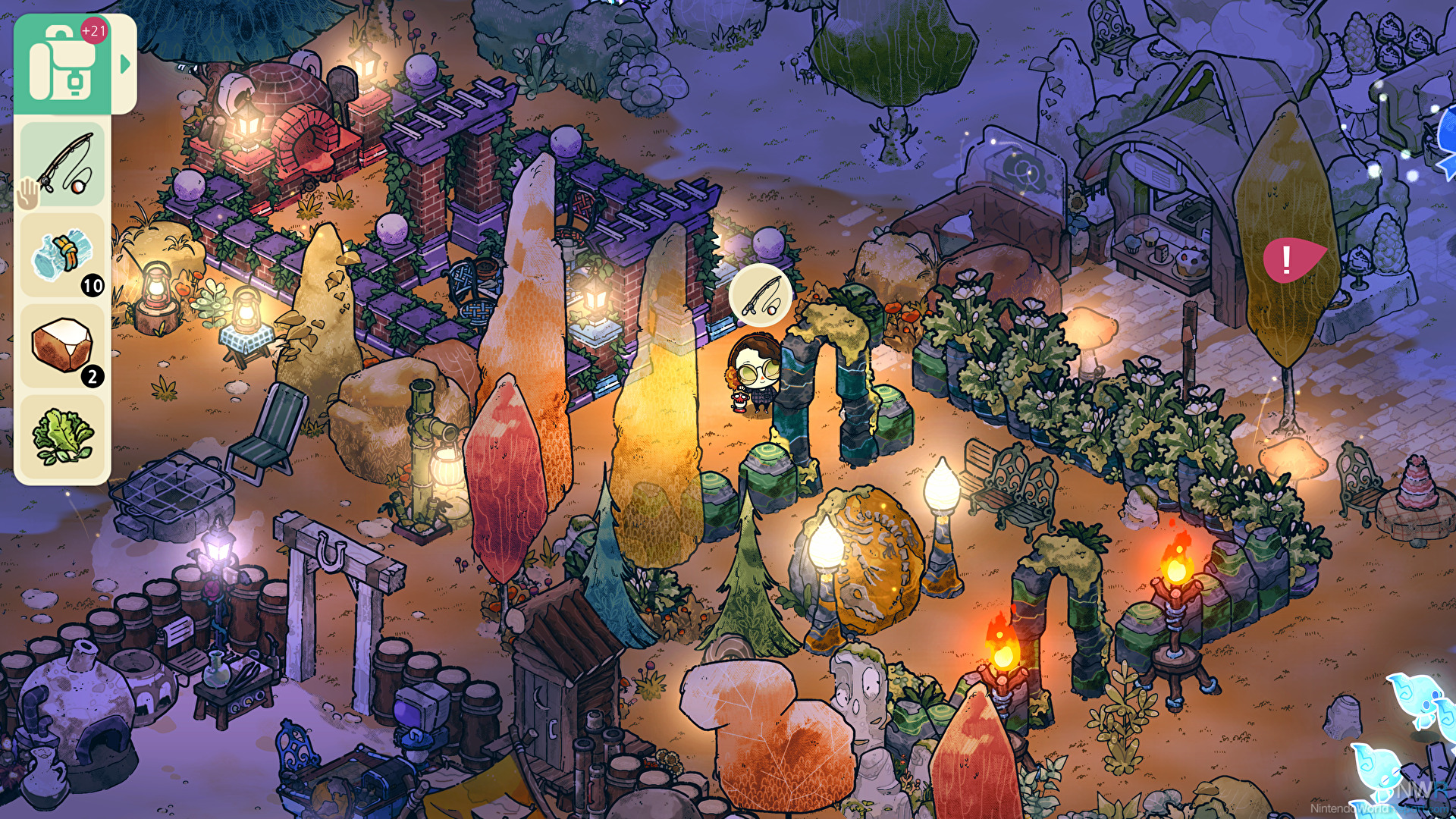 Where disappointment can arise is when you try to enter Cozy Grove after spending a little too time much on Animal Crossing: New Horizons. The hundreds of hours that can be spent totally customizing your island and filling it with all your decorations is something that is lost on Cozy Grove, even if you can decorate the island with a small set of items. Those long playtimes grinding bells and materials, where events come and go asking for hours of your time, are something that Cozy Grove is actively trying to avoid. Playing Cozy Grove for a few hours isn’t going to be that interesting of an experience, as the island is quite small, and progress is purposefully stalled to make it last longer. While that means it values your time as the player, it also seems to look down upon your dedication to really dig into what is available to you on this island. Never has a game of this style had me feeling so conflicted as to whether I enjoyed my time with it, simply because I am the type of person who needs to jump into the deep end; thus, the restriction left me feeling cold towards the experience. While the payoff can be momentous when you reach each character’s storyline conclusion or finally find that last fish you’ve been searching for, the voyage there is too often gated and spread out far beyond its means, taking in-game weeks to reach a single character’s full tale. Since Cozy Grove doesn’t focus on a calendar of events, this seems like the logical way to pad out the experience. However, you’re just left waiting on the edge of your seat. The bottom line is that, while immensely similar, Cozy Grove and Animal Crossing hit differently. Both give you daunting tasks, tons of hours of content, and a daily drive, but each has a different way to keep you around for those play sessions.

The greater issue comes in with the Switch port, specifically, which has some pretty serious problems. A patch is being released ahead of the launch that plans to fix most of what I experienced, but for now, the frame rates regularly dip and stutter when moving around the island and load times are absurdly long. Cozy Grove is difficult to get through as of now, and for those interested who also have Apple Arcade, it is also available there, but here’s to hoping the Switch issues are alleviated as the developers intend.

Cozy Grove arrives as advertised—a smaller, more story-based Animal Crossing experience with its own charms and enjoyment. Though the tasks are also just as tedious at times, the fact that Cozy Grove holds back story entries through their daily cycle, rather than fish and bugs, tastes sour at times, even if the rest of what is on offer is a bountiful harvest. For those Animal Crossing fans out there looking for something close to what you’ve already experienced with New Horizons, this is the perfect drop-in-drop-out version of that experience and is definitely a must-try title, even with the hard feelings over how long it takes to really get to know that seagull-bear.