Nippon Ichi Software or NIS is a team of veteran game makers who love giving us RPGs. Their output runs the gamut from tactics strategy battlers like the Disgaea series to questionable fanservice dungeon crawlers like Dungeon Travelers and Demon’s Gaze that have enough scant of the clad to make you shout “I FOUND THE HENTAI!!” However, it isn’t all just Pretties and Prinnies at NIS. In their most recent release, NIS is giving us a couple of straight-laced releases as a two for one offering on Nintendo Switch: Saviors of Sapphire Wings and Stranger of Sword City Revisited, with the former being the main feature. Having never played either title before, I had to see if there was a specific order in which to approach them or if they were even related, the answers are no, and kind of. Since there is a lot to cover with two games in hand, this will be more of a general overview review that I will try to keep as spoiler free as possible.

Starting with the main course, Saviors of Sapphire Wings was originally released in 2019 as a Japan-only game called Blue-Winged Chevalier for the PSVita. From the outset, you are placed in the midst of an endgame situation in the enemy’s citadel. It's the scattered remains of your team versus the ultimate demon creature that is about to end the world as we know it. You get your first taste of the turn-based battle goodness here, and after the scenario plays out, you are sent to a “build your character” screen where you can change the look of your character and allocate stats and skills. If you have played any of the Wizardry series games, the character building scheme will feel familiar. Once you have crafted your avatar, you awaken in a field and are thrust into a tutorial battle. The game is pretty standard RPG fare; you are introduced to your fighting options, like attack, defend, skill, spell, item, or run. Afterward the character build, the story progresses to a local town, and here is where the plot picks up and off you go into a valley full of goblins. 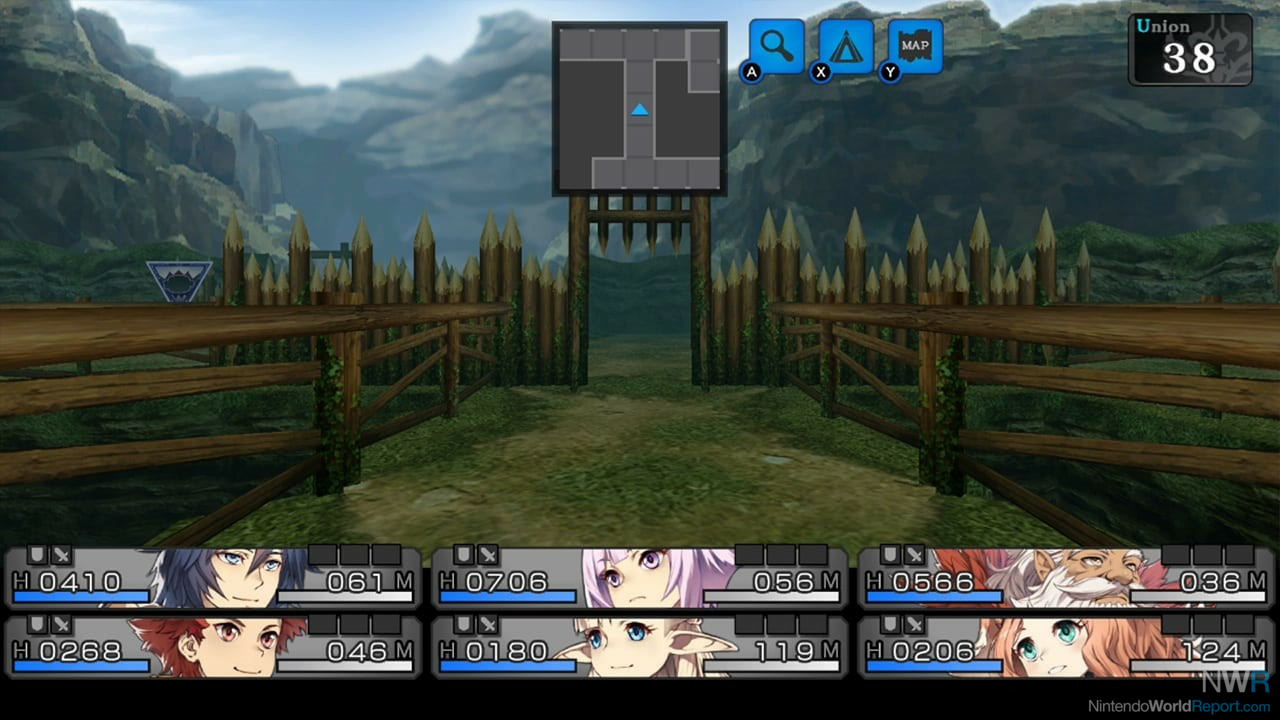 The game is a dungeon crawler to the max, set in a fantasy Wizards-and-Warriors-type world with anime- based character models. Through a first-person view, the player moves through a maze full of random encounters with monster art that would look at home on a Magic the Gathering card. If you have forgotten your dungeon crawler 101, in an enemy encounter, battles have multiple planes: a front row and back row for each party. A mage can cast spells hitting almost anyone in battle but a knight can’t swing his sword from the back row nor attack monsters that are in the back row of an enemy team unless they have a long range weapon like a spear. As a battle progresses, monsters will shift planes between turns which can require a change in strategy. When it comes to getting around, automapping is a nice feature to have as you trundle your way through the ever-bewildering areas and even nicer is the automove feature, select a point on the map and your party will move there automatically, if you have been there already. This is a very handy tool for when you get turned around and confused as to where you are headed. Also you can save the game anywhere, so save and save often or you may regret it!

As you add party members, there will be opportunities in a conversation to build your relationship with your team, similar to the Persona series. A stronger relationship yields better bonuses and faster EXP growth for your party members. Most of the battles are random except for specific areas that mark encounters on a map (like a boss fight or lured monster). Each monster you run across has some sort of elemental weakness to exploit in the turn based battle. As the story progresses, more characters join your team, and each person has their own motivation for shacking up with your party but the prize in everyone's eyes is to end the clash between good and evil and save the world, thus fulfilling destiny. 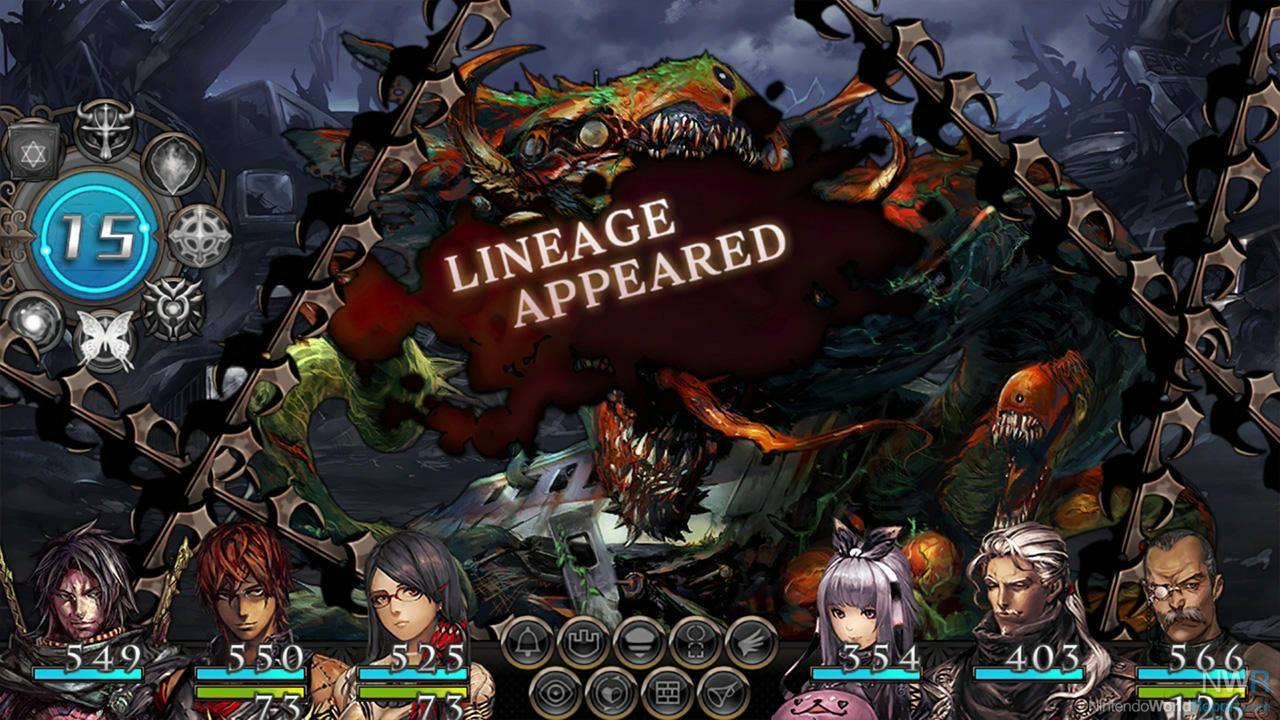 The dialogue between characters is written decently well and the interactions come naturally as events take place, but you can also summon party members to your chambers to have a chat. The chat function is especially useful when a person has low morale. A Person's morale drops when they die in battle or are constantly sitting around with low health, low morale affects performance and how well they execute their battle instructions, so there is some upkeep of the characters to be done during the game. Saviors of the Sapphire Wings is a great headliner here in a genre that tends to be low volume. It stands out in presentation and is a great example of a first-person dungeon crawler that isn’t overly represented on the Nintendo Switch.

The second course of the RPG meal is Stranger of Sword City Revisited, a game that was already localized on Xbox One in 2016 and another first-person dungeon crawler in the same vein as Saviors of Sapphire Wings. Just like Saviors, Strangers has you build your character by choosing race, job class, and perks. Sorting through the avatar choices, I saw modern design avatars with headphones and contemporary clothes, but as you scroll on through you get more samurai fantasy type models and eventually some of the same character designs that were an option in the previous game. This made me do a bit of a double-take. Once you finish your character build, the story begins. As the lone survivor of a plane crash, you awake in a dusty dungeon where you are greeted by an old wizard. You make your way out of a maze to be confronted by a demonic creature among the wreckage of your plane and are introduced to a secondary female hero clad in a japanese high school uniform with armored up limbs who saves you from the jaws of death. After a series of random encounter battles, you are guided to a town that resembles a post-apocalyptic set piece from Shin Megami Tensei. Speaking of which, the random monsters you encounter are straight from Saviors of Sapphire Wings. These two RPGs are as connected as Shin Megami Tensei is to the Persona and Devil Summoner series. Lots of common elements (such as spell and monster design) connect with stories set in a different time and place, and then completely unrelated characters for some new flavor. As such, these games can be played in any order. 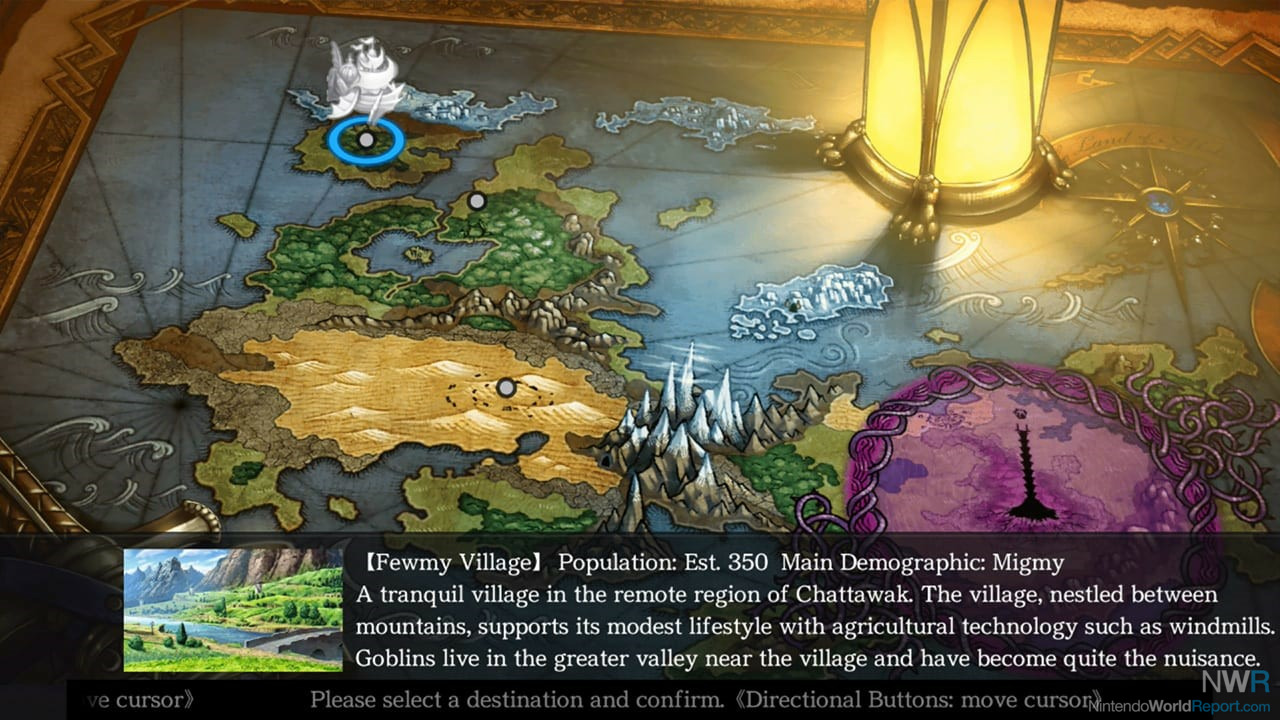 So for comparison, the art style in Stranger is a little bit less cell-shaded anime and more hand-painted anime. The backgrounds and settings feel more solid and contemporary versus the hand-drawn medieval setting of Saviors, but that's not where the deviations stop. In Stranger of Sword City, there is a recovery system that incorporates a character's age. If a person is injured or fallen, they are hospitalized and must be removed from your party, with younger party members recovering faster than older ones. In Saviors, as soon as you exit a maze, your party is recovered. In Stranger, you can create your party members in addition to the six or so that are in the character pool of varying job classes. In Saviors, you obtain party members organically through the story, although you can modify them for race and job as they join.

The combat UI and presentation vary between the two titles as well. Stranger of Sword City fills the screen with your party members against the colorful environment backdrops and painstakingly detailed enemies. Saviors has similar, if not as grand, backgrounds that put your characters faces in the HP/MP containers at the bottom while featuring the same cast of enemies, albeit drawn a little differently. The menu system has some depth to it, yet is learnable in Saviors, but it's a mess in Stranger. They tried to make it look beautiful and intricate but ended up making it difficult to navigate. Then there is the added challenge factor of only being able to save in designated places in Stranger. The games also incorporate different dungeon action schemes. In Saviors, you can set bait for monsters, leave and come back to a battle that yields a chest. In Stranger, there is a hide and ambush mechanic that also yields treasure chests. Both encounters work similarly, though. There is a leader enemy who, if not defeated in a set number of turns, will abscond with the chest and leave you with nothing. One more thing, the automap and autotravel feature from Saviors is in Stranger as well.

Both games feature rich orchestral and piano-laden soundtracks that set the mood for spell-casting, sword-swinging heroics. They also feature mostly the same sound effects pool and on-screen attack effects. Spoken audio for both games is Japanese only with English text, but the voice acting is clear and convincing. Both games also feature a home base that acts mostly as a quest hub for main and side quests and a place to buy, sell and otherwise organize your storage.

These two games are obviously cut from the same cloth, but that's not a bad thing; combining them makes sense. You are getting two solid dungeon crawlers in a neat package, and each title plays just differently enough to keep it interesting. Both have their strengths and weaknesses, and as such, my gripes are different for each. Saviors of Sapphire Wings needs to be a little more clear about how to complete the side quests as the clear conditions can be a little ambiguous. Stranger of Sword City Revisited makes you manually level up your characters when they reach the required experience. If you don't, they will sit at the same level until you do something about it in the character menu, and the game doesn't remind you. Also in the fast-paced world of MMOs, MOBAs, and survival shooters, this game will feel extremely slow for some. Minor nit picks aside, I highly recommend this RPG combo for any dungeon crawler aficionado and its price tag isn’t a major ask for a pair of RPGs that will consume 50 to 60 hours a piece. Although certainly not for the casual gamer, this NIS-published duo has very nearly hit the mark for its target audience. So rejoice NIS faithful, for Saviors and Strangers is here to roll for bonus stats and take names, and it's brought its 20-sided die.