Repeatedly stymied by The Incredible Bulk, and his wagon wheel hands.

The world is shrouded in a fog that turns people to monsters. The only safe place is a floating castle that once served as a refuge for the elite, but has now become more of a prison. The architect of this prison, the tyrant Ivor, has amassed both tremendous power and cunning enemies. Foremost among them is Lucien, a nobleman recently appointed to the castle’s ultimately powerless “council,” who now plots to kill Ivor. His ally is Rowena, the ghost of Ivor’s recently-executed lieutenant. Her hatred for her former boss, and fear for her son’s safety, kept her spirit bound to this cursed world. While Lucien plots, recruits allies, and engages in subterfuge to weaken Ivor, Rowena commands the loyalties of the spirits of long-dead heroes to campaign against Ivor’s forces and dispatch the damned on the ground. 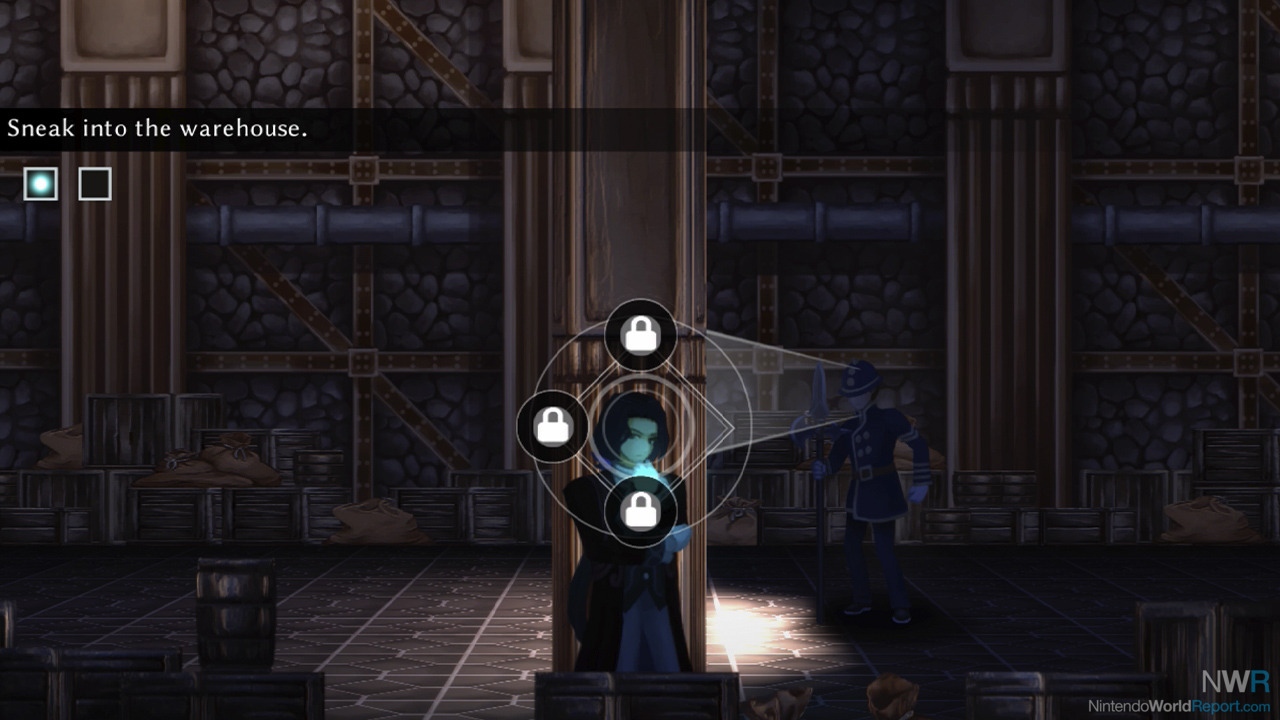 Lucien and Rowena each represent one half of the game’s gameplay. As Lucien, you skulk about the castle, complete tasks, search for hidden items, and politic your fellow residents in an effort to get a leg-up on Ivor and his allies. It involves a lot of text prompts mapped to the face buttons and sneaking missions where Lucien hides behind pillars. These actions can cause branching paths in the story, but ultimately they’re not especially engaging. They’re simple compared to games playing with similar ideas, and they often drag, even when they have a timer attached to them.

Rowena is tasked with fighting. Stages are essentially long hallways that are broken up with enemy encounters. Rowena and her party of warrior-ghosts, known as Exemplars, are on a 2D grid. Each of her three Exemplars are mapped to a face button, and her actions are mapped to the fourth. Pressing a button will send that Exemplar out to attack the enemies, who are similarly arranged on their own grid. There are special attacks, various cooldown meters, timed blocking, “perfect” deflections, elemental types, and other similar trappings of an RPG combat system mapped to this apparently-simple format. Many of these stages end with boss encounters, large enemies who possess a number of skills that demand using all of the above features in unison. 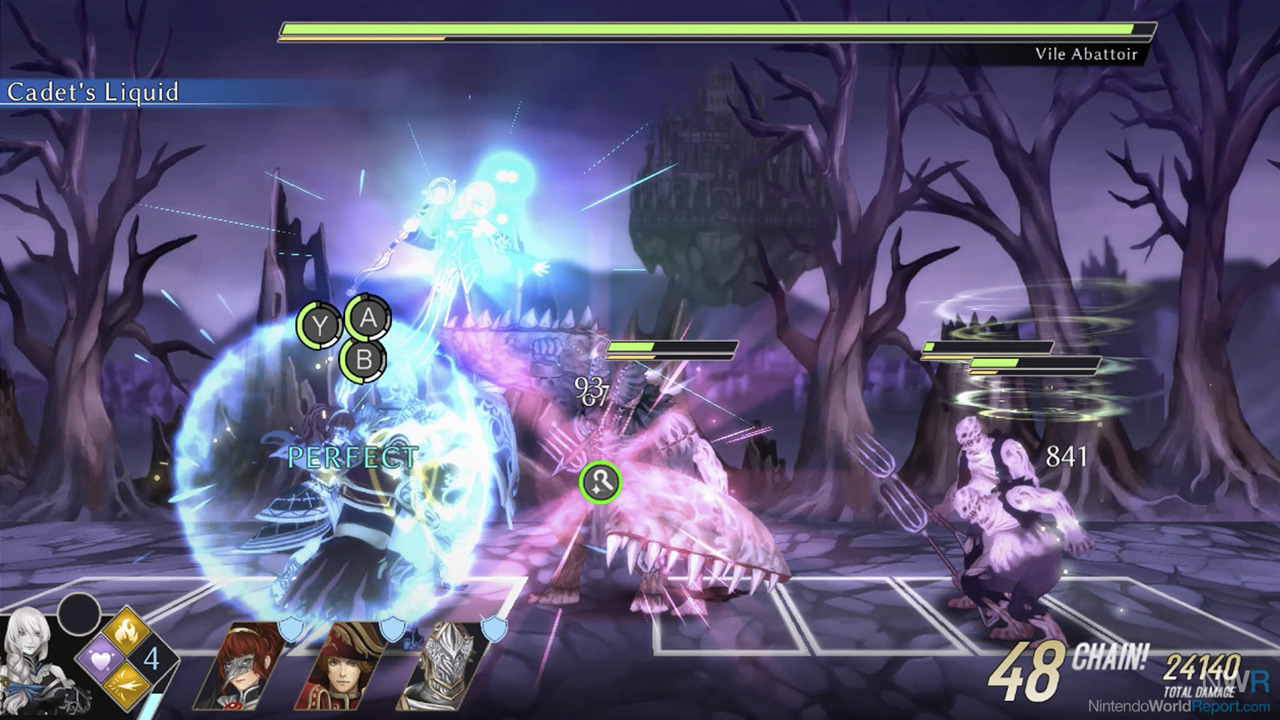 Welcome to chaos, population: this image.

There’s an overwhelming sense that something is wrong in many of these boss encounters. Maybe it's a damage setting that’s entirely too high, or a damage sponge of a boss that seems to be largely impervious until you stun them. Perhaps it’s a stun window that lasts for less than two seconds despite taking a while to trigger, or a healing spell that just seems to work worse during this boss. Perhaps its area of effect attacks are too fast, or too powerful, or can be spammed or combined with other spells that completely remove survival from your possible outcomes. The problem? In some cases it’s all of the above.

The first such boss to give me a sense that the game wasn’t playing fair was a purple giant with wagon wheels for hands. The questionable looking sprite was only the smallest of his issues. He only took any meaningful damage during his comically short stun window, but he hit like a wrecking ball. The only hope of even staying alive is to constantly parry him while also avoiding the powerful spells he throws out at ever increasing speeds. I can’t guess how many times I had to fight him before I got past him, but at one point I reached out to The Thirsty Mage’s David Lloyd, who was also mid-review, only to find that he was similarly stuck on the same boss.

This is not some late-game boss; this was Chapter 2. When I finally did clear him, I was given a story option: leave a helpless young girl we had been escorting with her clearly-evil parents or take her with us. The “take” option resulted in a jokey end-game scenario, and my vanquishing of this gnarly foe was completely disregarded when I reloaded my save. I had to rerun the nine and a half minute stage yet again, struggle against him two or three more times, before finally getting through. Except the game crashed, and so another run was lost. I did get through him eventually, but at that point the game had found so many ways to frustrate and annoy me that I really didn’t want to see what was next. I dutifully proceeded, but at that point me and Fallen Legion Revenants were on the outs. A few more boss encounters later and I knew I was done.

It’s not just unnecessarily punitive boss fights that hamper the fun. The storytelling isn’t compelling. Most of it is done via Lucien’s adventure game-style sequences mid-mission, and they just feel like a drag. Some are timed, but even when timing is tight they still feel like they take too long. This would be less pressing if they weren’t removing you from Rowena’s gameplay to do it, but to have them happen concurrently with the combat gameplay feels disjointed, and honestly punitive: if you need to change your Exemplar configuration you’re going to have to replay the same tedious sneaking mission. Due to a somewhat confusing message prompt, I reverted my save and ended up replaying Chapter 1 again, and so I can confirm that the choices you make do have impact, but I can’t exactly tell you how my actions on my second pass saved Evie’s life. I mostly just picked what I didn’t pick last time. Beyond that, the scenario isn’t introduced in a way that makes it particularly interesting, and the characters themselves are boring.

Visually, I don’t find the game to be much to look at. The art is detailed, and drawn by a skilled hand, but it is lacking in color and the character designs aren’t particularly appealing. This is doubly true for many of the bosses, who don’t look grotesque, but rather just weird. Given the game’s fairly limited “hallway” world, it would have been much better for it to look more captivating. 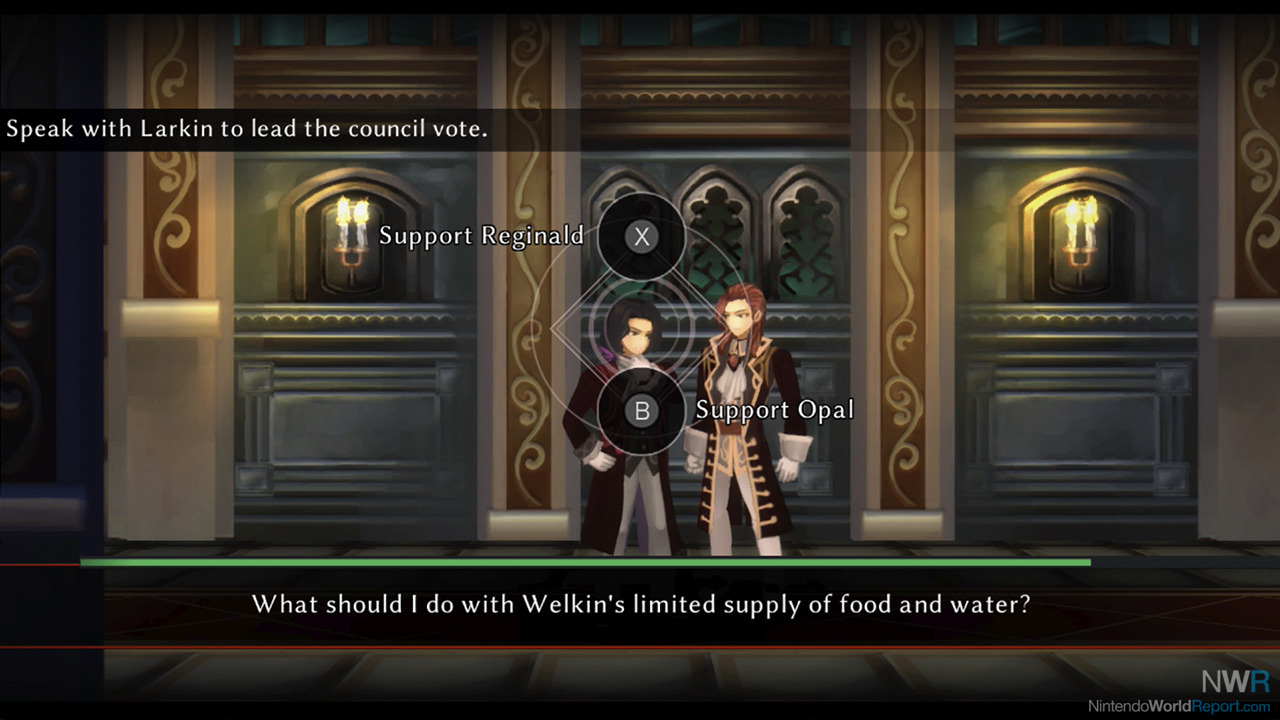 How to take down a dictator, step one.

I wanted to like Fallen Legion Revenants. Rise to Glory is a really good game that was let down by some technical issues. It kept me up late, kept me engaged enough to play it again after the review process, and gave me great hope when Revenants was announced. However, while the addition of Lucien’s adventure game-inspired gameplay breaks up what is, admittedly, a somewhat repetitious combat gameplay, it just isn’t fun. Fallen Legion: Rise to Glory had its share of boss encounters that seemed unbalanced, but I never felt as frustrated as I did with Revenants. I found myself much less interested in the characters or plot of Fallen Legion Revenants, and it’s probably safe to just say I liked everything about this game less than its predecessor. I’m honestly disappointed. If developers YummyYummyTummy announce another Fallen Legion title, I promise they’ll get my attention, but I’m going to have to wait a little longer this time before I let myself get excited.

The sting of disappointment :(