The opening menu of Gonner2 says “press jump to die.” This sets the tone for a tough-as-nails 2D roguelike platformer/shooter. In a world of procedurally generated shooters, this is a stand-out choice in both visuals and fast-paced action. With a lack of explanation on rules, story, or mechanics, this game is all about trial and error. 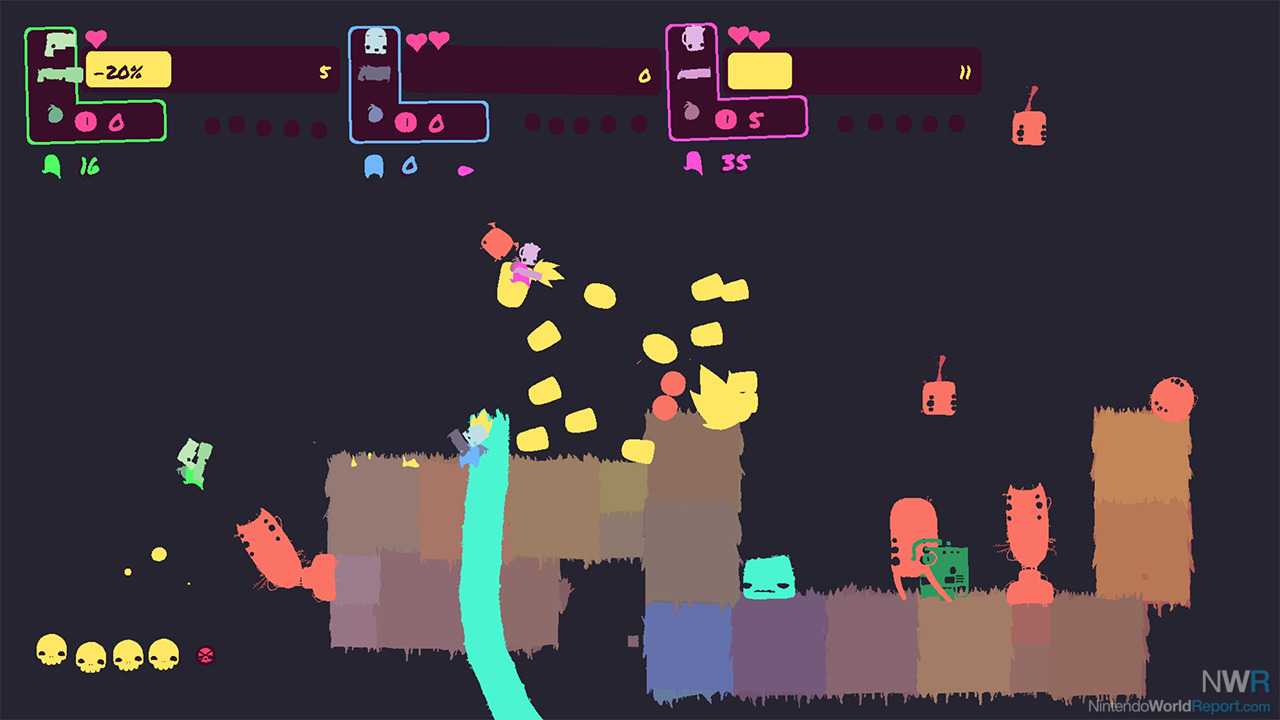 The story follows the hero Ikk, a living water droplet tasked with helping Death rid her land of evil creatures that have started to invade. This was all explained via the game’s website and marketing materials and less so in the game, which keeps context, story and gameplay vague for the player to suss out. This includes non-verbal emotes and occasional bits of lore strewn about. The game keeps this all close to the chest.

Not much is out there that looks like Gonner2 in action. Ikk is a blob of a character that has a skull, rifle, and backpack. When moving forward through the world, the floors and ceilings fill in with patch work design scraps reminiscent of construction paper. The world builds around you and deconstructs when you leave it, which acts as both an eerie style choice and hard to decipher what the level actually looks like until you engage with it. This was not a feature I particularly loved. The papercraft animation still stands out as something worth admiring in action. The sound design is another stand out with quiet pitched insidious tones in some cases and punctuating action with carnival-style echo beats when the action picks up. There’s a definite gothic style to the game and I am here for it. 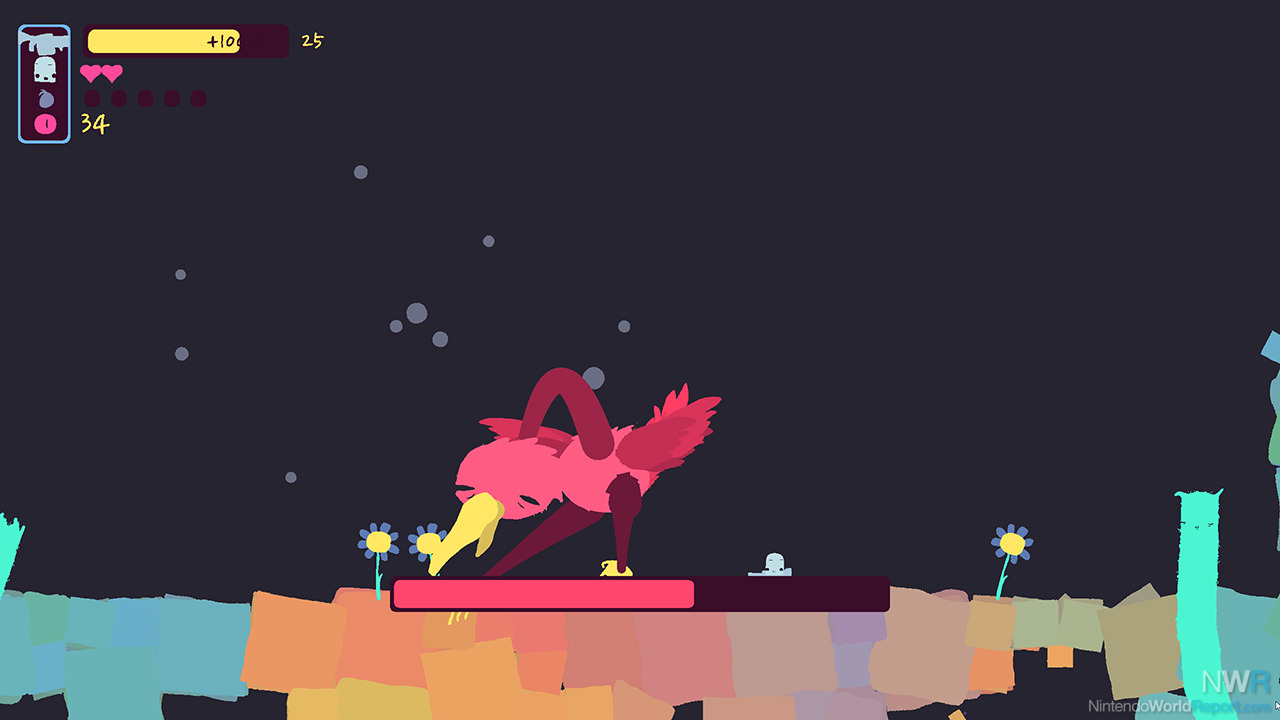 Otherwise, multidirectional shooting against blobs of enemies is the name of the game. Chaotic flying creatures fill the screen while brightly colored snails and octopi attack from all angles. Getting hit dwindles your heart meter and the parts you’ve amassed are lost to the ground. You must recollect your skull, backpack, and weapon as the blob or die instantly. Collecting some and not others will result in varying degrees of difficulty, specifically if you don't recollect your skull, then any hit is a one hit kill. There are upgrades to each with different variations like triple jumps and abilities that can change up gameplay quite a bit.

Finding and deciphering what these abilities are takes time as the levels are procedurally generated and the abilities are not consistent with each run. The persistent unlocks come in with discovering new skulls, backpacks, or weapons that once found in a run become usable from the beginning hub. That at least provides consistency when finding a loadout you like; you can stick with it and you will need it. Run after run, I found my game style changing from fast paced to careful and strategic with varying weapons and levels. You can choose the boss of the area you are going to but the levels vary with the beginning and end signaled by a world serpent that eats you and spits you out in the next level. The bosses are giant nightmare creatures that bring bullet hell chaos fuel or meticulous platforming challenges. 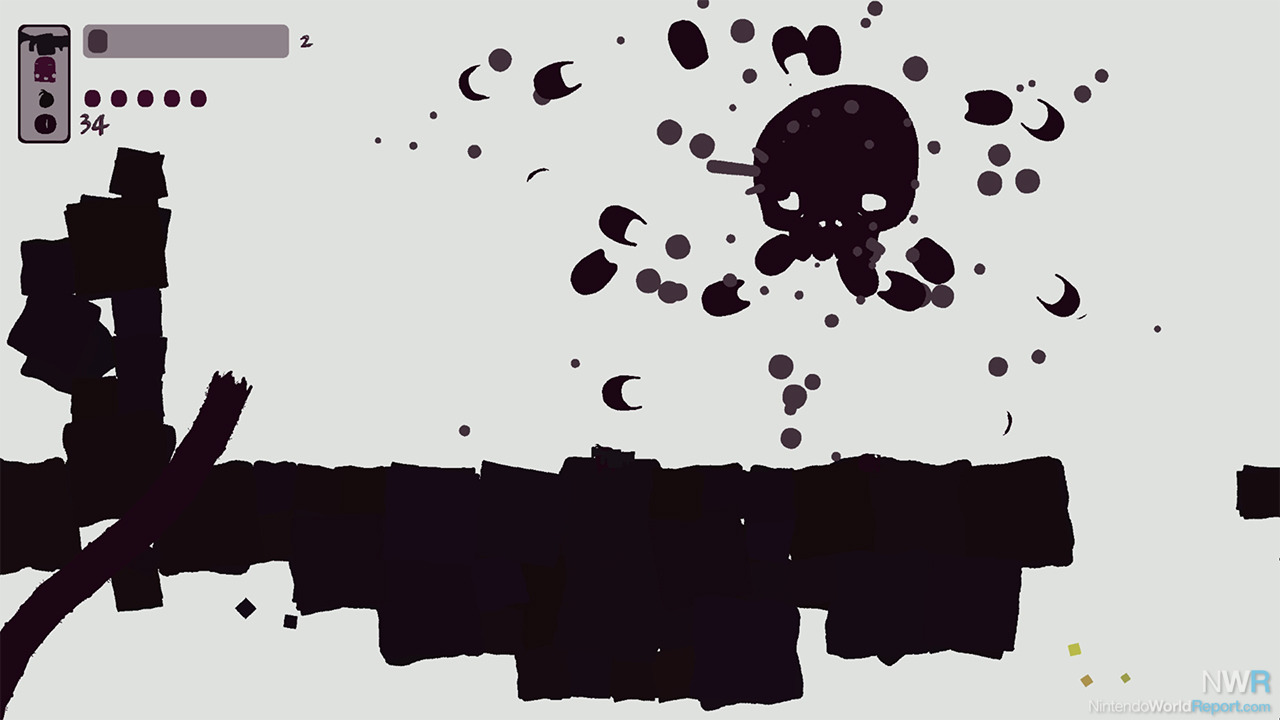 One key addition to the Gonner series is multiplayer where now friends can join in on the chaos the world of the dead brings to Ikk. The game plays the same but with two players it can seem even more hectic but equally as fun. Adding a second player is definitely a benefit here as it gives a second to breathe if one person dies. I feel that this is the ideal playing scenario and lowers the difficulty level to a manageable pace while upping the zanniness.

“Press Jump to Die” perfectly describes the difficulty posed in Gonner2. It’s a brutal unapologetic platformer roguelike that shows its style at all angles. In the character design, unnerving minimalist soundtrack, and world building there’s something special here. The game does a lot with a little and in the end it’s tricky to decipher what. That’s just up to you to “press jump.”