A chaotic shoot-'em-up that tries to be both a hardcore single-player game and a goofy multiplayer one.

In twin-stick shooter Swimsanity, a team of skilled underwater divers (called Moobas) fight for survival after being dropped into a dangerous aquatic world. Armed with an arsenal of weapons and power-ups, divers blast their way through countless waves of deadly sea creatures and hazardous obstacles. I found the controls to be fairly easy to learn and understand. Players swim with the left analog stick, aim with the right one and fire with the ‘ZR’ trigger. As Moobas navigate murky waters, they can pick up power-ups and upgrades such as health pickups, bombs and speed boosts. As you strike damage against enemies, your power meter slowly fills up, earning you the ability to “unleash” a special move against opponents. 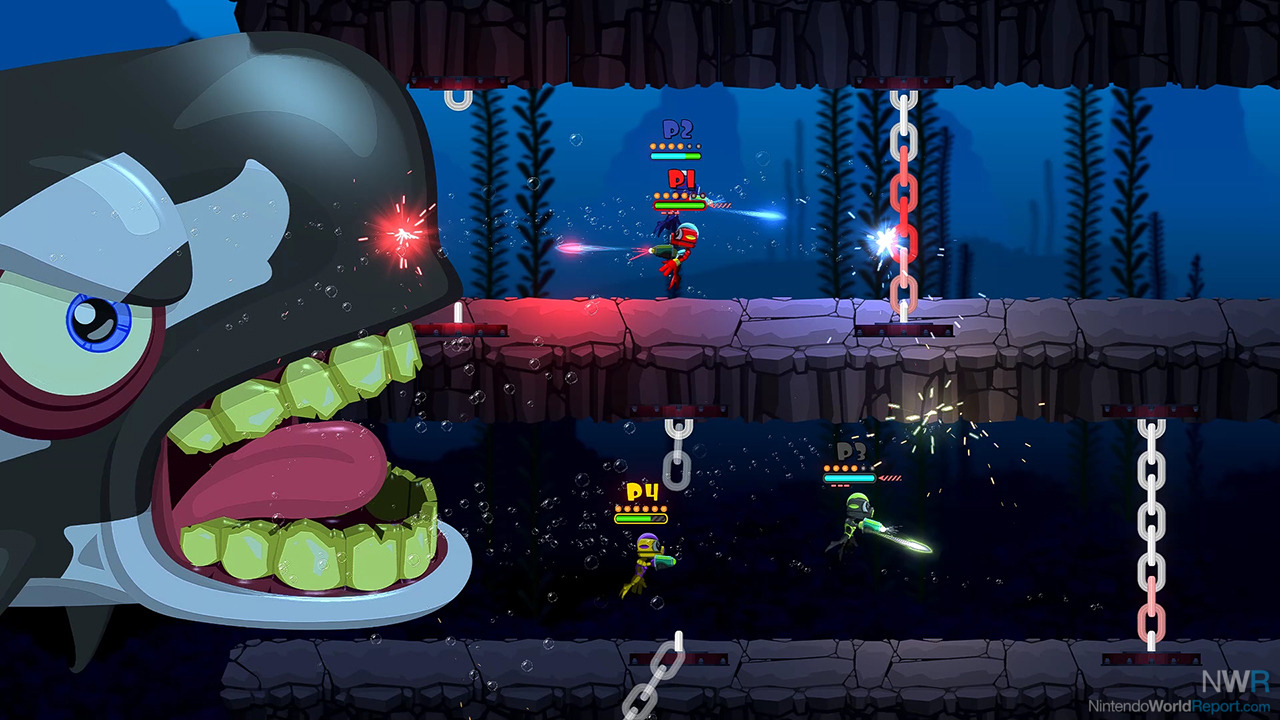 Art direction feels reminiscent of old Flash games published in the early 2000s. The visuals have a low-budget, vector-based art style characterized by flat colors and no outlines. Instead of traditional frame-by-frame animations, they are created “puppet-style” with motion-tweens like a Flash cartoon. The art direction could possibly be traced back to when this game’s concept began as a senior school project in Flash way back in 2008. On a more positive note, the clean, simplistic visuals make levels more easily readable, thus making it easier to follow the chaotic action as it unfolds. I appreciate how the visuals never become a distraction that interferes with the gameplay.

Two of the game’s modes – “Adventure” and “Survival” – can be played in either Solo or Co-op. Adventure Mode has players fighting their way through large sea creatures, while Survival has you blasting away at endless hordes of enemies. In Versus, players face off in various modes such as Deathmatch, Team Deathmatch, Orb Rush, Team Orb Rush and Last Mooba Standing. Speaking for myself, I found the versus modes to be much more enjoyable than Co-op. Unfortunately, setting up matches through online multiplayer felt like a big chore, and finding Switch players to play against online can be a difficult task. However, I wouldn’t blame those issues solely on the developers. Indie developers are trying their best to work miracles around Nintendo’s clumsy online infrastructure. 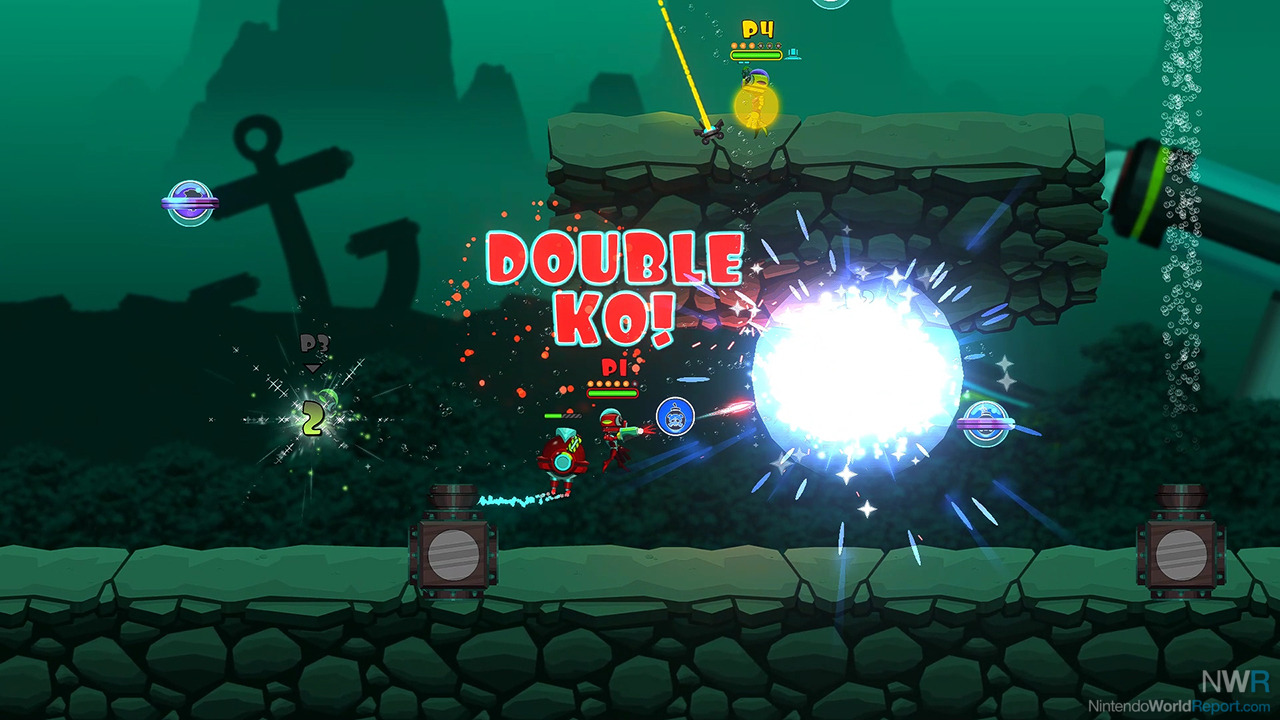 Swimsanity feels like an awkward experience because it attempts to be different things to different audiences. From one side, Swimsanity wants to be a tough-as-nails, hardcore twin-stick shooter. It wears its brutal, unforgiving difficulty as a badge of honor, and there are no menu options to adjust the difficulty. However, from the other side, the game also markets itself as a colorful, multiplayer party game that can be played casually with a group of friends. Decoy Games struggles to balance the two sides, resulting in an experience that tries to be everything for everyone.

This problem is especially apparent in Solo mode, where the difficulty frequently feels most unbalanced. Playing solo can sometimes feel more frustrating than fun with instant deaths lurking around every corner. It’s clear that multiplayer was the main priority during development, while single-player was treated as a mere afterthought. When multiple players work together, the game’s difficulty feels much more balanced and enjoyable. But when played solo, the game suddenly devolves into a dull, unrewarding slog. 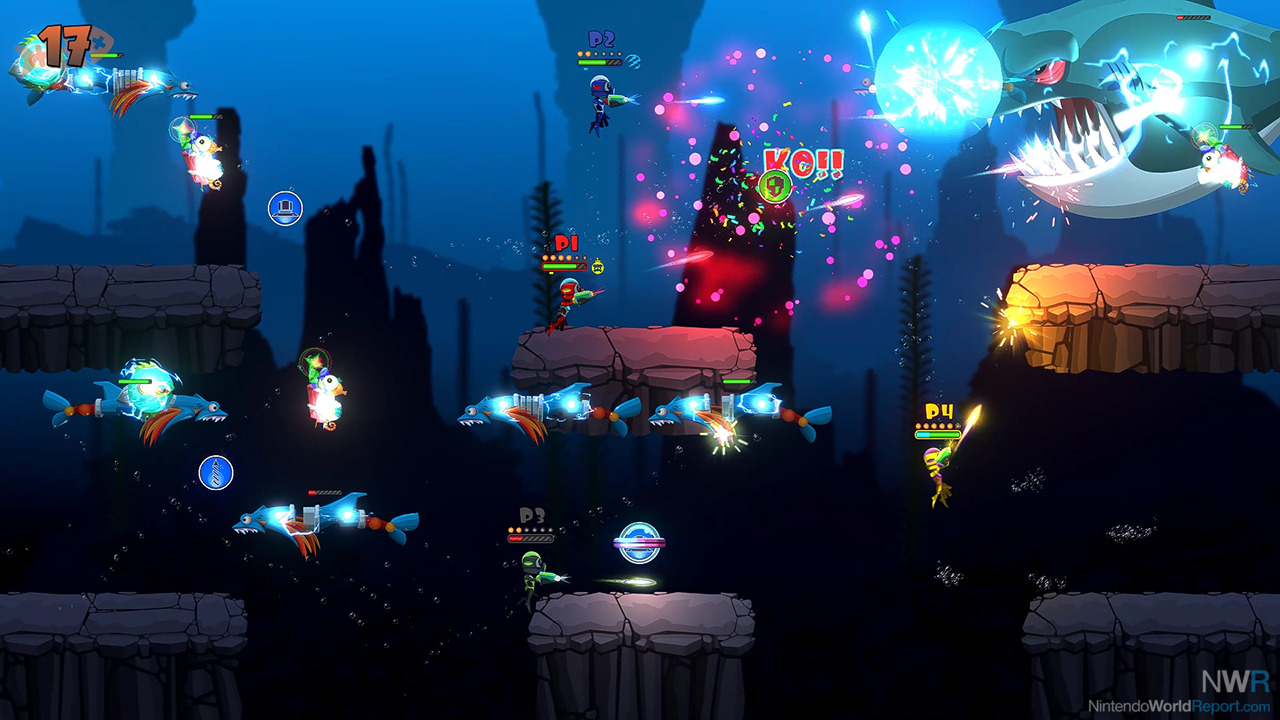 While it may lack originality and fresh ideas, Swimsanity is still able to distinguish itself from other twin-stick shooters thanks to its unique underwater setting and multiplayer gameplay. With roughly eight modes to choose from, Swimsanity can be a blast to play with a group of friends. It’s just unfortunate that it never reaches its full potential due to bland visuals, unbalanced difficulty and lackluster single-player options. Nonetheless, it should still have some appeal to anyone who’s even remotely a fan of the genre.