Taking the path to Growlhalla

Barbearian originally released on iOS devices before making its way onto Switch, which is amazing to me because it doesn’t at all feel like the kind of game that’d work well with touchscreen controls. While an isometric hack-and-slash game doesn’t require laser-focus precision, this frantic and surprisingly difficult game requires the control a phone couldn’t adequately provide. In Barbearian, you embody a bear-skin covered warrior taken from your home by an ethereal being who entered you in a contest of survival as a representative of your kind. 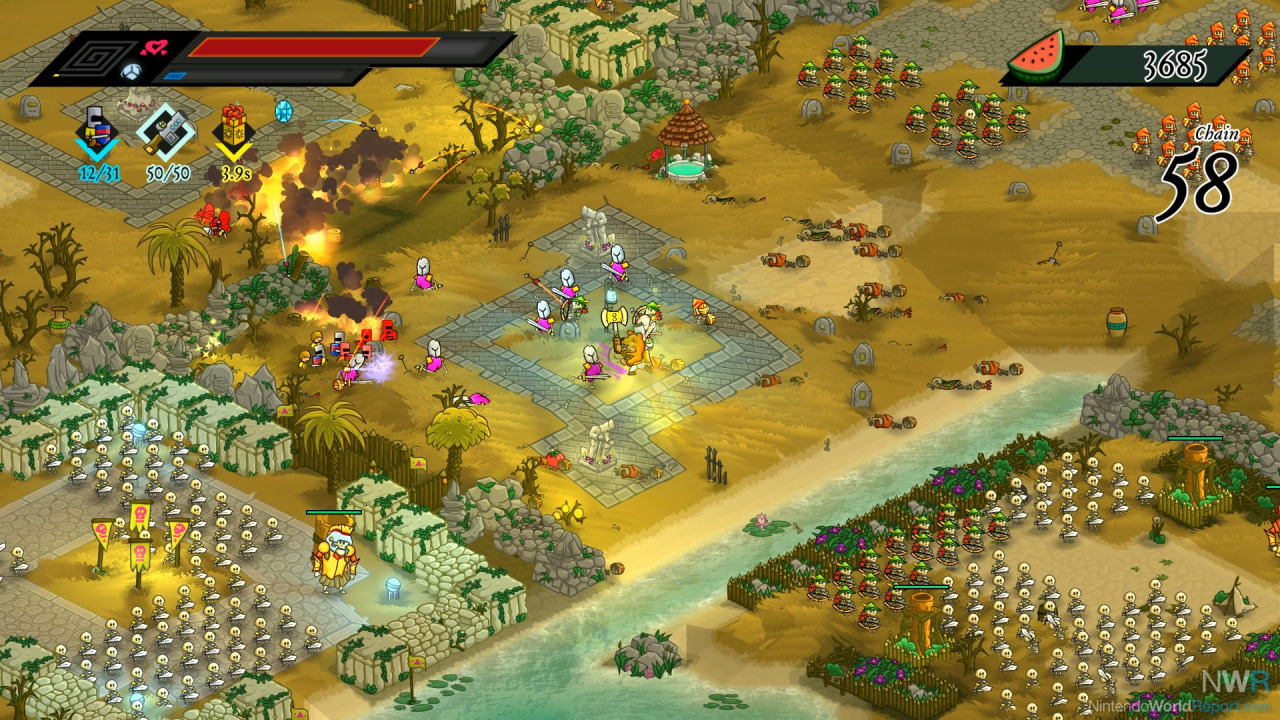 That contest of survival is a series of challenges, each consisting of five sets of three levels. Each level is a relatively small patch of land with flora and fauna as well as stone structures littered throughout. In these levels, throngs of grunts, towers that shoot projectiles, and oversized generals litter the landscape. In order to clear a level, all the generals must be downed, but before doing so you may want to find a test tube device and beat it to pieces. These contain villagers you can collect, train as archers or knights, then bring into battle with you. If your HP is chipped away, health restoring wells can rejuvenate you for a price: currency in the form of fruit and diamonds. That currency can also be used outside of battles for health or grunt regeneration meter increases, alternate weapons, and additional foot soldiers.

Introductory levels are simple enough, with the Barbearian able to mow down droves of enemies with his axe or smash into crowds with his dash, which evokes the parting of the Red Sea with how it clears the field. Temporary power-ups drop from enemies such as a defensive barrier, attack buff, and rotating sphere that hits enemies. Those power ups give an additional damage boost that turns you into a human (bear?) wrecking ball. These early levels are empowering; there’s something so satisfying about how blunt an object I could be in the beginning levels. 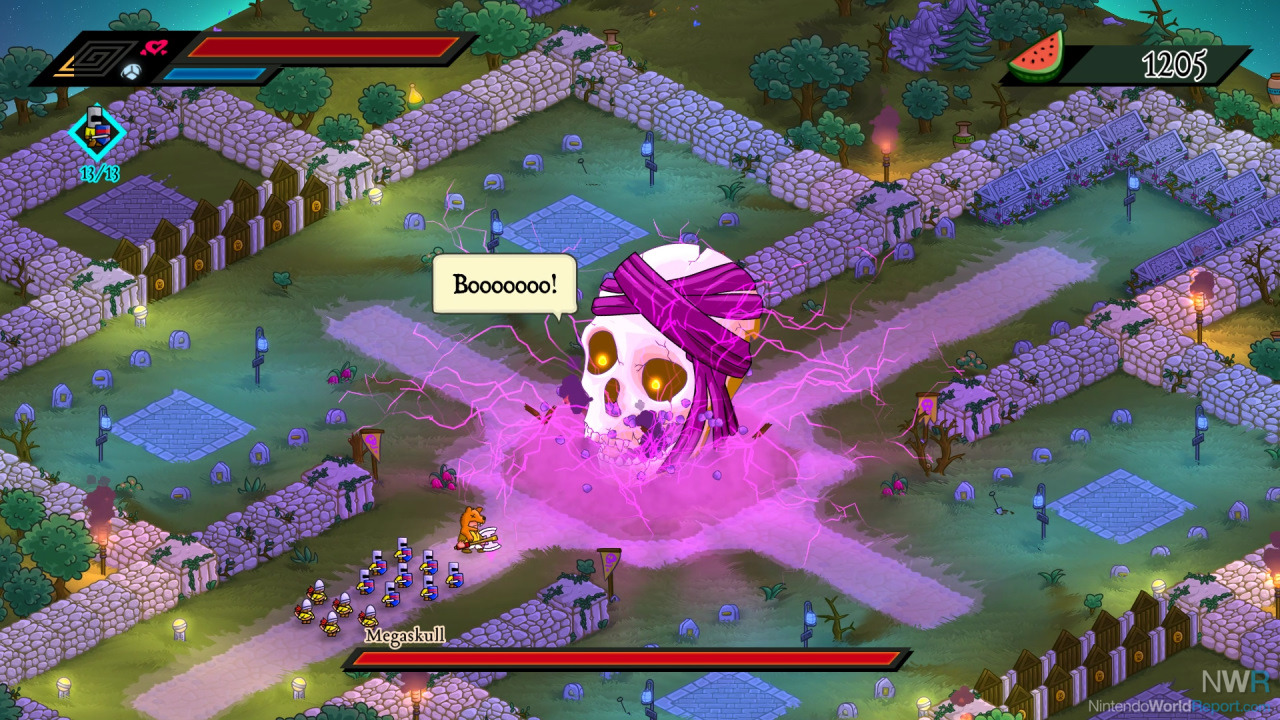 Later levels surprised me with how strategic I had to approach them. Enemies swarmed me and my brigade of foot soldiers and hit like a truck. Instead of pressing head-on, I began strategizing—kite a group of enemies, let my foot soldiers approach them head-on, then flank them from the side. In some situations, it made more sense to divide and conquer, once again letting the army confront the opposing forces on one front, and turning my attention to another encroaching group. The later levels also included spawn points for enemies, adding another wrinkle by needing to stem that root cause of a persistent wave of enemies before being able to clear the board.

I was pleased with the boss battles after each set of levels. Every one had a primary monster or entity with several different phases of movement and attack to contend with. As later phases came, waves of enemies would teleport in, creating an almost bullet hell like environment where I had to weave between mobs to get back to chipping away at the boss. One thing I found funny is that the boss attacks did damage to other enemies on the field, making it advantageous to let them clear the field for you. The bosses hit the right balance of difficult but defeatable.

There is a strange charm to the world of Barbearian. Everything is hand-drawn in a fairly cutesy style, but juxtaposed with this mystic setting of an all knowing god-like entity and a disjointedly connected set of worlds. NPC guides also embody this dissonance, like the chipper Penguin that mixes cheerful chatter of statistics with excitedly telling you it’s unlikely you’ll survive, or the deer-like creature with amnesia whose lack of memories have a direct connnection to gameplay at one point. There’s also a withering oak tree that opens the gate to bosses and always speaks with a foreboding presence while saying things like “all is lost” before allowing entry. These elements create an environment that is disarming with the adorable look and hits you with an uneasiness from its cryptic writing.

Barbearian might be one of the more pleasant surprises of the year. Underneath the hack-and-slash simplicity in sending troops flying with a swing of your axe is robust strategizing and improvising on the fly when your best laid plans crumble. The mystery inherent in its story coupled with the bright and neat visual style adds an additional dimension to the experience. I can wholeheartedly recommend you add this to your Switch catalog.