An abandoned train car in the woods, what could possibly go wrong?

Earlier this year, I did a video on some of the standout demos I had played during one of the Steam Festivals, and one that caught my eye was a side-scrolling horror game that took place in a creepy abandoned train car. This game was Re:Turn - One Way Trip, which released earlier this month on various platforms including Switch. The demo had shown promise with its well crafted atmosphere and relatively interesting puzzles, and I was looking forward to seeing how the full game held up. While overall keeping the same sense that drew me to the game in the first place, Re:Turn begins to show some cracks fairly early on in some unfortunate ways. 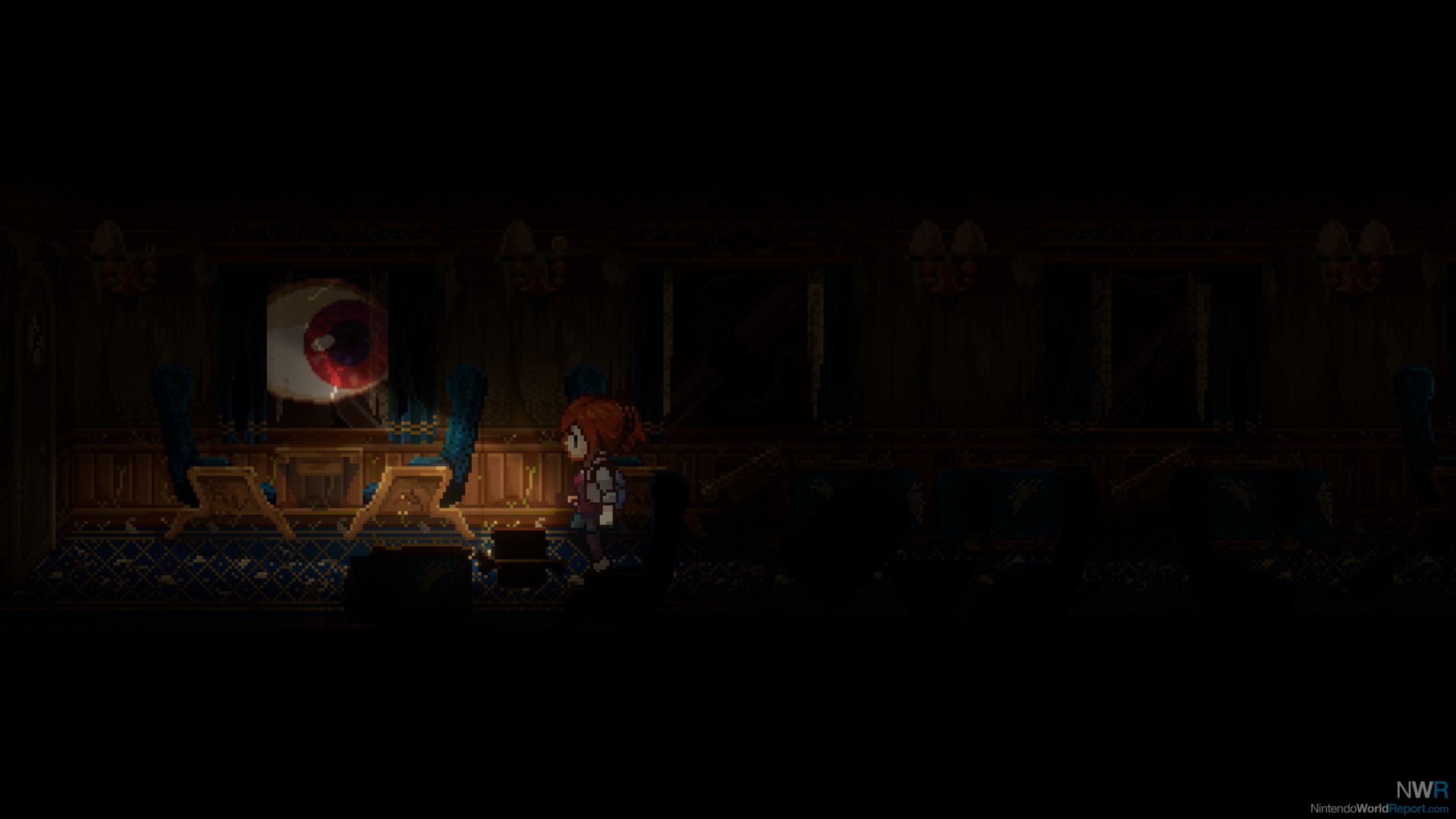 In Re:Turn the player takes control of Saki, a young woman going on a camping trip to celebrate an upcoming graduation. She is joined on this trip by her fiance Sen and their friends Kanae, Yuuta, and Kazuki. After a misunderstanding causes a conflict within the group, they all agree to sleep it off. However, when Saki awakes in the middle of the night she finds her friends are gone. When she goes to look for them she discovers a group of abandoned train cars and, worried that her friends might be on board, enters the train to investigate. It turns out this train is crazy amounts of haunted, and Saki must find her friends while also unraveling the story of the train and the passengers who died on board.

Re:Turn is an adventure game played entirely on a 2D plane, with Saki able to find items to help her solve puzzles as she explores. These are usually pretty straightforward, such as finding a crowbar to break down some furniture blocking a door, or simply finding a key to a door. Every once in a while, a puzzle will require hints to be found around the environment, such as a poem about teru teru bozu that hinted at the combination for a lock, but even these are never really that obtuse. However, some puzzles can be a little more tedious, such as a chapter-long puzzle that required putting masks on doors in order to unlock them, which felt unnecessarily mindless in execution. All but one of the masks is found in the hallway where it was required, and leaving the area without placing it is impossible, making it barely a puzzle at all.

It's these puzzles that show the true major weakness of Re:Turn, one that is very difficult not to notice. Much of the game is built around walking back and forth between the same areas, and Saki's walk speed is dreadfully slow. Unlike most of its contemporaries, there is no run button in this game, meaning that Saki moves only as fast as she moves. It's not even that there is no animation for running, she runs in cutscenes all the time, it's just that you as a player are not allowed to. The lack of this feature unfortunately causes the game to drag its feet at a lot of points, making most actions take twice as long as they should.

My last big problem with the game is the fact that Saki as a character is one of the most dense horror protagonists I have ever experienced. She constantly fails to notice things that the player already has minutes prior, and some of her decisions are baffling in any context other than "if she doesn't do this, the game doesn't happen." It's not that she's unlikeable, but more that her characterization causes her to come off as incredibly dumb. Most of her friends also come off as jerks at times, discounting her experiences as just her exaggerating or being tired. Yuuta especially I found very grating, even if his chapter is probably the most well done section. Again, none of them are what I would call unlikeable, but their characterization sometimes leaves a lot to be desired.

Despite these criticisms I still think Re:Turn is a competently made horror game with some very good atmosphere and an incredibly interesting premise. The sprite art and character designs, while in a way overly "anime", are still memorable and fun in a way a lot of anime style games like this aren't. The occasional tedious puzzle and slow movement speed are frustrating at times but never really felt like they fully broke the experience for me. It's not perfect nor is it what I would call great, but the things it excels at lift it slightly higher than your average 2D horror game. Just not much higher.