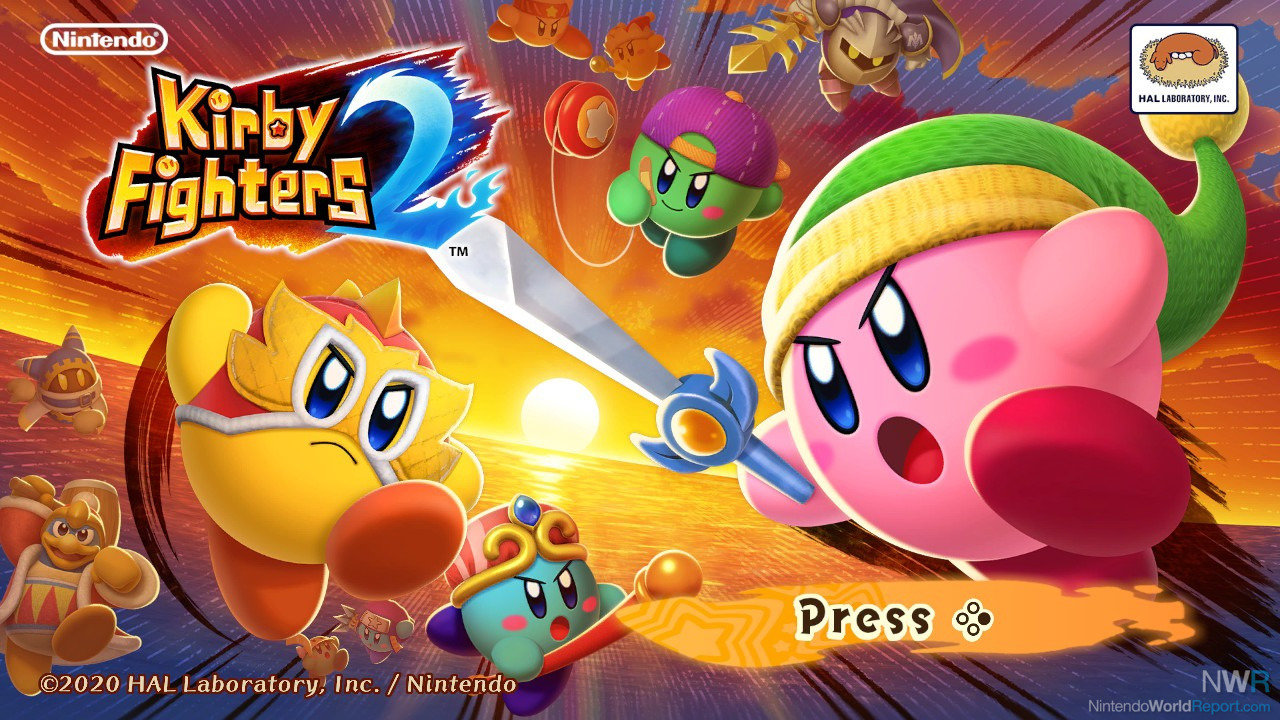 It feels like there are more Kirby-themed fighting games being put out nowadays than any other type of Kirby game, let alone the traditional action-platformer. Kirby Fighters 2 falls right in line as the next take on Kirby throwing down against other Kirbys and different characters from the franchise. This latest take on a party game crossed with a fighter offers a fun, albeit short experience that dances between being a bit lopsided in both content and difficulty, as well as what to expect from a party title. And while it leaves something to be desired, it also has an exceptional amount of charm in the presentation that left me more than simply pleased during my time with it. 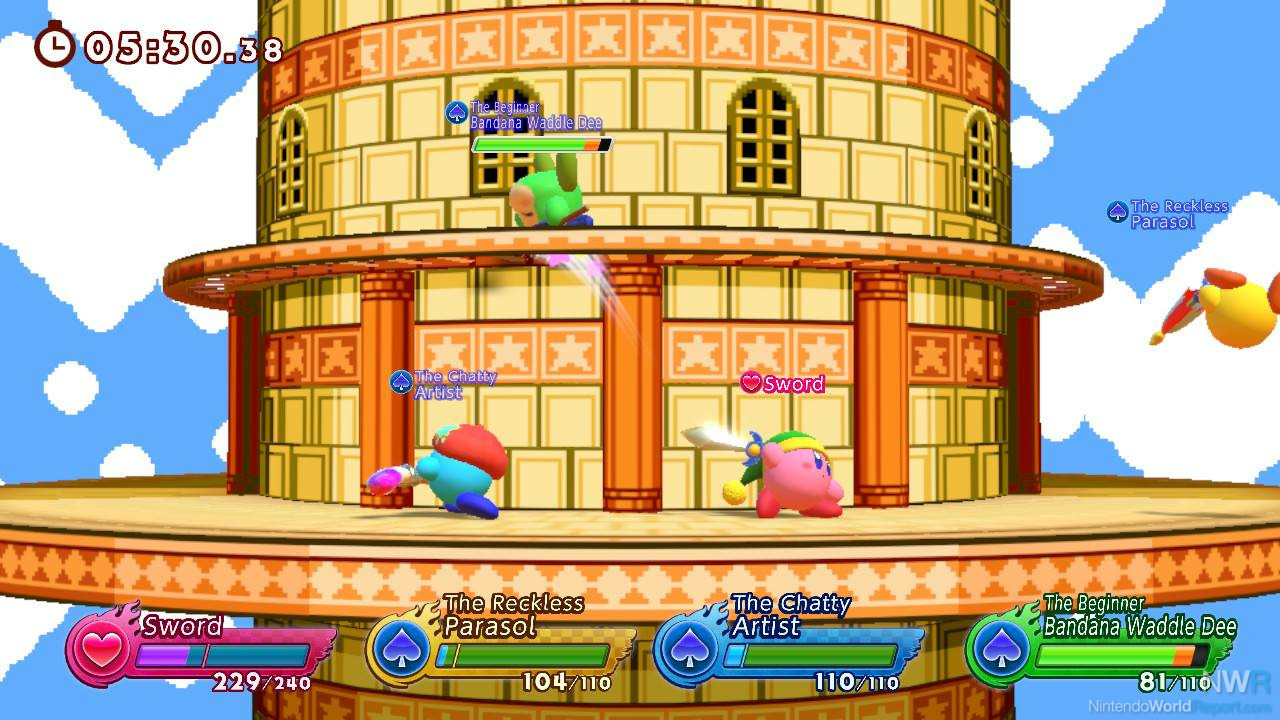 Kirby Fighters 2 is actually the third Kirby Fighters game. The first was a side mode in Kirby: Triple Deluxe, and then a sequel called, “Kirby Fighters: Deluxe” was also released. Not to be confused with the separate series, Kirby Clash or Super Kirby Clash, which are also Kirby-themed fighting games. Unfortunately, I can’t really say that Kirby Fighters 2 makes much of an attempt to stick out from its predecessors, and while that isn’t a bad thing, it does make it increasingly difficult to distinguish between them. Essentially, it’s a fighting game where you play as Kirby with different copy abilities, and you fight to the death. Rather than obtaining Kirby’s signature copy abilities while playing, players choose a Kirby holding a specific ability prior to a match, which in turn acts as a character selection menu; there are also a handful of guest characters, like Gooey. Don’t expect the level of playable characters that was seen in Kirby Star Allies. It’s more about the copy abilities this time around, which are unlocked by earning Fighter Points by playing any game mode. If you know you enjoy a specific ability, it can be a bit frustrating having to grind to get it. The experience was decent, but there did come a point where I was losing my focus on what I was doing and just going through the motions. Depending on the mode, things can get slightly more involved, but by and large, it’s a pleasant fighting game. 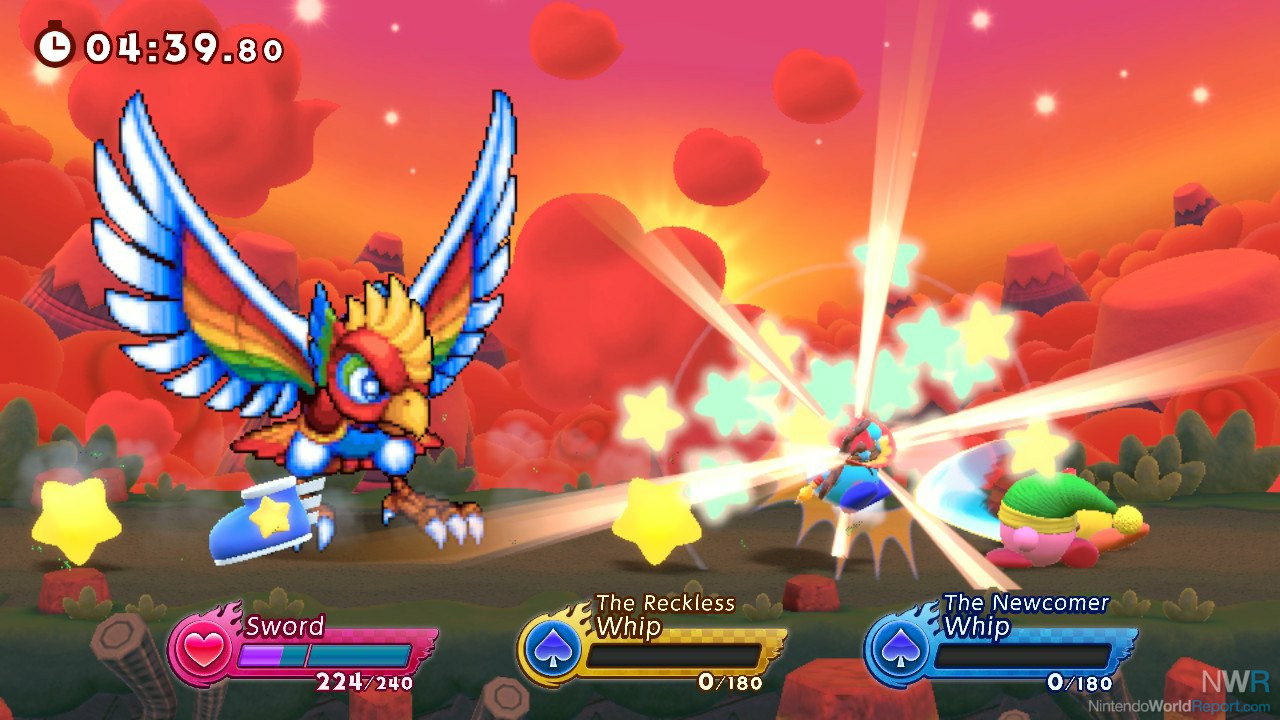 There is a story mode, but calling it that is very generous. King Dedede and Meta Knight have teamed up and you have to fight them because they’re being bad guys at the top of an evil tower. Every battle you fight takes you up a floor, and the cycle repeats. The kicker is that in between every fight, you can choose an item to buff up you and your partner. This adds a thin layer of strategy to the fights, similar to how a rogue-lite game plays. There are also items found within fights that can drastically change the tides of battles, sometimes unfairly. Some items create random events like putting everyone on one side to sleep or filling the stage with healing items. Item Stars that will occasionally just show up can make almost anything happen, in your favor or the opponent’s. A bunch of healing items could appear, everyone could be put to sleep, or a random explosion could happen. It’s funny because this could be a very enjoyable thing in the party aspect, but I didn’t see an option to turn it off anywhere, which kind of clashes with the competitive aspect that an online match could bring. 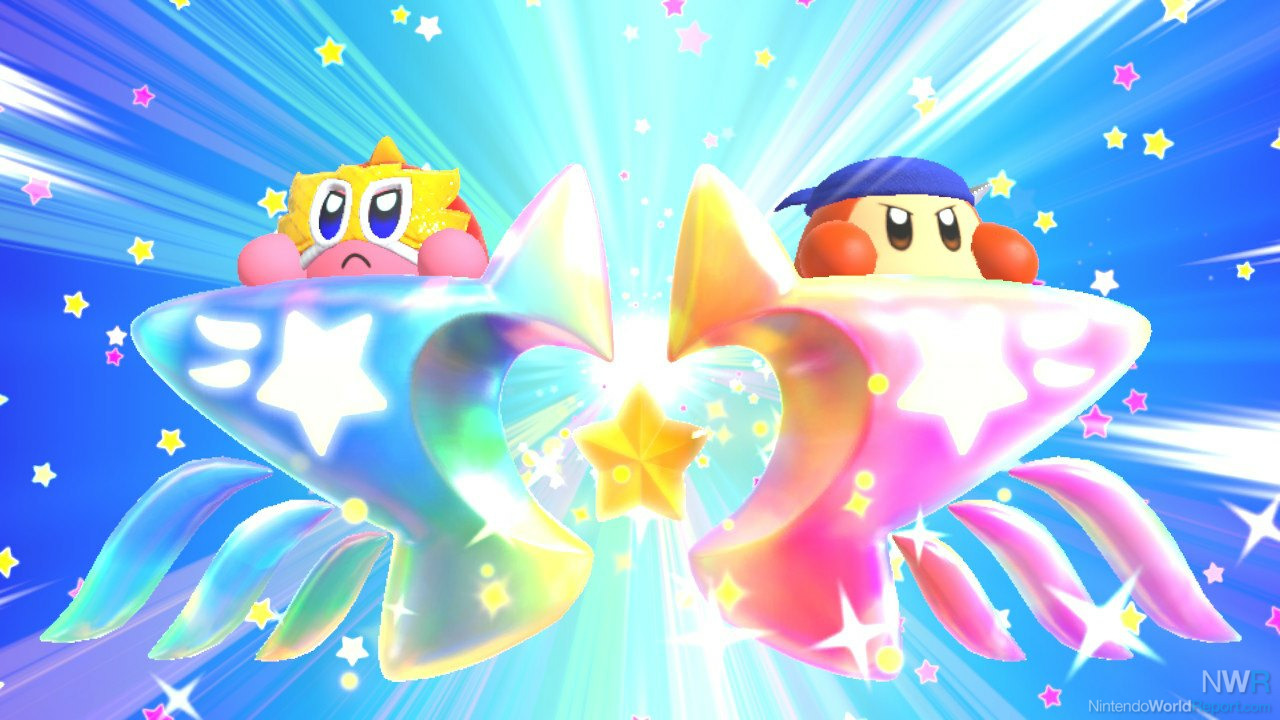 There is a stronger emphasis on double battles in Kirby Fighters 2 than I have seen from previous titles. Every online battle has you partnered up with another player in a 2v2 session. In the online mode, you can just forget even trying to play the core game. I won’t dwell on this, but Kirby Fighters 2 is another “your mileage may vary” experience in terms of performance. I had a few crisp matches, and a lot of slide show fights. A computer player will accompany you if you don’t have a friend. The AI is fine, but can occasionally be a bit too daring. I found several instances where it would run headlong into danger, not really accounting for low health, so it can feel a bit like micromanaging in that regard. That said, battles are so easy that it isn’t that big of a deal. The AI definitely won’t play the game for you like in Star Allies.

While I do think there is a slight issue with its identity, Kirby Fighters 2 brings menus, visuals, music, stage selection, and really an entire package with fantastic presentation. The characters look amazing in HD and have very expressive animations, and I loved the stages. A lot of them have bosses on them that act as stage hazards, but unfortunately there isn’t a way to turn those hazards off. Regardless, they do add a lot to the uniqueness of each stage, and that was appreciated. Kirby Fighters 2, overall, is an incredibly easy game that is somewhat lacking in content. In terms of replay value, it’s fun if you want to play with friends for a little bit, or go chasing golden ranks to your heart’s content. I am hard pressed to say, though, that I would find myself picking this fighting game to play at a party over any other game on the Switch that offers a similar experience. It’s not trying to be a full fighting game, and it’s not doing enough to be a complete party game. I think the strategy aspects in the story mode, the party aspect with the items, and the experience in a competitive sense for online could each have been fleshed out a bit more. This is a very pleasant package that’s not as fully equipped as it could be. There’s a lack of diversity with what you can really do, even just down to the options. I don’t think there is anything particularly bad here, it’s just unimpressively lacking. So for what it’s worth, I think you’d get a few hours of enjoyment out of this budget title. Just don’t expect anything that you can’t find elsewhere.