Unrailed is rarely off the rails

Unrailed is a co-op multiplayer game and freshman outing for the new indie dev team Indoor Astronaut. It brings about a voxel co-op party with a well-detailed tutorial and an easy pick-up-and-play accessibility. The mechanics of Unrailed are basic: You have a train on the tracks but they are unfinished. Gather resources from trees for wood or stone for iron using a pickaxe and ax respectively. Depositing piles of these materials into the building cart will automatically forge them into the required train tracks that you lay connecting the tracks to keep the train on the rails. The goal of each level is to get the train from the station at the beginning of the level to the station at the end, but there are a few wrenches thrown into the mix to make this a challenge. 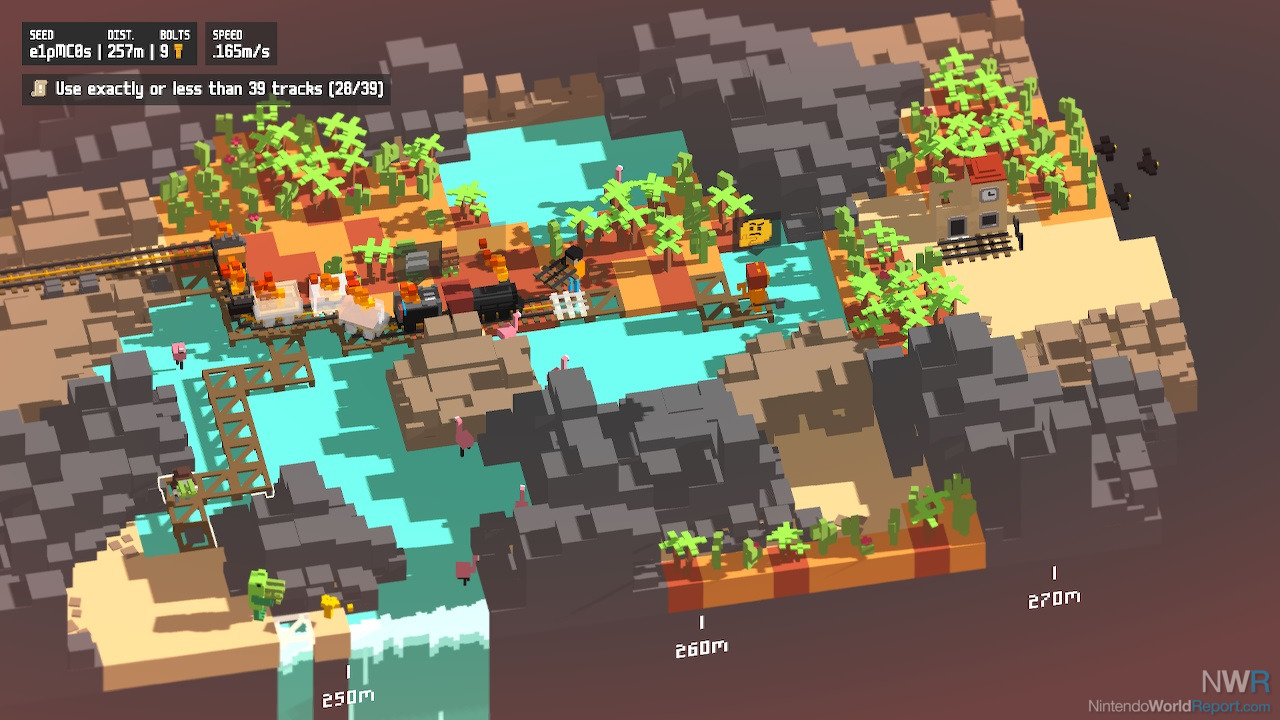 The environment comes with wildlife such as llamas and cows to block your path. Along with that, non-player characters exist solely to remove tracks from your path and sabotage the train itself. These environmental hazards are procedurally generated, leaving a level of randomness to the map layout itself with rocks and rivers to traverse. Additionally, the train has its own internal heating issues that can cause it to start on fire. It doesn’t take damage but will make the cars unusable until each car is put out with a bucket of water (your third tool). These hurdles can prove difficult but never insurmountable being presented at the start of the level with plenty of time to plan out alternative routes and ways to avoid the incoming bumps in the road.

That is the central loop of Unrailed: building this train along its path with a partner. It is co-op only, so if playing solo, an AI companion is provided with easy emote controls that allow for quick instructions to your partner without missing a beat. With two players, the work never feels overwhelming and its learning curve is low because there’s really only a single button interface. You can dash, or you pick up your tool of choice but to engage with chopping down trees or mining iron you simply have to be near the item and it automatically begins. If you have an axe and are near a tree, it starts chopping. This is great for new players but for me, it felt like it oversimplified the already basic gameplay. There is also an unlockable upgrade system that can increase mining speed or train creation speed providing a needed progression. 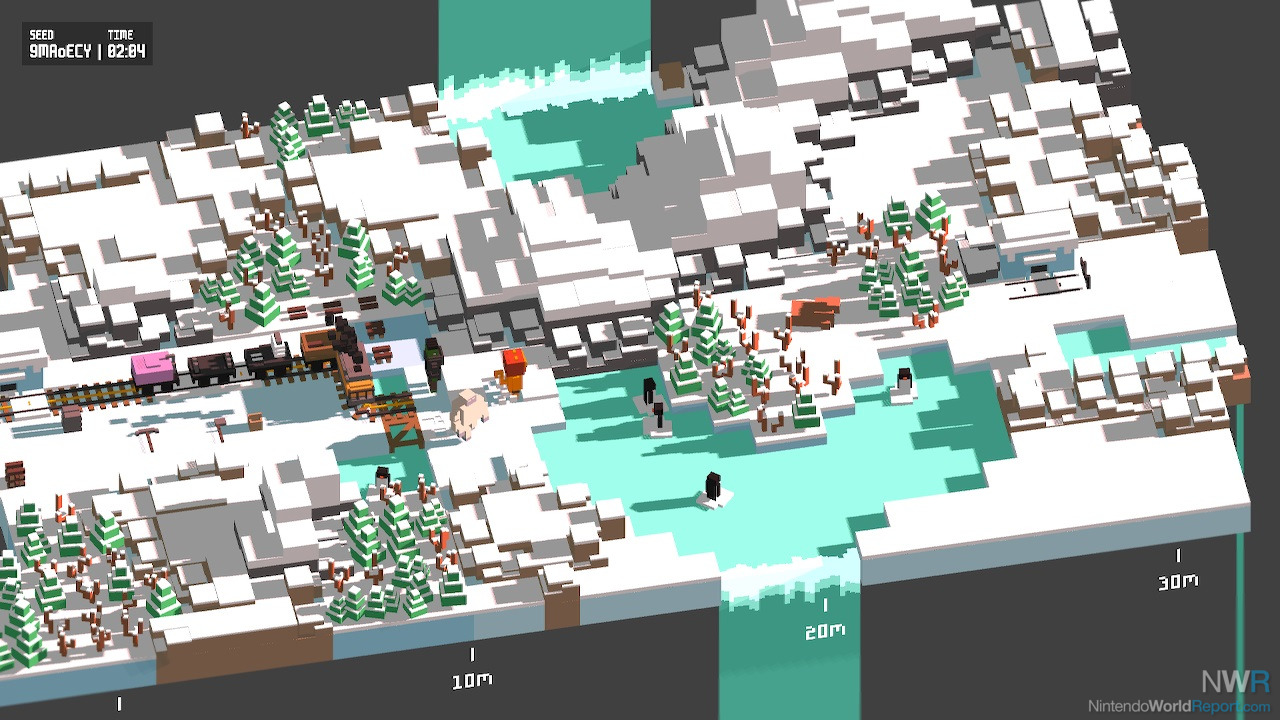 There is an endless mode, a difficulty-adjusting random level mode, and a versus mode so you can engage with the mechanics in a variety of different scenarios. In the versus mode, there is an added car to your train that when fed wood or iron can shoot a cannon ball to the opponent’s train area that makes it possible to set the train on fire or destroy important pieces of track. This adds another layer of variety but rarely determines the end results of any versus matches played. It allows for some fun competitive back and forth but with the simple playability, the excitement never exceeds a dull roar.

The graphics are voxel in setting, giving that beautiful curated Minecraft quality with intricate environments and fantastically designed cosmetic character costumes. The main issue with the way the game looks is that the levels are small and diorama-like in design but then pulled back in view so you can see most of the level. This loses all well-crafted detail and makes the action hard to see. This includes your tasks of chopping or mining, which is solved with a progress bar above your head but otherwise, this viewer couldn’t tell. This problem is then multiplied in versus mode with two stages being shown side by side making the action smaller and harder to differentiate tiles and place tracks. The struggle to see the details becomes part of the challenge, struggling with differentiating tiles instead of the obstacles built in. Especially when cosmetics are unlockable, they lose their appeal when you can’t see them equipped. 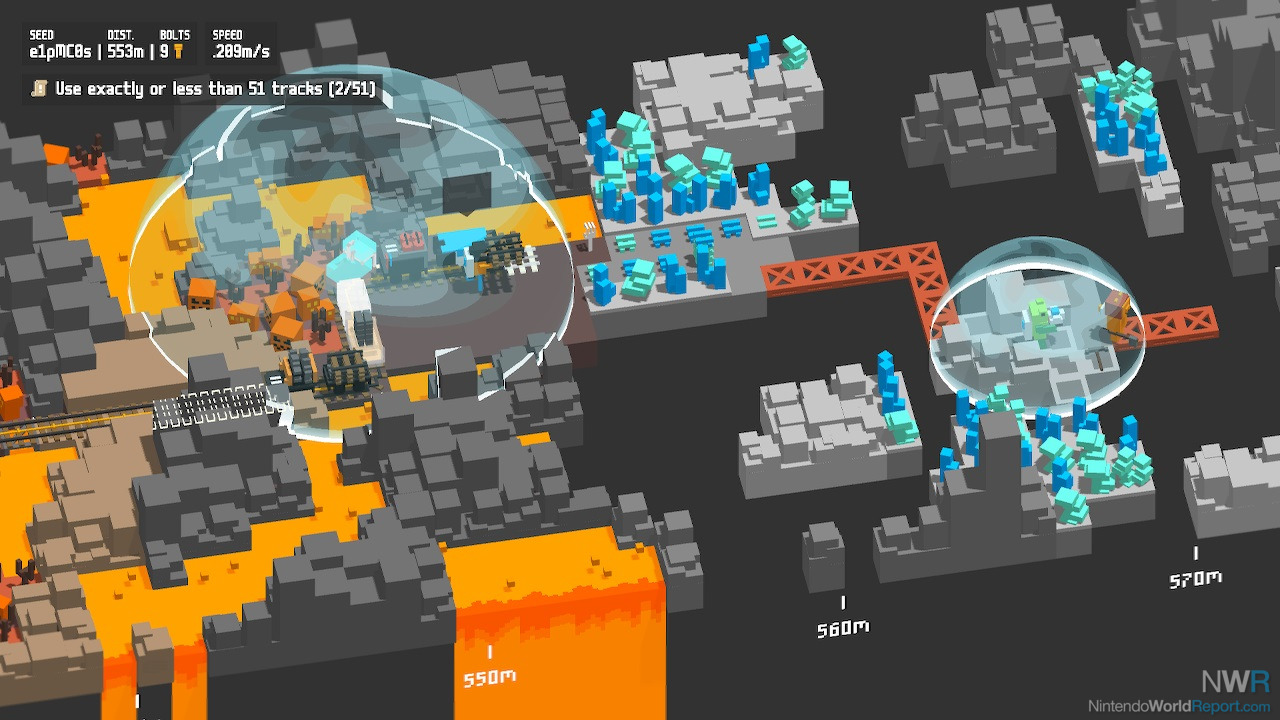 Unrailed creates a party game atmosphere in a voxel diorama setting. The mechanics are simple for pick-up-and-play family parties of all ages but anyone looking for in-depth strategies and play will find it sorely lacking. While its graphical design is cute, the camera view loses a lot of this design quality leaving the players to squint to see any kind of detail. It brings the party atmosphere with an innovative idea but by simplifying the activities lowers the excitement potential. There’s fun to be had here but mostly as a warm up.