As in life, hell is other drivers.

When I first got wind of Hotshot Racing, I incorrectly assumed that it would be similar to Horizon Chase Turbo, being a throwback racing game and all. That’s not the case, and Hotshot Racing may be better for it. This game has more in common with actual arcade racing games like Sega Rally with a low-poly look that reminded me a bit of Virtua Racing. It’s a fun time, great for multiplayer sessions, but requires a bit of a learning curve.

The game’s main stage is, of course, Grand Prix mode, in which you select a driver and a vehicle (generally organized into four categories based on handling), then go for gold by winning points over the course of four races. To win, you must maneuver around the other aggressive drivers and hit checkpoints in a certain amount of time--just like in the old arcade racers of yore. Once you start earning big bucks on the circuit (by winning), you can spend your moolah on different racing suits for the drivers and various body options for the cars. There are also three difficulty levels which modify the checkpoint time requirements and how aggressive the other drivers are.

There is a big hurdle, however: Winning races depends on your ability to learn and master the art of drifting. The closest analogue that I can think of is Mario Kart 8, but you’re not holding a “drift” button down. Rather, you tap the brake while going into a turn, which sends your car’s back end swerving. You can then widen or tighten your turn with the left stick before getting back to straight. This is tougher than it sounds, and different cars have wildly different handling. Some turn too tightly while others slide too far, but you’ll eventually find the cars that work for you. Drifting (and drafting--staying behind another car) refills your boost meter, which becomes more important as the difficulty increases. I was having a bad time with Hotshot Racing until I figured out drifting, so understand that there may be a learning period.

It would be helpful it Hotshot Racing had included a brief tutorial, but there’s not one, so my best advice is to hit a relatively easy Time Trial track (which can go on forever) to learn the ins and outs of this game’s physics without worrying about a gold trophy. Once you can get around a given track without sliding into a wall, go to another track with a different layout. Repeat until you know what you’re doing. The game offers several different viewpoints, which you toggle with the X button (at any time), and if you really want to capture that arcade experience, yes, there is a driver’s-eye-view mode.

The game also incentivizes learning how to drive each car competently. Each one has a list of achievements to work towards, like boosting so many times or drifting for so long. Hitting these goals allows you to unlock more body options for that car, be it paint jobs or various parts, like spoilers and headlights. I should note here that parts will not improve a car’s performance--they’re purely decorative. I did not find these incentives to be all that fulfilling and continued to lean on the cars I felt comfortable driving. 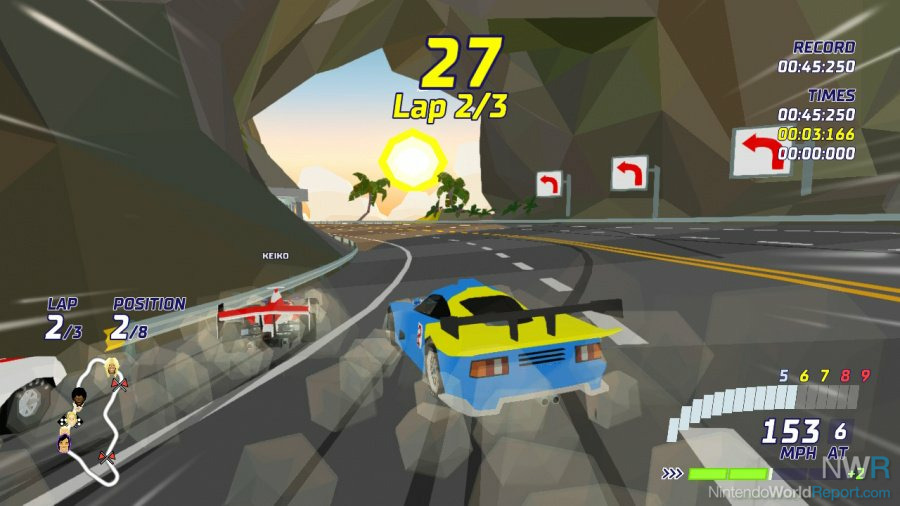 Despite the Grand Prix mode, the overall focus of Hotshot Racing is in multiplayer, which you can tackle in any mode, even Time Trials to some extent via ghosts (staff or downloadable). You can race with four players locally or eight players online. You can even use your Mario Kart 8 Joy-Con wheels, because Hotshot Racing supports motion controls. During my time on the review, I was never able to get in a functioning online room, either a quick match or joining a game. There is an option to play only with friends, which is appreciated. In addition to a standard race, two other multiplayer options exist: Cops & Robbers and Drive or Explode. In the former, some players are robbers trying to evade the fuzz while other players are cops. Robber cars have HP and will eventually explode after being rammed by cop cars. Drive or Explode is basically an arcade version of the movie Speed, except it’s not a city bus. If you go below a certain speed, your car starts taking damage and will eventually explode--it’s a last-man standing kind of game.

Aside from my previous comment about wishing for a training mode, I don’t have much to say in the negative about Hotshot Racing. There are only sixteen tracks, which is kind of a bummer and you’ll start cycling through them pretty quickly in multiplayer bouts. Your driver is a chatterbox during races, and they just don’t have many things to say, but the soundtrack and sound effects are great. Strangely there were a few times where I could not go back in the menus, which forced me to restart the game a handful of times. Finally, if the new body options for your cars doesn’t excite you, then playing by your lonesome might get old rather quickly (as it did for me).

Once I got the hang of drifting, I really started enjoying Hotshot Racing, but it will not sustain me as a solo player for long. Its utility (for me) will be multiplayer shenanigans, which is just fine.