Sometimes you just need a kiss instead of an embrace.

For the second time in 2020, Polish studio Draw Distance has published a pure visual novel set in the universe of Vampire: The Masquerade. Shadows of New York is described as a “standalone expansion” to March’s Coteries of New York, with most of the same characters but its own storyline. It’s a solid companion to the first game, but a short one.

Shadows of New York takes place a few months after the events of Coteries of New York, so much so that the game acknowledges New York locking down due to a pandemic as part of the story. There’s a single playable character named Julia, a member of the Lasombra clan of vampires that was not represented in Coteries. Before receiving the Embrace (being turned into a vampire), she was an investigative journalist, and it is this talent that causes her to be forced to investigate the death of a rival vampire clan’s leader in what appears to be a “locked room” mystery at the start. The palace intrigue among the Camarilla (overarching association of vampires) is central to the story, as there is no end to the possible suspects who could have brought the leader of the rival Anarch vampire faction to his final death. The events of Coteries are referred to, and part of the investigation involves dealing with four friends the players in Coteries could form partnerships with, but the story can work independently of its predecessor. 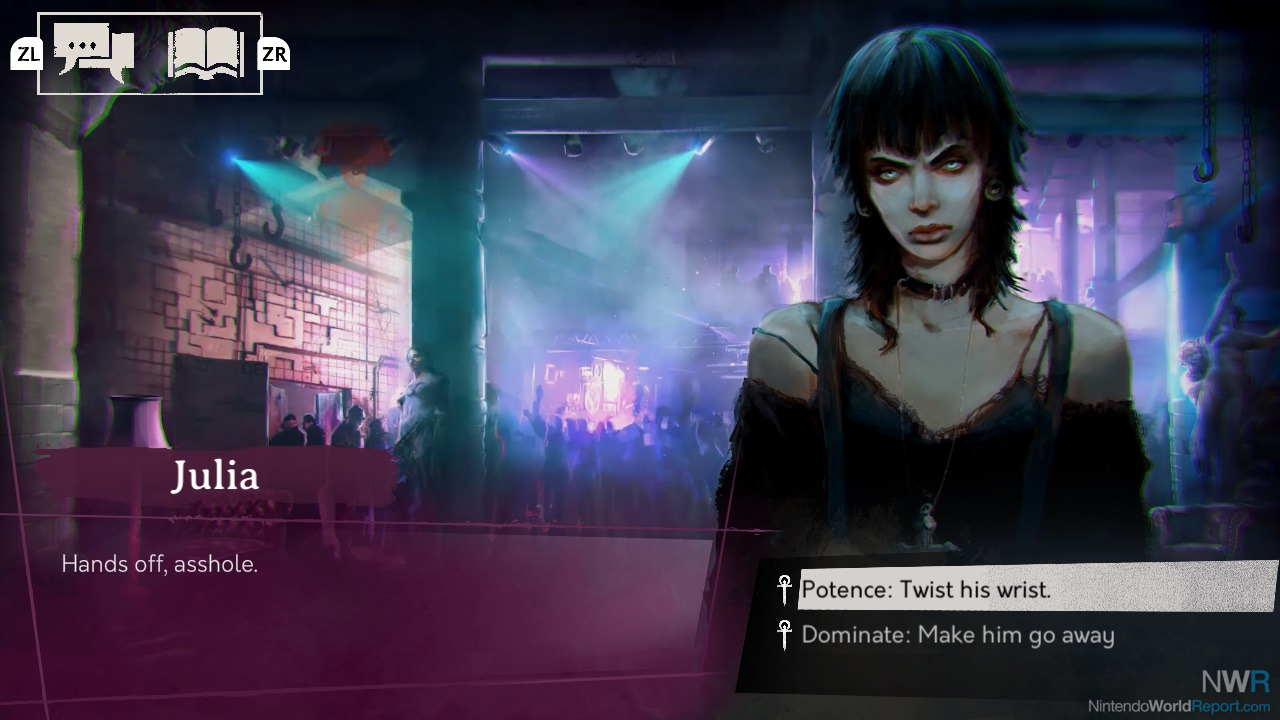 Yes, that is a vampire wearing a cross.

With only a single character to play with, Shadows of New York is more of a visual novella as opposed to a full novel. The game is divided into eight chapters: two chapters of setup, five choices, and the climax chapter. From the third chapter on, a binary choice is presented at the end of the chapter that assigns “traits” to Julia, which determines how she ends up solving the mystery. Examples of traits include “glass half-full” / “glass half-empty”, or “loyal to myself” / “the clan”. Getting to one endgame can be accomplished in a couple of hours even with taking the text slowly, and an option is present to skip text by holding Y to make replays run faster, but it’s important to not abuse the fast-forward in this game. There’s no option to view older text, and the game does NOT call out which options have been chosen previously upon replay. It’s almost necessary to take screenshots/videos when you make the choice that determines a trait, because if you want to get all the endings, it’ll be necessary to get every single option.

I’m not sure how well this game will age in terms of its story beats—it’s very much a game of the moment. In addition to references to quarantine, social media, and sex scandals, there’s an early namedrop of the Gawker Media lawsuit. It’s not as in-your-face with the references, partially due to the short runtime and partially due to the in-universe excuse that the character’s clan of vampires causes technology to break by looking at it (That hit a little close to home for me). The first visual novel had constant interruptions to urge your character to feed (take blood), but Shadows doesn’t have these, which I did appreciate. Shadows also plays at the “lesbian vampire” trope by giving Julia a female love interest/sounding board at the end of the night, but as they’re not a fellow vampire or a thrall you can (sadly) guess how that relationship is going to conclude.

Some of the environments are recycled from Coteries of New York, but all I ask for in my visual novel expansions is some new locations and Shadows does deliver that. Julia gets plenty of screentime, which is nice to see with a defined character, and she comes across as someone who’s seen a lot. Aside from the stings when something hits the fan, the music is mixed staggeringly low as to be inaudible, so it’s hard to judge it.

A lot of the world-building in tabletop game universes comes from a DM, and the Draw Distance visual novels aim to create almost a one-on-one story. They’ve done well in the first couple of attempts this year, so if you’re looking for an entry point into Vampire: The Masquerade, Shadows of New York is worth staking out.