It might not be massively-multiplayer, but online Final Fantasy is coming to Nintendo Switch in the form of Final Fantasy Crystal Chronicles: Remastered Edition. The GameCube original was the first home console entry in the franchise since Final Fantasy VI to appear on a Nintendo platform, and now Crystal Chronicles returns with a fresh coat of paint and new multiplayer options, but not all that glitters is gold. The cumbersome local multiplayer that made use of the Game Boy Advance is gone, and in its place is online co-op for Switch players in the same region. It was a bold choice then as it is now to tailor an RPG towards being played not as a solo experience but more as a shared one, and in spite of some engaging moments, the Remastered Edition of Crystal Chronicles feels like a darkened orb in need of light. That metaphor isn’t just a veiled reference to the original Final Fantasy, though; it’s very likely you’ll spend a large part of the game as blind as Matoya.

Beginning in the village of Tipa, you set out with your trustee caravan to collect myrrh, a substance that allows crystals around the world to protect its inhabitants from poisonous Miasma clouds that threaten their very existence. At the outset, you create a character from among four races: Clavats, Selkies, Yukes, and Lilties. Each race has a unique appearance and different attributes. A Yuke, for example, is more adept at magic and casts spells faster than the other races. After choosing your race, gender, and appearance, you also select a profession for your family, who live in Tipa and can provide benefits to you throughout your adventure. You can create up to eight characters, and each one has their family living in the village as well, which can be helpful for enjoying the benefits of each profession.

The story of Crystal Chronicles is told in fits and starts, which is another area where it diverges from more traditional Final Fantasy titles. As you take your caravan around the small world map and its eight different zones, brief cut-scenes pop up almost like random encounters. In these, you meet other travellers undergoing journeys similar to your own and learn about their trials and tribulations. They range from somewhat interesting to laughably pedestrian, and ultimately I don’t think they add much to the experience. There are a few particular characters you encounter that play a larger role in the adventure, but most of these vignettes just felt tacked on. That said, a certain individual makes multiple appearances and his advice is necessary to access the final areas of the game, so it’s important to take heed of his messages. 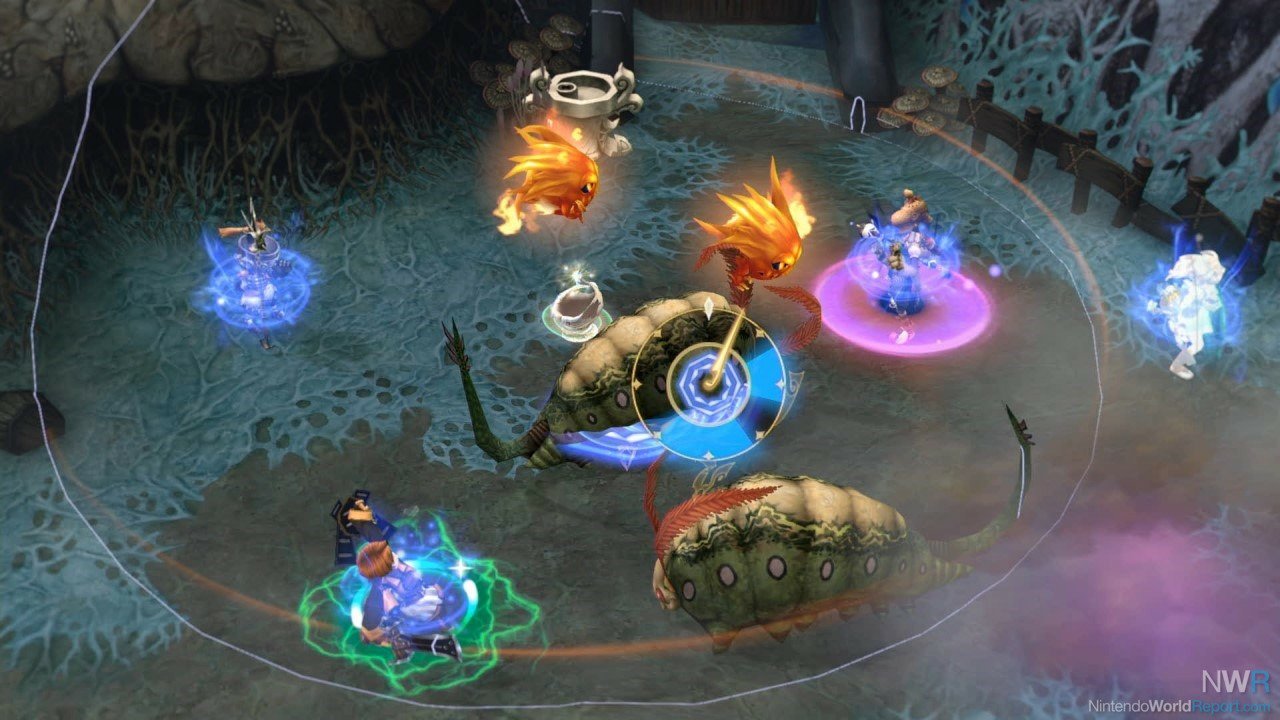 You steer your caravan to individual icons on the world map, and these represent dungeons, villages, and ports you can access. Including the final one, there are 14 dungeons in total, and these are where you will spend most of your time. By completing a dungeon, you earn a drop of myrrh, and after acquiring three drops you return to Tipa to empower the town’s crystal, keeping the Miasma at bay for another year. With each passing in-game year, new opportunities open up, such as a boat that can sail you across the water to a new continent. As time passes, previously-completed dungeons can be conquered again, with stronger enemies and better treasure. This represents the main gameplay loop: rinse and repeat the 13 primary dungeons to acquire artifacts, healing items, crafting materials, and recipes to improve your character so that you will be prepared for the gauntlet of an endgame.

Within dungeons, gameplay revolves around exploring a series of connected passages and areas as you seek out the boss. Along the way, minor enemies will engage you and offer gold, items, and magicite as a reward for defeating them. Magicite grants the ability to use a particular spell by equipping it to your command menu, but it doesn’t stay with you after a dungeon is completed, so you need to recollect spells every time you start a new one. Spells can also be combined to form new ones; for instance, Raise added to Blizzard, Fire, or Thunder will cast Slow. 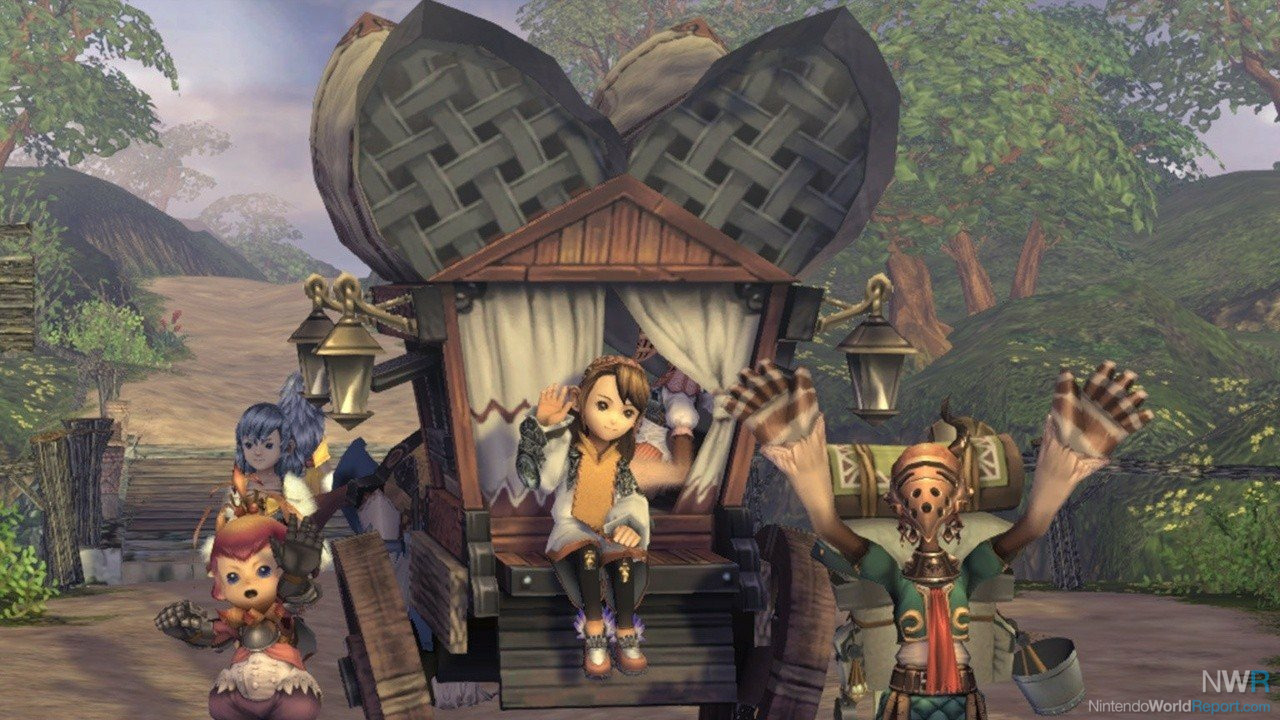 Ultimately, the action-RPG combat is pretty simplistic. You have a basic attack that can combo three times by pressing the attack button with a set timing. A force attack can be used by holding down the attack button, which generates a circular area around your character that can be aimed at enemies and then activated. Spell casting works in a similar way. A command menu appears in the top-left corner of the screen that displays the current action you have equipped, like Attack, Defend, or a particular item or spell; the first two can’t be switched out, but the rest can be, and more slots can be added as well. Spells and force attacks can be interrupted by enemies, so you need to make sure you have lots of space and time around you before channelling those moves.

Unlike nearly every other Final Fantasy game, there are no experience points in Crystal Chronicles. Progression is rather muted and quite gradual. Artifacts are items collected in dungeons that bestow stat boosts, like Attack +1 or Defense +2, and you get to keep one artifact after successfully completing a dungeon. The rest of your artifacts, like magicite, are temporary and disappear after you leave the area. The other way that you improve your stats is through upgrading your equipment, which is another task that moves at a glacial pace. You first need to find a scroll that provides the recipe for a weapon, armor, or accessory, and then you need to collect the materials for it. Finally, you need to find a blacksmith who is actually able to craft the piece for you. This system means that the towns are actually fairly boring to explore since you’ll usually just find an armorsmith, a weaponsmith, and maybe an accessory shop. Even then, there’s no guarantee that any of those outfits will be able to assist you. 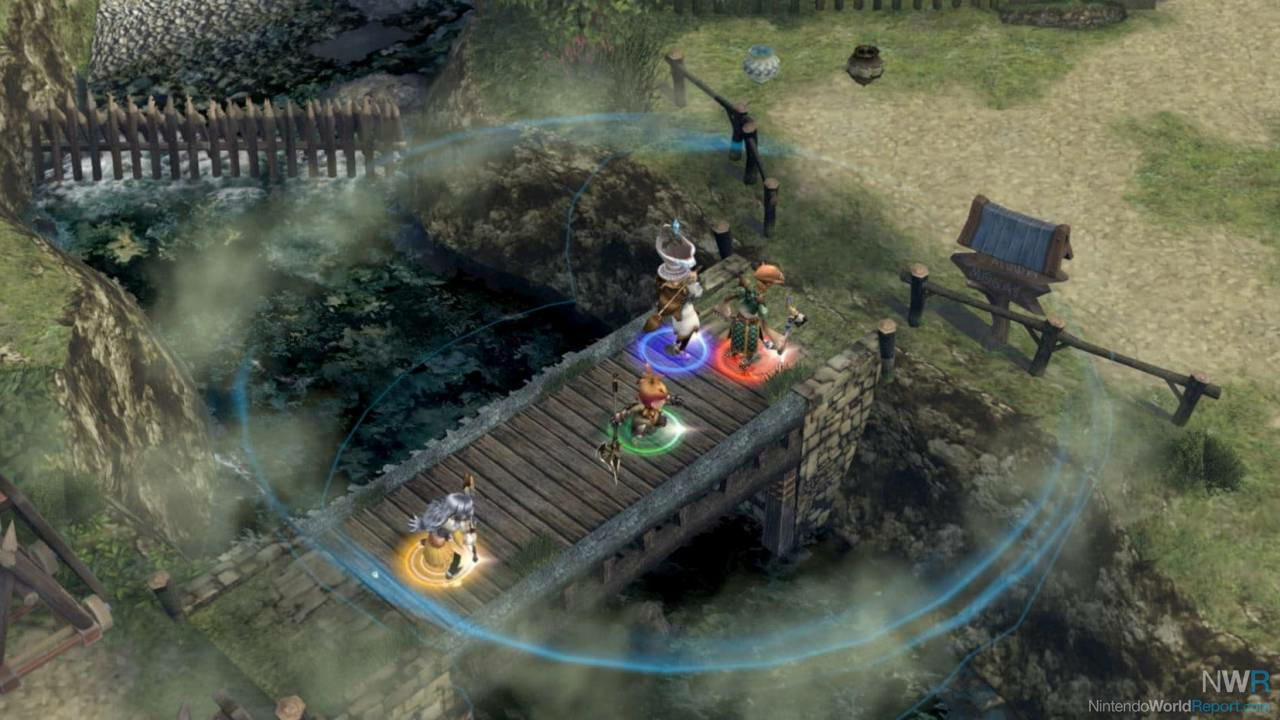 Even though the aesthetics are improved over the GameCube original, Crystal Chronicles isn’t necessarily one of the more attractive remasters we’ve seen on Switch. The visual improvements, like other changes made to the game, are merely serviceable. There is some decent variety to the dungeons themselves, fortunately. The music is also a highlight of the experience, as is the voiced narration that plays in front of every dungeon segment. The audio elements add a whimsy and charm to the game that makes the world truly feel like a fantasy.

One of the major selling points of the Remastered Edition is the addition of online multiplayer, even if it comes at the expense of local co-op. For a game in 2020, we’ve come to expect a certain level of competence and accessibility when it comes to hopping in and out of online games with friends. Disappointingly, Crystal Chronicles fails on both accounts. To start with, friends must be added manually via an Invite Code, which does make sense given the cross-platform options with PS4, iOS, and Android. After you’ve added someone as a friend and they’ve added you, you can then play together, if the stars align, that is. The person who wants to join the host has to be in the same map location as the host or at least have access to the dungeon that the host has set up, and this becomes an annoying restriction. Making matters worse is that when a dungeon is finally started and then completed, you only have the option of playing the same one over again; you have to actually disband your group in order to play a different dungeon. This design choice is nothing short of baffling. 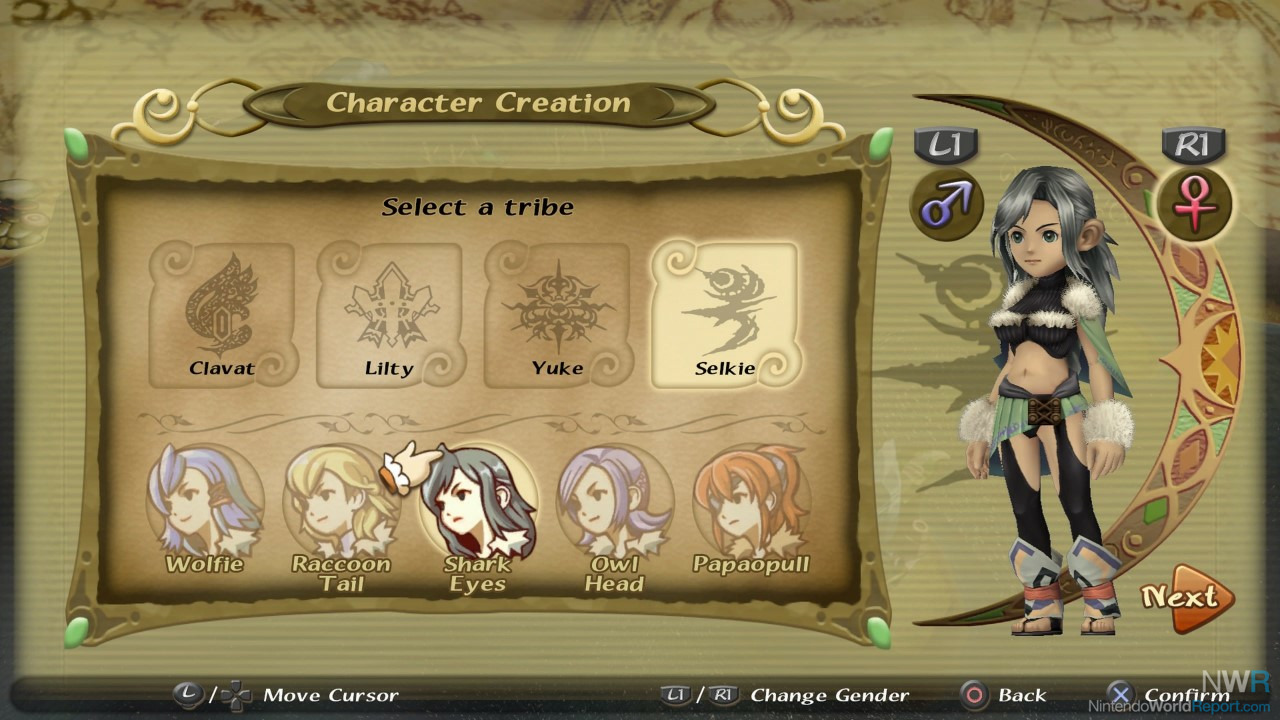 Given that much smaller games have figured out fast and easy ways to bring players together makes the frustration of Crystal Chronicles multiplayer even harder to stomach. On the positive side, players can download a free Lite edition of the game and play all of the pre-final boss dungeons while only needing one person in the group to own the full game, but the process is still frustratingly inaccessible. It does appear that the difficulty scales based on the number of players in your party, but this means that if the host creates a dungeon on its third iteration and the other members are underpowered, your group is likely to be quickly overwhelmed.

As a solo experience, Final Fantasy Crystal Chronicles simply isn’t all that compelling, so if you aren’t planning to spend much time grinding out artifacts and materials online with friends, I can’t recommend it. There are pieces of a memorable and enticing experience here, but they fail to coalesce into a meaningful whole. Barebones gameplay, cumbersome multiplayer, and an immensely steep endgame difficulty spike outweigh the Remastered Edition’s 13 post-game dungeons and mini-map. While the most dedicated players will find a game containing dozens of hours of grinding and challenge to overcome, most are likely to encounter repetitive and simplistic gameplay with no major story to reward their endeavoring. Many will no doubt find the final main game dungeon to be too great an obstacle to overcome. Without nostalgia to buoy its lackluster gameplay loop and online functionality, Crystal Chronicles is one caravan ride you may want to skip.

So conflicted on this, but the nostalgia has won out for me. Will be getting it to play with my sister like we did years ago on the Gamecube (and bring along the few friends interested enough to join us).

Thanks for the details on how online will work, some other sources have been lacking in that category.

Its nice we get some things added, and the free versions for less interested friends softens some of the negative blows. Hopefully someday we get a proper sequel to this game that fixes all of the jankiness the original and this one have --while side stepping all the poor attempts at sequels that came out later to preserve the spirit and tone of the original.

I get why they decided to forego local play, but the company that managed to turn around FFXIV should not be capable of f***king multiplayer in this up.

So conflicted on this, but the nostalgia has won out for me. Will be getting it to play with my sister like we did years ago on the Gamecube (and bring along the few friends interested enough to join us).

Thanks for the details on how online will work, some other sources have been lacking in that category.

Its nice we get some things added, and the free versions for less interested friends softens some of the negative blows. Hopefully someday we get a proper sequel to this game that fixes all of the jankiness the original and this one have --while side stepping all the poor attempts at sequels that came out later to preserve the spirit and tone of the original.

Yeah, I'm in a similar situation. I was really looking forward to a Nostalgia party with this game since I have fond memories of playing through it on GC and working past the limitations.

Then last night my younger brother walked up to me and asked me when I was getting the game. He has a bunch of internet friends who are apparently getting ready to play it and so he got it for himself, so I decided I might as well take the plunge as well!

That said, I wasn't aware it's just $29.99 on the Switch, so at least the price was lower than I expected when I went to DL it.

Oof, yeah, this game is rough, even outside of the clunky online setup. I don't think it's aged very well, and could have probably used more of a remake than a remaster.