You play as a game designer, coding a game, while someone else plays a game.

It’s not very often you see stop motion animation puppeteering these days, let alone in a video game. That animation style on its own gives Takeshi and Hiroshi, from Oink Games, a distinct look in a day and age where it can be hard for games to stand out on the Nintendo eShop. That said, looks aren’t everything and while the use of a charming filming technique and adorable writing do deliver, there are some slip ups in the gameplay that hold back this experience from being something truly special. 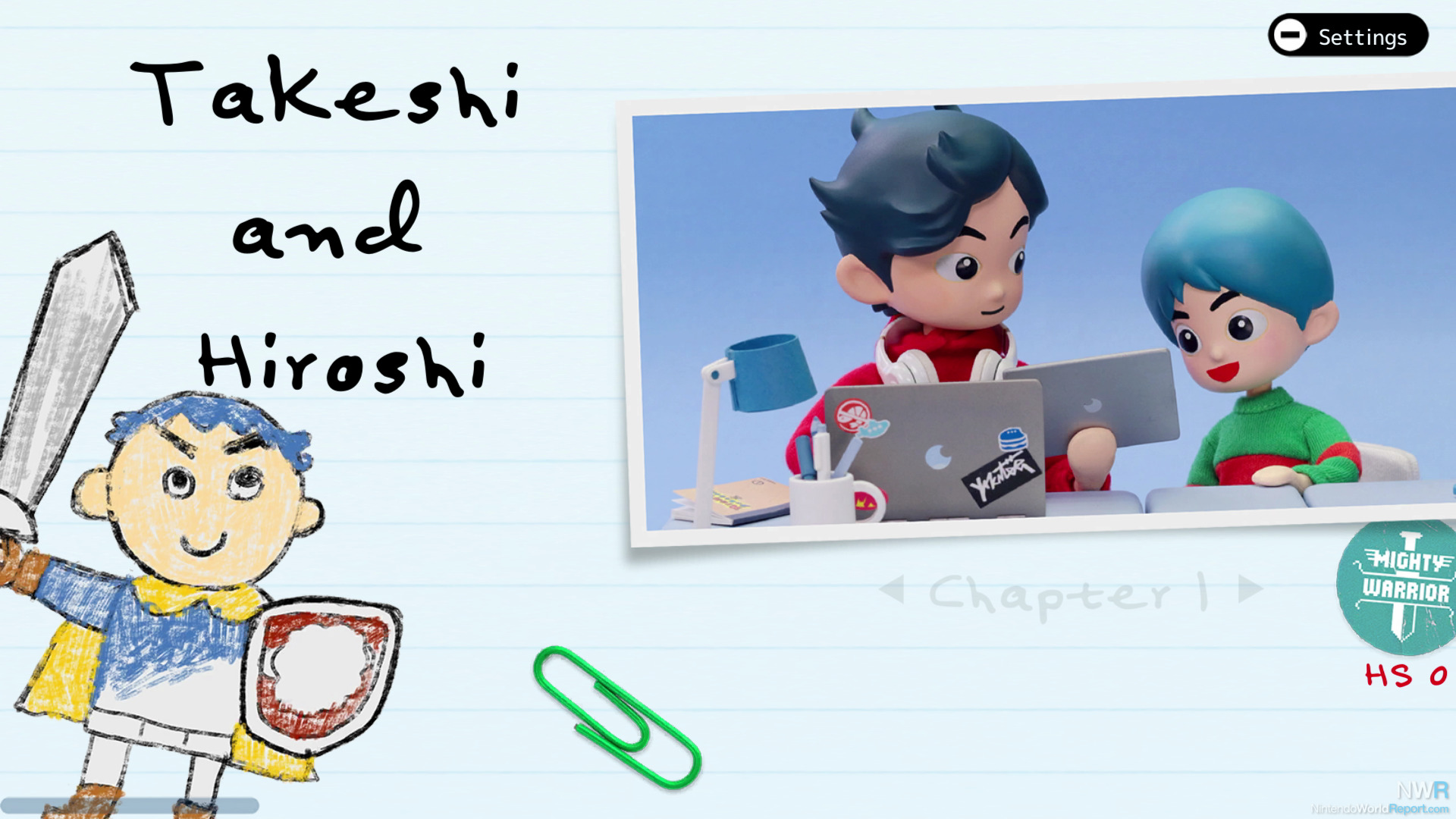 Takeshi and Hiroshi are siblings that share a strong brotherly bond. Takeshi is in middle school and has a keen interest in designing video games, and his younger brother Hiroshi is in elementary school, loves to play video games, and suffers from asthma, which leaves him hospitalized. Takeshi wants to encourage his younger brother and has him play his work-in-progress game, as he somehow manages to code it in real time. The story is very simple, but pleasant all around. The writing draws strong inspiration from traditional anime storytelling language, and the dialogue of the characters is endearing. My two and half hours with these characters wasn’t something that I expected to leave a lasting impression on me, but I did enjoy the story overall, even if it was pretty brisk. 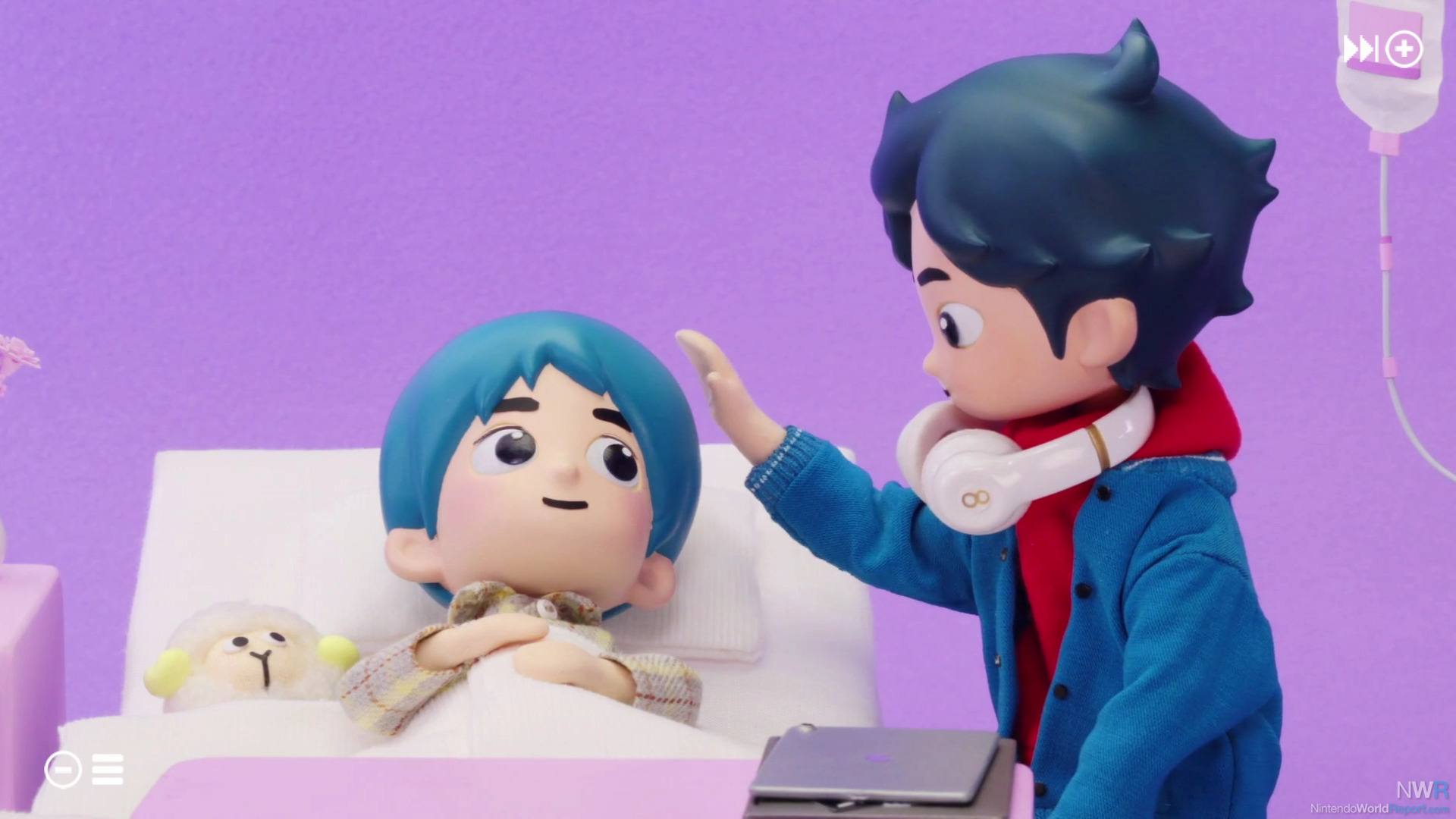 So what is the gameplay exactly? Whenever Hiroshi starts playing his brother’s game, this is when the player steps in. Takeshi’s game, “Mighty Warrior,” is an incredibly barebones and traditional RPG combat system, where you fight enemies in several rounds. It has a twist though. Rather than you encountering enemies, you actually pick from a pool of enemies to fight, each ranging in difficulty and ability. This is supposed to mimic Takeshi “coding” in enemies for his brother to fight in real time. The objective is to raise Hiroshi’s “joy” meter to a certain point depending on the level. To do this, you have to balance the types of enemies that Hiroshi fights. The harder the enemies, the more stressed he becomes. If Hiroshi is able to achieve victory, then the numeric value in the stress meter is added to the joy meter. If you send easy enemies, Hiroshi will be disappointed with how easy the game is and lose joy. If he successfully defeats a collection of hard enemies in a stressful situation, then he becomes more joyful. You only are given five rounds to strategically pick a line of ordered enemies for Hiroshi to fight. It’s a clever mechanic, but it is extremely limiting, to the point where success often felt random. There were instances where I was sending groups of enemies, that would result in a huge increase in joy, and then when trying to replicate my strategy, I would get wiped out completely. 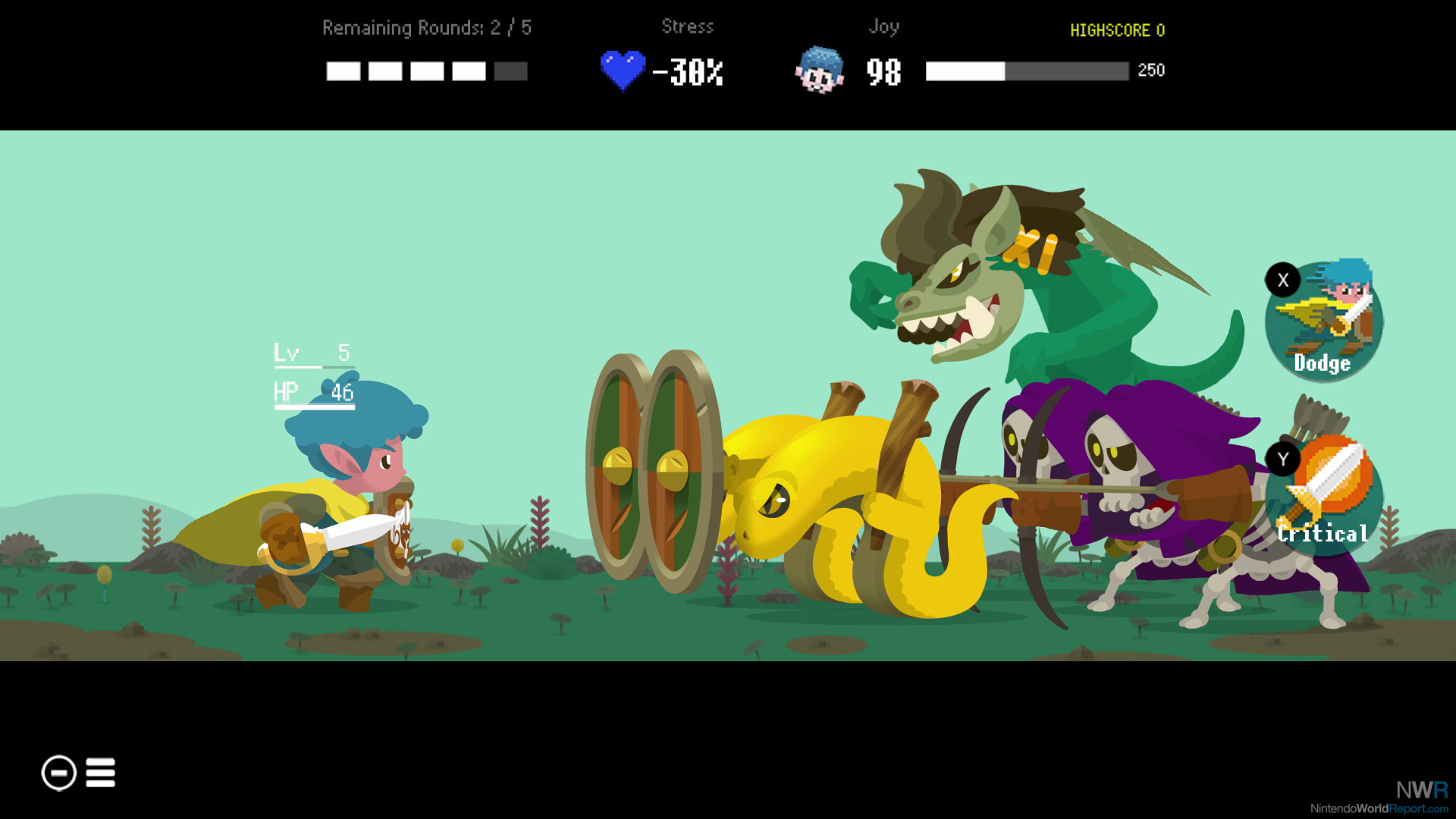 In a way, it’s like playing a game of cards: you have to deal with the deck and hands you are given. But you don’t have many choices. You can use a dodge move and even deal triple damage once per round after sending out enemies, but otherwise you’re a bit of a sitting duck. All of this adds up to a very inconsistent experience. Some fights took me over a half hour to get through via trial and error and luck, whereas the last chapter took just over ten minutes. It’s a flawed system that blemishes and overshadows the good. There’s one mini game called “500m Zombie Escape” that is largely optional, which actually outshines “Mighty Warrior.” And narratively, this actually makes sense. However, it doesn’t excuse the issues with “Mighty Warrior.” Essentially, “Zombie Escape” is an endless runner in 3D with an isometric view, where you are an endlessly pivoting character. You just press A to take one step forward while continuously spinning. The goal is to get as far as possible whilst surmounting the obstacles in your path, and it’s more a game of skill with learning the controls than anything. 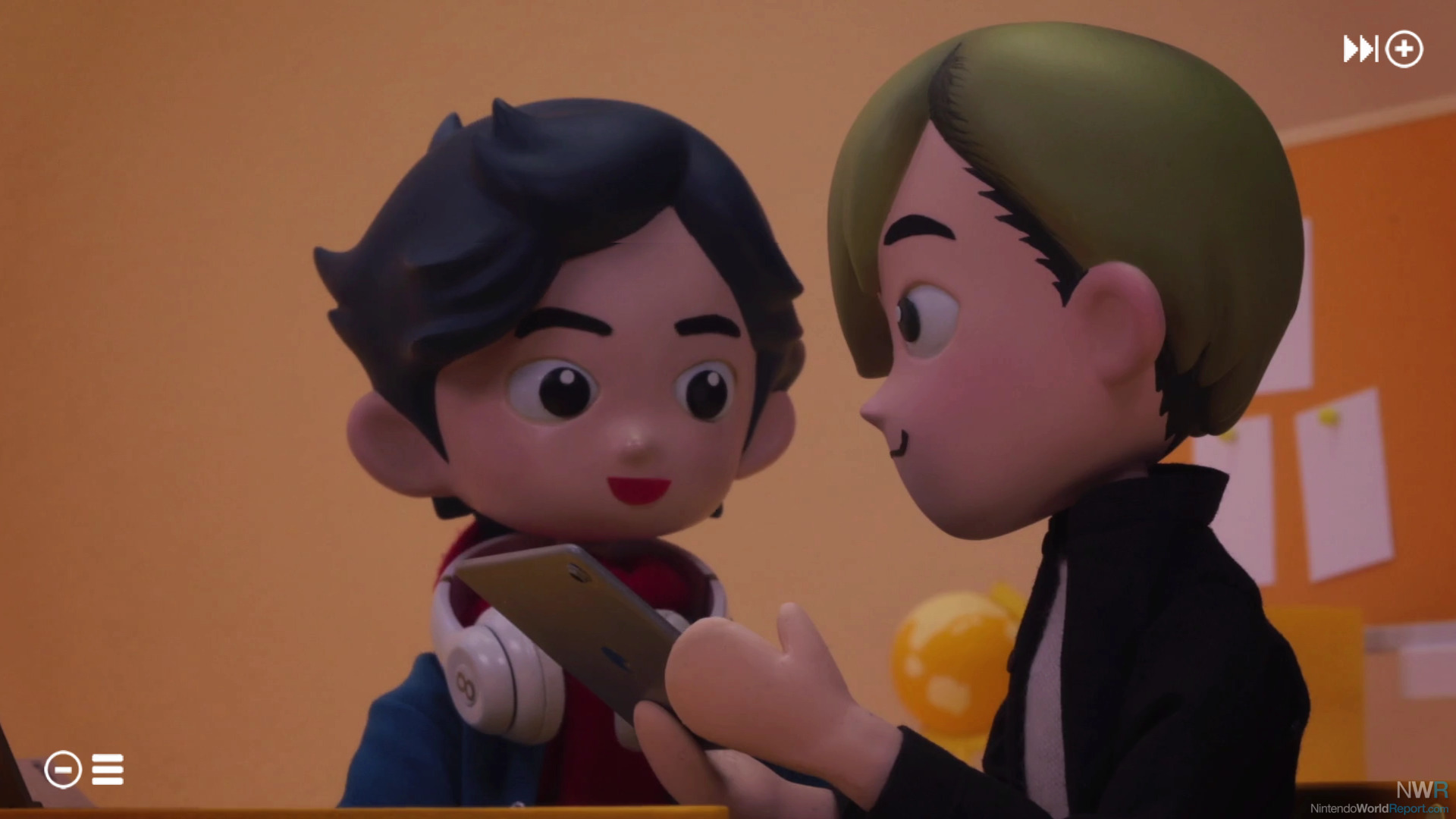 Like I mentioned before, the visuals of Takeshi and Hiroshi are what stand out the most. The puppeteering is very impressive, and while plenty of shots are reused, it never felt like overkill. The puppets are detailed but stylized so they aren’t realistic, and the designs of the characters stand out. The world these characters inhabit is interesting, too, because each shot has that world in a monochromatic, minimalist shot. The school is yellow, and is filled with yellow items, same with the purple hospital or the blue bedroom. It’s an interesting style choice that draws a little inspiration from a Rankin/Bass styled production. “Mighty Warrior” abandons the real puppets and opts instead for the now-common illustrated puppet animation. It’s not bad, but the style change is worth noting so that you don’t expect the entire game to be in stop motion.The music doesn’t stand out as much, but it’s definitely not trying to. It is very much supplemental to the experience, mostly being a mix of bells, a marimba, and occasionally a synthesizer. I won’t be humming any of these tunes later, but they work well in conjunction with the art style and animation. The one thing that did stick out like a sore thumb was that every so often, I noticed that some of the sound effects were considerably louder than anything else. There’s definitely a sound mixing issue present. Takeshi eating a donut, or the knight Hiroshi plays as will complete actions that were really distracting in how loud they were. You can turn off sound effects, but there isn’t an adjuster. It’s by no means a game breaker, but it has a noticeable effect on the experience. 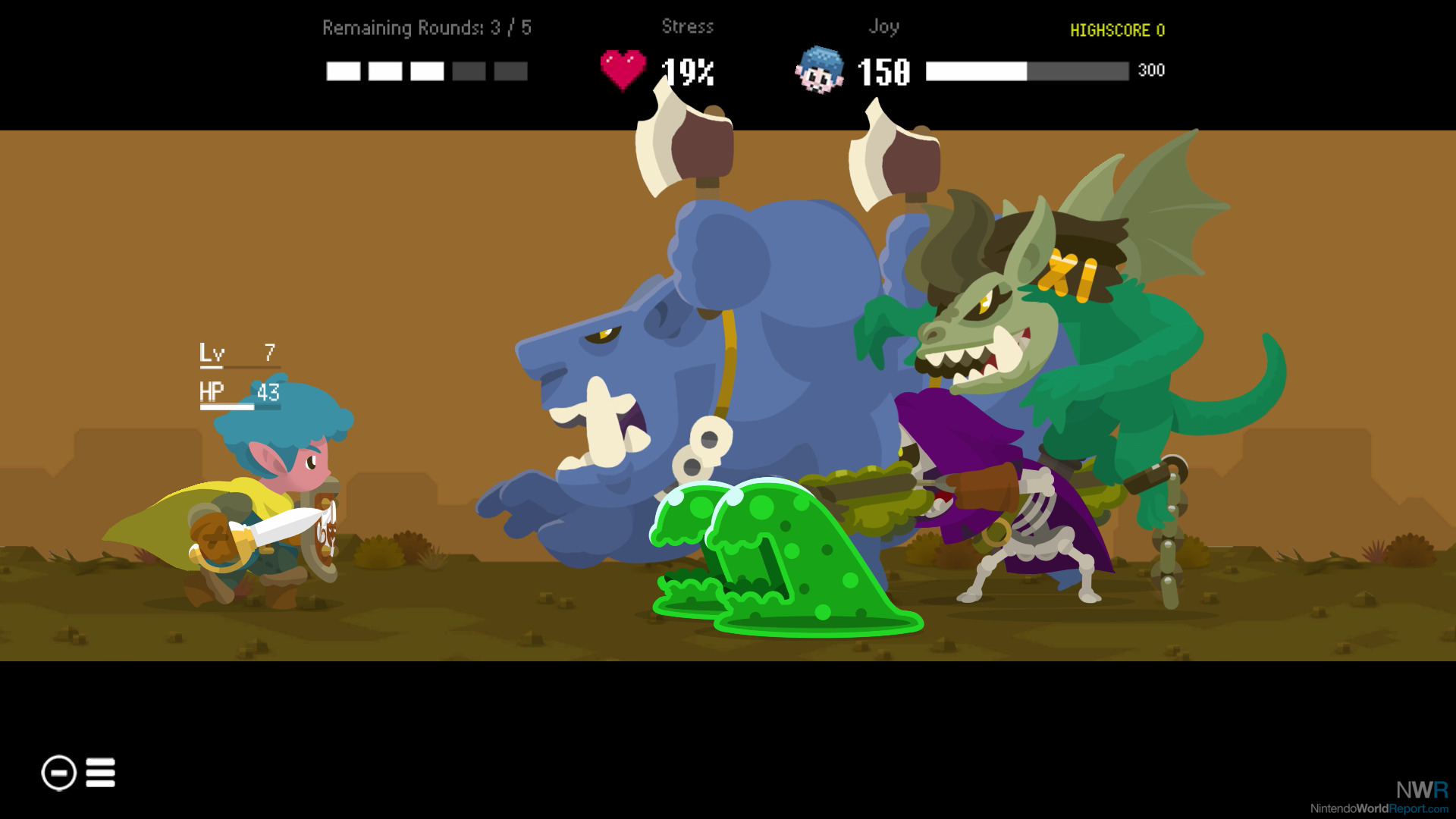 At the end of the day, though, I can say I enjoyed my short time with Takeshi and Hiroshi. It has some gameplay issues, and while the luck element of the barebones combat does make the experience drag at points, the novelty of the idea in the combat, as well as the impressive visuals in the story components are appreciated. 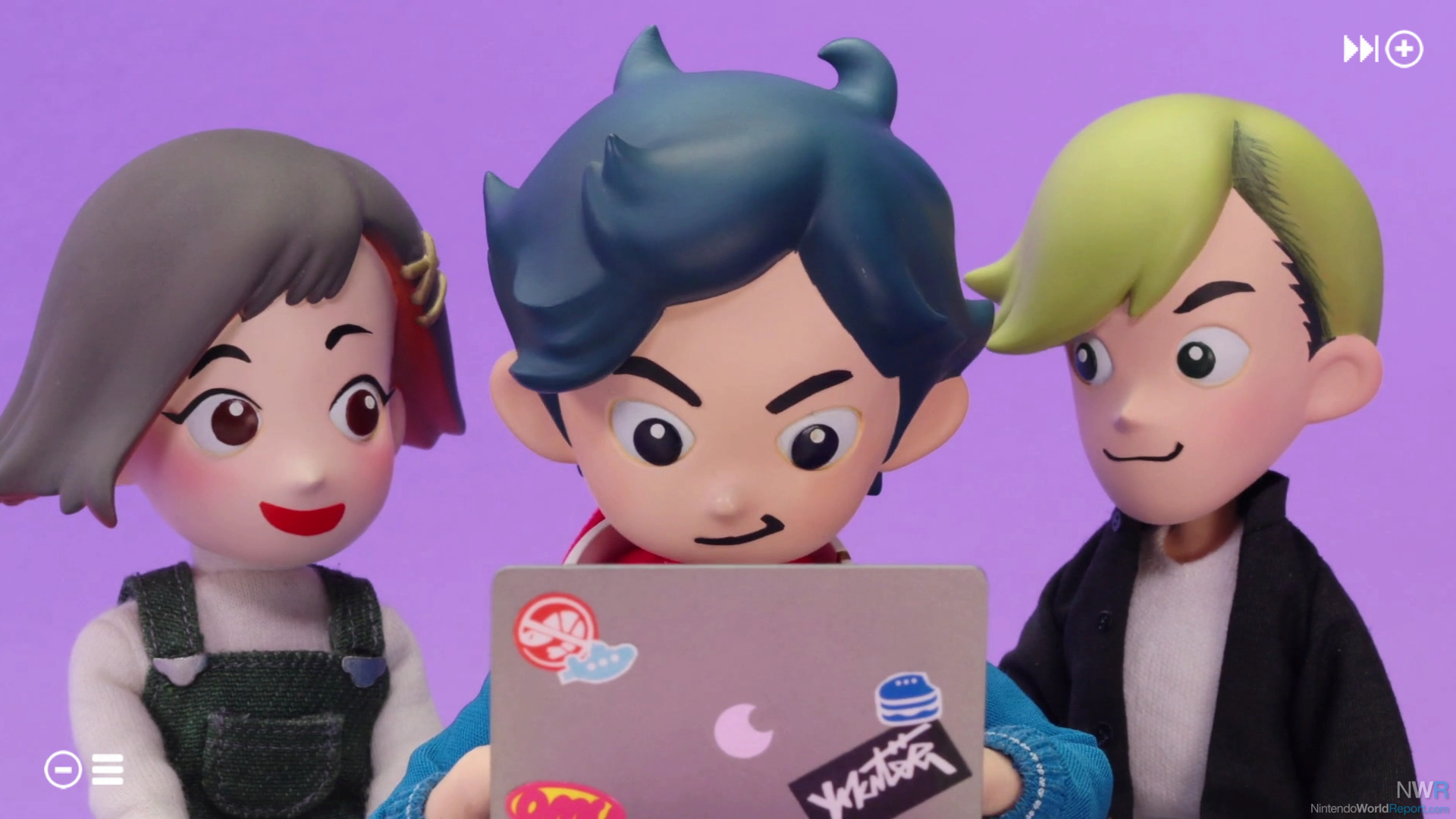 Thank you, it is now fixed.