A gritty, cyberpunk action-RPG that doles out punishment and interesting story-telling in equal measure.

From developer Dreadlocks comes Dex, a 2D action title with a healthy dose of RPG mechanics and non-linearity. It unquestionably wears its inspirations on its cybernetic sleeve; it’s impossible not to feel like you’re playing a blend of Fallout, Metroid, and Deus Ex. As you explore the setting of Harbor Prime, the map opens up and you meet its various denizens. The experience ends up feeling a little like a futuristic crime noir story as you engage in stealth, conversation, fisticuffs, and yes, even romance.

Titular protagonist Dex is being pursued by this game’s version of the nefarious mega corporation for her unique ability to hack cameras, computers, and even people without any cyber implants or equipment. Shortly after the game begins, you meet Decker and Tony, who direct you to main story quests and help you refine your hacking powers. While the primary plot involves discovering exactly who is after Dex and what they want with her, how your experience plays out is largely up to you. Harbor Prime is made up of about a dozen connected areas that feature shops, apartments, restaurants, clubs, and warehouses. While you can’t really talk to random NPCs, shop owners and named characters will often give you side missions to complete that reward you with money to spend, experience points, and tidbits that flesh out the world. 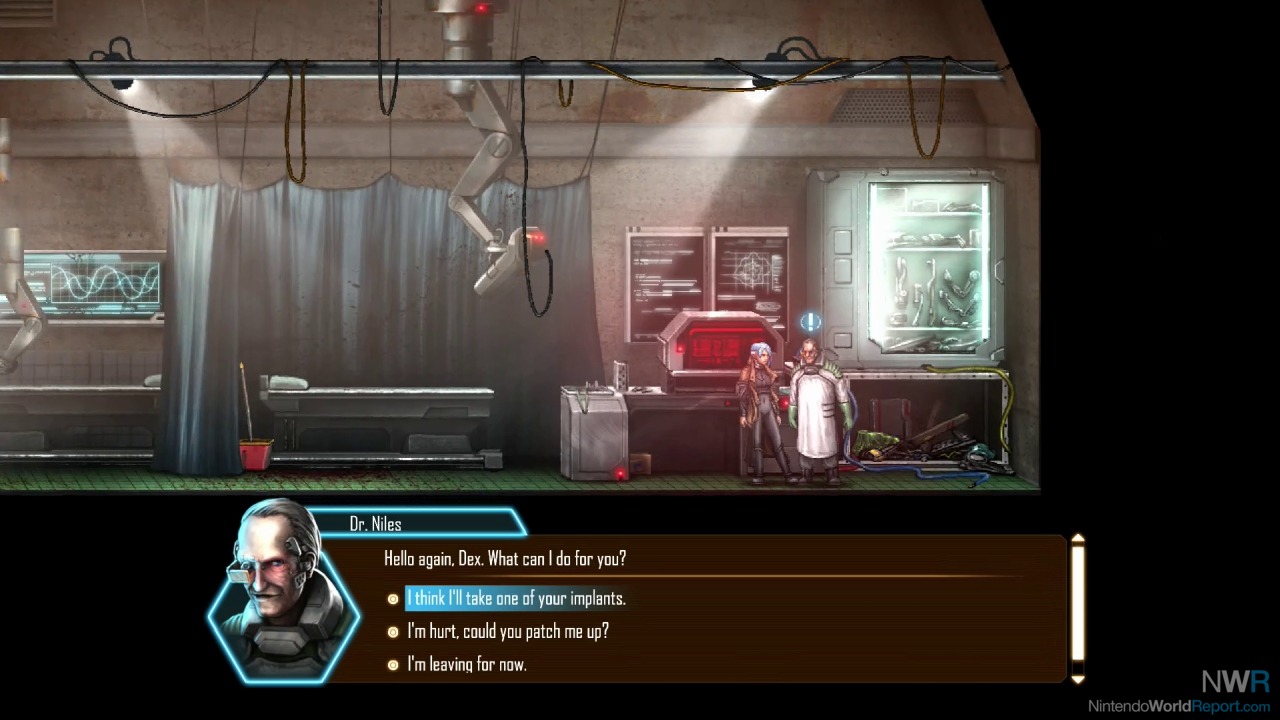 One of these sidequests involved placing a tracking device on a crate inside a warehouse, so that the character who gave it to me, a doctor named Niles, could stabilize the black market. The tracker allowed us to discover the hideout of the TruBody gang, which was in a neighboring district. With guns and fists blazing, I took out all of the thugs in their home base and then returned to Niles who rewarded me with discounts on the enhancements he was selling. It’s these diversions from the main story that are the most enjoyable aspect of the game, and I ended up completing almost every one of them during my playthrough. Fair warning, though, there aren’t really any quest markers or signposting, so you have to read the details of each assignment carefully.

Gameplay primarily takes the form of running, jumping, and punching a cavalcade of fairly generic looking enemies. One attacks with a whip, some have different guns, a particularly large fellow charges at you: all of them can be brought down through flurries of punches, jump kicks, and bullets from the variety of guns you can acquire. A percentage health meter appears under your foes as you strike them, but even the basic foot-soldiers can lay a beat down on you. Fortunately, health restoring items are quite plentiful, provided you level up your lockpicking ability, which I highly recommend. In terms of the light platforming in Dex, one annoying thing is that it’s not always clear where you can land and which ledges you can grab onto. On a dozen occasions, I would leap off a building to what I thought was another platform below only to fall to my death. Checkpoints mean you aren’t ever likely to lose too much progress, but a more frequent auto-save would have been appreciated. I recommend manually saving frequently, especially before entering an enemy stronghold or making a leap of faith. 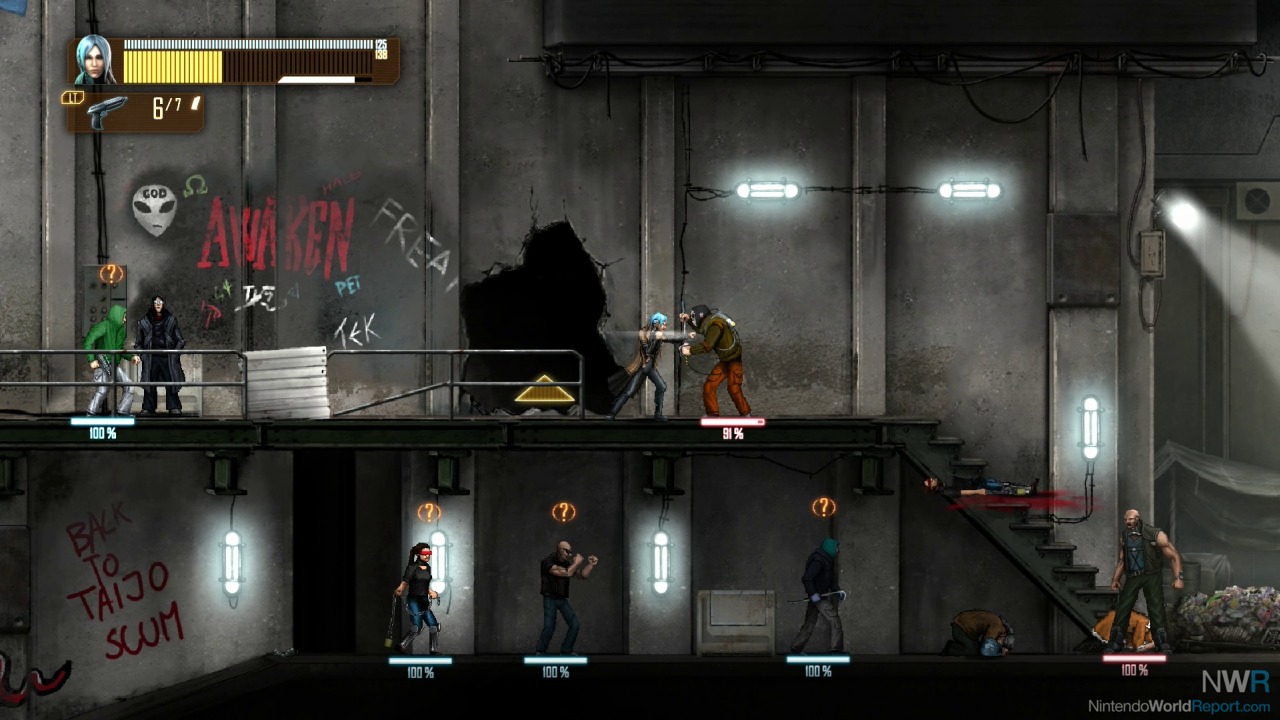 Speaking of leveling up, you have a handful of ways of options for the skill points you acquire with each level gained. You can improve your total health, your melee attack, your ranged weapons, your conversation ability, and your hacking prowess, among other things. Even if the early goings can be pretty challenging, once you get a hang of the controls and a few levels under your belt, taking down enemies becomes a little more manageable. It’s worth nothing that once you defeat them, they don’t respawn, so there is an incentive for clearing out an area and then scouring it to your heart’s content.

One recurring activity that Dex engages in is hacking, especially of computer terminals during side missions. Activating a hack begins a mini-game in which you control a floating blue orb that moves through a maze, shooting down turrets and destroying projectiles intent on removing your presence. Without items or upgrades, these sections can be incredibly frustrating as failure boots you out of the system and causes damage to Dex in the real world. Even though you can use a speed boost to maneuver around danger, eventually you will need to shoot down various barriers and obstacles in order to complete the hack and uncover files or shut down electronics in a nearby area. It’s vital that you save before you begin hacking and carry restorative items that you give the best chance of seeing the process through to the end. 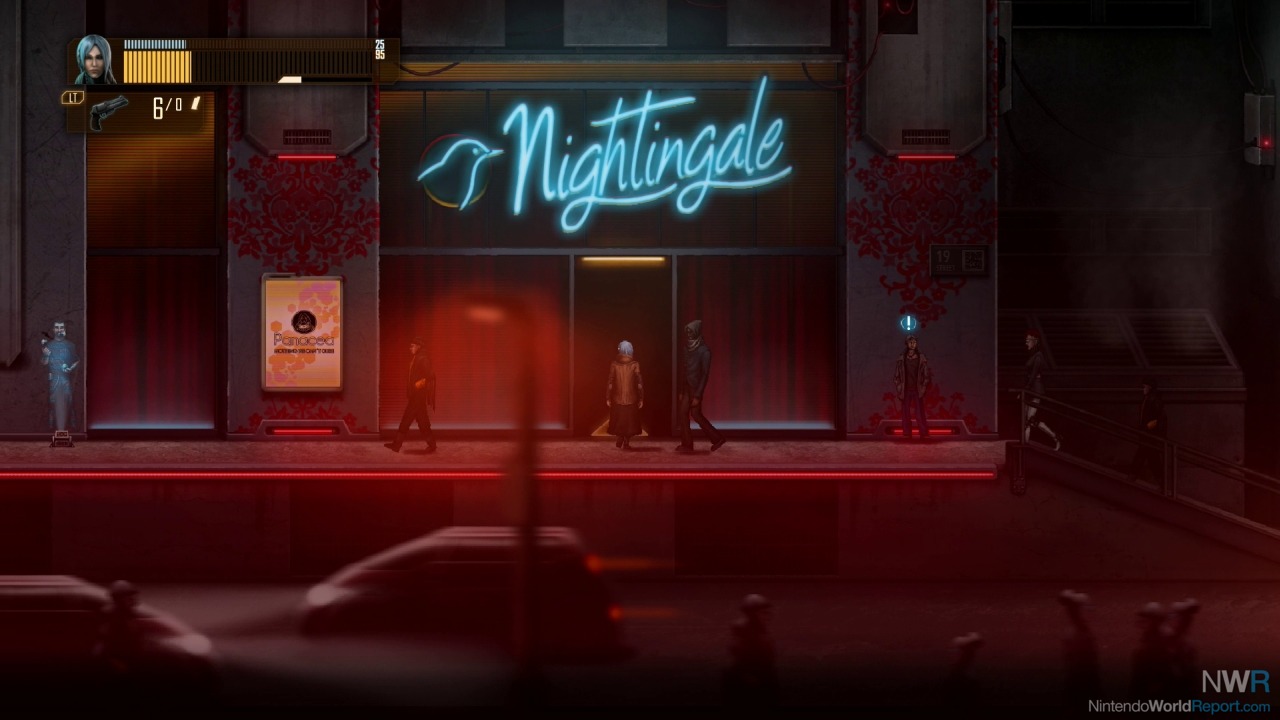 All dialogue is fully voice acted, and is done fairly well, too. The flip side of this is that the text is incredibly small, even when set to the largest font size, so you might be better off listening to what people say rather than reading it. Of course, you come across a fair number of emails and other communication that isn’t voiced, so prepare to squint if you play the game in handheld mode. The different areas of Harbor Prime do just enough to stand out on their own, but it would have been nice to see each one have a little more personality. Fortunately, most of the characters with whom you interact are unique and full of flavor.

As a game, Dex’s progression mechanics and choose-your-own-adventure style of exploration and story-telling make it an interesting and worthwhile diversion. The main story doesn’t achieve the greatest of heights, and the different possible endings are a little lackluster, but there’s enough substance in the journals, emails, and character interactions to push you all the way through. The combat could stand to be a little more engaging; as it is, it feels more like just a means to an end, but the shoot-’em-up like hacking mazes add satisfying, albeit challenging, depth. Greater accessibility options would have been a nice addition to the Switch port of this 2015 PC title, but it does enough to justify a space on your digital shelf if you’re a fan of 2D narrative-heavy action games or future-noir RPGs. Just don’t expect it to hold your cybernetic hand.